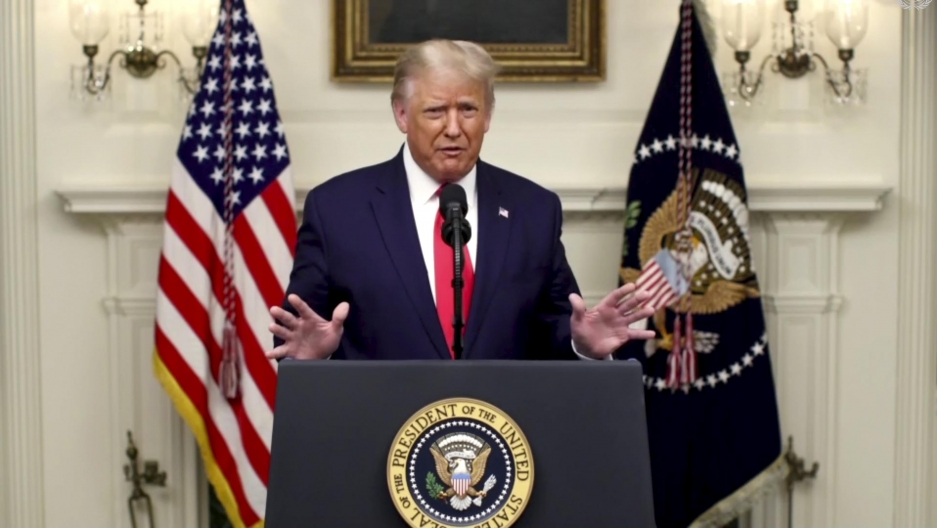 In this image made from UNTV video, US President Donald Trump speaks in a prerecorded message, which was played during the 75th session of the United Nations General Assembly, Sept. 22, 2020, at the United Nations headquarters in New York.

The annual United Nations General Assembly is a chance for world leaders to use a global platform to speak their minds — and perform a bit of theater.

This year, world leaders are speaking virtually due to the pandemic, with fewer opportunities to create true political drama. Tuesday's lineup included US President Donald Trump, along with the presidents of Brazil, China, Turkey, Russia and Iran.

The theme of this year's event was "The future we want, the United Nations we need: Reaffirming our collective commitment to multilateralism."

Trump, whose administration has pulled the US away from multilateral agreements, used part of his time Tuesday to talk about the coronavirus — and to attack China, a favorite target as he faces a reelection battle in November.

“We must hold accountable the nation which unleashed this plague onto the world, China,” he said in remarks taped on Monday and delivered remotely. “The Chinese government, and the World Health Organization — which is virtually controlled by China — falsely declared that there was no evidence of human-to-human transmission. Later, they falsely said people without symptoms would not spread the disease ... The United Nations must hold China accountable for their actions.”

Michael Green, a former National Security Council senior director for Asia, spoke to The World's host Marco Werman about Trump's remarks. Green is now a senior vice president for Asia at the Center for Strategic and International Studies.

Related: Italy is caught in the middle of the EU's tussle with China

Marco Werman: What did you think of Trump's criticism of China?

Michael Green: Today's speech struck me as intended to resonate with President Trump's political base at home, especially Fox News and the echo chamber for his presidential campaign. The speech was pitched in exactly the wrong way for countries in Western Europe, Japan, Korea, Australia and India who want to work with the US on the China problem. They don't trust China, but they don't like the unilateral approach that the Trump administration has taken. And today's speech pretty much doubled down on that unilateral approach.

You were an adviser to former President George W. Bush. In terms of just looking at China and how other US presidents have dealt with China, especially in an election year, do you see much difference?

Where I think the Trump administration deserves some credit is they're the first administration since, really, the 1970s to say that China is a strategic competitor. And the American people, the Congress, on a bipartisan basis, the Biden campaign and most of our close allies agree with that. Now, the question is, how do we work together to curtail China's most egregious behaviors, whether it's in Hong Kong or Xinjiang or on trade? And the answer is by working together. And unfortunately, the speech at the UN General Assembly was not about working together. It was really about blaming China in a way that even Japan or India that have fierce competition with China are not willing to sign up for it.

Related: Trump to block US downloads of TikTok, WeChat

When you were senior director for National Security under President George W. Bush, did you write the kind of speeches that he'd end up delivering at the UN General Assembly?

Yeah, we worked on them. But even a speech like this one for the UNGA, every part of the NSC that's got a stake in it would have the pen. So, I'm sure the people who do Asia policy for President Trump helped craft some of that language. And in their own comments out and about, they are pushing a very hard line. They are essentially suggesting that the Chinese Communist Party is irredeemable, you know, almost like the Soviet Union — that this only ends when the Chinese Communist Party is gone. That is a very stark difference from every previous administration. It's not entirely wrong, but it's not a policy that even our closest allies will sign on for. Nobody, not the Japanese, not the Taiwanese, the Indians. Nobody is signing on for a policy of regime change, of containing China until the Chinese Communist Party collapses. There's just too much intertwined trade and too many interests in working with China, even as people fear China.

How much does that worry you?

Chinese media is actually propagating the idea that President Trump is so overblown right now, he might create a war in the Taiwan Strait with China to save his election. That's Global Times and the somewhat more nationalist media. But it's been stunning to me how many Chinese scholars who I talked to, who are pretty level-headed, actually think it might be true that President Trump might actually want a war to save his election. And that has to be dangerous. And so that worries me a bit.

The other thing that worries me is that the Chinese leadership does not have a good finger on the pulse of the American leadership. We don't have a strategic dialogue. You know, President Bush was able to talk to his counterparts about any issue. Condoleezza Rice could travel to China. I went with her to sit down one-on-one with the Chinese leaders and conveyed President Bush's hopes and his concerns and his tough messages. President Obama had that with Hillary Clinton and the Chinese state councilor. We've always had these channels. We don't have them right now. It's not clear to the Chinese who speaks for President Trump on any given day. And it's very obvious that the Trump administration has very little communication or a channel to Beijing. That lack of a crisis management dialogue channel could get us in big trouble if we have an accident right now. And the rhetoric in today's speech certainly doesn't make it easier to establish that kind of channel.