If Venice makes you think of scenic canals and singing gondoliers, think, too, about how Venice was once a center of global trade. Goods from as far off as China would travel on the ancient Silk Road, in ships that would sail right up to the city’s San Marco Square.

That trade brought Venice wealth, ideas, innovations — and disease. The bubonic plague, which geneticists have traced to its origins in China, wiped out a third of Venice’s — and Europe’s — population in the mid-14th century. Venice’s innovation then was to isolate incoming travelers on islands until it was clear they weren’t infected. It was the dawn of the quarantine.

Now, in a new pandemic, Italy faces new challenges. Its economy was already in recession with high unemployment before COVID-19 hit this spring. In March 2019, disgruntled populists, skeptical that the European Union had much to offer Italy, led the way to make Italy the first G7 country to join China’s Belt and Road Initiative (BRI) — a global infrastructure initiative to build a belt of land routes and a maritime road of sea routes, in which Chinese loans and investments, and mostly Chinese state-owned companies, are building roads, railways, ports, pipelines, 5G networks and more around the world.

The hope was that joining the BRI would help Italy export more of its products to China, narrow its considerable trade gap and pull in new Chinese investment. China has already invested some $20 billion in Italy over the past 20 years. But that investment peaked four or five years before Italy joined the BRI. And significant new Chinese investment, or a new Chinese appetite for Italian exports, hasn’t exactly been pouring in since — certainly not this year amid a pandemic.

But Italy’s move closer to China, which the European Union calls “a systemic rival,” served as a wakeup call to the EU: If it doesn’t help member economies when they’re feeling economic pain, they could come up with solutions that may not be in the EU’s strategic interests. When Italy’s economy reeled under COVID-19, the EU offered Italy help: more than $200 billion in cheap loans and grants from the EU’s coronavirus recovery plan, an outsized share of the $890 billion total available in the fund.

The EU appeared to be applying a lesson learned during the 2008 financial crisis. At the time, it insisted that an already suffering Greece undergo austerity measures. Instead of being squeezed indefinitely, Greece accepted investment from the Chinese state-owned China Ocean Shipping Company (COSCO) to manage, and eventually buy, a majority stake in Greece’s storied ancient port of Piraeus, which also happens to be one of Europe’s most strategically located ports. COSCO’s investment has helped transform Piraeus into the busiest port in the Mediterranean.

Chinese investments in the Italian ports of Genoa and Trieste were mentioned in the memorandum of understanding Italy signed when it joined China’s BRI last year, a fact that got some Europeans speculating about whether a Chinese presence in those ports would be a Trojan horse for China to dominate central Europe.

Michele Geraci is an Italian economist who, as Italy’s undersecretary of economic development at the time, was instrumental in moving Italy to join the BRI. He dismisses such concerns as overblown, given how many European ports China already manages or owns.

“When we hear warnings that Chinese should not invest in the Italian ports, it’s too late. China has already invested in all major European ports and almost manages 15 to 20% of European traffic.”

“We have Bilbao, Valencia, Antwerp in Belgium, Zeebrugge, Piraeus in Greece of course, Dunkirk, Le Havre, Marseilles, Nantes in France, Malta, Rotterdam in the Netherlands,” he says. “So when we hear warnings that Chinese should not invest in the Italian ports, it’s too late. China has already invested in all major European ports and almost manages 15 to 20% of European traffic.” 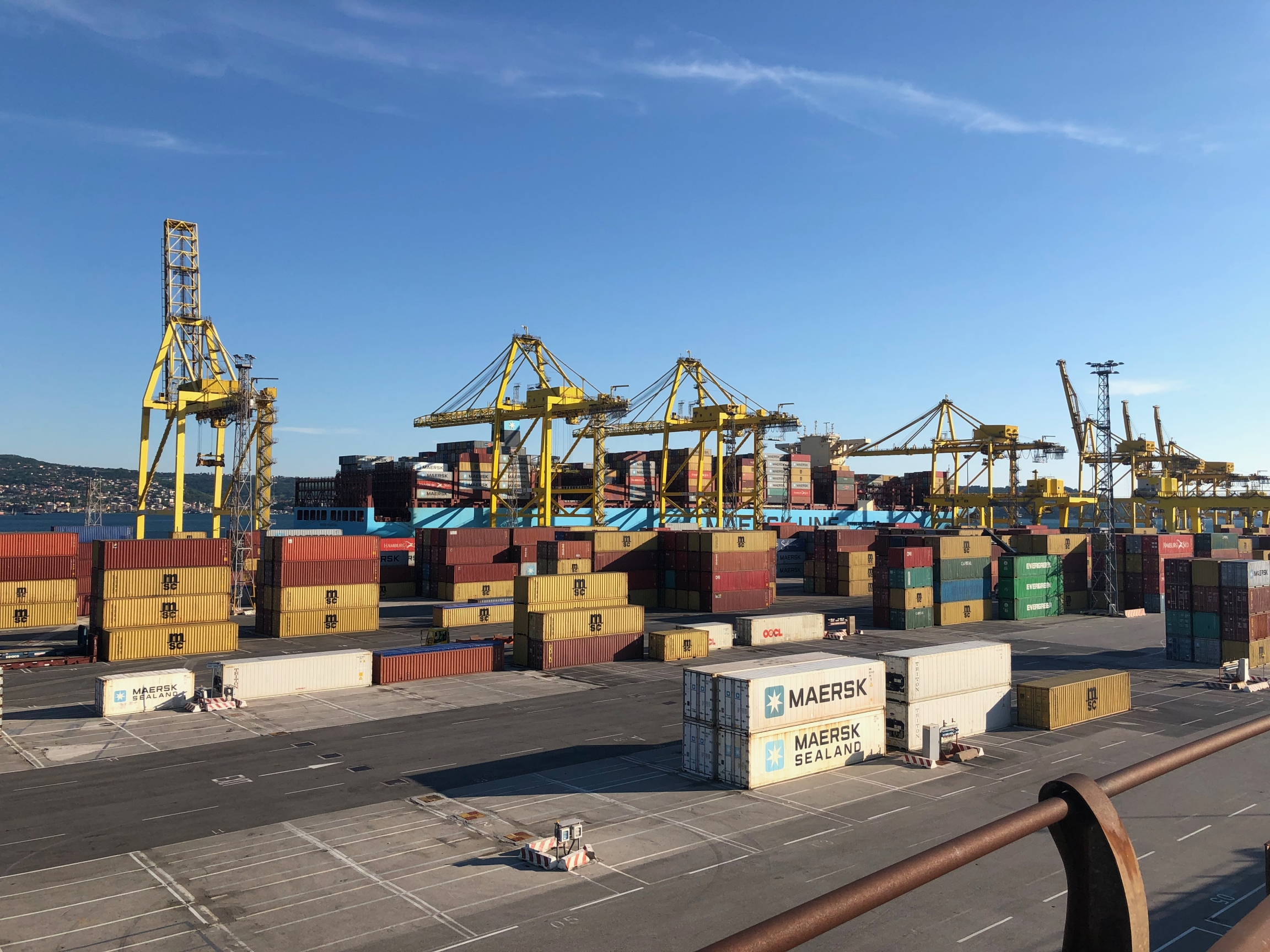 The container port in Trieste, Italy.

The challenge, he says, should be for Italians to figure out how to make Chinese investment work for Italy’s interests.

And in Trieste, a picturesque city rising above the Adriatic Sea, with a port going back to the Roman Empire, and a free port for 300 years, port president Zeno D’Agostino sees great opportunity.

“We must try to use this opportunity, which is to be a node in world logistics,” he says.

D’Agostino says he’s been working with Chinese partners to get more Italian exports to eastern China. He’s looking to develop areas of Trieste’s free port, with factories and warehouses to take advantage of its free trade status — only paying duty on goods when they leave the warehouses.

He’d been expecting this kind of investment from the Chinese. But while that’s been slow to come, the publicity that came to Trieste when Italy joined China’s BRI has drawn in more European investors.

“I don’t need the money of the Chinese, I can tell you, without problem,” D’Agostino says. “So if we do what we agreed, we are both satisfied. If they do what they want, and it’s something different from what we agreed, we cannot do [it].”

Italy’s “Golden Power” rules prohibit the sale of ports and other strategic assets to foreign entities.

Back in Venice, the head of its modern Marghera Port, Pino Musolino, says it’s a good thing Italy has those restrictions because China has proven adept at establishing a presence at strategic ports all the way from China to Europe.

“The Belt and Road [Initiative] is not just about infrastructure,” he says. “It's a huge design aimed at controlling trade flows and controlling the main global value chains. If you control those, you don't need to control any army anymore. You are controlling the very specific wealth of any country along those economical corridors. Chinese are very much aware of this, and they are doing a very good job on this, honestly. And they are also very straight forward on this, I have to say, I don't see them particularly scheming on this. They have a clear goal and they are pursuing it.”

Italy’s government, made up of the anti-establishment Five Star Movement and the center-left Democratic Party, is working out its own goals for what they expect to be an economic bounce next year, after Italy’s economy contracts 8 to 9% this year. There’s talk of upgrading train lines and creating a fast broadband network. China’s Huawei had been in the running. Italy’s leaders have since reconsidered using them, citing security concerns.