Chinese President Xi Jinping’s visit to Almaty, Kazakhstan’s capital, in 2013, seemed like another boring meeting worth skipping, according to Dulat Yesnazar, then a college student studying international relations. Xi had come to announce the launch of one of the most sweeping global infrastructure initiatives in history.

“I thought it was just another of those programs where you just talk much and do nothing — or do little,” Yesnazar said.

Now, as a journalist, Dulat sees China’s new Silk Road — also called the Belt and Road Initiative — as an effort to extend its reach and its power.

“It’s just part of China’s ambitions, big ambitions, of being hegemon,” he says.

The Belt and Road Initiative, rolled out by the Chinese government in 2013, aims to build a belt of land and sea routes that stretches from East Asia to Europe, spanning some 70 countries. Kazakhstan has called itself a buckle in that belt, echoing the centuries on the ancient Silk Road when Kazakhstan was at the crossroads for caravans of traders from China, India, Persia, Turkey, and beyond. But many Kazakhs are skeptical of China’s intentions and its promises to make the new Silk Road a “win-win” for both countries.

In recent years, protests have erupted in Kazakhstan against Chinese workers taking jobs Kazakhs can do, or over what some see as increasing Chinese political influence in Kazakhstan.

Protesters pressured the Kazakh government to be more transparent about the nature of Chinese investments. Finally, in 2019, the government released data showing 55 Kazakh projects are receiving Chinese new Silk Road investment and loans totaling $27.6 billion, with approximatley of half going toward oil and gas-related projects. Some protesters have called for some of those projects to be scrapped.

But other Kazakhs see the Belt and Road Initiative as an opportunity to help Kazakhstan’s economy, and to get investments that weren’t so easy for Kazakhs to land elsewhere.

Almas Chukin, an entrepreneur in Almaty, says he landed a Chinese investment for a wind energy project in Kazakhstan he’d been trying to do for a decade.

“We traveled to the United State a few times, but when the first question was, ‘Where is Kazakhstan?’ you understand they’re not going to give you money.”

“We traveled to the United State a few times, but when the first question was, ‘Where is Kazakhstan?’ you understand they’re not going to give you money,” he says with a chuckle.

He ticks off his next stops: London? Nope. Paris? Not interested. Turkey? “More words than deeds,” he says. 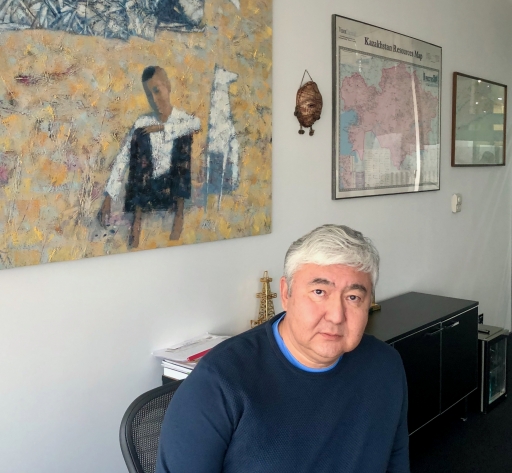 Almas Chukin, an entrepreneur who got Chinese funding for Kazakhstan’s first major wind energy projects after US and European potential investors turned him down.

“And with China, we finally got the project,” he says.

The result, he says, will be Kazakhstan’s first major wind energy project at a time when the Kazakh government has committed to moving toward using more renewable energy.

Chinese investment is also helping to transform Kazakhstan’s border with China. On the Kazakh side, there’s now a new dry port where companies load containers onto trains, with plans for much more. And in a new free trade zone on both sides of the border, a new Chinese city has sprung up in Khorgos, where a dusty trading town used to be. Kazakh shoppers come in by the busload to snap up bargains and sell them for a profit back home.

“Business is good and getting better,” says Li Xin, a Chinese shop owner in Khorgos who sells handbags and other women’s accessories, who came from northeastern China’s Heilongjiang province. “I didn’t know much about this place, or about the Belt and Road, before I came here. But I’m glad I did.”

Li says she thinks she’s here to stay, and she hopes the Belt and Road strengthens relations between Kazakhs and Chinese. She says she hopes the two sides can learn to communicate better. Unintentionally illustrating the challenge, she calls Kazakhs mao zi, the Pinyin spelling of a somewhat derogatory term in Chinese for “Russian.”

When it comes to cultural understanding across the border, the easiest cultural understanding may be between Kazakhs, most of whom are Muslim, and Uighurs, the Turkic Muslim population that, until recently, had been the majority in Xinjiang — the region of China that abuts Kazakhstan. When China’s Communist Party came to power in 1949, it encouraged Han Chinese — the ethnic majority in China — to move to Xinjiang and tame China’s wild west. Uighurs are now a minority in Xinjiang.

And over the past three years, Chinese officials have forced hundreds of thousands of Uighur and ethnic Kazakh Muslims into so-called "reeducation camps" and other forms of detention. Chinese officials insist these measures are necessary to prevent extremism, terrorism and separatism.

Detainees who have been released tell of being beaten, made to eat pork — against usual Islamic practice — and to recite propaganda.

“Every day, we’d spend 45 minutes learning Chinese and glorifying the Communist Party and President Xi Jinping,” says Gulzira Auelkhan, who was detained for 15 months. An ethnic Kazakh, she was born in Xinjiang as a Chinese citizen, married a Kazakh man, and moved to Kazakhstan. She was detained at the Kazakhstan-China border on her way home to Xinjiang to visit her sick father. 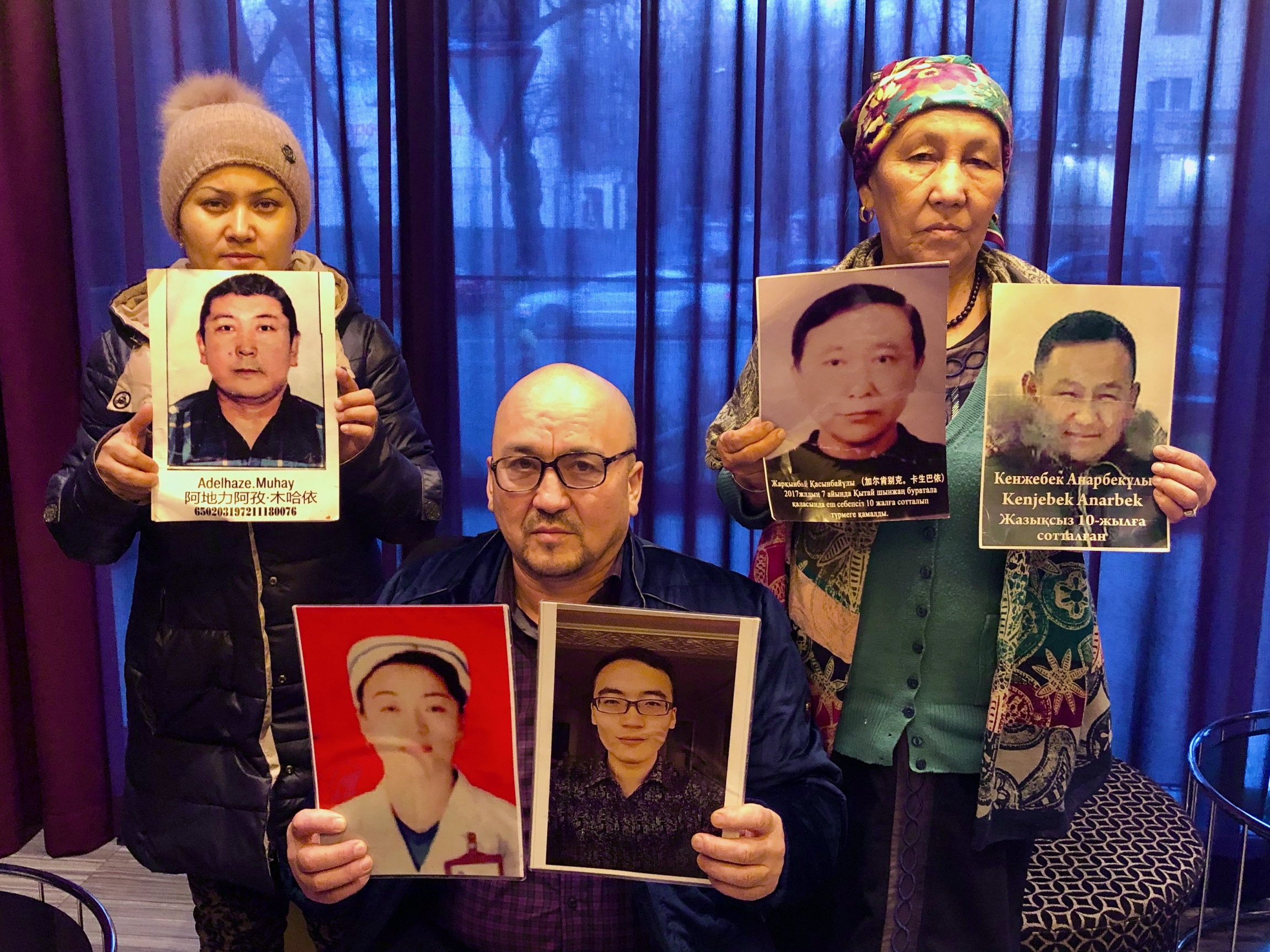 Kazakhs in Almaty hold up photos of their relatives being held in detention in Xinjiang, China.

Kazakhs in Almaty hold up photos of their relatives being held in detention in Xinjiang, China.

Auelkhan’s husband was eventually able to bring her home to Kazakhstan — but not before she’d completed a stretch of forced labor, making gloves for export to Germany and the US. Her experience did nothing to sell her on the win-win promises China makes about the new Silk Road.

“I don’t believe that Kazakhstan and China are friends. ... I think this project is part of China’s expansion. I think they’re trying to take over other countries.”

“I don’t believe that Kazakhstan and China are friends,” she says. “I think this project is part of China’s expansion. I think they’re trying to take over other countries.”

And, she says, it seems they want to “erase Islam” within China’s borders.

Kazakhstan’s leaders are left to balance between the potential economic windfall of strengthening economic ties with China under the New Silk Road, and many Kazakhs’ desire to protect their sovereignty, culture, and religious preferences, as they watch with concern the way Chinese authorities are treating Muslims just across the border.

“It’s extremely destructive, because they’re creating this horrible node for just decades to come,” says Gene Bunin, an Almaty-based scholar of the Uighur language, who created an online database of detainees called shahit.biz.  “You’re just going to have a lot of broken people who don’t know what to do with their frustrations.”