If you’re looking for some joy in the world, go find a ukulele player. They are unfailingly chipper, even during a global pandemic.

Last week, about 140 ukulele aficionados from around the globe gathered online for UkeFest, an annual confab hosted by the Music Center at Strathmore in Bethesda, Maryland. They took to Zoom out of love for the four-stringed, guitarlike instrument adapted from the instruments Portuguese immigrants brought to Hawaii in the 19th century.

“The ukulele is a happy instrument,” said Bryan Tolentino, a retired postal worker and professional ukulele musician and teacher. “There aren’t too many angry people who play the ukulele.” 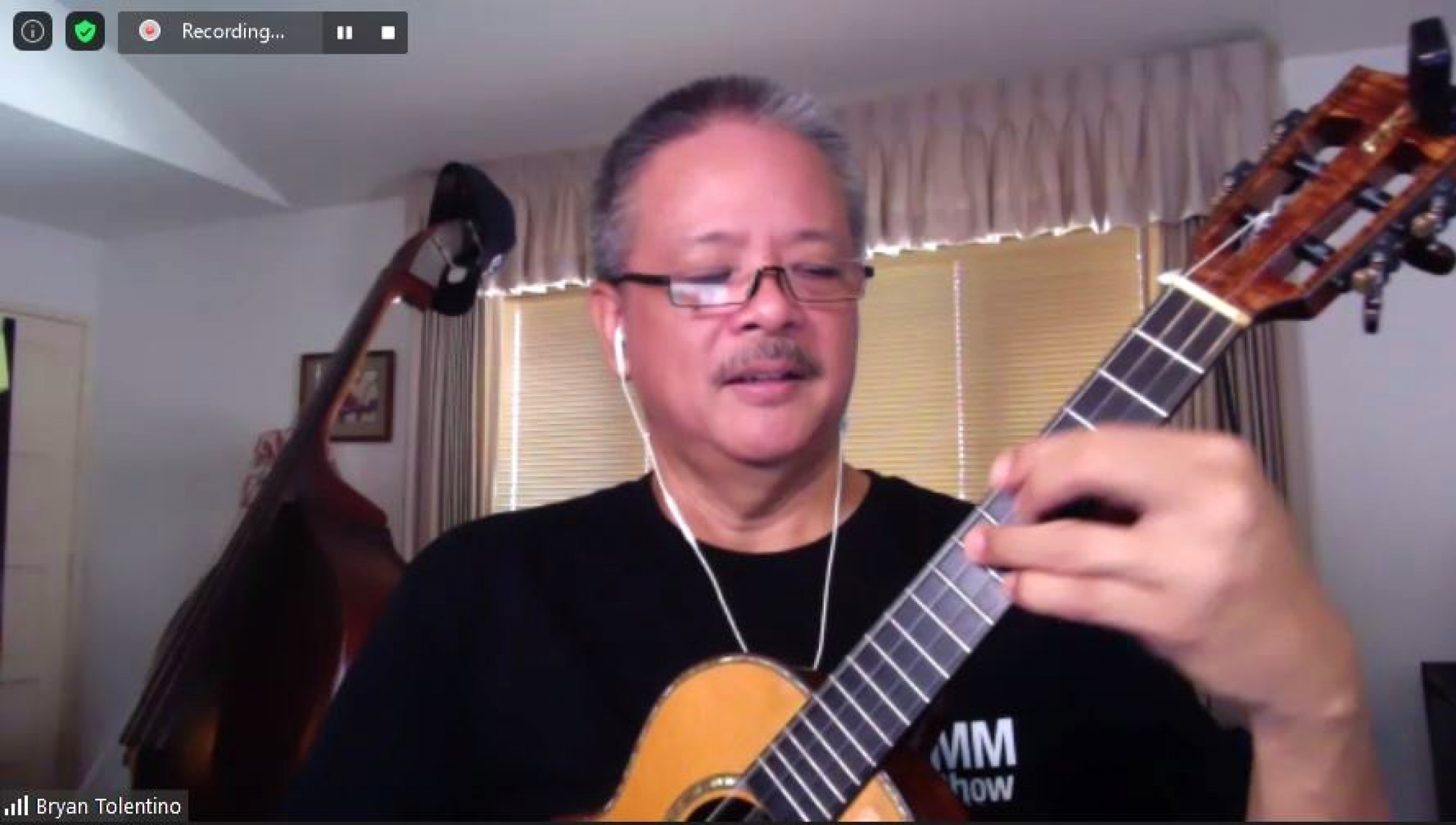 A Zoom screenshot of ukulele teacher Brian Tolentino playing “Somewhere Over the Rainbow.”

Tolentino typically flies to Maryland from his home in Hawaii for UkeFest. But this year, he taught his advanced classes from Oahu. In keeping with the spirit of a ukulele player, he greeted the 2020 event change with a smile.

“We can connect with people all over the world, which is fun,” he said. “A C in my language is a C in Japan, is a C in Switzerland.”

Never mind the fact that — thanks to the time change between Hawaii and Maryland — he had to get up at 4 a.m. to teach.

UkeFest started in 2008 as a concert and workshop near Washington, DC. Two women spearheaded its development: Marcy Marxer and Cathy Fink, a couple and Grammy-winning musical duo.

Creating a musical community that would welcome everyone had long been a priority for Marxer. Over the years, she watched as the UkeFest audience grew from mostly Marylanders to a more international crowd of people interested in sharing their musical traditions.

“Kathy and I, as a gay couple, were not automatically welcomed into the field of bluegrass,” she said. “The [ukulele] community is not a competitive community. It’s really one of encouragement, bringing people in, jamming on any songs anybody wants to play.”

The [ukulele] community is not a competitive community. It’s really one of encouragement, bringing people in, jamming on any songs anybody wants to play.

The event eventually helped spawn one of the more robust ukulele communities outside of Hawaii.

Related: For this year's Passover Seder, to Zoom or not to Zoom?

Teko Ishida, a translator from Tokyo, was first attracted to the ukulele because of its significance to Hawaiian culture, which is very popular in Japan. He soon became active in his city’s ukulele scene and started playing around with rock, blues and jazz.

“There’s always this positive vibe and sweetness to it,” he said.

Ishida traveled to UkeFest three years ago, but he hadn’t been able to make the long trip to the US since then. For him, a virtual festival meant he could finally participate again.

When the pandemic hit, Perine immediately thought of UkeFest. Would they cancel?

“I was kind of biting my nails,” she said. 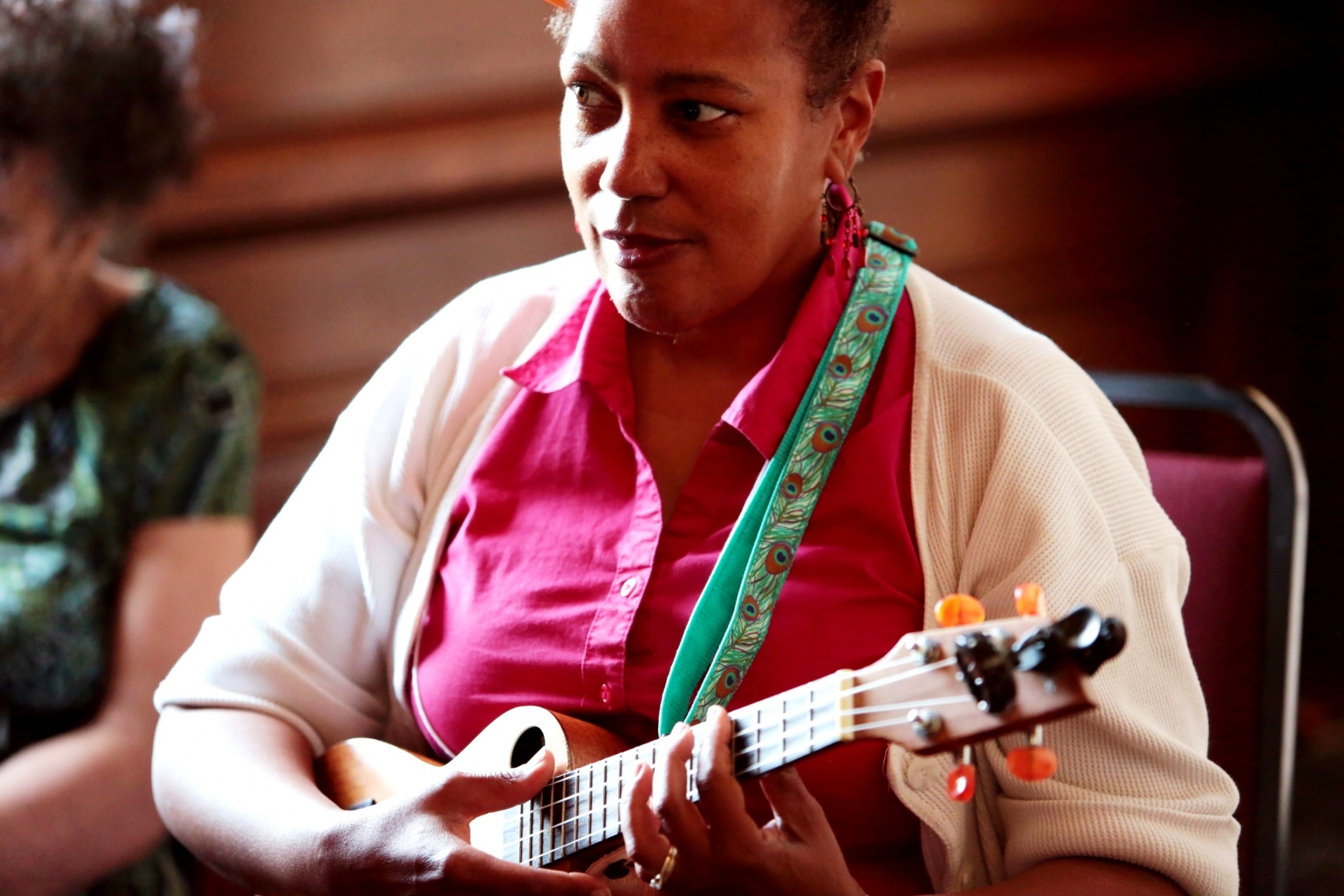 Maryland ukulele player Lori Perine, who has been attending UkeFest for about 8 years.

The Music Center at Strathmore

The organizing team quickly pivoted to an online model, though they did reduce the number of instruction days to avoid attendee Zoom fatigue. And despite their best efforts, there was just no perfect way to re-create the magic of an in-person jam session online.

True to form, ukulele players still found a silver lining. In normal times, overenthusiastic ukulele players often unintentionally interrupt lessons by messing around on their instruments — noodling, they call it. But during the Zoom lessons, everyone except the instructor was muted.

With everyone on mute, the noodlers could noodle to their heart’s content.