Since my family and I moved from Argentina to the US in 1998, my two brothers and I often wondered what we’d do when — and if — we got married. Do we ask our Argentine relatives to travel? Do we ask our American friends to travel to Argentina? Do we get married ... twice?

We could’ve never imagined that a pandemic would eventually decide that for us. At least for one of us: my brother, Santi, who married his Russian girlfriend, Genia, on July 31. The only people present were my parents, at their home in Austin. Even the justice of the peace, also in Austin — participated virtually. 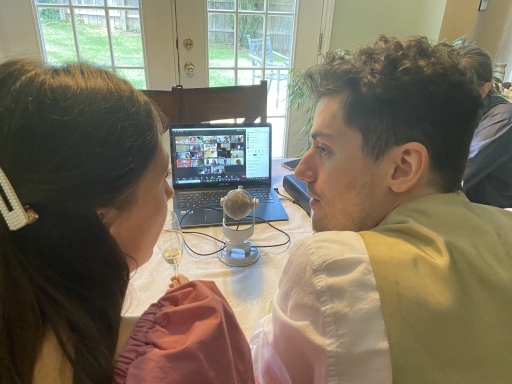 Santiago and Genia set up for the Zoom wedding.

“Welcome everyone who is attending today,” she announced after all the guests had logged on. “I hear we’ve got a wonderful group of family and friends. And I have been experiencing some beautiful 21st-century weddings with Zoom.”

There were attendees in multiple time zones: friends and family in Argentina, Croatia, Spain, Italy, France, Turkey, Russia, Kazakhstan, Singapore, Canada and various US states. The image of 30 little squares containing different faces, in an array of living rooms and kitchens, was overwhelming. Any time someone spoke, everybody else could hear.

And not everyone spoke the same language, either. When the justice of the peace explained what the online ceremony would be like — a new experience to nearly everyone attending — she allowed time for two kinds of translation: one from English to Russian, done by Genia, and another from English to Spanish, done by my brother, Santi.

But it was clear that the vows themselves needed no translation.

The guests were unmuted after the justice of the peace pronounced Santi and Genia husband and wife — just in time to flood the Zoom call with a cacophony of cheer. Our Argentine family shouted, in Spanish, vivan los novios or “long live the newlyweds.” And Genia’s Russian relatives chanted gorka — which, I learned that day, means the couple has to kiss every time it’s said. 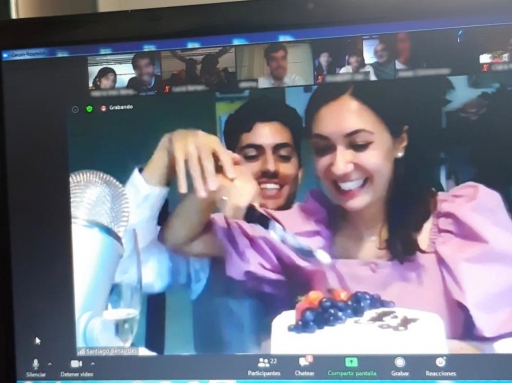 Santiago and Genia celebrate by slicing their wedding cake during their Zoom wedding.

At one point, someone picked up a violin and played Felix Mendelssohn's “Wedding March.”

I’m still unsure who it was because it was too hard to keep up with who was doing what.

After the initial champagne popping, the celebration continued for three hours; there were nonstop speeches, maybe the most I’ve ever heard at any wedding. People looked on and listened  — or waited for a translation — and sometimes cried, poured more champagne, or got up to deal with a whining child in the next room. There were even a few musical performances.

But, realistically, that kind of celebration wouldn’t have been possible, regardless of a pandemic. It’s just part of life when your loved ones are spread across the globe.

This was perhaps the only way to really have everyone present.