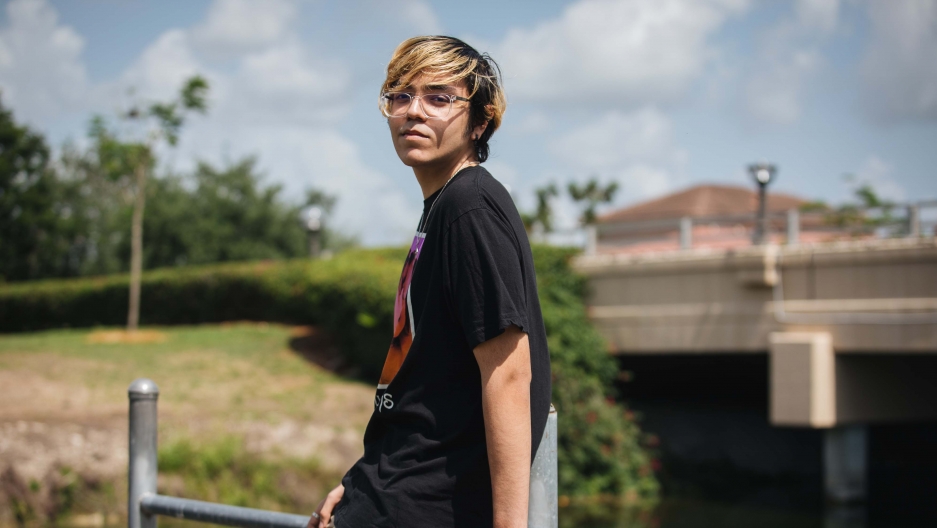 Jacob Cuenca, 18, a registered Republican, poses outside his home in Homestead, Florida, May 21, 2020.

“Literally everything was fine, you know, I was going to school, worrying about my math test, and all of a sudden there's no school for, like, three months,” he said. “We had no prom night, no senior brunches.”

Cuenca, who is 18, now finds himself in a kind of purgatory in between high school and college, stuck at home in a town just south of Miami, one of the nation's epicenters for the coronavirus. He graduated from high school but has chosen to delay his freshman year at the University of Denver in Colorado for at least one semester to avoid some of the disruption brought on by the pandemic.

Politically, Cuenca finds himself in a kind of purgatory as well. He registered to vote for the first time in March as a Republican. He considered himself a reluctant supporter of Republican President Donald Trump.

But the pandemic has shaken up Cuenca’s politics, too. Trump’s handling of the pandemic has made him reconsider his support for the president. Instead, Cuenca has become a hesitant supporter of presumed Democratic nominee Joe Biden.

His journey offers a snapshot into the psyche of a first-time Latino voter in Florida, a must-win swing state.

“I think Joe Biden and Trump are both pretty bad people. But if I had to choose a lesser evil it would be Joe Biden.”

“I think Joe Biden and Trump are both pretty bad people,” Cuenca said. “But if I had to choose a lesser evil it would be Joe Biden.”

The problem with Biden is that he’s old, out of touch, and will say anything to get elected, Cuenca said. And it doesn’t help that Biden was one of the authors of a 1994 law that is broadly credited as being one of the primary reasons for mass incarceration in the US, he added.

Still, a Democrat in the White House could help pass new social programs in a time of financial crisis that has impacted his own family, Cuenca pointed out.

Cuenca’s mother also says she is underwhelmed with her options for the November election.

Nohemi Cuenca is a Mexican American who leans left and isn’t impressed with any of the candidates in the race. For her, it’s almost an existential moment for democracy.

“We should have good quality candidates that you can say, ‘Wow, we can get behind that person.’ I don’t feel like that for any of them, to tell you the truth,” she said. “Bernie Sanders, yeah, I felt it 100% that he should have been the person.”

“I think it’s a really sad time for us in the United States when it comes to politics.”

“Why they picked Joe Biden?” she asked, rhetorically. “I don’t know. [He's so] out of touch. But so is Trump. So I think it’s a really sad time for us in the United States when it comes to politics.”

Nohemi Cuenca said she is “up in arms” about who to vote for, because “neither of them, I feel, is any good.”

The Cuenca household is politically mixed. Family discussions can get passionate from all sides. But Nohemi Cuenca said talking politics with her children’s father, a Republican and staunch Trump supporter, is always informative and respectful.

“He’ll disagree with me or I’ll disagree and we have our opinions and we talk. But I listen to what he has to say. He listens to me as well,” she said. “Same with the kids. When they inform me of something that maybe I was wrong with, didn't know correctly, they will correct me. So — ‘OK, let me do my research and look about it.’ So, we all take it in stride.”

Talking politics can feel like a welcome — if inescapable — distraction from the coronavirus itself.

Jacob Cuenca has rarely left home for the last several months, besides taking bike rides around the neighborhood. He spends his time inside playing video games and sleeping in. Originally, he hoped to get a summer job before going to school. But his prospects are tough with such a high unemployment rate, he said.

The situation makes his mother nervous about the world her son is entering as a college student, with high unemployment, social unrest and an ongoing public health crisis.

Their family can’t afford to pay the two weeks of mandatory off-campus quarantining Jacob Cuenca’s university would require because he’d arrive from a state with a high COVID-19 caseload. This factored into him delaying his start date to January.

Until then, Jacob Cuenca finds himself with a lot of time on his hands.

“I’ve been contemplating the world and what’s been going on right now,” he said.

He's been thinking about what he considers Trump's failures, as well as the lack of alternatives. A prime example, he said, is the US response to the protests that began after a police officer in Minneapolis killed George Floyd.

“Their response has been more to instigate it than try to quell the looters and the rioters,” he said of the Trump administration. “Both sides, too, because Democrats are just...holding hands and singing 'Kumbaya' and they think that’s gonna solve every problem."

But he sees himself aligning more and more with an idea that’s become popular on the left, one that emerged from the Black Lives Matter protests.

“I do think people can do better without the police and defunding them,” he said. “I think they should defund the police and put it all into education and make universities and stuff like that for free. I really do think that.”