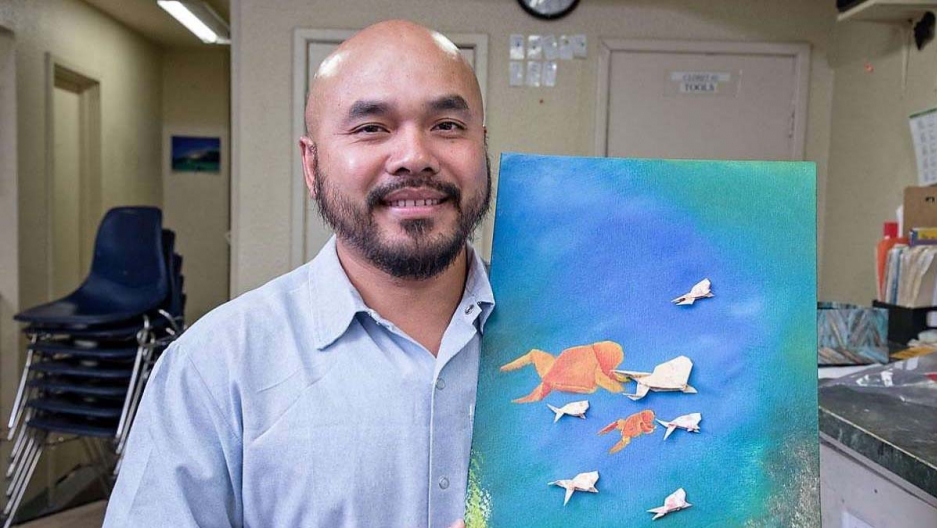 Chanthon Bun, who was incarcerated for 23 years, part of that time in San Quentin State Prison in California, shows artwork from an origami course offered in the prison.

After spending almost his entire adult life in a cell, Chanthon Bun was released from San Quentin State Prison in California earlier this month. Officials dropped him off at a bus stop three miles away.

Bun had not expected to go free — rather, he expected to leave prison and go straight into the custody of Immigration and Customs Enforcement, or ICE. Bun arrived in the United States as a child refugee in 1986 after his family fled the Khmer Rouge in Cambodia. He entered the prison system at 18 for the armed robbery of a computer store. Though Bun, now 41, has legal permanent residency in the US, his felony conviction made him a target for potential deportation once he had completed his prison sentence.

But ICE was not there to pick up Bun when he was released July 1, and that may be because of the coronavirus pandemic.

Prison-to-ICE transfers are routine in the US for some non-citizen immigrants who have charges or convictions. Every year, thousands of immigrants are released from prison and put into ICE detention, where they face deportation. Immigrant rights advocates have fought this policy for years. But it has come under renewed scrutiny with the pandemic as many detention centers throughout the country have experienced coronavirus outbreaks. As of July 10, 3,090 detainees have tested positive at detention centers nationwide, among a total detained population of about 22,600. Many advocates and detainees believe that total is an undercount because of a dearth in testing.

Bun was already feeling sick with symptoms of COVID-19 before his release from San Quentin. The prison is experiencing a severe outbreak of the virus, with more than one-third of the inmates and staff testing positive.

Bun’s condition made his lawyer nervous.

“We were deeply concerned, and I was getting letters from Bun as he was watching the outbreak spread around him,” said Anoop Prasad, a longtime immigration lawyer with Asian Americans Advancing Justice – Asian Law Caucus, a nonprofit based in San Francisco. “He was increasingly panicked and felt like a sitting duck sitting in a cell, and it was a matter of time before COVID came and got him.”

Prasad also worried that Bun’s transfer to an immigration detention center could be deadly and dangerous to others.

A growing number of groups that advocate for immigrants’ rights are also highlighting these risks.

"Folks should be released to their family members, where they can shelter in place. There is no social distancing in a crowded detention center,” said Luis Suarez, field advocacy director of Detention Watch Network, a coalition of immigrant rights organizations.

Weeks before Bun’s release, Prasad and others launched a public campaign, holding rallies and phone banks to stop the authorities from handing over Bun and other inmates to ICE. 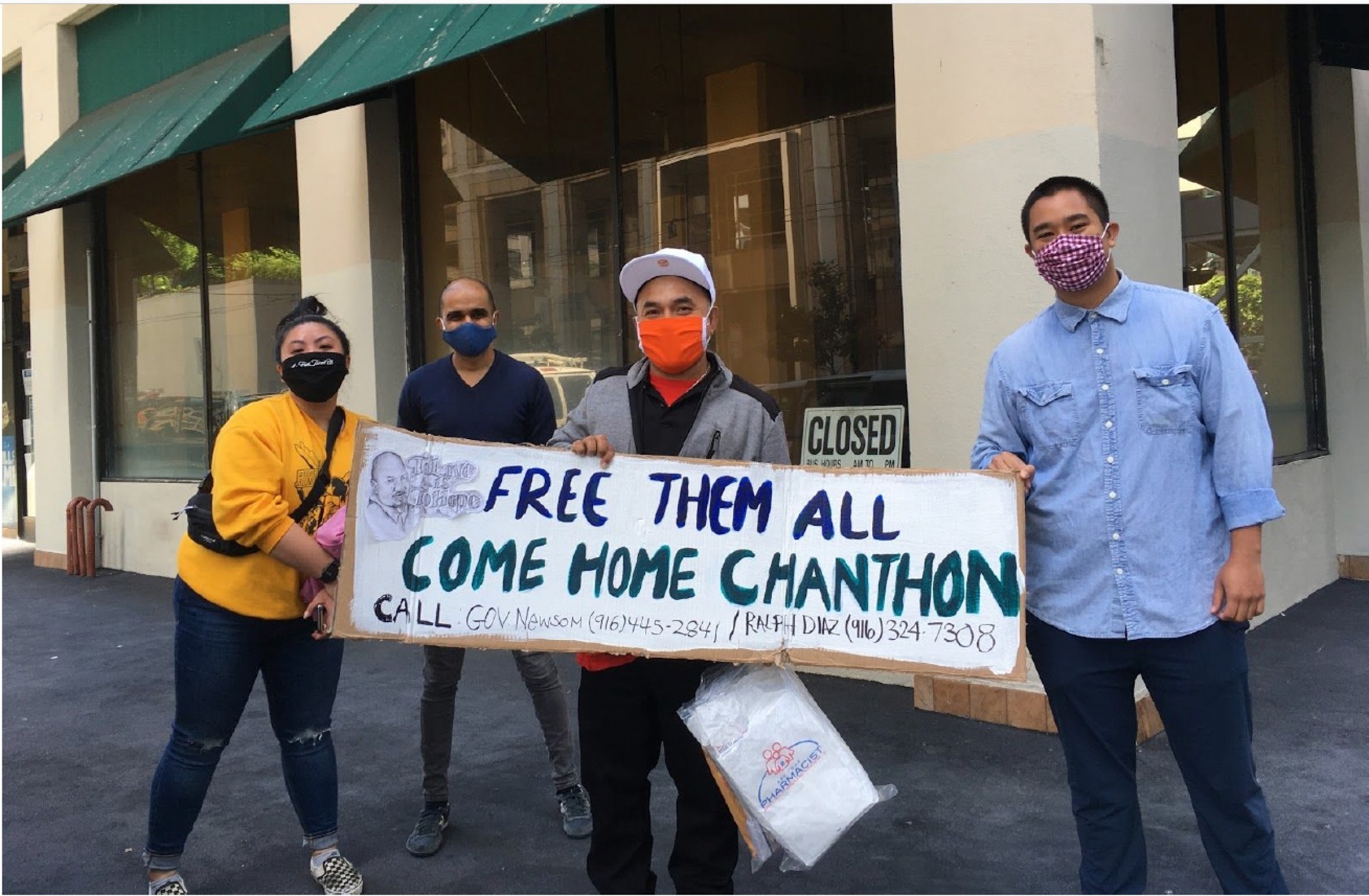 Immigrant rights advocates in San Francisco demanded the release of Chanthon Bun from San Quentin State Prison, along with other inmates showing symptoms of the coronavirus.

Meanwhile, an ICE agent informed Bun that he would be picked up from prison and taken into ICE custody.

“Inside, we all know about the ICE holds,” Bun said, referring to ICE’s requests to law enforcement officials to detain immigrants in jail or prison until they can be transferred to ICE’s custody.

The public pressure campaign seemed to work: ICE did not pick up Bun. He was so sure ICE agents would detain him that he hadn’t arranged for any friends or family to meet him at the bus stop, even after two decades in prison.

“I had my medication ready ... because I knew I was really sick. I was getting ready for myself, to protect myself when I got to ICE.”

“That was the biggest surprise ever,” Bun said. “I had put together a safety pack for myself to go to ICE. I had collected a little hand sanitizer. I had my medication ready ... because I knew I was really sick. I was getting ready for myself, to protect myself when I got to ICE.”

Some California lawmakers have also pressured local prison officials and California’s governor, Gavin Newsom, to stop the prison-to-ICE transfers because of the risks during a pandemic. San Quentin was largely virus-free until a larger transfer of inmates occurred in May from a prison with many positive cases in Chino, California. The number of people with the virus at San Quentin escalated rapidly after that transfer.

In an early July hearing before California’s senator, lawmakers grilled Ralph Diaz, who runs the state’s Department of Corrections and Rehabilitation, about the ICE transfers. Diaz said the current policy would not change.

“If an individual has served their term and their term is up and there is a hold or a warrant by ICE as a pickup, then they are picked up by ICE just like any law enforcement agency,” Diaz said.

ICE didn’t respond to interview requests about the transfers or Bun’s case and why the agency did not pick him up.

For the moment, Bun is happy to be out of prison, yet he still faces the threat of deportation. The day he was released, he headed straight to a church in San Francisco to protect himself from potential contact with ICE. The government agency’s policy includes churches on its list of hands-off “sensitive locations.” The name and location of the church are undisclosed.

Related: The sanctuary church movement is on the rise again in California

He is also recuperating from the virus, for which he tested positive after he was released. His spiking fever has eased.

Now, it’s “the cough and body pains,” Bun said. Volunteer nurses are monitoring his conditions as he self-quarantines in a living area connected to the church.

For Bun, it’s a surreal new chapter in his life. Before coming to the US, he and his family were resettled as refugees, after fleeing Cambodia and the Khmer Rouge’s genocide during the 1970s and spending time in exile in Thailand and the Phillippines. 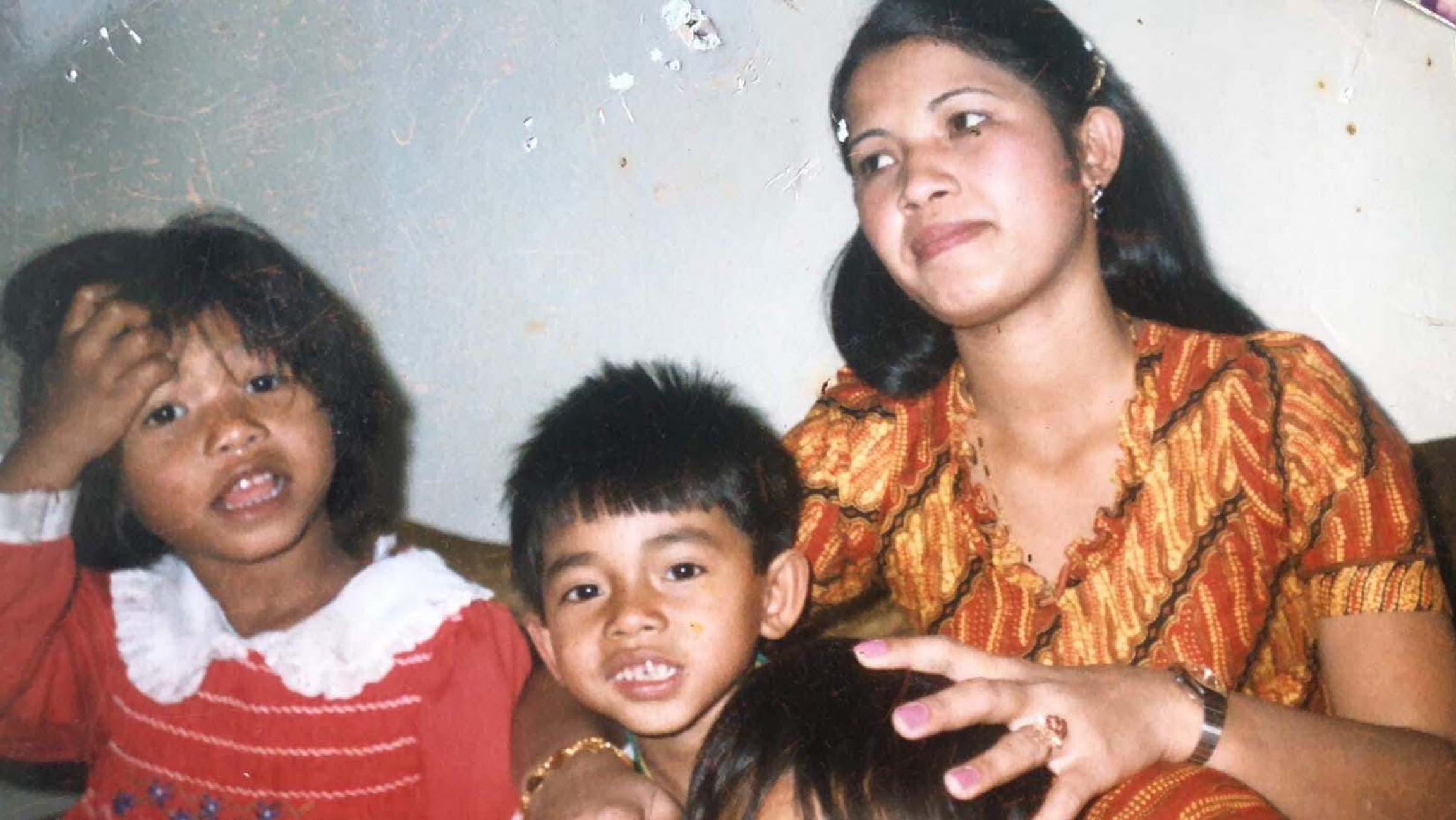 Chanthon Bun, middle, and his family shortly after arriving in the United States in the early 1980s after fleeing Cambodia and the genocide carried out by the Khmer Rouge.

During Cambodia’s brutal Khmer Rouge regime, Bun knew relatives who were murdered. He said he arrived to the US traumatized.

“I don’t think the United States was ready for kids like me. I got in trouble a lot, right? And people didn’t understand why. When I was scared, I fought. When I thought I could get away, I ran.”

“I don’t think the United States was ready for kids like me,” he said. “I got in trouble a lot, right? And people didn’t understand why. When I was scared, I fought. When I thought I could get away, I ran.”

Years passed, and Bun never applied to become a US citizen.

“I never thought about doing that,” he said.

Then, at 18, he entered prison, where he maintained his green card, or legal permanent residency. Yet, as a non-citizen, his conviction, for second-degree robbery, makes him a target for ICE.

Bun said it feels strange to seek shelter from ICE when he has spent almost all of his life in the US.

“This is my country now, too. I’ve been here since I was a kid," he said. "I know everything about this country. So, how am I different than you?”

In the meantime, Bun said that he is thinking of the community he built in San Quentin, including other immigrants like himself, who face twin threats: deportation and now COVID-19.

“There’s a lot of immunocompromised older gentlemen in those buildings so I’m praying that they survive this,” he said.