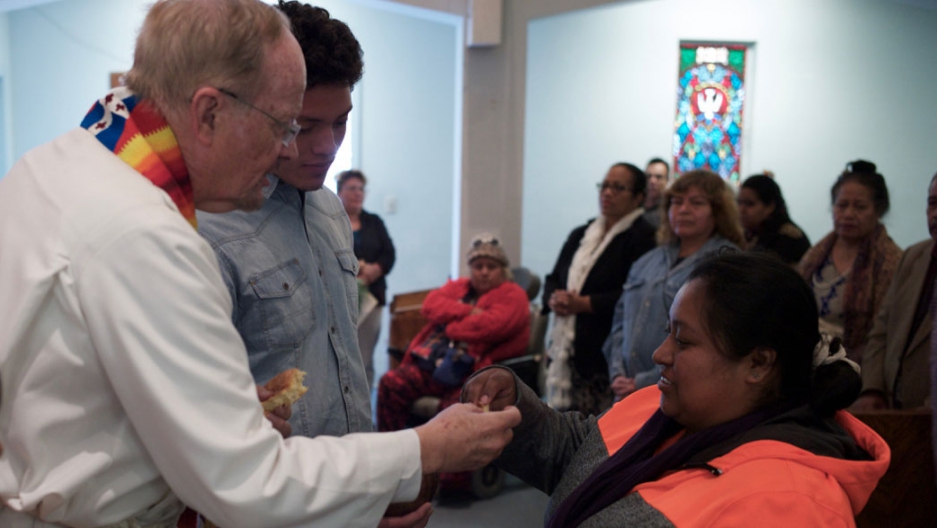 Beatriz Orduña Abarca at the United Methodist Church in North Hills in Los Angeles. Her husband was detained by US immigration officials last week. It is unknown whether he will be able to stay in the US or sent back to Mexico.

Cubans who have come to this country are treated in vastly different ways compared to many other Latino migrants. The biggest difference is because of the wet foot, dry foot policy which says Cuban immigrants caught at sea must go back to Cuba, but if they set foot in the US, they automatically get to stay here.

For many Latinos, that seems like an unfair privilege and it hurts even more knowing that deportation of immigrants is still at record highs — close to half a million people in 2015.

In the past, a portion of those deportations — in some years as much as half — were convicted criminals. But now the number of non-criminal deportations is growing and we’re seeing more moms and kids cross the border into the US.

That’s prompted a growth in the sanctuary church movement. Sanctuary churches are exactly that: Houses of worship where undocumented people can go who fear deportation.

I visited one of them, the United Methodist Church in North Hills, which is smack dab in the center of the San Fernando Valley in Los Angeles.

It was the Palm Sunday service that began around 6:30 a.m. with about 60 people in a procession around the church and into the street.

North Hills is a pretty tough part of Los Angeles. Gang violence — especially Latino gangs — was rampant through the 1990s. The LAPD managed to bring some of it under control but bad stuff still happens. A year ago, gang violence — most likely — led to a fatal shooting in the parking lot of the church itself.

On Palm Sunday though, the mood was light. There was a strong turnout of talented musicians, congregants waved their palm fronds and people seemed relaxed and happy, but Pastor Fred Morris began his sermon with an ominous note.

"No abra la puerta (don’t open the door)," he said several times, in Spanish and English. The largely Latino congregation knew exactly what he was talking about.

"If someone comes and pounds on your door at 6 in the morning saying it’s the police, you don’t have to open your door," Pastor Morris said during the service. "If they have a search warrant then ask them to pass it under the door, do not open the door. Read it. If you’re not mentioned pass it back."

Paster Morris has been at the United Methodist Church in North Hills for a year and a half. This church, the sanctuary, the community, all of this, is his mission. He came out of retirement for it, urged on by an old friend, a Latina bishop.

"I was living in a hammock in Nicaragua enjoying my retired status," he told me later. "She asked me and my wife to come here and start a new faith community in this place."

And in addition to preaching the gospel of Jesus, he’s been reminding his flock of their constitutional rights when agents from the Immigration and Customs Enforcement (ICE) might one day coming knocking on their door.

Pastor Morris’ advice has been useful to many in his congregation — including one family from Mexico who last Wednesday did not open their door when ICE agents paid a visit.

But moments after ICE departed, the father had to leave the house and the authorites pulled him over while he took his daughter to school. Pastor Morris told the congregation about it during his sermon.

"Immigration Customs Enforcement agency, which is the largest police force in the United States, arrested one of our neighbors across the street over here leaving his wife and two children. He is in a detention center in Victorville and is going to have to be dealing with deportation order," he said.

That man, David González, was detained.

I met his wife, Beatriz Orduña Abarca. We spoke about her husband’s situation. 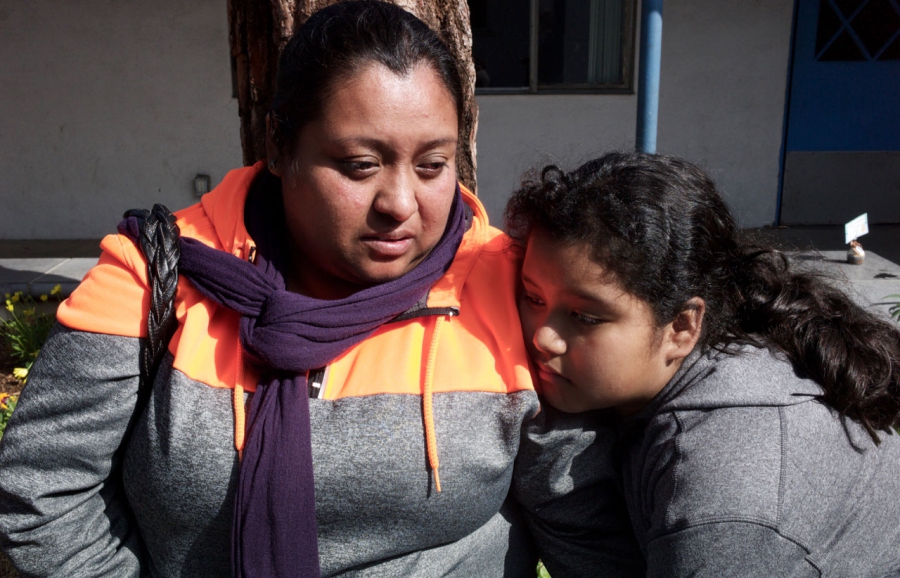 Beatriz Orduña Abarca with her 9-year-old daughter, Lindsay González, a US citizen. Abarca's husband was detained by US immigration officials last week. Now, Abarca and her daughter are unsure how they will get by without him, and whether they should seek sanctuary at the church, which is offering lodging for immigrant families in situations like theirs.

Abarca said he was taken in because he was using a fake driver’s license. But she hasn’t heard much else and she’s afraid to go to the detention center herself because she’s also undocumented. She doesn’t know whether he’ll be allowed to stay here or deported back to Mexico — after living in the United States 16 years.

One detail she’s confused by is whether her husband is also being held on a years-old domestic abuse charge that she says had been cleared up.

Pastor Morris has been trying to get them a lawyer. But as Morris told me, pro-bono immigration lawyers are maxed-out with cases, so that’s hard.

As I spoke about all this with Abarca, her 9-year-old daughter Lindsay sat close to her — she was in her dad’s car when ICE arrested him last week.

I asked Abarca about what’s been hardest without her husband not around. "Everything, she said. "Everything."

Rent, bills and food were all more challenging to manage without her husband she said.

It was then, she got to a point where it was just too much to talk about anymore.

There’s been a history in California of churches offering sanctuary to undocumented immigrants. Back in the 1980s, several hundred churches became sanctuary churches, primarily for Salvadorean refugees.

"(The churches) saved the lives of a lot of these people and then after that war was declared over and people stopped coming in large number the sanctuary movement sort of unwound," Pastor Morris said.

But now it’s winding up again.

Many Mexicans come to the US from rural places where there are no jobs to go back to if they’re deported. So they’re desperate to stay.

And Central Americans even more so. Gangs — especially in El Salvador — are ravaging their towns. Gangs that, as Pastor Morris pointed out, ironically got their start in Los Angeles and then exported their brutality back to Central America when the LAPD began getting them deported them in the 1990s.

"And so they deported hundreds if not thousands of Salvadorans, Hondurans and Guatemalans gang members back to their country," Pastor Moris said. "Well these kids got off the airplane, they had no skills, they hadn’t finished school, the only thing they knew how to do was to run a gang, and they were very good at that. So they got guns and they began a protection racket. Most people in El Salvador now even the lady on the corner selling bananas off of a cart has to pay a gang $20 a week to keep her store going."

That’s why so many unaccompanied minors have been fleeing Central America and making their way to the US.

ICE has targeted a lot of them since the beginning of this year. The organization has said it wants to send a message that they cannot come here — and just stay.

But for a lot of Central America, going back is an option that’s too dangerous. It’s also why Pastor Morris gave his church in North Hills sanctuary status.

"I don’t feel we’re at risk here at all because I don’t think ICE is going to want to break down the doors of the church on camera for Telemundo and Univision," he said. "I think that’s too heavy for them.  They’re not going to do it. They didn’t do it in the 80s to any of these churches that were holding people, I don’t think ... so I’m not losing any sleep over that possibility, but … we are waiting now.”

Pastor Morris and his congregation declared their church to be a sanctuary church in January.

That’s how worried members of his congregation are about deportation — even going to the protection of a sanctuary church feels perilous since it means openly declaring your undocumented status. Many are just not going to do that.

No one has asked for sanctuary yet — including Abarca and her kids from Mexico who are now without a dad and husband. But Pastor Morris is keeping busy all the same, finding lawyers for this community in dire straits, raising money to help families left behind when there is a detention or deportation and keeping on message about knowing your constitutional rights.

And somehow, they have managed to keep another thing: a sense of humor.