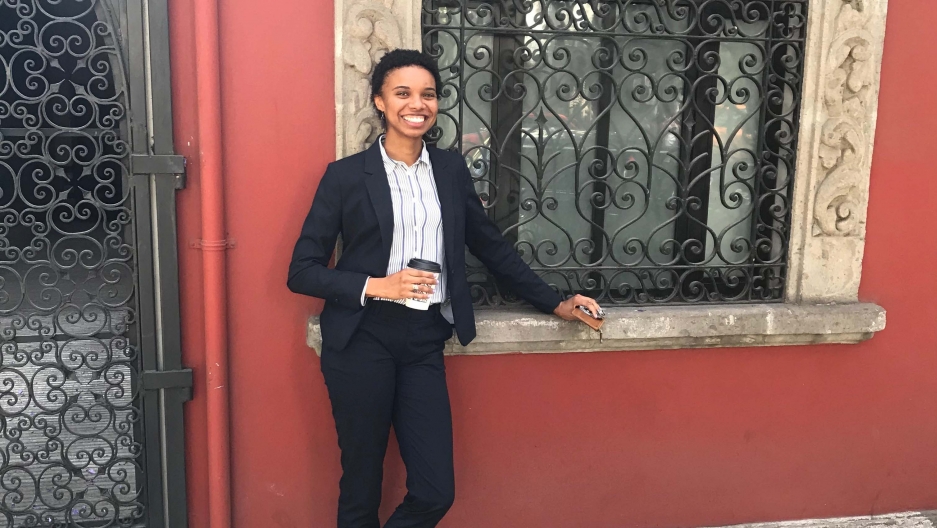 Tianna Spears says she faced racial discrimination by US border officials while working as a US diplomat posted in Ciudad Juárez, Mexico.

People of color have been fighting to diversify the United States' diplomatic ranks for decades.

Tianna Spears is a former American diplomat who worked at the US consulate in Ciudad Juárez, Mexico, just across the border from El Paso, Texas. Spears, who is Black, says she was racially profiled by US border officials, who pulled her over at least 25 times for extensive questioning and car inspections over a six-month period last year. She also says her supervisors at the consulate did nothing to help after she reported the incidents.

Spears resigned from her State Department job. A blog post she wrote in the wake of George Floyd's killing sparked debate within the US diplomatic corps on the experiences of people of color who represent the US abroad.

A Customs and Border Protection spokesperson told The World that the agency conducted an internal investigation last year and found no evidence to substantiate Spears' allegations of racial discrimination, harassment or unfair detainment at the US port of entry — and that its agents acted appropriately.

In a separate statement, State Department officials told The World that they take Spears' allegations "very seriously" and that the agency is working with CBP to "improve the experience of our personnel at the border and cooperation between the officers of the two agencies."

The World's host Carol Hills spoke to Spears about what she experienced as a US consular officer.

Related: What South Africa can teach the US about racial justice and reconciliation

Carol Hills: Tell us how race played a role in your first foreign posting.

Tianna Spears: As soon as I started crossing the border regularly, I experienced this harassment. I was threatened. I was constantly asked if I was really a US citizen. They questioned if I stole my car, if my car was a rental. They accused me of being a liar, a drug dealer. Every time I told them I worked as a US diplomat, they laughed at me. They told me they didn't believe me. It was just harassment and bullying on a racial level.

And were you often crossing over the US border and encountering the same officials over and over?

Yes, it was the same officials. I began to realize that they recognized my car and they also recognized me.

And how did you respond? Did you call them on their behavior?

At first, I went along with it because, mind you, at this time, I was 26 years old. This was my first job. I was making my family, my community proud. So I just went along with it. It took me a while to really sit down and come to terms with what was happening.

And did you talk about what was happening to you with people at the State Department?

I had a few [white colleagues] that had lived for two, three years in Juárez, and had never been pulled [into secondary inspection]. And they crossed just as much as I did.

Tell me what happens at secondary?

In Juárez, at the border crossing I was crossing over, they pull you over to the left side and you have to turn your car off. In my case, they would always place my car keys, passports and my ID on top of the windshield and I would have to sit on a metal bench while they searched my car. I know that [US Customs and Border Protection] has every right to inspect officers. But I was harassed. It was to the point where any time I would cross the border, my hands would shake and I had to actually talk myself into getting into my car.

When you complained to the State Department about what was going on, what was their response?

I spoke to two white, regional and assistant security officers that are in charge of protecting us at posts and at the consulate in Juárez. And I explained my case. I explained how I was harassed. And I was met with gaslighting and denial. And in my case, essentially, the response was, "It's not race discrimination."

So were any actions taken by the State Department that you know of?

I met with the head of upper management to explain my case. But to this day, I have never heard anything about a conclusion or if the officers involved were disciplined. I've never heard back from the State Department or CBP.

And what kind of feedback did you get when you would speak to other colleagues of color about their own experiences?

Other colleagues of color told me that this had happened before. And, you know, you either have a choice — it seems like — within the State Department's hostile and racist environment: Either you just go along with the plan, you can keep your job and your financial security and your career trajectory, or you can speak out.

What made you finally decide to resign?

First of all, I would not say that I resigned from the job. I strongly believed that I was forced out. Nothing was done in my case. The Juárez management decided to transfer me to Mexico City, which is far, far from the US border. But at that point, the damage had been done and it became clear to the point where I just had to choose my own peace of mind, and that the State Department wasn't going to protect me or any other person of color. And since coming forward, I've learned that these are not isolated incidences. The State Department knows about this harassment and has known for years and has decided not to do anything about it. They hoped that we were silent and we don't say anything or come forward. But I just really, truly believe enough is enough. Something has to be done.

It's a hostile, racist environment.

How does that express itself?

You look around and you don't see anyone who comes in the door that is a person of color, that are, you know, that are being hired. You don't see people of color that are promoted. And they were definitely not retained. It's just this environment where the State Department caters to that phrase "pale, male and Yale." That's the foundation that it's been built on.

What do you think it would mean to US diplomatic efforts if the diplomatic corps looked more like America looks?

America loses, first of all, when we're not an inclusive society and when we're not welcoming to others. But secondly, when we're overseas at our embassies and consulates abroad, we have a great opportunity to advance diplomacy and show what America truly represents.

How could the State Department reimagine recruitment and bolster retention of diverse staff and diplomats?

Right now, there are two fellowship programs that hire people of color and give them positions within the foreign service. I'd say that the State Department needs to increase fellowship programs like this. They need to increase hiring of people of color, promoting entry-level officers and mid-level officers so that they actually have the opportunity, sit at the table and make decisions within these rooms and within the embassies and consulates. So the entire State Department has to look within and see what they can do to make the culture safer, healthier for people of color that come in and give their lives and their careers and their families to its mission. But also, just overall, speaking to my own personal experience, I would still be a foreign service officer if I felt that they cared about me and they protected me.