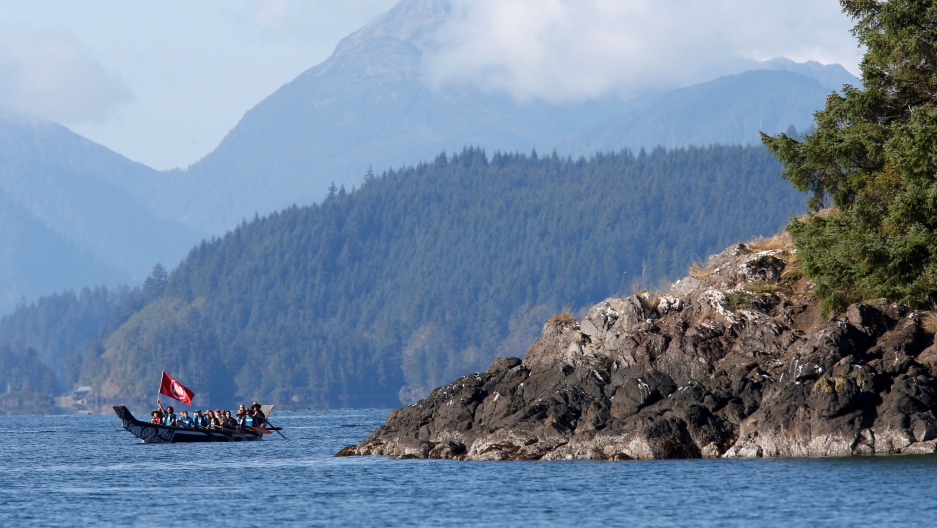 Britain's Prince William and Catherine, duchess of Cambridge, tour in a canoe during a visit to Haida Gwaii in Skidegate, British Columbia, Canada, Sept. 30, 2016.

Off the coast of British Colombia, north of Vancouver, there’s a collection of rocky islands covered with mossy rainforest. It’s called Haida Gwaii, for the people who live there — the Haida Nation.

Their economy relies on tourism, and they usually welcome thousands of visitors drawn to world-class fishing and hunting. But this year is different: People on Haida Gwaii are making news for their efforts to keep people out, by meeting incoming ferries with “unwelcome parties” of hundreds.

“People are just tired of people just showing up here, coming and going at will.”

“People are just tired of people just showing up here, coming and going at will,” said Billy Yovanovich, chief councilor of the Skidegate Band — one of the two bands that make up the Haida Nation.

The Haida are one of many Indigenous groups across the world trying to stay closed as surrounding areas reopen following restrictions to contain the spread of the coronavirus.

For the Haida, their caution is dictated in part by history: The Haida people once numbered in the tens of thousands, but in the early 1900s, they lost 90% of their population to smallpox and other diseases brought by Europeans. Now, they number about 500.

“So, we can’t afford to lose anybody,” Yovanovich said. “Our only defense on the island here is just to not get this on the island.”

That became clear to him in April, when a ferry worker staying on one of the islands disclosed he had a roommate on the mainland who had tested positive for COVID-19.

“All the communities were upset with this guy,” Yovanovich said. “He was telling health officials he was self-isolating, but other people in the communities had seen him doing things he shouldn’t be doing.”

The man agreed to leave. No one got sick. But that incident made people on Haida Gwaii realize that if there were an outbreak, their small hospital would be quickly overwhelmed, and older people would be most at risk  — including the last people fluent in their language.

“It’s of utmost importance to protect our knowledge keepers. Because who knows how long we’ll have all of them.”

“It’s of utmost importance to protect our knowledge keepers,” Yovanovich said. “Because who knows how long we’ll have all of them.”

Now, older people have been confined to their homes. People are bringing them food. The small airlines that service the islands have agreed to cut back flights, and regular big Haida community gatherings have been canceled. Anyone coming in from the mainland has to quarantine for two weeks.

“It turned us 180 degrees,” Yovanovich said. “We’re welcoming people. Tourism is our economy. And to have to say ‘no’ to visitors is hard.”

The situation got more difficult in late April when British Columbia officials declared hunting and fishing essential services, paving the way for sportsmen to travel. The president of the Haida Nation said that the province could be doing more to help restrain tourists.

“Seeing people who want to come to our territories and move freely is disrespectful and disappointing,” Haida Nation President Jason Alsop told webcast viewers in early May.

Provincial officials say the Haida have the right to keep people out, but the ferry companies who service the islands say they can’t stop people from traveling there. They can only point ferry riders to the posted signs that tell people not to come. To actually stop the flow of travelers coming in, the Haida have turned to the nearby Coastal First Nations to coordinate strategies and present a unified voice.

“It’s really brought together the rural communities in a way we haven’t seen before.”

“It’s really brought together the rural communities in a way we haven’t seen before,” said Marilyn Slett, chief councilor of the Heiltsuk Nation.

They’ve set up checkpoints at all the entrances to their reserves, she said. Community patrols monitor the marinas. Watchmen patrol the borders. And Slett said they do have to turn some people back.

“Most of them are respectful. Some not so much,” she said. “We know that people are trying to get away from the large centers, to have access to their pleasure boats, their yachts, but for the most part, they do understand.”

Meanwhile, Slett said they’ve built a surge center in a community gym to supplement their small hospital, and hired a contact tracer. Still, they need services like rapid testing before they can even have a conversation about reopening. For her, and for Yovanovich, the lives who might be lost to the coronavirus are far more important than the potential damage to their economy by staying closed.

“The risk of it hitting here and having such a negative impact on our islands is not worth any dollars we’d make by opening up too soon,” Yovanovich said. “We’ll open up when we’re ready.”

When there are no new cases or a vaccine comes out, he said, they’ll be glad to welcome people back.