On a normal day in late May, the Oakes Hotel in Niagara Falls, Ontario, would be crawling with tourists, many of them Americans. It’s the start of the summer season and tens of thousands of Americans take advantage of the fact that Canada is an easy border crossing away. But things are not normal this year.

The border between Canada and the US remains closed to all but essential travel — and the city is deserted.

At the Oakes, owner Vince Kerrio and a receptionist are the only other people in the lobby. Kerrio says just 12 of the hotel’s 300 rooms are occupied.

“So you know, you got your whole floor to yourself,” he said.

After two months of lockdown, businesses in Ontario are slowly starting to reopen. But last week, Prime Minister Justin Trudeau announced that Canada and the US had agreed to extend the border closure until at least June 21.

Kerrio has spent a lot of time implementing safety measures to protect his staff and guests against coronavirus. He says there’s hand sanitizer everywhere. Cleaners wipe down surfaces in common areas on the hour and the hospitality staff has been trained to keep their distance and refrain from handshakes.

But so far, customers have not returned. Kerrio predicts it will be a “dismal” summer.

“Maybe we’ll do 50% of the people we did last year. Maybe,” he says. “This is not a year where we’re going to make any money. If we pay our bills we’ll be happy, but, I mean, that’s even a stretch.”

About a quarter of Kerrio’s customers come from the US. He says having them return could make the difference between whether he can pay the bills or has to default.

But Kerrio, who also serves as a city councilor, supported a resolution asking the Canadian government to keep the border closed to all but essential travel until the US flattens the curve — at least for now. New York State has had one of the biggest coronavirus outbreaks in the US.

Directly across the border, in Erie County, New York, about seven times as many people have died of COVID-19 as in the Niagara region and eight times as many have contracted coronavirus.

Kerrio says he’s counting on Canadian visitors to keep his business afloat this year. He’s worried that if the border opens too soon, they’ll be afraid to come to Niagara, and he’ll lose them, too.

“Why would we take that risk? You know, for economics? I think we want to make sure that this doesn’t come back.”

“Why would we take that risk? You know, for economics? I think we want to make sure that this doesn’t come back,” he said. “You open the border prematurely and we get a second or third wave of this, no one’s going to want to come here. Maybe for five years.”

Trudeau said the Canadian government is looking at how it could improve screening at the border to prevent people with the coronavirus from crossing. But a recent poll found that half of Canadians want the border to stay closed until the end of the year.

Beth Jackson, who lives in Crystal Beach, a tourist town on the north shore of Lake Erie that caters to Americans, doesn’t go that far. But she says she’s happy the border is closed for now.

“It’s never been closed that I’m aware of, so for it to be closed, it’s got to be serious. Everybody has to chill out,” she said.

Rules on social distancing are still in place in Crystal Beach. Dine-in service at cafés and restaurants is banned for now. Jackson takes her coffee across the street from the local Tim Horton’s coffee shop, seated on a lawn chair six feet away from her friend.

Jackson says she’s faced “incredible” anxiety since the pandemic started. Her mother lives in Amherst, New York, a 45-minute drive away. Her brother is in Williamsville, New York. Until the border closed, she and her mom saw each other at least once a week. Now they either talk on the phone or use FaceTime.

“You don’t like being kept from your parents. I mean, my mom and I have a friendship, a very close relationship. So it’s really hard,” she said. 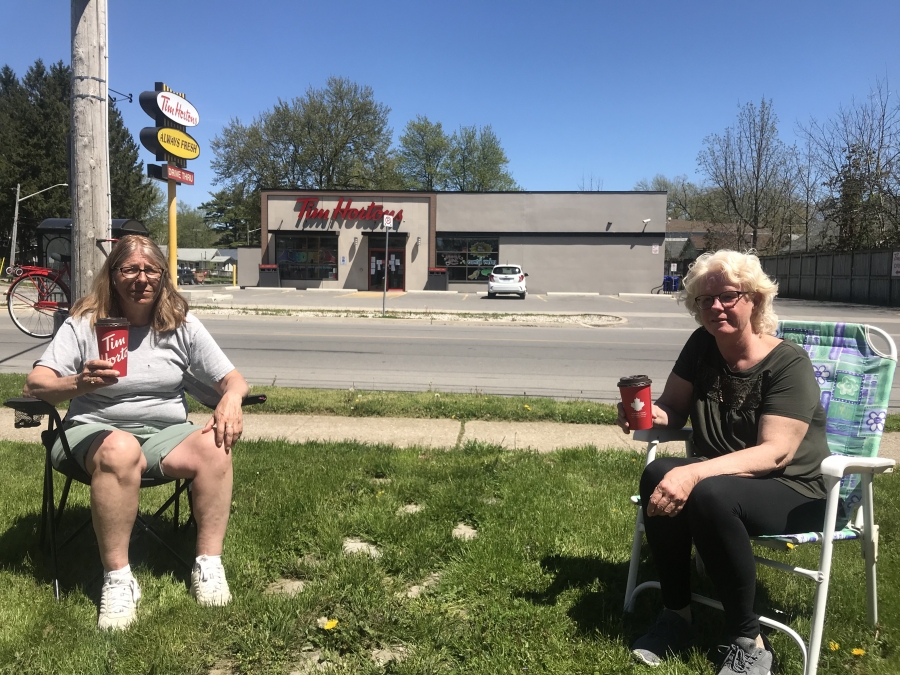 Jackson says she’s worried that people south of the border are not taking the pandemic seriously. Her mom tells her most people there are not wearing masks when they go out, and they don’t respect social distancing guidelines.

She added that she’s been strict about following social distancing guidelines, and hasn’t hugged any friends or family members since the pandemic started.

Her friend, Lorrie Chute, said she also wants to see the border stay closed. She says the protests south of the border in the US demanding the economy to open more quickly scare her.

“It’s the attitude I don’t want here. ... When you see people in Detroit outside the legislature with guns because they don’t believe in this, they want the economy to come back — you don’t want those people coming here.”

“It’s the attitude I don’t want here,” she said. “When you see people in Detroit outside the legislature with guns because they don’t believe in this, they want the economy to come back — you don’t want those people coming here.”