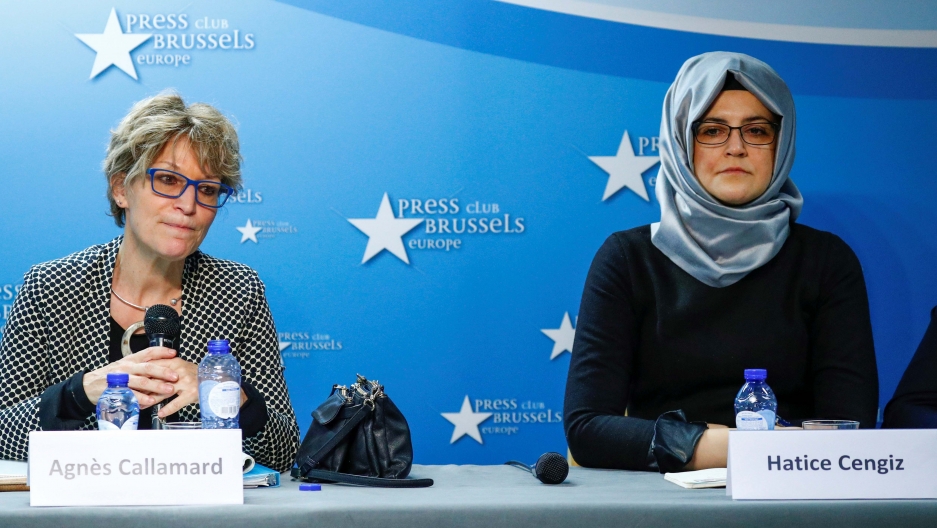 The Saudi royal family probably feels it can now move on from the murder of journalist Jamal Khashoggi now that his sons released a statement Friday saying they forgive their father’s killers. Khashoggi, who was a critic of the Saudi government, was killed and believed to have been dismembered inside the Saudi consulate in Istanbul in October 2018.

In Saudi Arabia, which lacks a codified legal system and follows Islamic law, forgiveness from a victim’s family in such cases can allow for a formal pardon and a stay of execution. Khashoggi's fiancee, Hatice Cengiz, said no one could pardon his killers.

Agnès Callamard is the United Nations special rapporteur on extrajudicial, summary or arbitrary executions and led an investigation last fall into his murder. She joined The World's host Marco Werman from Paris.

This is a stunning statement from Khashoggi's sons — that they forgive the killers of their father. What are his sons saying in this document they put out on Twitter today?

Well, what they are saying is that in this period of Ramadan, they wish to forgive the killers of their father whom they describe as a martyr. My main feeling really is compassion for the family and the son in particular, who must have been put under tremendous pressure to put out such a statement. And we need to remember that the Saudi state will stop at nothing to have its way.

Well, Ms. Callamard, you're starting to lean into it. In your statement that you put out today, you call this pardoning a parody of justice. Explain what you mean.

Well, I describe it actually as a final act of the parody of justice, because the parody of justice started almost a few days after the killing of Jamal Khashoggi when a team of 17 or 18 individuals were sent off to Turkey for the purpose of investigating the killing. And in fact, what we know now is that their main objective was to clean up the crime scene. The second act was the trial, which I have described as well as a travesty of justice. It was held secretly. It did not include those who ordered or incited the crime. The third one was the delivery of the verdict in December last year, where those that ordered the crime and were in the trial, were let free. And the only ones that were condemned were basically the little people, the hit men. And the last and final act was when the son announced that he was pardoning the killer. But everything has been a travesty of justice.

So, what are the next steps here? You’ve done an extensive investigation. You’ve published your findings. Where can this case go from here?

They is a role for courts, just not courts in Saudi Arabia. So, for instance, the Turkish prosecutor has announced that he was charging 17 individuals. So, I'm hoping that Turkish judges will move on with a trial in absentia. Under universal jurisdiction, there is much that European courts could do and the US as some form of jurisdiction over the killing because Jamal Khashoggi was an American resident.

How optimistic are you, though, that this administration, given its coziness with the Saudi monarchy, will pursue justice from this end?

I don't think the administration will do so.

Unfortunately, no. I think individuals in the US can activate the judicial process. The problem at the moment is with the US administration. The White House has imposed a veto on all Congress-driven resolutions related to Saudi Arabia for the last 12 months. The White House at the moment is definitely not working for the purpose of delivering justice, but really for the purpose of impunity and silencing the voices of those who want justice.