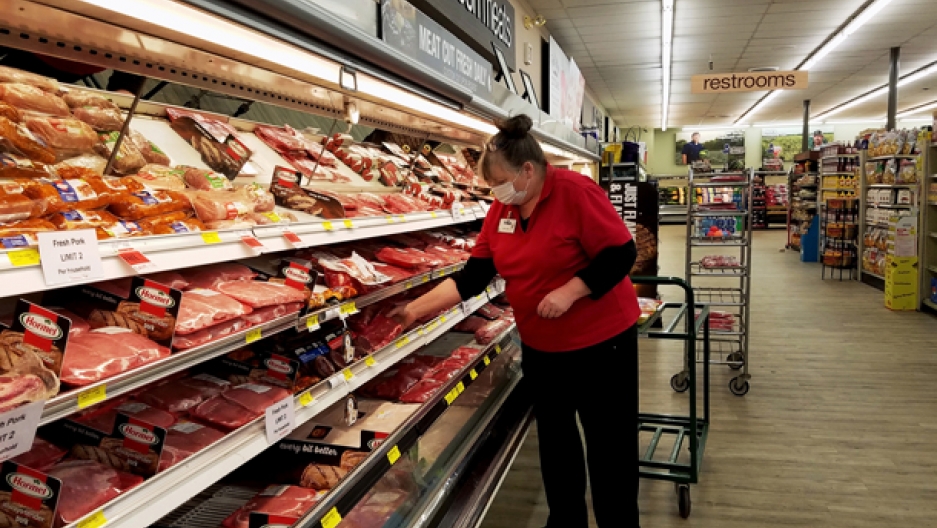 The coronavirus pandemic has forced some meatpacking plants to close and hundreds of workers have fallen ill, leading to meat shortages in part of the country. Pictured, a grocery employee restocking, wearing a mandatory mask.

The coronavirus pandemic has affected nearly every aspect of the US economy, including the food supply.

Dairy farmers are dumping millions of gallons of milk, contract growers are plowing under perfectly good vegetables, and industrial livestock farmers are euthanizing animals in the face of coronavirus outbreaks at meatpacking plants. At the same time, grocery stores are running short of some supplies, including meat.

Michael Pollan, author of "The Omnivore’s Dilemma" and other books, says the COVID-19 pandemic has exposed major vulnerabilities in the American food supply chain and presents a strong case for deindustrializing the nation’s food system.

“We have a system of incredible efficiency, [but now] the legendary bounty of the American supermarket is being challenged by two things,” Pollan says. “Initially, it was challenged by a demand crisis. At the beginning of the pandemic, we had people hoarding, as they do before a hurricane or a blizzard, and this was emptying supermarket shelves, which is a phenomenon that feeds on itself. But then we moved into a second stage — and that's where I think we are now and increasingly are going to be — which is a supply problem.”

The US actually has two food systems, and it’s the second, less understood one that is really struggling.

The US actually has two food systems, Pollan points out, and it’s the second, less understood one that is really struggling.

This food chain has basically collapsed because people are staying home. “They’re not going to work and they’re not going to restaurants and it is proving very difficult to reroute all that food to the grocery outlet,” Pollan says.

In this food chain, milk, for example, is not sold in quarts or half gallons. It's sold in giant containers intended for institutions, and now that milk no longer has a market.

“Those farmers and their distributors don't have an easy way to move it to the supermarket chain,” Pollan says. “It would involve new packaging [and] whole new production lines. So they're dumping it, because obviously you can't store milk very long, and they're plowing produce into the ground.”

A colossal amount of food is going to waste while food banks in some areas of the country are seeing hours-long lines filled with people who really need food.

That's why a colossal amount of food is going to waste while food banks in some areas of the country are seeing hours-long lines filled with people who really need food. “And that's just one of the indicators that a system that's really efficient sacrifices resiliency — and now it is resiliency that we need,” Pollan says.

Related: These organizers are on another front line of coronavirus: Hunger

When a food system achieves a high level of efficiency, it does so in part by reducing redundancy, Pollan explains. When the country moved from a system with hundreds of regional slaughterhouses and tens of thousands of small farmers, “if there was a problem at any one of those places, it would barely make a ripple in the food system” because the system had so much redundancy.

But over the years, "due to lack of antitrust enforcement and the celebration of efficiency,” the meat industry has consolidated to a remarkable extent, Pollan says. Today, four companies slaughter 80 to 85% of the nation’s beef, and about 50 plants process some 98% of all the meat in the country.

This consolidation made meat cheaper, and it's a more efficient system, Pollan says, but it leads to a situation in which farmers raising meat for, say, a Smithfield plant in Sioux Falls, Iowa — where they are contracted to take their pigs when they reach slaughter weight — suddenly have nowhere to go because the pandemic has forced that plant to close.

“You can't simply feed your pigs longer; they get too big to go into the system,” Pollan explains, “and you've got baby pigs coming along very, very quickly. That's why we see the destruction of all these food animals. Millions of food animals are being euthanized right now, because there's no slaughter plant to take them to.”

There's a high cost to cheap food. ... You don't get cheap food without sacrificing other values.

Pollan has been warning for years that “there's a high cost to cheap food. ... You don't get cheap food without sacrificing other values,” he maintains. “We have put price at the center: ‘Pile it high and sell it cheap’ is the motto of the American food system. We’ve gotten really good at that. But in the process, we had to make certain sacrifices.”

One such sacrifice is raising animals in brutal conditions and shooting them full of antibiotics and hormones so they'll grow more quickly and be able to withstand their living conditions, Pollan notes. Another, he says, is moving the slaughter plants to the Plains states — by and large in order to escape union workers and replace them with undocumented workers who receive low wages.

They also made working in a slaughterhouse “the most dangerous job in America,” Pollan says, “because the line speeds are so fast.” Now, a dangerous workplace has become even more so because workers are getting infected with the coronavirus.

“A slaughterhouse has thousands of workers, working shoulder-to-shoulder on production lines,” Pollan explains. “The meat, or the carcasses, are coming so fast, they say they can't even pause to cover a cough without the carcasses flying by them. They can't get permission to go to the bathroom without whispering directly into the ear of a supervisor. So, it's a very intimate place.”

“Add to that the fact that a very high percentage of these workers are undocumented immigrants who have no health care, who have no sick pay, and, indeed, are being forced to work even when they're sick,” Pollan says.

Pollan worries the country will “try to get back to what we call normal” after the pandemic and "not make the kind of changes we need to make.”

On the other hand, he can imagine a leader or a party “building a new politics around the common theme of addressing the problems that the pandemic exposed.”

One of these is the so-called essential worker, a term we never used to hear before, he notes.

There is this paradox that we've learned: That these essential workers are the most mistreated and lowest paid — and there's something very wrong with this picture.

“There is this paradox that we've learned: That these essential workers are the most mistreated and lowest paid — and there's something very wrong with this picture,” Pollan says. “One thing that should come out of this, and I hope will, is addressing these inequities.”

“In food, it would mean, I think, decentralizing [and] deindustrializing the food system to the extent that we can,” he continues. “We tolerated the concentration of the meat industry and other parts of the food industry because it promised lower prices to consumers — and it did deliver that. But if you think about the cost now, in terms of the fragility, the brittleness of the food system, it was too high a price to pay.”