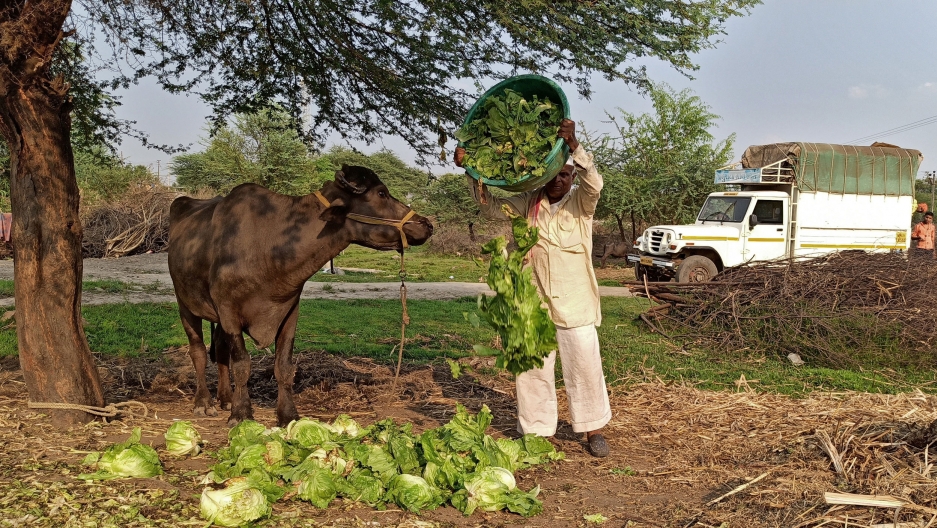 A farmer feeds iceberg lettuce to his buffalo during a 21-day nationwide lockdown to slow the spread of coronavirus disease (COVID-19), at Bhuinj village in Satara district in the western state of Maharashtra, India, April 1, 2020.

In the fertile Satara district in western India, farmers are putting their cattle on an unorthodox diet: Some feed iceberg lettuce to buffalo. Others feed strawberries to cows.

It's not a treat. The farmers can either feed their crops to animals or let them spoil. And other farmers are doing just that — dumping truckloads of fresh grapes to rot on compost heaps.

The farmers cannot get their produce to consumers because of lockdowns that aim to stop the spread of coronavirus. In India, as in many parts of the world, restrictions on population movement are wreaking havoc on farming and food supply chains and raising concern of more widespread shortages and price spikes to come.

Related: How people around the world are filling their pantries

Across the globe, millions of laborers cannot get to the fields for harvesting and planting. There are too few truckers to keep goods moving. Airfreight capacity for fresh produce has plummeted as planes are grounded. And there is a shortage of food containers for shipping because of a drop in voyages from China.

In Florida, a lack of migrant laborers, who typically come from Mexico each year, means watermelon and blueberry growers face the prospect of rotting crops. Similar shortages of workers in Europe mean vegetable farms are missing the window to plant.

Such sprawling food production and distribution shocks illustrate the pandemic's seemingly boundless capacity to suffocate economies worldwide and upend even the most essential business and consumer markets. There has been limited disruption so far to supplies of staple grains such as rice and wheat, although problems with planting and logistics are mounting.

Maximo Torero is chief economist for the United Nations Food and Agriculture Organization in Rome, Italy. He told The World's Marco Werman that while there is not currently a food shortage, the pandemic requires rethinking logistics to maintain access to the global food supply.

Marco Werman: Maximo, how stable is the global food supply chain right now? How big is your concern?

Maximo Torero: So the food supply chain can be split into groups. What we call the staples — so cereals, wheat, maize, corn, rice — and high-value commodities — like fresh fruits and vegetables and meat and fish. In the case of the staple commodities, we have enough stocks — significantly higher than we had in 2007 and 2008, in the food crisis. And we also have a very good harvest this year. So the supply side is really good.

The only problem, there is a logistical problem — so, how much that commodity can be moved out into the different markets and to the ports to be able to distribute it to different countries. In the case of the high-value commodities, the discussion's a little bit more difficult. Why? Because they are labor-intensive. That means that they need labor and they could be affected by locals and they could be affected by health issues of the labor force. And also the logistical part is more sensitive because this is perishable food.

Related: Coronavirus has changed how we transport goods and ourselves. But will it last?

It sounds like you're not losing sleep over this, but you've got some concerns. We've seen disruptions in global food markets before, as recently as 2010 to 2012. What do you think is different this time around?

So the big difference in the food price crisis, the problem was that there was a scarcity of food. So we had very low stocks at that point in time. We had droughts, which affect the production of staple commodities. That is not the case today.

I was reading about food stocks in India. With people obliged to stay inside by law, the retail market where most people get their food has pretty much collapsed. I mean, some estimates suggest as much as 80% of the food stocks that are sold in markets are just rotting and going to waste. What does that mean for the near-term? How and what will people in India actually eat?

Yeah, that's a big problem. The high-value commodities that you cannot store — it will create a problem of waste, which is the last thing we want right now. And that's why we are saying, in India and in other countries where the lockdowns are being implemented, the governments need to put the emphasis on protecting the value chain. That means creating the conditions, and the health conditions, necessary for that value chain to keep operating.

One solution that we have been looking at different experiences, is to identify ways in which collection centers can get closer to producers so that fewer people can collect these commodities and then move them to the market. Also, in the case of fruits and vegetables, which normally go to sorting plants and to processing packaging plans, is to re-engineer the operation, because these packaging plants are pretty labor-intensive and the social distance is not respected. So we need to find ways in which we can re-engineer the way they sort and they select the fruits and vegetables so that we keep at least the physical distance between workers. So we need to reset the way we think about how we process this food.

There's also the knock-on effect of seasonal workers who can't travel now. You're speaking to us from Rome and this is hugely relevant in Italy, because over the next two months, Italy typically relies on about 200,000 seasonal workers. Now, Italy's one of the hardest-hit countries in the world with both cases and deaths from COVID-19. What does that mean for Italy's food production this year?

And the same applies to France. They are facing significant shortages of labor. That's one of the major problems, that's why I was saying with high-value commodities, it is labor-intensive. And if we don't find the way to supply the needed labor, then sure, you cannot harvest these commodities. So what France is doing is, they are recruiting local people to be able to do the harvest because the process is not so complicated. If they cannot get the labor from international migration, they will have to find ways to get the labor locally. But what we need to try is to minimize as much as possible the loss of their harvest. That would be a food loss. So we need to try to find ways to minimize that. And that's where governments need to find solutions for that.

Maximo, I want to just leave the point that there are some countries that seem to have stable food supplies. But we also know about food deserts, less affluent people who have to rely on substandard foodstuffs, like right here in the US. Countries in Europe see this, as well. Will there be an even greater divide between food rich and food poor in wealthier countries?

We hope not. We hope that their food will keep flowing. If we start seeing export restrictions and constraints in a bigger proportion, then I think is very important to react as much as possible to avoid this. But the commitment up to now is to try to not have those in place. There is no need to have those in place. What we will do if we start doing that is we will be creating the food crisis when there is no need to have a food crisis right now.