People of Filipino descent play an outsize role in the US health care workforce. They’re 1% of the US population, but comprise 7% of health workers. And because so many Filipino Americans are on the front lines of the coronavirus pandemic, it has taken a devastating and outsize toll on their community.

In New York City, a group of Filipinos in the Little Manila neighborhood of Woodside, Queens, is taking care of their own during the pandemic. Their mutual aid initiative, called "Meal to Heal," is bringing free meals to hospitals and health facilities heavily staffed by Filipinos — while also raising funds to help Filipino restaurants struggling because of the stay-home order.

One of the cofounders is Jaclyn Reyes, a US-born artist of Filipino descent. She and another Filipina American artist, Xenia Diente, work on community art projects in Little Manila.

“You can't talk to any Filipino in New York who doesn't know a nurse or a health care worker.”

“You can't talk to any Filipino in New York who doesn't know a nurse or a health care worker,” said Reyes, whose own mother immigrated from the Philippines to work as a nurse in California.

New York City — and particularly Queens — quickly emerged as the epicenter of the coronavirus, with the city reporting Thursday it reached 20,000 deaths.

According to a recent ProPublica analysis of US census data, "in the New York-New Jersey region, nearly a quarter of adults with Filipino ancestry work in hospitals or other medical fields.”

Diente said she worries about all the nurses among her family and friends working despite shortages of personal protective equipment. “It's personal,” she said. 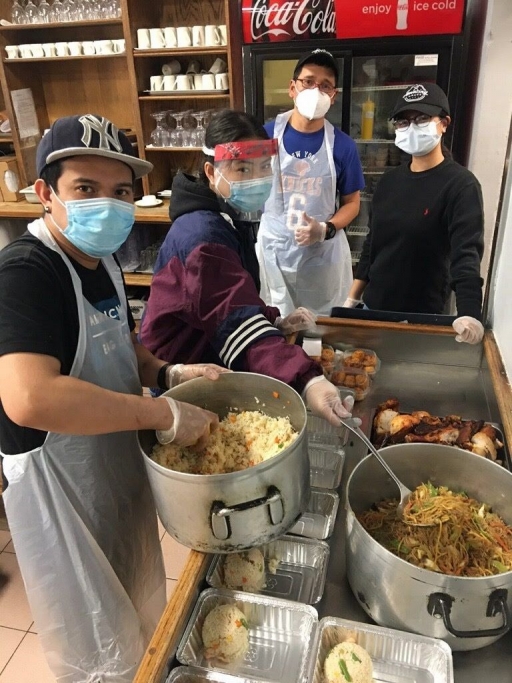 Workers at Amazing Grace restaurant in Woodside, Queens, prepare rice and pancit noodles for delivery to Filipino health workers in the area.

Meal to Heal was born after the city’s lockdown in March upended Reyes and Diente’s art project collaborating with Little Manila businesses. They decided to put their connections with the Filipino restaurants to good use. The pair joined forces with the National Alliance for Filipino Concerns northeast chapter, which works with local nurses and doctors on its community wellness projects. They raised funds to pay the restaurants and donate the meals to workers.

One of the participating restaurants, Amazing Grace, is co-owned by Mary Jane de Leon, who is also a nurse who works in outpatient care. Recently, she was transferred to assist at a nearby hospital’s special intensive care unit for COVID-19 patients and saw the tough work up close. So, she told her restaurant staff to make the donated meals extra-delicious for the nurses. Now, they add special rice or a dessert to the orders.

Business from Meal to Heal is helping Amazing Grace weather the lost business from the lockdown. But mostly, de Leon said, she is thankful her staff can help.

“Through them, we were able to help, at least. We were able to upgrade the food for the nurses, to make them even happier, ” de Leon said.

The Filipino community’s support is keenly felt by Meal to Heal’s recipients, such as Cherry Pabelonia, a dialysis nurse in a Queens renal care center. Before the pandemic, the mostly Filipino staff always shared food. Not anymore.

“Everybody's paranoid,” she said. “It changes everybody.”

But when Meal to Heal’s delivery arrived, she said, they were so excited at getting Filipino favorites such as dinuguan, a pork-blood stew, and pancit, a noodle dish. It was a moment for them all to share the joy in food again.

New York City’s Filipino restaurant scene is deeply linked to the immigration patterns of its health care workers, reflecting how the Filipino community in the city developed.

Their history goes back to the early 1900s when the Philippines was an American colony. Since then, the US has been recruiting Filipinos to fill health care shortages across the country, according to Kevin Nadal, an expert in Filipino American history.

Related: How the Philippines enforces its lockdown

In particular, New York City saw a big bump in doctors and nurses coming to the city after the Immigration Act of 1965, said Nadal, a psychology professor at The City University of New York who wrote "Filipino American Psychology" and co-authored "Filipinos in New York City" with the Filipino American National Historical Society New York chapter.

Nadal says his aunt, a nurse, first lived in Manhattan near the hospital where she worked.

“It wasn't until 1970 or 1971 that she heard … everyone's moving to Queens. ... they could fulfill their American dreams and get homes and not live in apartments anymore,” he said.

Then came the grocery stores and restaurants. In normal times, when the train doors open at the Woodside subway stop, riders immediately inhale the aroma of Filipino barbecue.

That community origin story helped shape the Filipino immigrant identity. Growing up, Diente recalls, “Up until I was 12 years old, I didn't know that Filipino women could be anything but nurses. When I met ... Filipino women that were anything else, my jaw just dropped.” 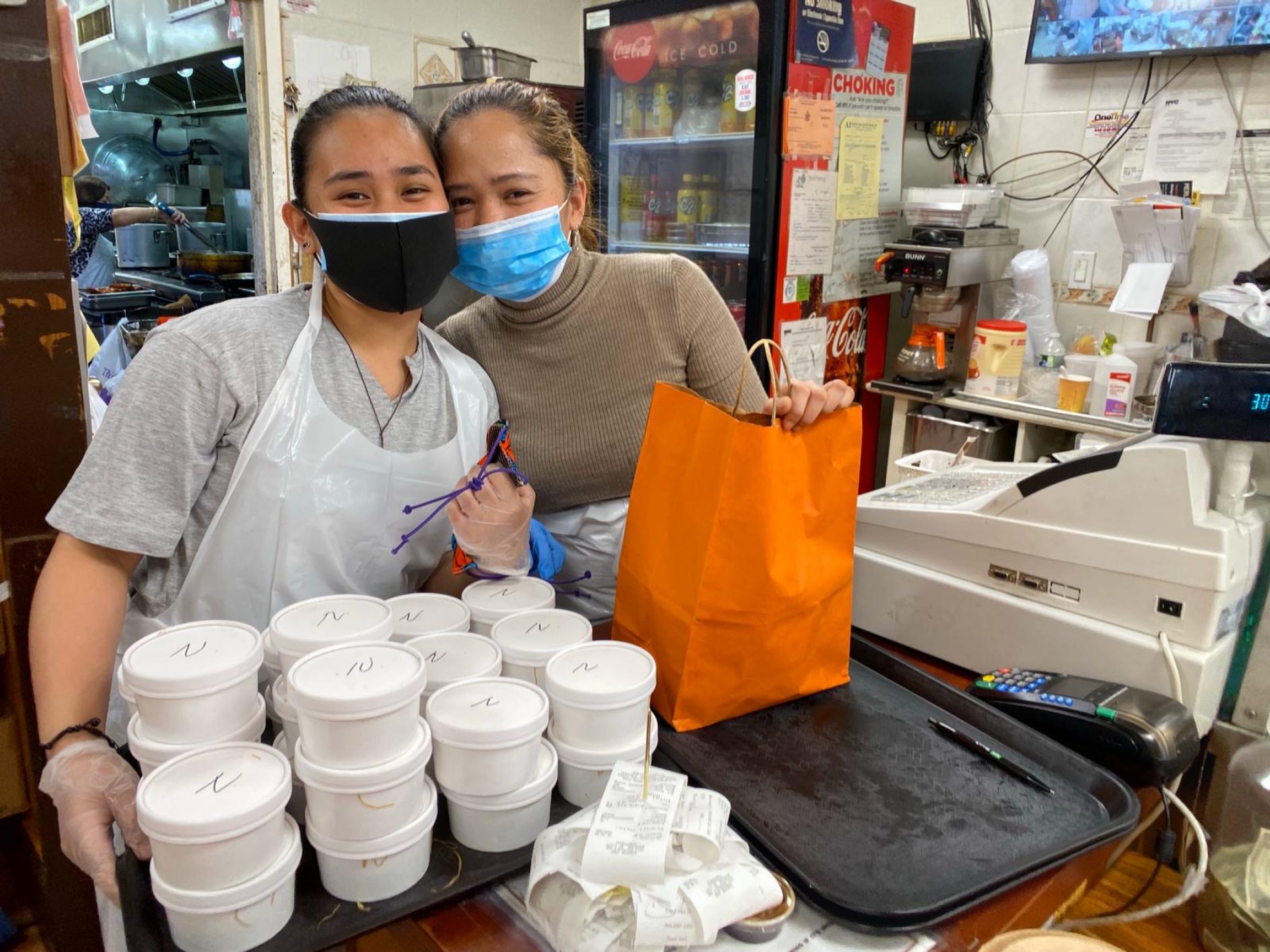 A taste of home

Dominique Flores, a first-year pediatric nurse who got drafted into the intensive care unit, said her colleagues who were self-isolating to protect their families from potential exposure were especially moved by the Meal to Heal meals.

“Since they're quarantined away from their families, they kind of miss the taste of home,” she said, “Sometimes just the comfort of tasting Filipino food is just what they need. Just to feel OK again.”

For now, health workers like Flores can’t thank those who provided the meals in person. Deliveries are a quick handoff: A few volunteers drop off the food to a hospital representative or security staff. The food workers don’t get to interact with the nurses and doctors who’ll eat the meal.

But Flores wants to reassure them.

“You don't even have to be in the front lines to help support us,” she said. “And that really means a lot to a lot of us. So, you might not feel it, but we feel it on our end.”

It’s all part of the Filipino spirit of bayanihan, in which the community comes together. When Filipinos hear bayanihan, many picture a classic scene from rural parts of the Philippines when wooden houses with thatched roofs are moved to a new place — a huge task that takes extra hands.

As Reyes describes it, “If you have someone in a village who wanted to physically move their house, you would get your neighbors and your friends to actually carry your house to wherever you are moving to.”

In these times of isolation, bayanihan brings your home to wherever you need it to be.

Additional audio in this piece came from videos shared by Lugao Kasberg, Xenia Diente and May Madarang.