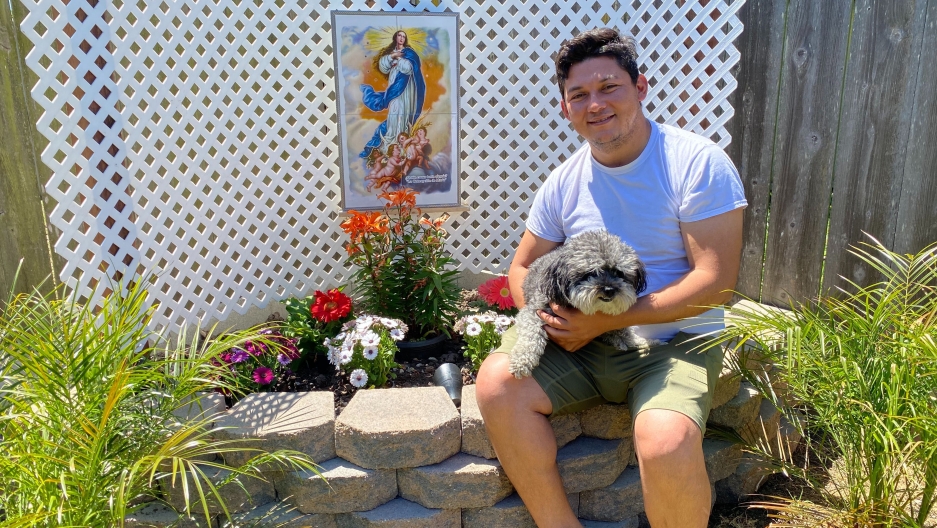 Sergio Armas, a Nicaraguan immigrant living in San Francisco, built an altar to the Virgin Mary in the corner of his yard after the coronavirus pandemic hit.

For years before the coronavirus hit, Sergio Armas hustled to support his parents back home in Nicaragua. By day, he helped manage a small housekeeping business in San Francisco. At night, he served dinners at a popular Italian restaurant with views of the Golden Gate Bridge.

The family breadwinner from afar, he typically wired his parents $300 every month for food, electricity and medicine. His father, 82, is blind and has heart problems. His mother, 68, has a neuromuscular disease and can’t walk without getting winded. They rely on his support to survive.

“I’m the only one with the opportunity to help my family, and I can do nothing right now.”

“I’m the only one here. I’m the only one with the opportunity to help my family, and I can do nothing right now,” he said recently. “I'm so worried about it. That’s my main concern in this moment.”

Immigrants across the globe share his worries. In normal times, millions of small financial transactions take place daily worldwide when immigrants wire a portion of their earnings to loved ones back home. Last year, these remittances totaled more than $550 billion, according to the World Bank.

This year, the economic crisis is wrecking that cash flow. Worldwide, remittances are expected to fall a staggering 20% this year — plummeting by about $100 billion, according to a recent report by the World Bank.

“That is going to rupture an important lifeline to a large number of people,” said Dilip Ratha a lead economist at the World Bank on migration and remittances.

Hundreds of millions will feel the financial hit in countries such as India, China, Mexico and the Philippines, which rely heavily on remittances from expats overseas. The economic ripple effects will also extend to smaller countries, such as those in Central America, along with Kyrgyzstan, South Sudan and Haiti.

Related: A California hospital is translating coronavirus information for immigrants

The fall in remittances is also far greater than the 5% decrease that resulted from the 2009 global recession. The effects of that economic crisis also took longer to hit.

“It’s not comparable in terms of the magnitude and unexpected loss of work within a couple of days,” said Manuel Orozco, senior director of remittances and development at the Inter-American Dialogue, a Washington, DC-based think tank. “In 2009, some people may have waited three months until they got the news. Here, it was mañana.”

In addition, people who receive remittances typically have no other safety net.

“People will not be able to compensate for it by just borrowing from some friends,” Ratha said. “They will have to cut their consumption of food, and they will have to suffer.”

For Armas, receiving federal aid or unemployment benefits from the US government could help him keep his family in Nicaragua from suffering. But he cannot access that help because he does not have a Social Security number yet — a requirement for such relief. He was on the verge of receiving his green card, and thus his SSN when the pandemic hit and disrupted US immigration services.

For now, Armas, like many undocumented immigrants, pays taxes using an Individual Taxpayer Identification Number, or ITIN, which the Internal Revenue Service issues to people who are ineligible for a Social Security number. People using an ITIN are excluded from the $1,200 check most Americans get under the $2.2 trillion stimulus bill passed by Congress in March. So are their spouses and children — whether or not they are US-born — if they file taxes jointly as a household.

These restrictions anger Francisco Silva, Armas’ husband. Though Silva is a US citizen, he is ineligible for relief under the stimulus bill since he and Armas file taxes together.

“If you’re paying taxes, if you are helping out the economy of this country, you should be OK to receive help,” Silva said. “But blocking that? I think it's really discriminatory.”

The pair lives together in a working-class part of Richmond, just across the Bay Bridge from San Francisco, but a world away from the area’s glitzy tech scene.

California recently became the first state in the country to pledge financial aid for undocumented residents affected by the COVID-19 pandemic. It set aside $75 million to support them. A conservative group, the Center for American Liberty, is now legally challenging the funding, arguing that the funds will be administered by nonprofits that are not controlled by the state and that providing unemployment benefits to undocumented immigrants is unlawful.

Related: Immigrants in US detention fear spread of coronavirus

Nationwide, immigrant advocates are raising funds to fill the gap as well, including the National Day Laborer Organizing Network (NDLON) based in Pasadena, California. The organization has launched a funding campaign that prioritizes assisting workers over 60 years old and with underlying conditions that make them more vulnerable to the coronavirus.

Angela Sanbrano, NDLON’s co-executive director, said it is a mistake to deny relief to certain immigrants.

“This situation affects all of us,” she said. “If people do not see that connection, then we are in serious trouble.”

She pointed to a fact made by many economists: When people such as Armas can no longer send cash back to their relatives, those relatives may be forced to leave their homes in order to survive.

“It will create a situation where people are going to say, well, I'm going to come to the United States, too,” Sanbrano said.

These days, Armas finds solace in his garden filled with tomato vines, budding passion fruit and newly planted mint. Pink and purple petunias border a small lawn, which also contains his grill and a patio strung with small light bulbs.

He calls his mother every day. She says it’s hot in Nicaragua, nearly 100 degrees. On a recent call, she sat in a wooden rocking chair holding a damp washcloth to keep cool and to swat away mosquitoes.

“How are things there?” he asked her.

“What do you want me to tell you?” she responded. “ Prices are rising. Rice, beans, salt, sugar — all more expensive.”

After the call, Sergio took a moment to compose himself.

“It's really hard to just think that I don’t know what can happen with them. Expensive medicine, expensive everything over there."

As a stopgap, to help his parents, he is maxing out a credit card that he lets them use in Nicaragua. His husband is helping, too, but now his job is looking shaky.

On Fridays, Armas visits church down the street for a free lunch. And he’s up most nights worrying.

Two weeks ago, Armas finished building a new addition to one corner of the yard: an altar to the Virgin Mary. He arranged a portrait of her framed by white lattice and flowers. At night, he visits the altar and prays.

“I watch the sky, and say thank you for everything,” he said. “Good things and bad things.”

Armas knows he’s not alone. Nearly all of his friends are going through the same thing — and so are all the families connected to them in other parts of the world.