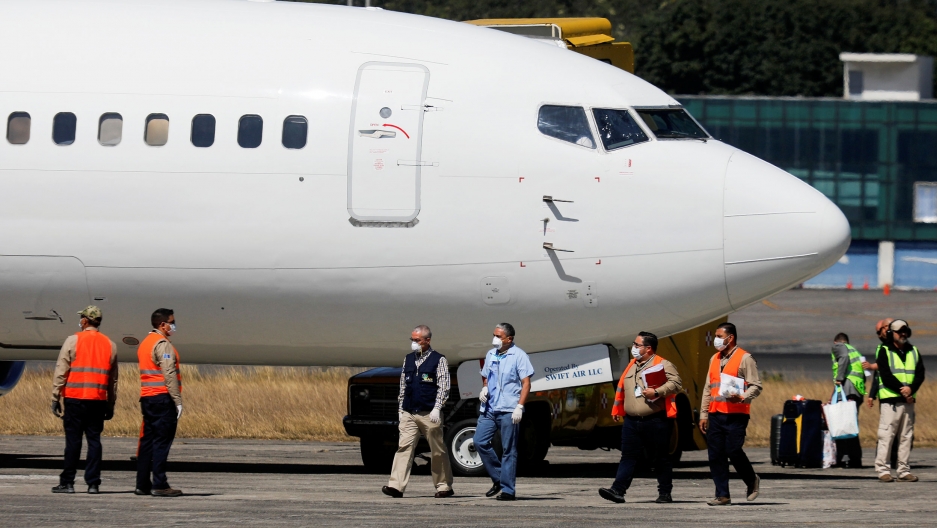 Government officials, wearing protective masks, stand next to a plane carrying migrants deported from the US at La Aurora International airport, in Guatemala City, Guatemala March 12, 2020.

While many countries, including the US, have limited international commercial aviation because of the COVID-19 pandemic, planes deporting people from the US are still taking off.

One such flight left last week from Alexandria, Louisiana, carrying more than 60 undocumented immigrants being returned to Haiti. But at the last minute, several people were held back — because they may have been exposed to the coronavirus.

“I was very surprised,” said one man who was stopped from boarding the flight. “I was on the line to get on the plane and then an ICE officer came up to me.”

He said the Immigration and Customs Enforcement (ICE) officer verified his name and then informed him that he would not be on that flight. The man asked to not reveal his name because he is an undocumented immigrant from Haiti being held in a detention center. His case remains uncertain.

“I was really worried,” he said. “I did come from a lot of facilities where the coronavirus was going around.”

The man says he is worried about many things: Going back to a country he left when he was 12 years old and possibly arriving there sick. He said he has been shuttled through several crowded detention facilities where COVID-19 cases have emerged.

That also alarmed his lawyer, Ira Alkalay. “Since he’s already had multiple exposures to areas that have been positive for coronavirus, it wouldn't be fair to Haiti or to him to put him on a plane where he’s potentially carrying the virus,” Alkalay said.

Alkalay, working with US politicians and activists, managed to keep his client off the plane. But the flight did depart, deporting more than 60 immigrants to Haiti.

“From a public health and medical perspective, it's shocking that these deportations are continuing,” said Michele Heisler, medical director at the US-based nonprofit Physicians for Human Rights and a professor of internal medicine and public health at the University of Michigan.

The flights do not only put people in deportation proceedings at risk, but also threaten to spread the coronavirus to countries ill-equipped to deal with the disease.

Guatemala has temporarily refused to accept flights carrying deportees after some passengers tested positive for the virus. But that pause has been short-lived, and deportation flights resumed on Monday.

“Our call is clear,” said Franciscka Lucien with the Institute for Justice and Democracy in Haiti. “We're asking for there to be a halt to the deportations. Haiti is one of many countries in the region that is facing an uphill battle with this pandemic.”

Haiti’s ambassador to the United States, Hervé Denis, is also against these flights. “We are a poor country. We have the fears that this is [a] possibility that could add to the spread of the virus,” he said in a phone interview.

Haiti, Denis said, has little leverage over the US. “This is always the situation. This is David and Goliath. So what can we do? We are not even David.”

US immigration officials did not grant an interview with The World, however, they have stated that immigration enforcement must continue, pandemic or no. President Donald Trump has also threatened visa sanctions against countries that refuse to accept deported immigrants.

Meanwhile, new Border Patrol guidance in response to the pandemic directs US officials to hastily turn away virtually all migrants and asylum-seekers, including children, at the US-Mexico border. That has forced many Mexicans and Central Americans to return and stay on the Mexican side of the border — often without stable housing or shelter, and at risk of threats from criminal organizations.

Immigration officials carrying out deportation proceedings say they’re following health protocols, including taking immigrants’ temperature before they board planes. However, some medical professionals believe that is not enough.

Julmisse is relieved that so far Haiti has only about 40 confirmed COVID-19 cases compared to more than 580,000 in the US. She hopes the numbers stay low, but worries that people coming from US detention centers could drive those numbers up.

The Haitian immigrant who was stopped from boarding the plane in Alexandria is now in detention in Pine Prairie, Louisiana. He worries he could be one of those people carrying the coronavirus. He was kept from the flight because he was exposed to COVID-19, but he has not been isolated or quarantined. He sleeps in a room with 24 other men in bunk beds placed 3 feet apart, he said.

“We clean every, every spot,” he said, adding he tries to clean everything using whatever bits of soap he can get. He knows the US is continuing to deport people and that more flights to Haiti will be scheduled soon. It’s unclear whether or not he’ll be forced to board the next plane heading out.