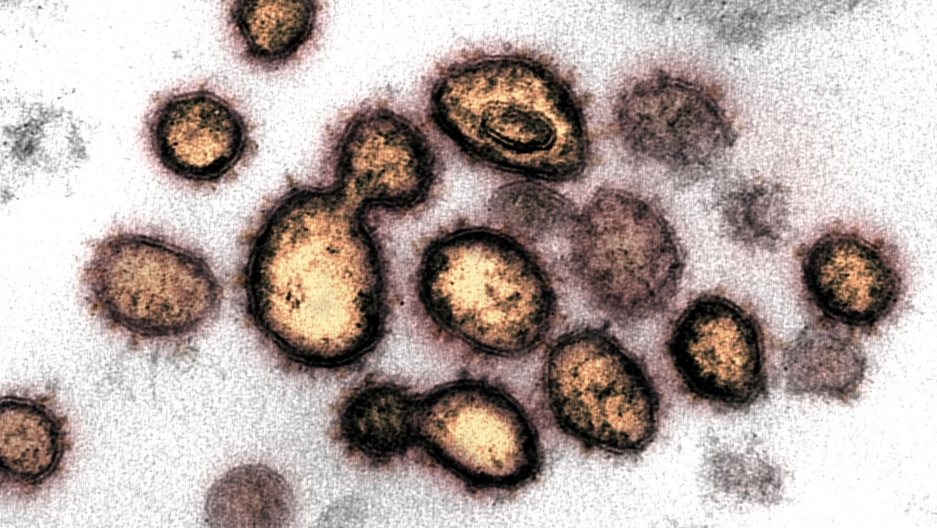 This transmission electron microscope image shows SARS-CoV-2, also known as the novel coronavirus, the virus that causes COVID-19, isolated from a patient in the US. Virus particles are shown emerging from the surface of cells cultured in the lab. The spikes on the outer edge of the virus particles give coronaviruses their name, crownlike.

If the times we are living in are making you feel dizzy, there is a reason for that.

“Coronavirus took a lot of things that we knew were going on — and we knew were troubling — and intensified and sped them up,” according to Ian Bremmer, president of Eurasia Group and GZERO Media.

The pandemic has turned some of the world’s fault lines — global inequality, segregated societies, a power vacuum on the world stage, and US dependence on China — into chasms that are not too difficult to imagine being swallowed up by.

Relations between the US and China have been fraught for a long time. Eurasia Group has called the divorce between the two countries in the technology sector, “The Great Decoupling,” and “the single most impactful geopolitical development for globalization since the Soviet Union collapsed.” Now, the coronavirus is set to make those tensions worse, as the pandemic has painfully exposed our over-reliance on China for medical supplies, pharmaceuticals and manufacturing.

The vulnerability of our medical supply chain was demonstrated when Massachusetts Gov. Charlie Baker went to great lengths, reaching out to New England Patriots’ owner Robert Kraft to borrow the team’s Boeing 767, in order to secure more than a million N95 masks from China that were desperately needed for the state’s health care workers.

Following the 2008 financial crisis, inequality and anti-establishment feelings increased in the US, Europe and around the world, and led to movements such as Occupy Wall Street, the Tea Party and Brexit. Presently, with a massive global economic recession ahead of us, the gap between the haves and the have-nots will only get bigger, according to Bremmer.

The contrast between the top 10% and those living on the margins is startling. Can we really say we are all “in it together” during this huge global crisis when the world’s elite live such separate lives?

“Their ability to segregate themselves away from the dangers of this virus are pretty great,” Bremmer explained. “I mean, if you’re working in the knowledge economy, you can work from home and you can do so pretty comfortably.”

He predicts that further displacement of workers caused by the crisis will disproportionately hurt the poor and middle class and will be “hard medicine for a lot of people that have lived and grown through globalization which generally ... meant more and better in so many big global trends for everyone.”

If you are looking for some sort of grand Marshall Plan, to help us all recover from the difficult economic times ahead of us, you are out of luck. About a decade ago, Bremmer identified an absence of international leadership and a power vacuum on the world stage which he named “G-Zero.”

“It is truly unfortunate that in a G-Zero world, we happen to have the biggest crisis since World War II,” he remarked.

United Nations Secretary-General Antonio Guterres has expressed grave concern about the absence of international leadership in response to the pandemic, and many have been especially frustrated by the lack of American global leadership. However, Bremmer said the problem extends well beyond the Trump administration.

Nonetheless, the political scientist expects this moment to be transformative and, “definitional in the lives of an entire generation of people,” and particularly young people. He believes it will cause them to demand much more from the government, all of which could create a tipping point in the US.

"We could become much more progressive and we could make capitalism much more humane and we could redistribute a lot more,” Bremmer said. Or we could, “become a lot less representative and revert back to a lot fewer people who are part of the political franchise.” Both will be real options for the US, he added.