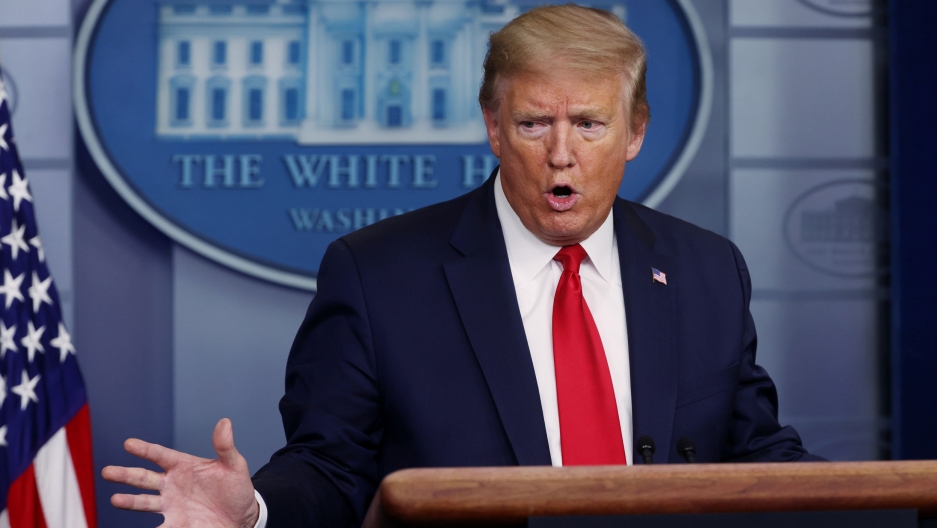 Italy co-hosted a global online summit Monday to raise money for coronavirus treatment and vaccine development in which more than 30 countries attended and pledged more than $8 billion. The host, European Union Commission President Ursula von der Leyen, called it a defining moment for the global community

"At a time when we are sitting further apart than usual, the world has shown it is standing closer together than ever before," she said. "This is the true power of unity and of humanity."

But there were notable absences at the summit of global leaders: the US, China and Russia.

Related: World leaders pledge $8 billion to fight the coronavirus but US steers clear

Nicholas Burns is a former career foreign service officer who rose to become US ambassador to NATO and then undersecretary of state for former President George W. Bush. He's now at Harvard University's John F. Kennedy School of Government and an unpaid adviser to the campaign of presumed Democratic nominee Joe Biden. Burns spoke with The World's Marco Werman about the dangers of the US disappearing from a leadership role on the world stage.

Marco Werman: There's been no explanation, Nick, from Washington, as to why it did not participate in this summit. How unusual is it for the US to have been absent at a meeting at this level?

Nicholas Burns: Marco, it is unusual. In fact, you know, this is the first time since 1945, when the United States became the undisputed global power, that we've not tried to lead or even been present in the middle of a major global crisis. And this is an incredible crisis with the pandemic and with the global economic collapse that's underway. And so it's been shocking, I think, for people around the world to see the United States so inert.

There's a perception that the United States, with all of our power — our economic power, our scientific and technological power — is focusing just on itself and not focusing on the global campaign, which is, of course, to bring countries together, to share information about a vaccine, to decide how that vaccine should be distributed equitably among several billion people, potentially. And I do think it's hurt the perception of the United States as the global leader. At the same time, as, you know, the Chinese government is making a major effort — a lot of it may be insincere, a lot of it propaganda — but a major effort to portray itself as engaged with the rest of the world. So quite a contrast, I think, for countries to look at Washington on the one hand, Beijing on the other.

So besides this kind of disengagement, commentators, and we should also say comedians, around the world are pointing to perceptions of incompetence in the federal government's handling of the crisis. What are you hearing from your diplomatic colleagues around the world?

Well, I mean, I think people are shocked that our infection rate is so high, that our death toll is so high. I think people around the world expected that the United States would be organized, that we would be on top of our game. I think there is a perception among people who follow us closely that our governors — many of them have done quite well. But the thought is that the federal government has been — with the president certainly defensive and sometimes misinforming the public, as when he said that one possibility would be to inject disinfectant — this doesn't strike people as how the United States normally operates in the world.

And so people expect more from us. They're not seeing that. I think for countries around the world that have made a supreme effort to lock down their societies — Italy and Spain, Germany, South Korea, Singapore, Australia, New Zealand — they look at the United States and they see an uncoordinated response, particularly from the federal government. That does hurt our credibility.

You mentioned the injection of disinfectant. A friend of mine in London was struck by a recent analysis of how Trump uses language — from that disinfectant misinformation, potentially fatal misinformation, to giving false hope about the discovery of a vaccine. My friend's question was, if it's so obvious what the president is up to, how does he keep getting away with this stuff? You must get that question a lot from your colleagues. How do you answer?

Well, I think these press conferences have been a puzzle for people around the world, and maybe they have for people inside the United States as well, because there's a lot of politics in these press conferences. One of my students said to me several weeks ago, "You know, for all of the hours of those press conferences, one word of sympathy for the Italians when they were in the worst of it in March or the Spaniards from your president would have gone a long way." It's the kind of thing that George W. Bush would have done automatically, that Barack Obama or George H.W. Bush would have done automatically. But it's lacking now. Countries are accustomed to the United States, not just leading militarily or economically, but being the conscience of the world, the human rights leader. And that's certainly not the case in this conflict.

There is a way to act in a crisis. Where the Great Recession hit us very hard in September, October 2008, President George W. Bush activated the G20. This was a group of the 20 largest economies in the world to align our policies. Well, we're in an economic collapse around the world, but there's been no attempt by the United States or China, to be fair, to activate that kind of global coordination mechanism, which is not charity. It's actually in the interest of Americans that we not have to bear the burden of all this ourselves, our taxpayers, that we actually want to be working with countries around the world to ask them to make sacrifices. And so that lack of coordination, I think, has also been surprising to our best friends around the world.

You were in the Bush administration, Nick, at the time of Hurricane Katrina. The delayed and ineffective response at the time, as you remember, it shocked the rest of the world. Is this current crisis really that different?

Well, I think it's on a bigger stage. I certainly remember, Marco, I was at the State Department as undersecretary during Katrina. And what was shocking to see so many countries try to come come to our aid and deliver humanitarian assistance to the wealthiest country in the world. And to see the failure of our government in New Orleans, frankly, was a really hard thing to take as an American official. This is a much bigger crisis, obviously. The pandemic theoretically makes 7.7 billion people, everybody on earth, less secure, fearful. They're looking for leadership, they're looking for certainty, they're looking for help, and at least they think they're not getting it from the United States.

I think the issue that has vexed people the most, perhaps, is the World Health Organization. And let me say, I think the Trump administration is right to have concerns about the performance of the World Health Organization. They covered for China. It didn't ask China tough questions early on. But for the Trump administration then to withdraw our funding — it's like we're withdrawing funding from the fire department in the middle of a fire. And what it means is that the United States will have less influence in the one organization that is the global clearinghouse on these really critical issues for Americans. Like, how do we find a vaccine? How do we coordinate? How do we decide how to distribute that vaccine across the world? If one is found, there'll be time to reform or maybe even redo the World Health Organization, maybe think about a successor organization, but that time is not now.

And it's that kind of thing is impetuous, peremptory, "Let's withdraw all funding. Let's denounce China. Let's call it the Wuhan virus." What most of the world is hearing from the White House are these very tough, divisive statements, but not a lot of action to help around the world. And that's not how Americans should act in a crisis like this, we're certainly better than this.

There's a concept in the digital world, Nick, that you may know, about bleaching your reputation online. How does a post-Trump administration put Humpty Dumpty back together again and fix what we've been seeing these past few years.

I think by actions. I mean, certainly, you know, the United States can recover from this because of our enormous power in the world and our alliances and our long term friendships. But I don't think words enough will do it, even if there is a change in administration or if President Trump is reelected and he wants to get off on a new foot with the rest of the world. They're going to have to see actions. We've left the climate change agreement. We've left the Iran nuclear agreement. We've really been absent on the fight against the coronavirus globally. Countries and people, citizens — who now have a lot of, you know, freedom to express themselves through Twitter and other social media, Instagram — they want to see, I think, and they should want to see the United States be a good global citizen.