José Valdes held his 3-year-old twins’ hands tight as they walked slowly down a street in central Madrid. Valdes wore a plain surgical mask, while the girls’ faces were covered with prints of cartoon dinosaurs and puppies. This stroll was special — it was the girls’ first foray into the outside world in six weeks.

On April 26, children 14 and under in Spain left their homes for the first time since mid-March as a reward for numbers of new cases of the coronavirus falling substantially across the southern European country.

From 9 a.m. to 9 p.m., kids can now walk, cycle or ride their scooters for up to an hour as long as they are accompanied by a responsible adult. For Valdes, it’s a relief.

“These weeks have been a little bit chaotic. They aren’t good at entertaining themselves, and I have had to lock myself in the bedroom to work. With a baby as well, it’s quite hard to organize ourselves.”

“These weeks have been a little bit chaotic. They aren’t good at entertaining themselves, and I have had to lock myself in the bedroom to work,” he said. “With a baby as well, it’s quite hard to organize ourselves. [The twins have] been looking out the window a lot, and we have been trying not to change their routines, and to do activities with them.”

The relaxation came as Spain, one of the countries worse hit by the COVID-19 pandemic, registered its lowest daily increase in the coronavirus death toll in more than a month — bringing the country's total number of COVID-19 deaths to 23,521 and 220,000 cases as of Monday.

Spain was one of a handful of nations worldwide to impose a total ban on children's exercise outdoors, keeping them cooped up 24/7. In announcing the easing of this restriction last week, the health minister, Salvador Illa, initially said minors would only be able to follow adults to the supermarket or pharmacy. That was met with an outcry by frazzled families and led to Illa reversing course and letting children play again outside.

Some commentators wryly noted this gave them the same rights as dogs that have walked outdoors (with their owners) since Spain’s state of emergency was formally announced on March 14.

For many, the joy of fresh air is complicated by the difficulty of explaining why children shouldn’t touch anything outside, and why they constantly have to wash their hands. Parents are also wary of raising a generation of germaphobes.

Begoña, a teacher who did not give her last name, was the first in her household out the door when the restrictions were lifted, accompanied by 4-year-old Pablo, 2-year-old Santiago, and baby Lucas. She went armed with masks, hand sanitizer and instructions for her children to keep 6 feet away from other pedestrians. 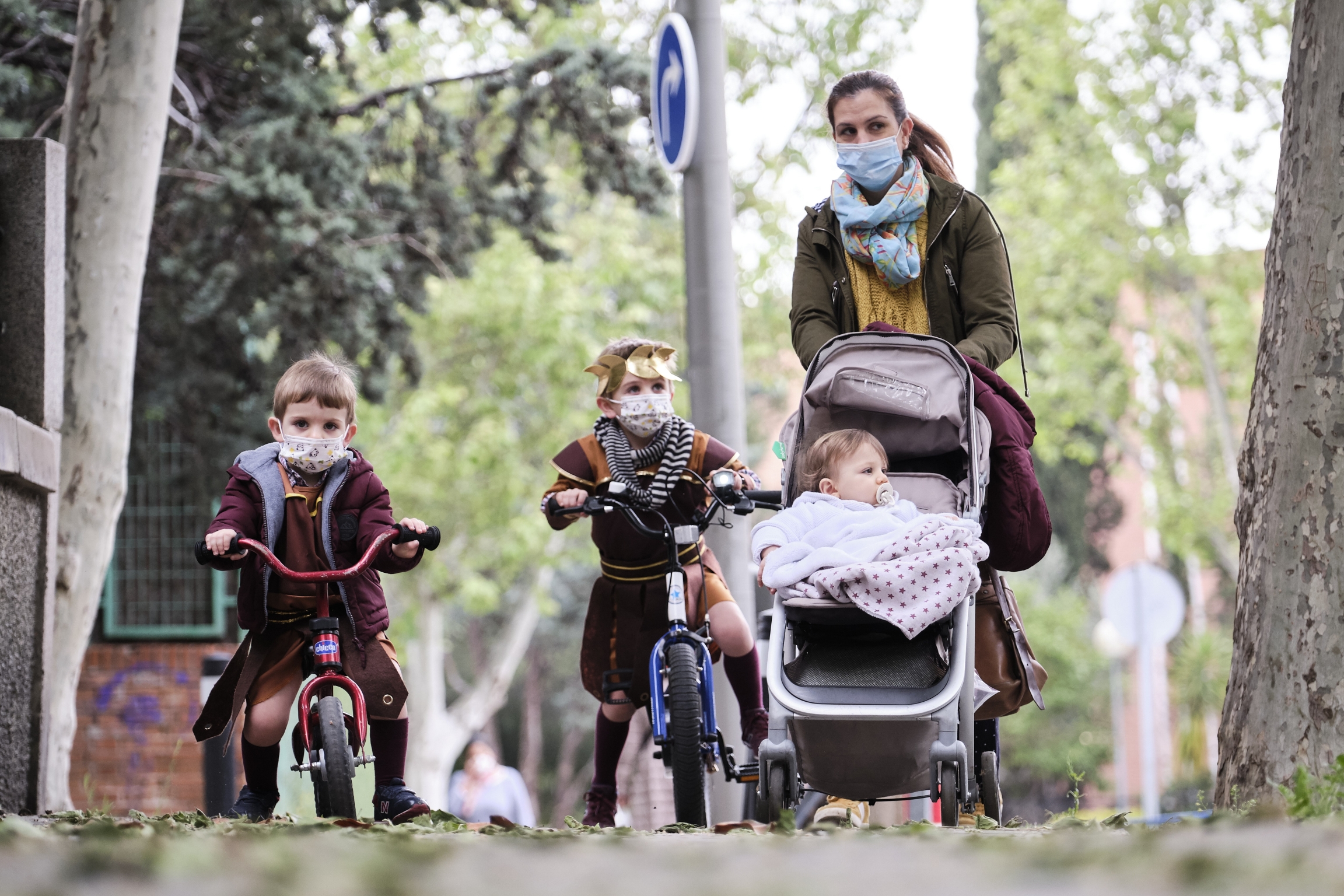 Begoña, a mother of three, takes her children for a walk on the day Spain lifts restrictions on children outdoors due to the coronavirus pandemic.

“They can blow off some steam on their bikes, and we can go back home. They need to run around. If they aren’t able to do that, they are climbing the walls."

“They can blow off some steam on their bikes, and we can go back home. They need to run around. If they aren’t able to do that, they are climbing the walls,” she said.

Older kids are bored, and also missing their friends from school.

Related: CES convention may have spread coronavirus throughout the US — and world

Ten-year-old Julia Pinilla makes video calls to her friends every day “to see what they are doing.” Like her, they aren’t usually up to much.

Julia’s 13-year-old brother Rafael meets up with his friends virtually, on his PlayStation. He couldn’t believe his legs felt tired after a 20-minute walk, he said, as he used to play soccer for hours in his “before-the-virus” life.

While these kids have weathered the weeks at home with remarkable resilience, not every child is able to cope with the disruption to their routine and the isolation from friends and extended family.

Dr. Connie Capdevila Brophy, who specializes in clinical psychology and has over 30 years of experience working with children in New York City and Barcelona, has observed the toll on families with concern.

Children “have endured the most severe measures,” she noted, because adults “have been able to go out to buy groceries, to the pharmacy, to throw [out] the garbage, to walk the dog.” 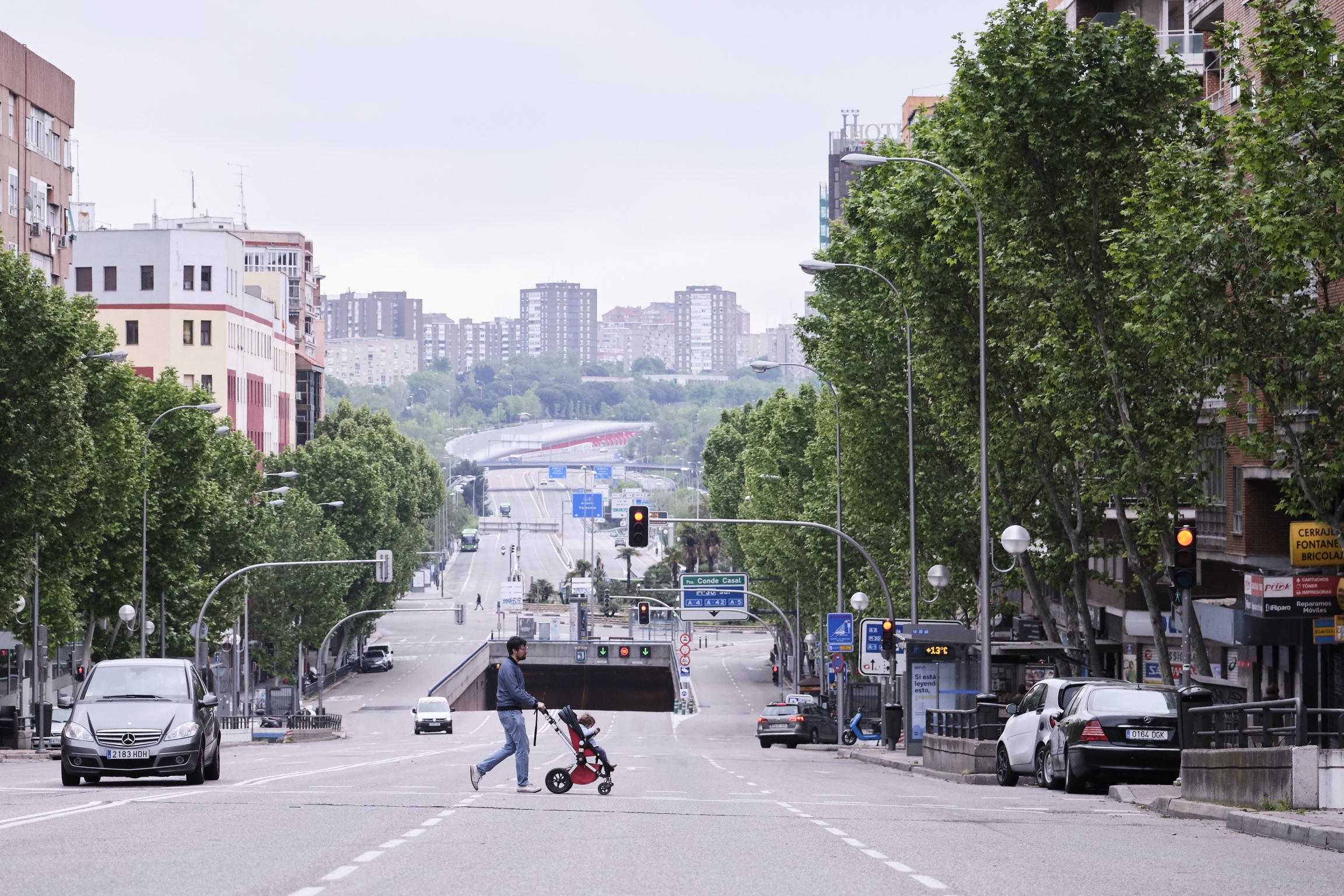 A man walks a baby across the street in a pushchair in Madrid as Spain lifts restrictions on children outdoors due to the coronavirus pandemic.

She applauded the “exemplary behavior” of most kids but knows many more have struggled.

“There has been an increase in some difficulties, some phone calls to professionals about irritability and difficulty concentrating, sleep problems and video game addiction.”

“There has been an increase in some difficulties, some phone calls to professionals about irritability and difficulty concentrating, sleep problems and video game addiction,” she said.

Children also absorb their parents’ stress, she said, whether from losing a job or worrying about their health. Finally, many children have suffered the loss of a family member from among the 23,000 Spaniards who have so far lost their lives to COVID-19.

Capdevila Brophy serves as a board member of the Official College of Psychology of Catalonia, which issues recommendations to the government on children’s mental health. She wants adolescents aged 14-18 to be included in the next round of easing measures, and for greater attention to be paid to abuse cases falling under the radar.

Spain’s Anar Foundation, which offers confidential support to children via its chat line, has reported a spike in messages since the lockdown began. More than a third relate to cases of physical abuse.

Allowing children to play again outside should help Spaniards feel that their country is slowly turning back to normal. But the kids are a test case: The government is watching to see whether COVID-19 case numbers shift upward following the easing of restrictions, and have threatened to reintroduce the stricter lockdown if they do.

Meanwhile, adults are watching longingly out the window. If cases of the coronavirus keep falling, adults will be allowed to run and cycle outdoors soon too, and not just leave the house to buy groceries or medication. For now, however, the kids rule the block.