Sarah Gardiner, a registered nurse for 35 years, has seen a lot of people die. But nothing prepared her for the weekend in late March when the novel coronavirus started taking the lives of residents at the Pinecrest Nursing Home in tiny Bobcaygeon, Ontario.

By the end of that first weekend, 10 people were dead. After that, the situation got even worse.

“The minute we dealt with one person’s death, then there was someone else down the hall who looked like they were really, really close and we better get on the phone and make sure the family is aware that this is probably quite imminent. And do we have the right medication? I have to call the doc and get them some morphine,” Gardiner said. “There was just no time. It just kept coming and coming and coming.”

In about two weeks’ time, 29 residents and one volunteer caregiver had died. That’s nearly half the number of people who lived at Pinecrest. The cluster of COVID-19 deaths is one of the biggest outbreaks in Canada — and was an early sign of what was to come in similar facilities around the world.

Since then, long-term care facilities have emerged as the front line in the fight against the coronavirus in Canada. The country's top public health official, Dr. Theresa Tam, said last week that half of all the COVID-19 deaths in Canada were in long-term care facilities. The virus has killed nearly 2,300 people in Canada. In the two largest provinces, Ontario and Quebec, elderly patients in nursing homes make up about three-quarters of all the deaths from COVID-19.

The death toll has exposed the stark conditions in which many nursing home residents and staff live and work, even in the best of times.

“This is a sector in our society that has been neglected for years if not decades,” said Dr. Nathan Stall, a geriatrician at Mount Sinai Hospital in Toronto. “It’s sort of a perfect storm for catastrophe, really.”

Many countries have seen a disproportionate number of COVID-19 deaths in nursing homes. Dr. Hans Kluge, the World Health Organization’s regional director for Europe, said as many as half of all the coronavirus deaths in Europe are residents of long-term care. Authorities in Italy, Spain, France, the US and Quebec have launched investigations into how facilities responded to the crisis. 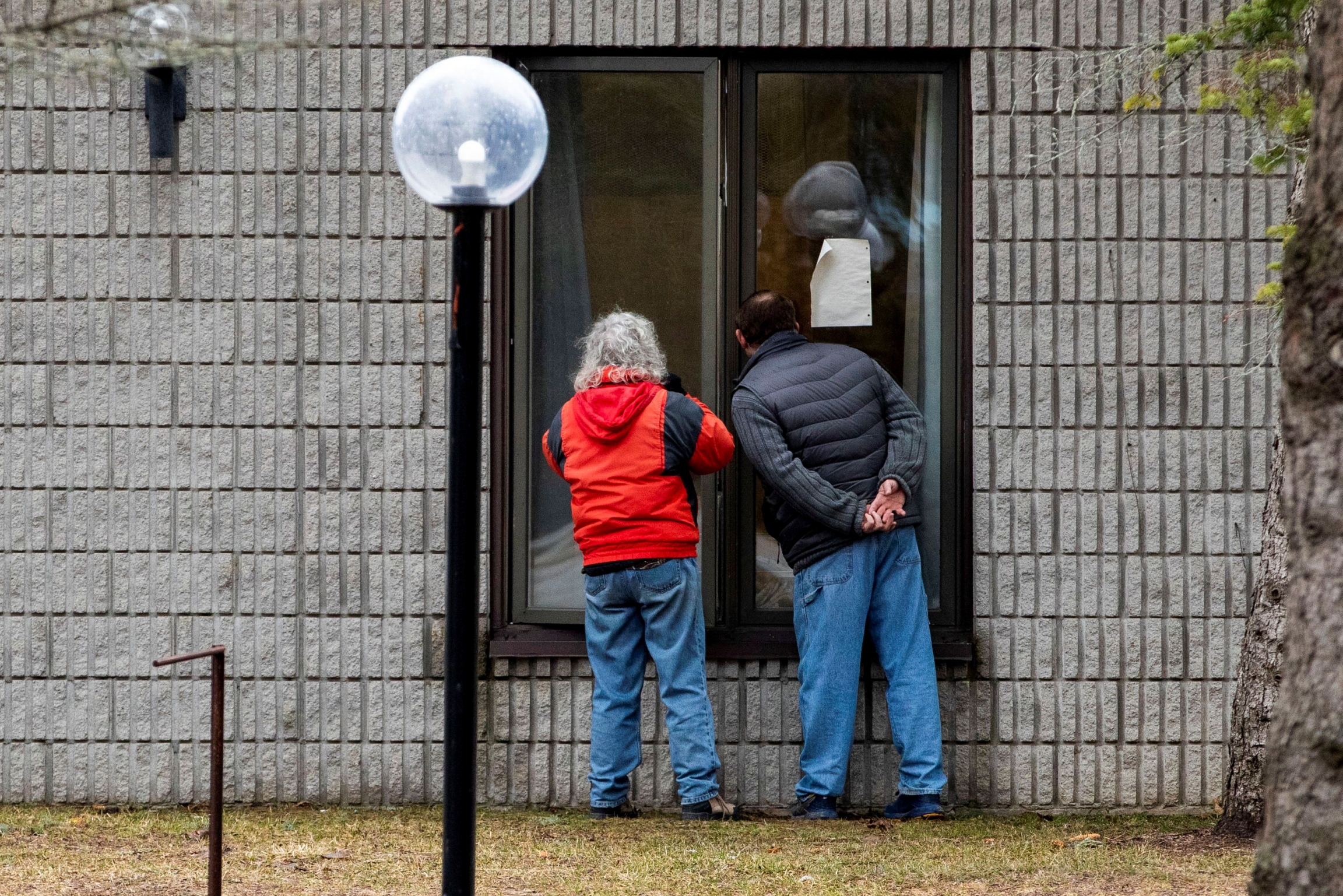 Two people speak to a resident through a window at Pinecrest Nursing Home after several residents died and dozens of staff were sickened by coronavirus disease (COVID-19) in Bobcaygeon, Ontario, Canada, on March 30, 2020.

Stall says most governments in Canada and around the world were slow to recognize the pandemic’s risks at nursing homes. The focus was on hospitals, intensive care beds and equipment shortages.

Even before the pandemic hit, Canadian long-term care facilities for the elderly have been starved of funding. Provincial governments pay for basic nursing home care. The demand for services has increased as the overall population ages, but the level of financial support hasn’t kept up.

Stall says that has lead to a myriad of problems. They include outdated physical infrastructure and a lack of expertise for things like infection control. The homes are chronically understaffed and front-line workers typically work part time with low salaries and no sick benefits. Many personal care workers work at several homes to make ends meet, and Stall said the lack of sick benefits encourages them to come to work when they should stay at home.

Pinecrest Nursing Home is one of those outdated and chronically short-staffed nursing homes. It has only a few private rooms. Most of the others are home to as many as four residents each. Gardiner said that made it impossible to isolate sick patients when the coronavirus hit.

“In four-bed rooms, all you really could do is pull the curtain around them and try to manage them as best you could in that very small space and hope not to contaminate the other residents in the room.”

“In four-bed rooms, all you really could do is pull the curtain around them and try to manage them as best you could in that very small space and hope not to contaminate the other residents in the room,” she said.

Things got even more complicated when many staff members got sick. Gardiner says at one point, there were two personal care workers available to look after more than 30 residents and one registered nurse to assess patients, administer medication and contact physicians, family members and funeral homes.

Hundreds of nurses and personal care workers have contracted the virus, and many nursing homes in Ontario and Quebec are still desperately understaffed, partly as a result of efforts to contain the pandemic. In Ontario, the government has temporarily banned nursing home staff from working in more than one facility to prevent them from inadvertently spreading the virus.

The Canadian government said it would send in military personnel to help. Canadian officials have also promised hundreds of millions of dollars for more testing, cleaning and staff at the homes. The government also said staff who’ve had to give up multiple part-time jobs to comply with the new restrictions could be eligible for unemployment benefits.

Gardiner says she hopes those rules will become permanent and that the Canadian government will introduce nationwide regulations governing nursing homes.

In the meantime, residents at Pinecrest are forced to mourn their housemates in isolation. Relatives are still not allowed to visit.