In Beirut’s southern suburbs, young men from Hezbollah’s Islamic Health Society spray disinfectant, filling the neighborhood with the heavy smell of chlorine. Nearby, paramedics in bright green protective gowns pose in front of a row of ambulances.

This Hezbollah's latest front line — not a battlefield, but medical facilities and test centers for COVID-19 — and they’ve invited dozens of journalists to tour it.

“This gathering is to tackle Hezbollah’s accomplishments and steps being taken to confront the corona epidemic,” said Hussein Fadlallah, Hezbollah’s representative for the district of Beirut, as he stood in front of the flags of both Hezbollah and Lebanon.

But Hezbollah — a Lebanese political party and militant group which is considered a terrorist organization by the US and other Western countries — is not alone in its response to the pandemic. Most of Lebanon's traditional political parties have launched their own campaigns in the wake of the virus, sending out disinfectant crews branded with logos and party flags in what sometimes seems like a competition to sanitize the streets. Political party leaders have even announced personal donations to the COVID-19 response on local television.

Many of Lebanon's current political parties rose in power in a time of crisis — Lebanon’s 15-year civil war. The Taif Agreement that ended the war in 1989 solidified party power by entrenching a sectarian government system that prioritizes sect-based power-sharing over democratic representation. In wartime, and the decades since, these parties have remained strong through a combination of patronage — providing goods, financial support and services like health care — and sectarian rhetoric.

But before social distancing made protesting too dangerous, Lebanese had been in the streets for months, demonstrating against the country’s political elite, traditional political parties, and the sectarian governmental system. Those protests made many question the parties' omnipresent role in society, the economy and government.

Now the novel coronavirus presents an opportunity for those political parties to reassert their influence.

“Hezbollah, just like the other major political parties, has seen an opportunity in the coronavirus crisis to present themselves as protectors of their constituency.”

“Hezbollah, just like the other major political parties, has seen an opportunity in the coronavirus crisis to present themselves as protectors of their constituency,” said Mohanad Hage Ali of the Carnegie Middle East Center in Beirut.

Everyone one is doing it, but Hezbollah is simply better organized and better funded than Lebanon’s other political groups, he said. “It’s an effort that showcases, in the case of Hezbollah, how capable the organization has become after the Syrian conflict.”

Hezbollah was founded by Iran’s Revolutionary Guard in the 1980s to resist Israel’s occupation of south Lebanon, but most recently the group has fought in support of President Bashar al-Assad in Syria, losing hundreds, possibly thousands, of fighters in battles against opposition groups and jihadist like ISIS. The war in Syria is winding down, but the war against COVID-19 is just ramping up. Hezbollah says it is mobilizing 25,000 people to fight the pandemic including doctors, nurses and frontline medics.

“We have shed our blood in resistance,” said Fadlallah, Hezbollah's Beirut representative, “and we will not surrender in front of this epidemic. We will fight it with all we have.”

There is fear that Lebanon’s health infrastructure won’t be able to handle a significant outbreak of the virus that has destroyed some of the world’s best health systems.

In Lebanon, the health system has long been weak and highly privatized. It’s been further eroded by a financial crisis that has devalued the local currency, the Lebanese lira, and made it difficult to import medical supplies. 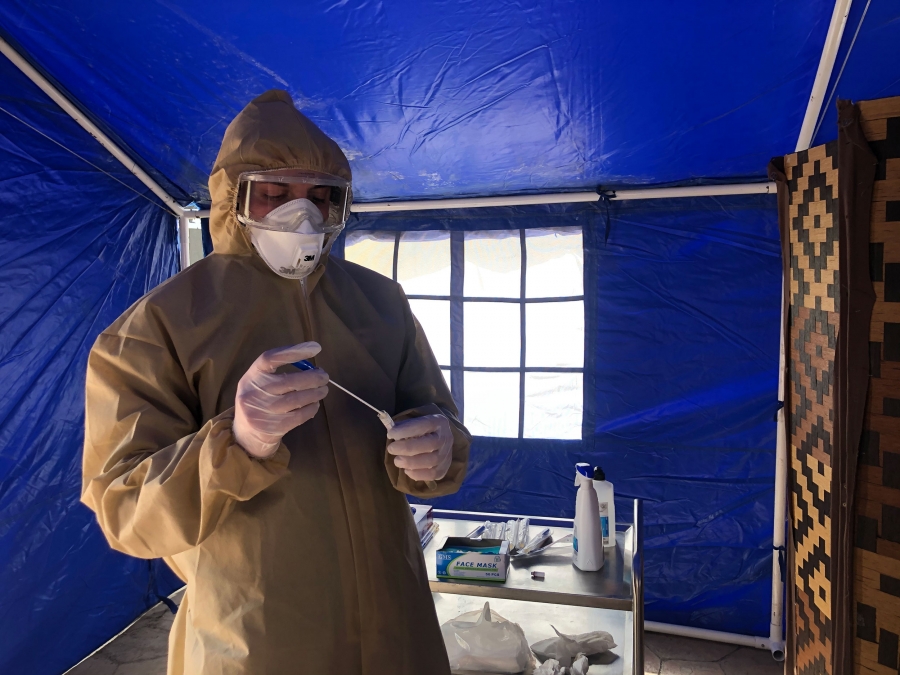 A nurse in protective gear demonstrates how COVID-19 testing will be carried out in a Hezbollah-organized facility in Beirut, Lebanon.

During Hezbollah's press tour, medical staff showed off a series of tents for diagnosing and testing potential coronavirus cases outside a health center. Nearby, the basement of a local mosque has been turned into a sorting center for food and other basic goods for needy families.

Nearby walls displayed posters of Hezbollah’s leader Hassan Nasrallah and some of the young men who have died fighting for the group.

Hezbollah says these centers are not just for their supporters and that the group is not trying to replace the state, but rather help relieve pressure on Lebanon's health system.

“If someone has symptoms, he can come to the corona test for free,” Fadlallah said. “These centers are everyone.”

Lebanon needs all the help it can get. But analysts say to be effective, efforts need to be coordinated, centralized and state-led.

“We’ve been hearing from US officials in the last years that Lebanon needs some sort of chemotherapy. Chemotherapy in the sense that the whole of Lebanon should be shaken in order for Hezbollah to suffer,” says Hage Ali of the Carnegie Middle East Center. “In reality, while [the US is] depriving Lebanon of much-needed funds for the state to recover from the financial crisis, this has led to Hezbollah being more and more emboldened, while the state retreats in its capacity and capability.”