South Korea has won praise for how it's flattened the curve of COVID-19 infections. But a rise in imported cases threatens to roll back some of the country’s progress.

Passengers who land at Seoul's Incheon International Airport are tested if they show COVID-19 symptoms or have arrived from Europe. If need be, they're hospitalized. Everyone else is allowed to enter the arrivals terminal, where staff clad in hazmat suits direct them to private buses and trains people are encouraged to use instead of public transportation.

Authorities say the majority of inbound passengers are South Korean citizens who have come home as the number of local coronavirus cases have decreased. But because many have returned from countries where the disease continues to rapidly spread, some have unknowingly brought the virus back with them, officials say.

“We are continuing to witness an increase of patients here in Korea, and we cannot let our guards down as of yet,” Kim Ganglip, South Korea’s vice minister of health, said during a televised COVID-19 briefing Wednesday.

Roughly 6% of the nation’s approximately 10,000 coronavirus cases originated overseas or were transmitted to people who came into contact with someone who recently came back from abroad, according to data released by the Korea Centers for Disease Control (KCDC) Friday. 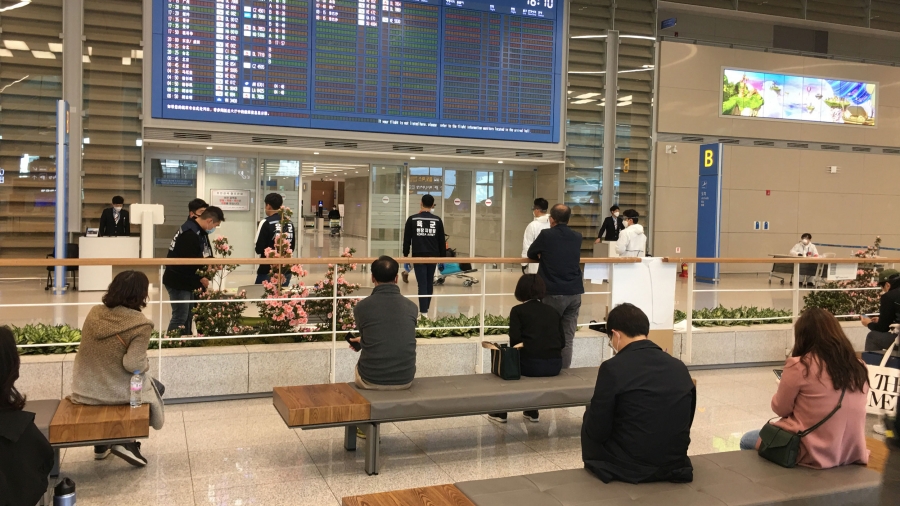 A terminal at Incheon International Airport near Seoul, South Korea. South Korea has kept its borders open as many other countries shut their’s down during the COVID-19 pandemic.

Other governments that have largely been able to contain the pandemic, including China, Singapore and Taiwan, also report an uptick in new cases due in part to returning nationals.

But while an increasing number of countries are tightening their borders in an effort to halt further infections, South Korea is taking a different approach. It continues to allow inbound flights while heavily relying on the honor system, backed up by government surveillance, to keep the curve flat.

As of April 1, all arrivals to Korea, regardless of nationality, must self-quarantine at their homes for two weeks. Those without a local residence will spend the time at government-run facilities at their own cost — roughly $80 per day.

Kim, the vice minister of health, says for the sake of the community’s safety, this isolation order must be followed.

“We will abide by the principle of non-tolerance for those who fail to comply with self-quarantine measures,” he said during the same briefing. That could mean an $8,100 fine, a year in jail or deportation.

A screenshot of the health check app that all arrivals to South Korea must download to their phones.

All recent arrivals must also download a KCDC-linked app onto their smartphones before they are permitted to pass through airport immigration.

Users are required to input personal data, such as their addresses, phone and passport numbers. And for 14 days, they must answer basic health questions — what is their temperature, do they have a cough, sore throat or trouble breathing — all of which could indicate a COVID-19 infection.

Related: Will the US ever mimic Asia's culture of 'universal masking'?

Kelly Chang, who teaches at an international school outside of Seoul, returned to South Korea just ahead of the new quarantine measures but was still required to install the app and is practicing social distancing.

“I feel like if I don’t submit my daily diagnosis, I think they might give me a call or track my movements,” said Chang, 40, who is originally from California’s Bay Area.

The app allows authorities to monitor users’ movements and contact them if health updates have not been entered.

But Chang says she’s not bothered by what could be seen as an invasion of privacy.

“I think it's justified given the circumstances,” she said.

Dr. Jerome Kim, director-general of the International Vaccine Institute in Seoul, says the app’s tracking capabilities adds some force to what is mainly a preventative health strategy based on trust.

“Are all people of good faith and will all follow the self-quarantine? Not necessarily.”

Tracking down the non-compliant with an app doesn’t go far enough for other medical professionals. The Korea Medical Association (KMA) has been critical of Seoul’s efforts since the start of the COVID-19 pandemic and calls for stricter border controls.

During the group’s March 30 YouTube newscast, an anchorwoman stated that the country’s medical establishment believes it is “naive” to trust that people will follow the self-quarantine regulation.

She pointed to the widely reported case of a UK citizen, who, upon returning to South Korea last month, was ordered to go into isolation while he awaited the results of a coronavirus test. He was spotted outdoors on multiple occasions without wearing a mask before he was confirmed to have the disease.

Choi Dae-jip, president of the KMA, has criticized current policies for being “too lenient.” The KMA did not respond to The World's interview requests.

South Korea only bars travelers from China’s Hubei province from entering the country. The new coronavirus is believed to have originated in the city of Wuhan, the capital of Hubei.

The International Vaccine Institute’s director-general Jerome Kim says temporarily shutting down airports will not preserve South Korea’s relative success in limiting COVID-19 transmissions — it would only buy time until what some observers say is an inevitable second wave of infections.

“It's easy to be self-congratulatory at this point, but it's really just the first wave and you’ll have to wait for the next one,”

“It's easy to be self-congratulatory at this point, but it's really just the first wave and you’ll have to wait for the next one,” he said, noting that current scientific models predict another round of coronavirus outbreaks could hit South Korea and many other countries later this year.

To prevent the pandemic’s curve from bending back up, Kim says countries need to find better ways to cooperate.

“I think you’ll need to have in place some mechanism for ensuring infected people don’t hop on a plane and inadvertently set off a new outbreak,” he says. “We have to figure that out, and I don’t think we’ve done that yet.