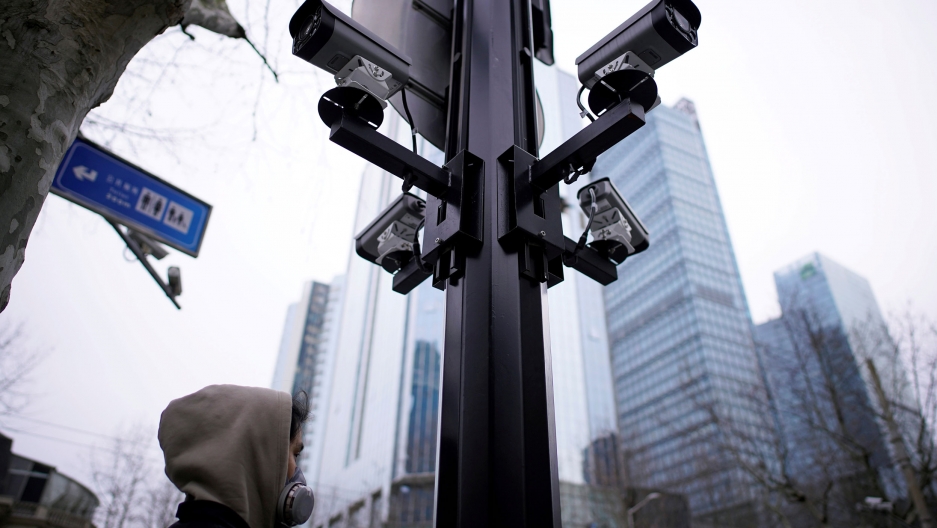 A man wearing a protective face mask walks under surveillance cameras as China is hit by an outbreak of the novel coronavirus, in Shanghai, China, March 4, 2020.

From facial recognition to phone tracking, surveillance measures rolled out across the world as governments try curb the spread of coronavirus could cause lasting damage to the right to privacy, a United Nations expert has warned.

Governments are turning to technology to trace infections and keep tabs on the population as they enforce lockdowns and quarantines to combat the coronavirus crisis.

The danger is that measures brought in to protect citizens in exceptional circumstances, when most people accept they are needed, could outlast the current crisis, said Joseph Cannataci, the UN special rapporteur on the right to privacy.

"Dictatorships and authoritarian societies often start in the face of a threat," he told the Thomson Reuters Foundation in an interview.

"That is why it is important to be vigilant today and not give away all our freedoms."

Related: Combat in the world’s biggest conflict areas not slowing down despite COVID-19

More than 770,000 people have been infected by the novel coronavirus across the world and 37,500 have died, according to a Reuters tally.

With infections reported in more than 200 countries and territories since the first cases were identified in China in December 2019, governments have adopted a variety of measures to stem the contagion.

China has introduced a mandatory traffic-light system that uses smartphone software to determine whether people can move about or meet.

Individuals rated red or yellow on the app are not allowed to travel or visit public places such as restaurants or shopping malls for 14 or seven days respectively.

Israel allowed its counter-terrorism agency to monitor phone location data to alert people who had been near virus carriers, while Singapore launched a contact-tracing smartphone app to help identify those who have been exposed to people infected.

While it was too early assess each measure as the pandemic was still evolving, safeguards could be put in place to ensure the response was necessary and proportionate, Cannataci said.

Surveillance and monitoring measures should be written in law and clearly limited in time, he said late on Monday via Skype from Malta, where he was under home quarantine after returning from a trip overseas.

Governments should also favor voluntary tools such as phone-tracking app requiring users' consent over broader surveillance powers, he said, calling on countries to set up independent bodies to oversee such measures.

"Any form of data can be misapplied in incredibly bad ways," he said. "If you have a leader who wants to abuse the system, the system is there."

Tracking people's phones to monitor where they go and who they meet could also be used to identify members of ethnic or religious minorities, exposing them to the risk of violence and discrimination in some counties, he said.

Health data could help protect those deemed more vulnerable to the virus, but it could also be abused to identify HIV-positive people in countries where the condition is seen as an indicator of homosexuality and homophobia is rife, he added.

"We must be very careful how we use these tools," Cannataci said.

"And citizens should use every means they have to influence both the policies and the laws that are made that affect them."