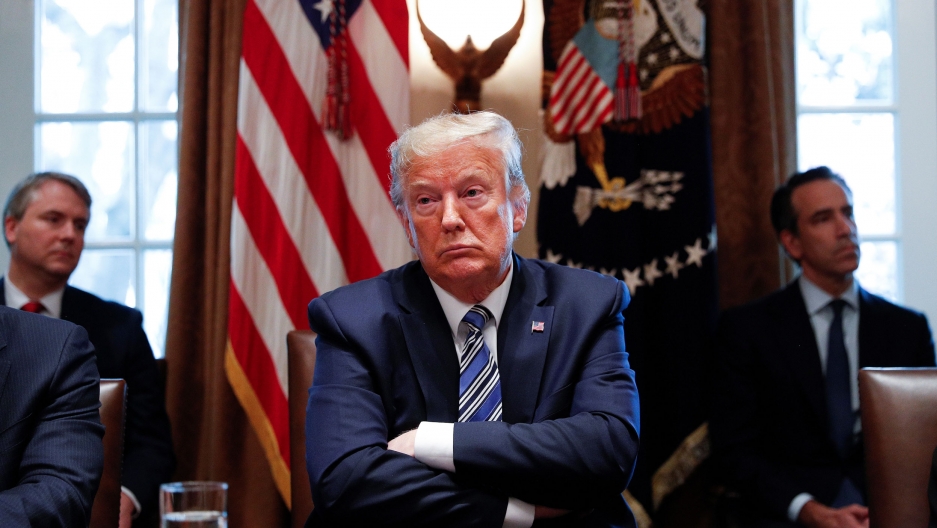 US President Donald Trump delivers remarks to the news media during a meeting with bankers on COVID-19 Coronavirus response, inside the Cabinet Room at the White House in Washington, DC, March 11, 2020.

The fight against the novel coronavirus is also a race for medical supplies: masks, ventilators, lifesaving medical equipment. A lot of that equipment comes from China. In the United States, there's a shortage of supplies and that's partly due to a trade policy of Washington's own making — tariffs imposed on Chinese imports by the Trump White House.

The Trump administration on Friday said it was soliciting public comments on lifting additional tariffs on Chinese imports that could help the United States battle the coronavirus pandemic, showing some flexibility in its trade war against Beijing.

But as it battles to try to keep the US economy from collapsing amid quarantine orders and halted commerce, the Trump administration so far has been resistant to broader removals of tariffs imposed over the past 20 months on some $370 billion worth of Chinese imports annually, despite calls from the industry that this would be an instant tax cut worth tens of billions of dollars.

US President Donald Trump considers his trade pressure on China among the biggest achievements of his presidency and a top argument for reelection in November.

Chad Bown is senior fellow at the Peterson Institute for International Economics. He spoke with The World's Marco Werman about the impacts of the Trump administration's trade policies on supplies of medical equipment in the US.

Marco Werman: President Trump began his trade war with China in early 2018, and these tariffs hit many medical products and pretty hard. So we can't redo the past two years, Chad. But in theory, would we have less of a shortage of medical equipment if we never had these tariffs in the first place?

Chad Bown: I think the answer to that is clearly yes. There's a number of products that the Trump administration — when they were deciding what to impose tariffs on and what not to impose tariffs on over the last two years — they went out to the public and asked, you know, hey, what do you think of us imposing tariffs on these products? And the American medical community, in a lot of instances, came and said — try to avoid these. And in many instances, the Trump administration didn't. And so you end up with 25% tariffs on things like oxygen concentrators and thermometers and disposable medical headgear. You have 10% tariffs on a lot of protective clothing, or 15% tariffs even, and I think [that] made it difficult for buyers, American hospitals, to prepare for a pandemic like we're seeing today.

We should point out that the Trump administration did announce — quietly announced — earlier this month that some of these tariffs on medical supplies would be temporarily reduced to deal with the coronavirus when it charges onto American shores. Now it is here. So was that too little, too late?

Well, I think it was definitely a step in the right direction. We want to get rid of these tariffs and make it easier for American hospitals to be able to get access to whatever supplies they need from wherever they might need them. But I also think that it is a bit of a mea culpa by the administration, sort of recognizing that they have made it more difficult for the American medical community to be prepared for a pandemic that might arise. And so I think it's a step in the right direction. They, for what it's worth, put out another call at the end of the last week saying, "Hey, if there are other products that we haven't yet taken off of our tariff list, that you do actually need to buy from China, let us know and we'll consider removing them." But again, time is ticking by here. And that could take weeks. And hospitals and doctors and nurses — they need this stuff right now. And it seems to be a lot to ask them to go through this bureaucratic process, to ask for some tariffs to be removed when they really should be focusing their time and energy and efforts on other things.

Trump and critics of past trade policies say the US had become too dependent on China, and the crisis we're in now is an example of that dependency. Do you think that's a fair criticism?

Well, I think to deal with an epidemic and a pandemic like what we're facing right now, and the shortages of the supplies, you do need to have a diverse source of supply of these things. You know, you'd want to be producing some of these in the United States — which we are. You want to have supplies coming in from other countries around the world as well, not be entirely reliant on China. I think in this case, the United States was buying a fair amount of this equipment from China, but not only from China. We import a lot of this stuff from Mexico as well. So I don't necessarily think that we were too reliant on China. But I do think you do need to have a diverse source of supplies for these sorts of critical equipment.

Well, you kind of put your finger on it, Chad. Time is of the essence. So what does the US need to do right now? Play nice with China, make more medical supplies here or turn to other countries like Mexico? I mean, they rank second in medical equipment, bought by the US.

Yeah, I think we need to do all of the above. I think no one knows how this is going to play out over the long-term. And I think that we need to be prepared for the worst-case scenario. The Trump administration, it needs to be thinking of creative ways to incentivize American production. We also though, I think, do need to make nice with China and decide that, well, some of the priorities that we were worried about six months ago or a year ago in fighting the trade war — maybe we need to put some of those on the backburner. And this is really actually much, much more important. This is about life and death. We need to get these supplies from wherever we can get them — as quickly as we can get them.

Given the trade war and the antagonism there — not to mention the nasty rhetoric coming out of the White House right now about the coronavirus — I mean, do you think playing nice with China is even an option?

I don't know. You know, I always hope that things can change. I'm an optimist by nature. It has not been the approach of the administration so far. You know, when everything was going fine, the economy was going fine and everybody was healthy, maybe it didn't need to be considered all that much. But now I think times really, really are quite different. And a new approach is needed.

This interview has been edited and condensed for clarity. Reuters contributed reporting. Follow The World's COVID-19 coverage here.