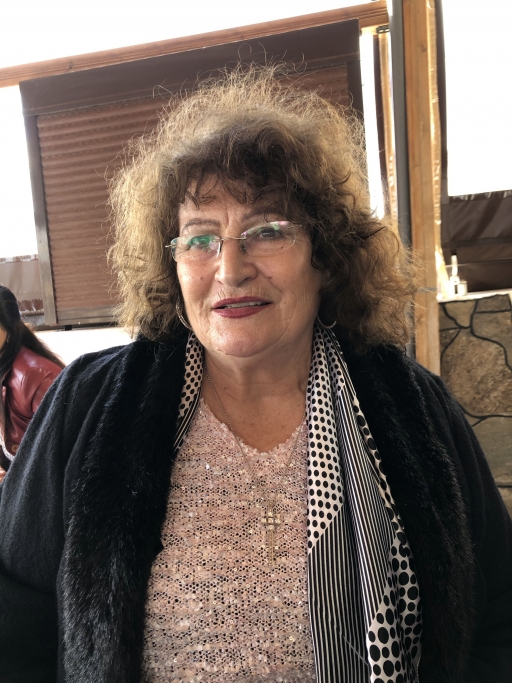 Fotini Gougoulidou has lived in Kastanies, Greece, her whole life. She says the village has always been peaceful — until now.

The northern Greek village of Kastanies sits right on the land border with neighboring Turkey. With a population of about 800, it’s the kind of place where everybody knows everyone else. Most of the residents are farmers and elderly pensioners.

Fotini Gougoulidou has lived in Kastanies her entire life. She can see the border crossing with Turkey from the yard of her house. For years, she and her husband ran a farm together. Gougoulidou, a retiree, said life in Kastanies has always been peaceful — until now.

In late February, Turkish President Recep Tayyip Erdoğan announced he had opened the country’s border for refugees and migrants to enter Europe, saying Turkey could no longer handle the influx of people fleeing the war in neighboring Syria.

On the Turkish side, hundreds of migrants are now gathered at the Greek border fence trying to cross into the European Union. And on the Greek side, close to Gougoulidou’s house, the Greek army and security forces are stationed along the border to stop anyone from entering. Clashes have raged between the two sides day and night.

The sky over Gougoulidou’s once peaceful village is now regularly streaked with tear gas, smoke bombs, rocks and water cannons flying back and forth over the international border fence.

“All these years, I don’t remember there being any episodes like this.”

“All these years, I don’t remember there being any episodes like this,” Gougoulidou said last weekend as she watered her plants in front of her house. The past few weeks, she added, have been “chaos.”

Relations between Greece and Turkey have always been complicated. The modern Greek republic spent centuries under Ottoman Empire rule — a history that is deeply ingrained in the Greek psyche. Greece's resistance to the Turkish occupiers is a subject taught in public grade schools. It's a theme that is foundational to Greece's national myth and gives many Greek citizens a sense of pride in their country.

But in the border village of Kastanies, interactions with the Turkish neighbors are a fact of daily life. Relations are friendly. Then the recent political standoff between the two countries changed everything. Some locals have come to view Erdoğan's actions as a provocation rooted in centuries-old tensions — with some calling the refugees and migrants at the border an "invasion." Groups of Greeks near Kastanies and along Greece's land and sea border with Turkey are taking matters into their own hands, forming vigilante groups to push refugees and migrants back over the border into Turkey.

Related: Refugees caught in the middle of Greek-Turkish political standoff

Stelios Panagos runs a cafe in Kastanies about two blocks from the border crossing. On a typical day, the cafe is filled with local Greeks as well as Turks who come to Kastanies for the day, either for work or just to spend time.

“The village was full,” Panagos said. “People would come by foot. Two hundred, 300 people a day. We would go there — as if we were the same place. As if there were no borders.”

He said he misses his Turkish neighbors and friends — but he is angry at their government, especially Erdoğan.

Panagos’ concerns echo those of many Greeks: He believes Turkey is orchestrating this whole situation for political gain. He also believes Erdoğan is trying to blackmail the European Union to get more support for its armed campaign in Syria, along with more funding for the nearly 4 million Syrian migrants and refugees the country has hosted for years. 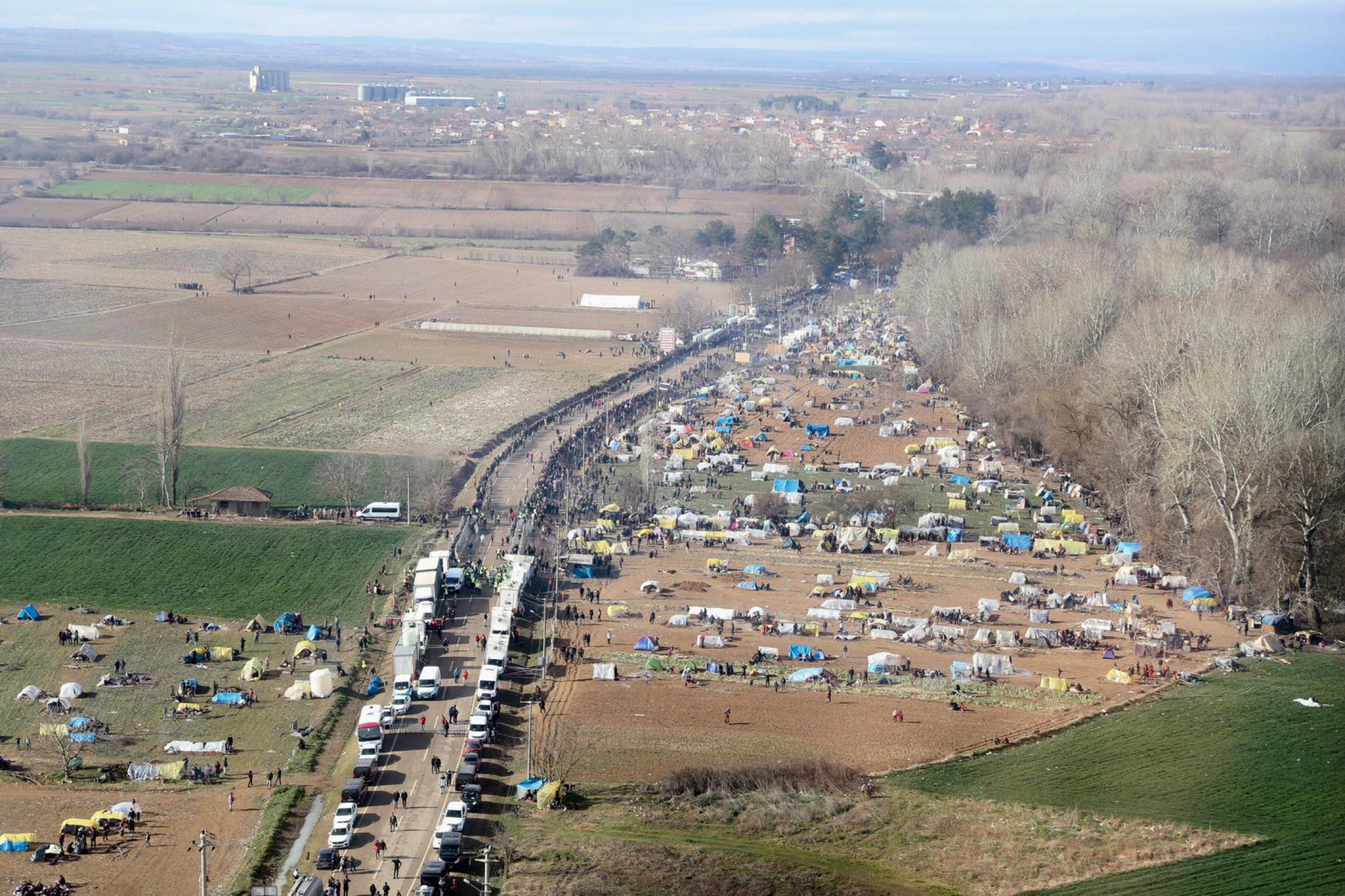 An aerial photo taken from the helicopter of Turkish Interior Minister Suleyman Soylu shows migrants waiting in line to receive food at Turkey's Pazarkule border crossing with Greece's Kastanies, near Edirne in Turkey, on March 5, 2020.

Greeks in Kastanies — and throughout the country — said they feel abandoned by the EU. Brussels has given Greece about $780 million in aid to handle the recent border crisis and have deployed European border guards to help Greece protect its border.

But many Greeks say the EU is essentially bending to Erdoğan’s will by not doing enough to help Greece. The past few weeks have highlighted problems left unresolved following Europe’s 2015 refugee crisis in which hundreds of thousands of people entered the EU via Greece. Many of them traversed the Balkans and made it to northern European countries such as Germany and Sweden.

But gradually, countries along the so-called “Balkan route” closed their borders. Newer arrivals are often stranded in Greece indefinitely. The situation has strained Greece’s border zones, particularly several Greek islands located just a few miles off the Turkish coast that host more than 40,000 refugees, including in overcrowded camps. In 2016, the EU made a deal with Turkey to prevent asylum-seekers from crossing into the EU in exchange for about $6.8 billion in aid for the refugees it was hosting.

“Until now, I thought the Greek border was an EU border. But it turns out that’s the case only on paper. They’re failing us. We’re waiting for help.”

“They left us helpless,” she said of the EU. “Until now, I thought the Greek border was an EU border. But it turns out that’s the case only on paper. They’re failing us. We’re waiting for help.”

Some locals are taking matters into their own hands. A group of men from a nearby village have formed a vigilante group — and they’re armed. They scope the area around the border and hunt down any migrants who make it through, one of the group members told The World. He agreed to an interview under the condition of anonymity because the group is not authorized to take up arms.

“We’re not racists up here,” he said. “We’ve helped refugees in the past. But these are not refugees. But what’s happening now is an invasion.”

Meanwhile, other locals like Panagos say the situation is under control for now. He and a few other men who live in the village are members of the Greek National Guard. They are trained civilians with weapons issued by the government — and they are ready to mobilize if they’re called on to help protect the border, Panagos said.

“We’ll wait for a command from the police and the army, and then we will mobilize. We won’t go play tough. This is a serious situation, and we need to be calm,” he said.

“If one person makes a mistake, they’ll make all of us — the whole country — look bad,” he added. “Staying calm is key. It’s necessary. We’re not going to take up arms and go on our own. If they ask us to go, we will.”