As a diplomatic standoff between Greece and Turkey escalated this week, rumors flew among refugees and migrants packed into the tents of Vial, a refugee camp on the Greek island of Chios. After being stuck on the island for months, they feared the political drama would bring even more crowding and potentially hurt their asylum cases.

Last week, Turkish President Recep Tayyip Erdoğan announced he had opened the country’s border for refugees and migrants to enter Europe, saying Turkey could no longer handle the influx of people fleeing the war in neighboring Syria. Within days, tens of thousands of people had amassed at Turkey’s land border with northern Greece. In response, Greece deployed military forces to the border, increased security on the Aegean Sea, and announced a one-month suspension of new asylum applications.

Even before Turkey’s announcement, Chios, with its view of the nearby Turkish coastline, was an epicenter of tension over EU policies that made several Greek islands de facto holding sites for some 42,000 refugees and migrants. Erdoğan’s move only exacerbated those tensions. And refugees are caught in the middle.

“It will mean more suffering, more problems, more bad things,” said Majed, a 27-year-old refugee from Syria. Majed, who asked The World not to use his last name out of concern for his asylum case, has lived in Vial for three months along with his older brother. “For sure there will be more problems. It will be too much.”

Vial camp holds more than 6,000 people in a space built for 1,000. About 1,000 people live in housing containers, and the remaining 5,000 live in tents or self-made structures with plastic tarp walls.

These structures have no electricity or heat, so people make fires in the makeshift alleyways to keep warm. The camp is often clouded with the acrid smell of burning plastic.

Anissa, a 22-year-old asylum-seeker from Somalia who has been staying at Vial for five months, said she lost her home and all her belongings in a Feb. 28 fire that burned at least 20 tents, leaving only charred frames. Now she stays with friends, cramped in their tent.

“It’s a disaster. It’s terrible,” said Anissa, who asked The World to use only her first name to protect her safety. “Everything you want, you need to wait in line. You get an appointment next week even if it’s urgent.”

Residents of the camp line up every morning for two to three hours to receive breakfast and two to three hours in the afternoon for lunch. The meals come pre-made in plastic containers sealed with plastic wrap. Often, residents say, the food is rotten. To see a doctor, camp residents must frequently line up beginning at night for any chance to be seen the next morning. 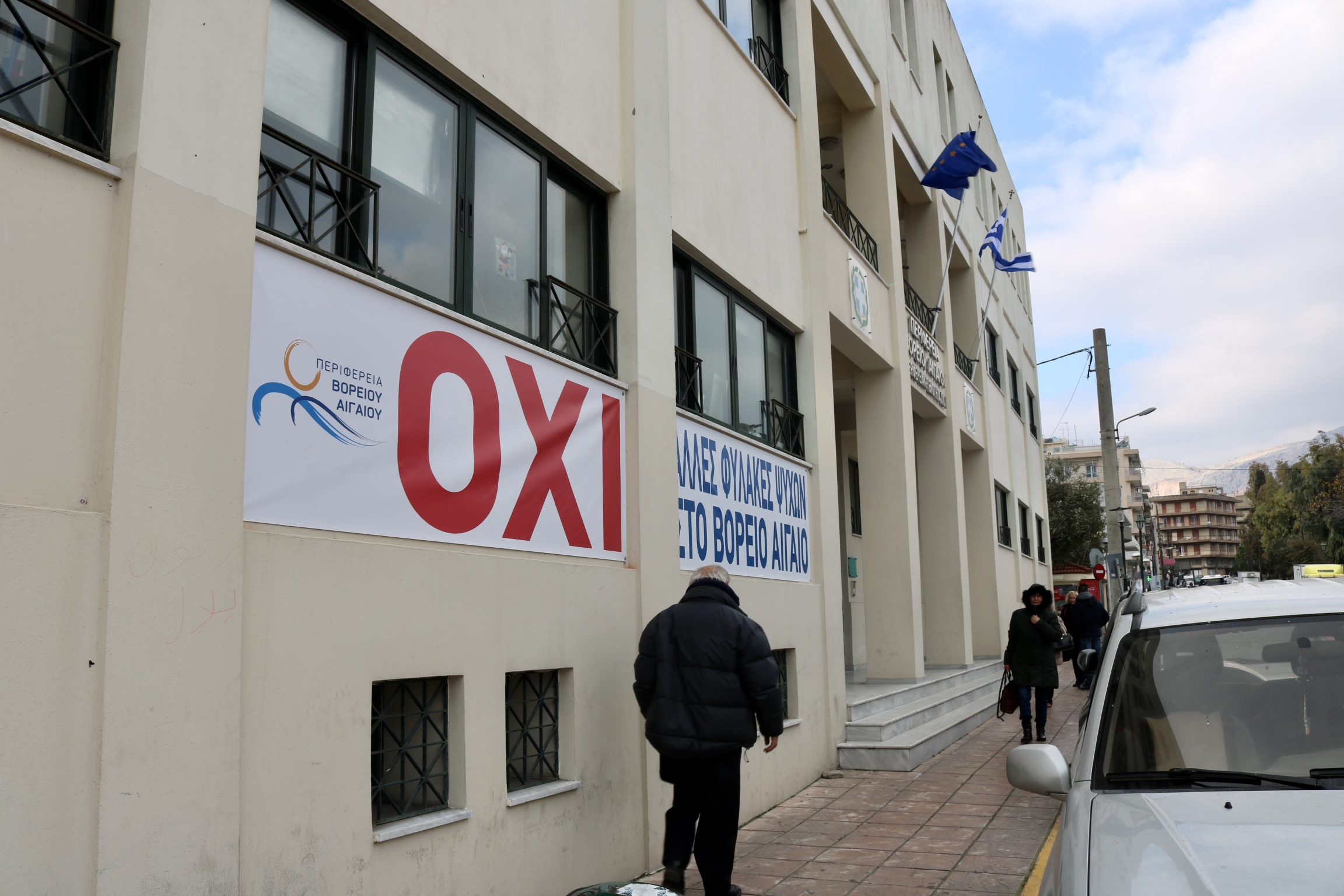 Outside the office of Chios’ regional vice governor, signs in Greek read: “No more prisons in the Northern Aegean.”

Due to a combination of EU and Greek policies, refugees and asylum-seekers are not permitted to leave the islands while their asylum cases are being processed, a procedure that drags on for months.

Majed has waited to register for asylum for three months. Without an asylum-seeker card, he cannot work. He must rely on cash assistance of 90 euro (about $100) per month from the United Nations Refugee Agency, UNHCR. He volunteers his time translating for lawyers and NGO workers. But he cannot leave the island until his asylum claim is approved. He’s been told nothing can be done to speed up the process.

Turkey's Erdoğan has threatened to send a surge of refugees and migrants into Europe several times over the past few years. But his actions last week — which included bussing people to the land border with Greece — were his most brazen yet. They posed a serious threat to 2016 deal between the EU and Turkey, which stipulates that Turkey would prevent asylum-seekers from crossing into the EU in exchange for 6 billion euro (about $6.8 billion) in aid for refugees in Turkey.

“What we are seeing now at Turkey’s land and sea borders with the EU is that people seeking asylum are once again being used as bargaining chips in a deadly political game, a predictable consequence of the EU-Turkey deal,” Amnesty International’s deputy research director Massimo Moratti said in a statement.

Related: EU will not give in to Erdoğan's 'blackmail,' Greek MEP says

Pantelis Bougdanos, Chios’ regional vice governor, told The World he is worried about arrivals over the sea border, as Chios is already over capacity.

“It will be very difficult for us to manage this number of arrivals,” he said. “This development is not good for us.”

Greece’s government reacted sharply to Erdoğan's move, stating it would increase border security and suspend new asylum applications for one month. Meanwhile, Turkish authorities released a video of a Greek coast guard ship on the Aegean Sea apparently pushing a boat full of people back to Turkish waters. On March 2, a child died when a boat capsized off the island of Lesbos.

The Greek government's suspension of asylum applications is the latest in a series of crackdowns on migration. So far this year, it has prevented asylum-seekers from accessing the national healthcare system, made the asylum system more stringent, and invited contractors to bid on building a floating sea wall to prevent people from landing on the Greek islands.

But thus far the suspension has been supported by the EU. The European Commission President, Ursula von der Leyen, said: “This border is not only a Greek border. It is also a European border.”

“I thank Greece for being our European aspida in these times,” she added, using the Greek word for shield. The EU has pledged an extra 700 million euro (about $790 million) in aid to Greece in response to Turkey's provocations.

“I do believe that this was a move from the government that aims towards two different directions,” said Antonis Deriziotis, a professor of Greek and Turkish relations at the University of Athens. “One direction is towards the EU to apply pressure, and the other one is to appease certain parts of the Greek society, the most conservative ones.” 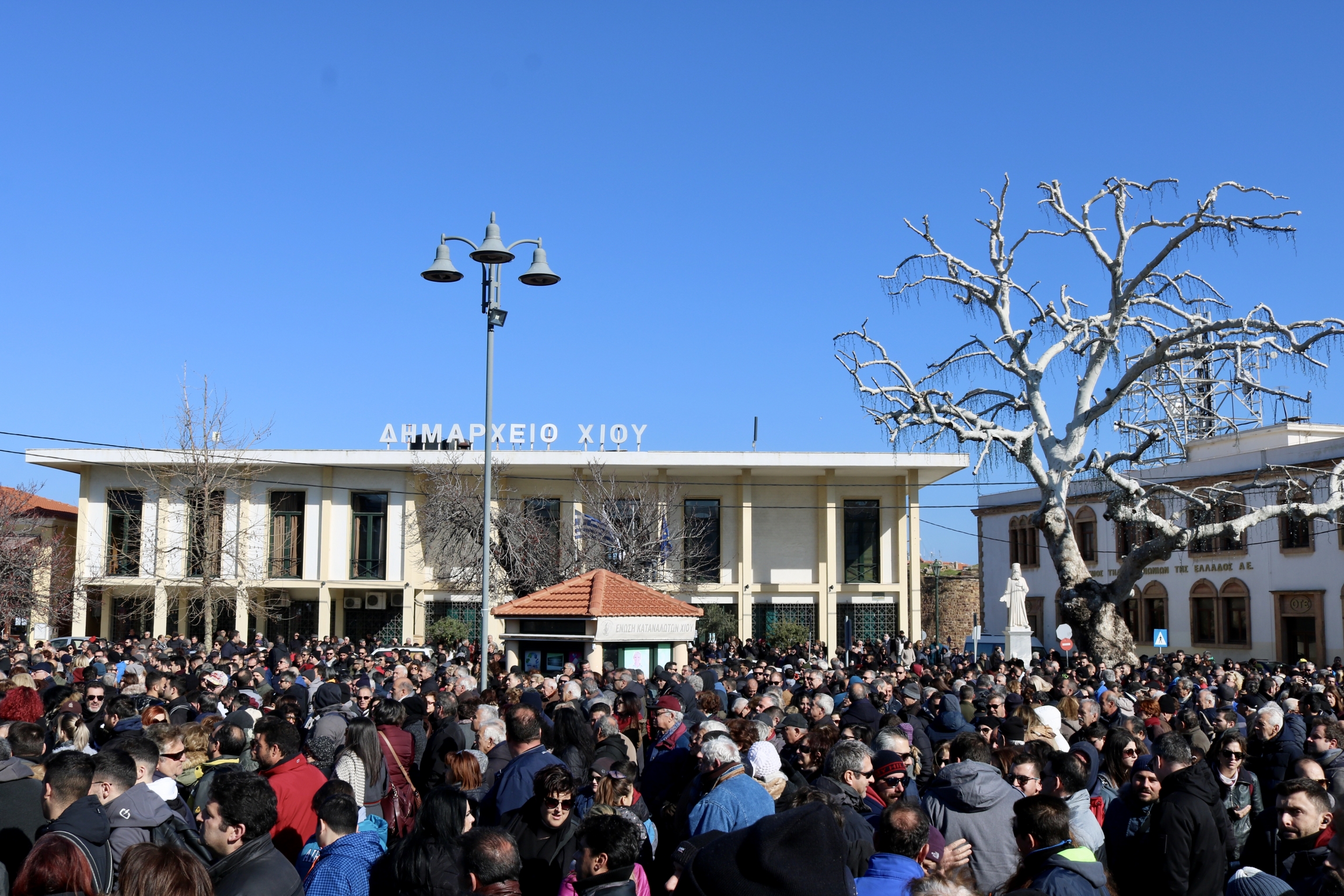 Residents of Chios gather in the town square on on Jan. 22, 2020, in protest to the planned construction of closed migrant detention camps on the island.

Resentment over the deadlock on the islands has been growing among the local Greek population for months. Last week Chios was rocked with three consecutive days of strikes and protests to the government’s plan to build closed migrant detention camps on the island. Riot police were sent to the island, marched off a ferry, and clashed violently with protestors for days.

Manolis Stathis, 59, an economics professor and Chios resident, attended all the protests and called them a “reaction to the government's plans to turn the eastern Aegean islands into prisons.”

“This is done in solidarity with the refugees, people who, in search of a better fate, find themselves passing through the island of Chios,” he said.

But for other residents, the frustration over government decisions and European politics has veered into xenophobia.

“We want them to go back to where they came from. Europe will take the good ones and leave the others here.”

“We want them to go back to where they came from,” said Maria Moschouri, 60, a tailor on the island. “Europe will take the good ones and leave the others here.”

In the past week, some locals took a Greek flag and went to Vial to blockade the road, delaying deliveries of food and water to the camp and leaving one group of newly-arrived refugees stranded outside the port authority. On March 2, a warehouse used by the group Chios Volunteers to store clothes and supplies for people in the camp burned down in what the Chios Fire Department has identified as a case of arson. 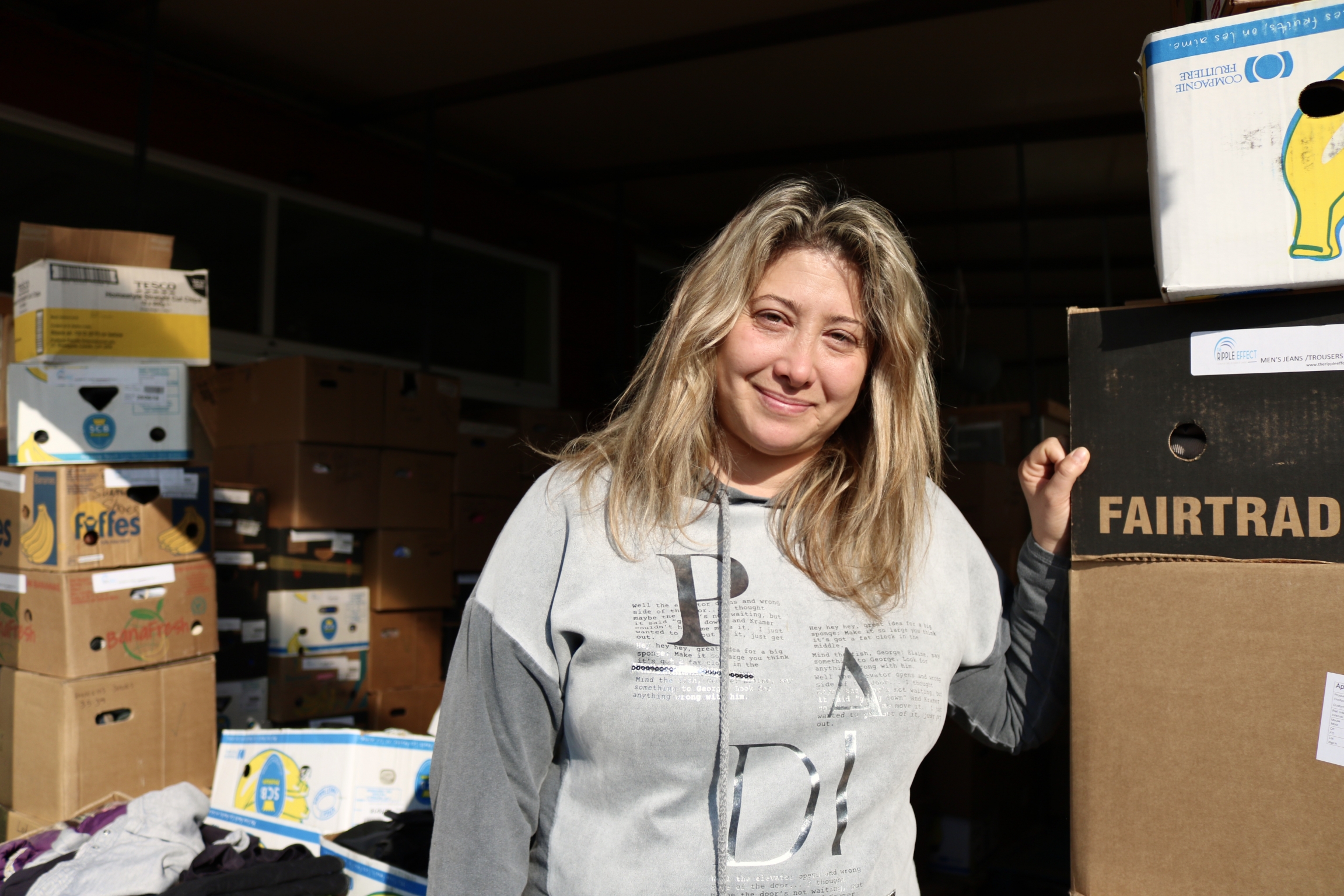 Toula Kitromilidi, a lifelong Chios resident and founder of the Chios Eastern Shore Response Team outside the NGO's warehouse on Jan. 23, 2020.

“They [the locals] feel abandoned by the government, and they attack the wrong people."

“They [the locals] feel abandoned by the government, and they attack the wrong people,” said Toula Kitromilidi, a lifelong Chios resident and founder of the Chios Eastern Shore Response Team. Since 2015, the group has met boats of arrivals with a fresh change of clothes and other aid.

Regardless of international agreements, border patrols, or deterrence factors, people will continue to try to reach the Greek islands. And for the next month, these people will not be able to apply for asylum. The government says they will transfer new arrivals to the Greek mainland and hold them in new closed detention camps until they can be deported, but the camps have not been constructed yet, and new arrivals are held on the islands.

Those already Vial continue to wait. Aziza Husseini, 30, has been waiting in Vial for three months. Originally from Afghanistan, she lives with her two young daughters in a small cabin with walls made of tarp. She is afraid and exhausted.

Her arm circled around her older daughter, Husseini shakes her head. “We have to leave here.”