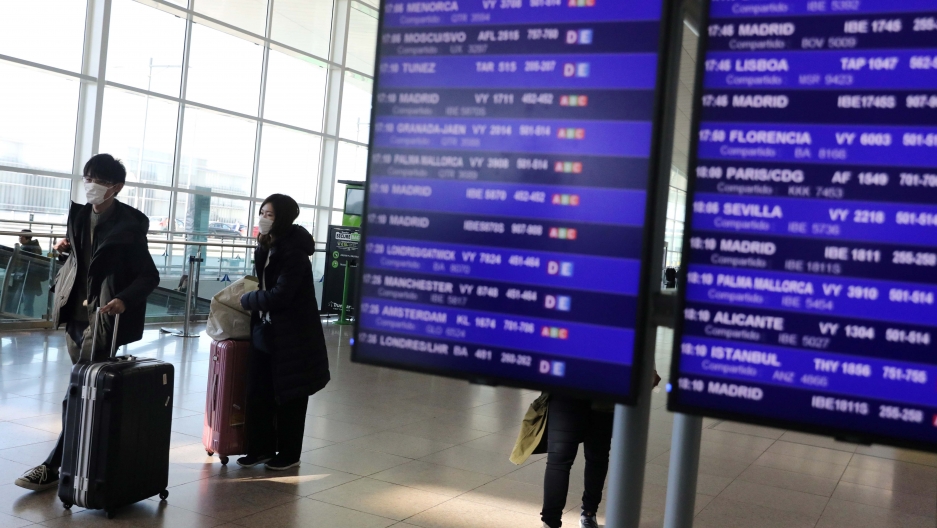 Tourists walk next to the display flight information at Josep Tarradellas Barcelona-El Prat Airport, where cases of novel coronavirus has been confirmed in Barcelona, Spain, February 26, 2020.

The coronavirus continues to spread, and US officials want Americans to be prepared and take precautions. One big question we keep hearing from listeners: Is it okay for me to travel?

Several governments around the world have closed their borders or halted air travel to regions with coronavirus outbreaks.

The tension between travel, disease and politics is something Amy Pope knows well. She served as deputy Homeland Security adviser to the White House during the 2014 Ebola outbreak in West Africa.

Pope discussed the lessons she learned from managing Ebola with The World's host Marco Werman.

Related: What we know and don't know about COVID-19

Marco Werman: We are getting lots of questions from listeners and specifically around whether they should be changing travel plans to Asia and Europe in the coming weeks. What is the proper amount of caution to be taking while traveling now?

Amy Pope: I think the best course of action is to really try to separate the rhetoric from what we know about the outbreak, and the [World Health Organization] has on its website an ongoing situation report. The Centers for Disease Control and Prevention in the United States also has ongoing traveling alerts about the risks associated with going to various parts of the world. And within my own workplace, we are advising our employees to check those websites regularly, but not to overreact. So, for example, the current guidance is that if you've been to Italy, but not been to one of the 10 towns that have been effectively quarantined by the Italian government, then there's no reason to self-isolate. There's no reason to stay home unless you start to develop symptoms.

But ultimately, a lot of this goes back to the same precautions that we need to use when preventing the flu. Simple things like hand-washing disposing of your used tissues, right? Not going to work if you're ill. All of that is critically important and is highlighted more so when we're in a situation like the one we're in now.

As a former security adviser to the White House, what do you think about politically between countries when we talk about border control. How do countries talk to each other around this right now, when the potential for frayed nerves and insults is so high?

This is where the United States can really be a leader. This was something President [Barack] Obama considered at the time of Ebola. He knew that if the United States took the extraordinary measure of shutting down all travel between West Africa and the United States, that inevitably other countries would follow, and West Africa would become increasingly isolated and thereby increasingly unable to manage the outbreak of the disease. So you need courage and leadership by countries that have the evidence, that have the science, that are getting the expertise — rather than sort of everyone racing to the politically expedient decision, which is just to close down borders and shut down travel.

Related: Controlling the spread of the coronavirus is key to stopping a 'true pandemic,' NIH head says

How different do you see the situation in other countries? Because we're seeing places that are banning travel from Iran, for example, right now. I just saw an Italian flight that landed in Mauritius. Passengers were on lockdown. So there's a lot of this going on in very, kind of, sporadic places around the world.

So there are a couple of different variables here. One of the questions is what are the health systems that are in place in the countries that we're talking about? Again, post-Ebola, we learned that there was so much work to be done between improving the health systems of various countries around the world — basic things, from monitoring cases, providing rapid response, doing the contact tracing — that kind of thing that was just missing. And so if we're talking about a country that does not yet have some of those basic metrics in place, then I do think that there are more compelling reasons for them to be careful about admitting people who they have reason to believe are infected. When we're talking about countries like the United States, like Europe, Japan, other places which have very, very well-developed health care systems, very well developed infection control procedures in place and very highly functioning governments, then it's a different matter. And those countries, again, leading by example, can actually make the situation far worse.

Ultimately, we don't want to drive people who are unwell underground. We don't want to end up in a situation where people are not reporting that they might be infected. That is far more damaging to communities than it is to be transparent, to identify who's ill, to treat them appropriately, to not take overly restrictive or punitive measures against them.

In other words, you have to look at the health systems of countries before judging what might seem like harsh moves to us?

I mean, I'm uncomfortable in general with highly restrictive policies because in our experience they just don't work. But ultimately, we need to be looking at, "How do we shore up the most fragile states, the states that have the least resilience in responding to these kinds of infectious disease outbreaks?" The better response is not to condone their travel restrictions. The better response is to look for ways to improve their own resilience to the outbreak.