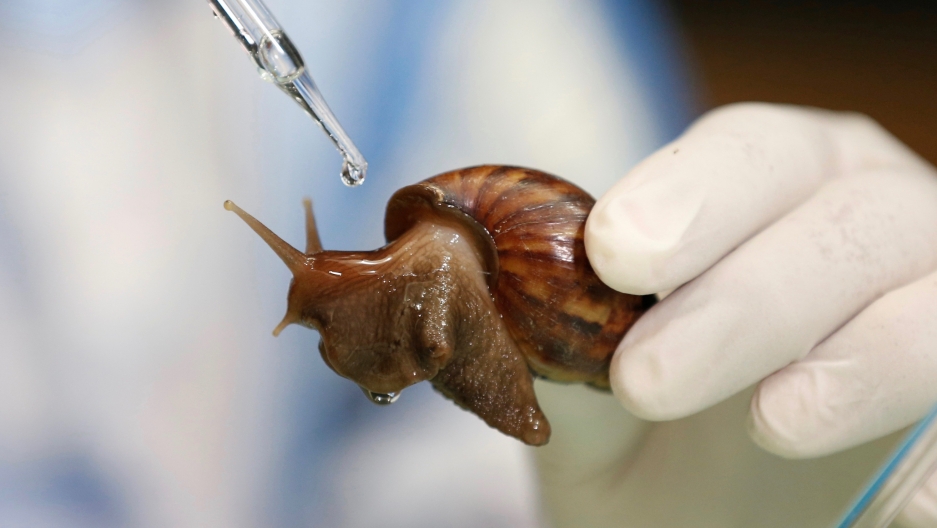 A man waters a snail in the process of producing cosmetics at a snail farm at Nakhon Nayok Province, Thailand, May 11, 2018.

It begins with a caress. The scientist lightly drags a plastic wand over the snail’s mantle until the creature glistens. Then he holds it aloft, light shimmering across its skin, its antennae wiggling.

“You see that? The slipperiness?” Somsak Panha said. He’s a biologist who is known as Thailand’s top snail guru.

“That’s mucus. Just a touch. Shiny, isn’t it? And this right here is the stuff people can actually use.”

“That’s mucus,” he said. A little stimulation on a snail’s skin makes it ooze. “Just a touch. Shiny, isn’t it? And this right here is the stuff people can actually use.”

By “use,” he means smearing that mucus all over your face. Dabbing it around your eyes in hopes your crow’s feet will vanish. Rubbing it into your cheeks so that they’ll appear youthful and taut. The therapeutic effects of snail mucus haven’t been studied intensively, but proponents say the slime is incredibly hydrating.

People swear by it. Which is remarkable because not so long ago — in places such as Thailand, where snail serum treatments are a full-on fad — snails have long been regarded as pests. Loathsome things that devour crops.

In recent years, however, boutique types of dried snail mucus have, kilo for kilo, fetched prices on par with gold. Some estimates peg the value of the global snail slime industry at more than $300 million.

This craze is often identified with South Korea, a hot spring of pan-Asian cultural trends. Brands from Seoul began popularizing snail-derived cosmetics about five years ago. That South Korea was dominating the industry initially bothered Somsak, a researcher at Chulalongkorn, one of Thailand’s most prestigious universities. 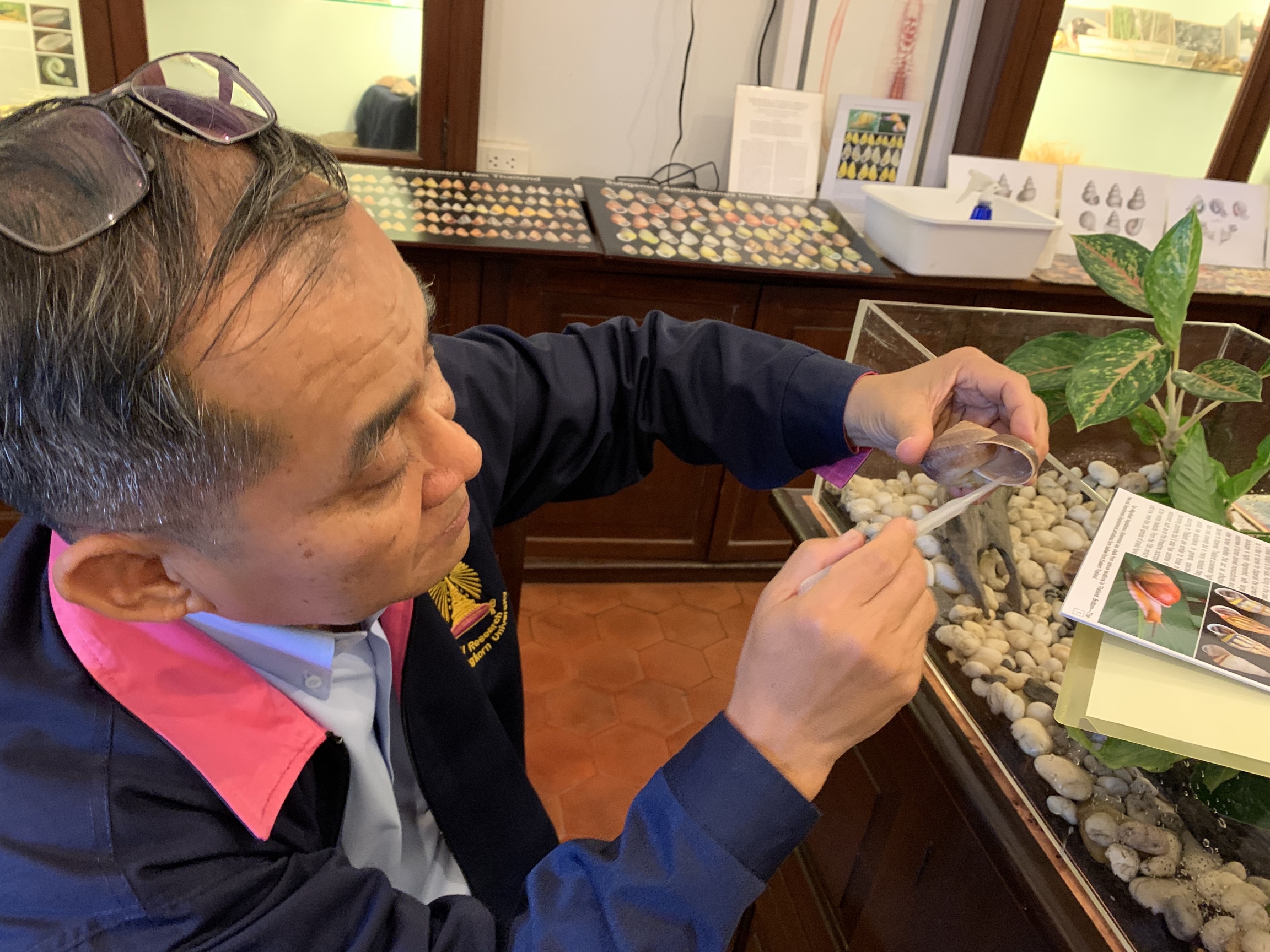 Somsak Panha is a biologist who is known as Thailand’s top snail guru.

Thailand is heaven for snails. They thrive in the country’s balmy, monsoon-soaked climate. And it’s a far more snail-friendly climate, he said, than the Korean peninsula, which can get quite frigid. There are 600-plus species of snail in Thailand, and according to Somsak, he and his team have helped discover more than 100 of them.

Related: This app is disrupting motorbike taxis in Bangkok. Some are disrupting right back.

He picks up the snail from before — as big as a tennis ball with a caramel-colored shell — and makes a declaration: This species can produce slime finer than any you’ll find in the Koreas. (The breed is known in Thai as a Hoi Nuan and in taxonomy guides as Hemiplecta distincta.)

“Its mucus is top-notch. It won’t make you immortal, but it sure can make you look younger.”

“Its mucus is top-notch,” he said. “It won’t make you immortal, but it sure can make you look younger.”

This species can secrete about five cubic centimeters of top-notch mucus per day, Somsak said. (At that rate, it would take roughly three months for one snail to fill a pint glass.) That goop, he said, is precious — and he has aggressively promoted this species as a superior source of slime.

Somsak knows his snails. He has been smitten with gastropods for more than three decades. He can recall, wistfully, the day he fell in love with them. It happened in the forest when, as a much younger man, he lifted a snail from the jungle floor and was mesmerized by its breathing.

“Have you ever seen a snail’s nose hole? It’s magnificent,” he said, lifting that same Hemiplecta Distincta from its terrarium. He prods it so that its skin parts, creating a hole that pulsates rhythmically. “That’s exactly what I saw more than 30 years ago. Breathing — in, out, in, out — oh! I got so excited.”

Somsak loves snails. How they’re sensitive, able to detect your hand’s warmth through their shells. How they are “genderless,” he said, negotiating which one gets pregnant every time two snails mate.

Until recently, obsessing over snails was a lonely pursuit. Then the slime beauty fad hit. Somsak wasted little time in starting his own side business: a snail slime retailer that, he said, collects roughly 1 ton of mucus per year — and bottles it for consumers. (A 15-milliliter glass jar costs about $45. Eyedropper included.)

“The market is huge now,” he said. “Everyone wants it, men and women alike. I actually think men are starting to buy more of it than women.”

In Thailand’s upcountry, where agriculture is a powerful economic force, raising snails has become a popular side hustle. There’s no shortage of YouTube how-to videos in which Thais share tips on raising snails in their backyards and collecting slime for the cosmetics industry.

“People have discovered that if you raise a lot of snails — and you do it right — you can make much more than farming rice or working at 7-Eleven. But you’ll need to take it seriously to turn a profit.”

“People have discovered that if you raise a lot of snails — and you do it right — you can make much more than farming rice or working at 7-Eleven,” Somsak said. “But you’ll need to take it seriously to turn a profit.”

And, he adds, you need to collect the mucus with care. When stimulating the snail’s flesh, add a bit of water, he said. Not only does it provoke more secretion, but the moisture also comforts the snail, which has more nerve endings than most people think.

But if snails are such sensitive creatures, does the prodding annoy them? Somsak said he’s heard people online likening snail mucus collection to torture.

“But it’s not torture at all. You can do it gently. And they’re going to ooze out that slime anyway, simply by moving from place to place,” he said. “It’s surely not as bad as roasting them alive. That’s way more harsh.”

Indeed, the Hemiplecta distincta isn’t some rare species he plucked from a remote corner of Thailand. It’s literally a garden variety snail — and upcountry Thais have been eating them for ages, often after grilling them in their shells, plucking out the flesh and dipping them in a tangy, chili-flecked sauce.