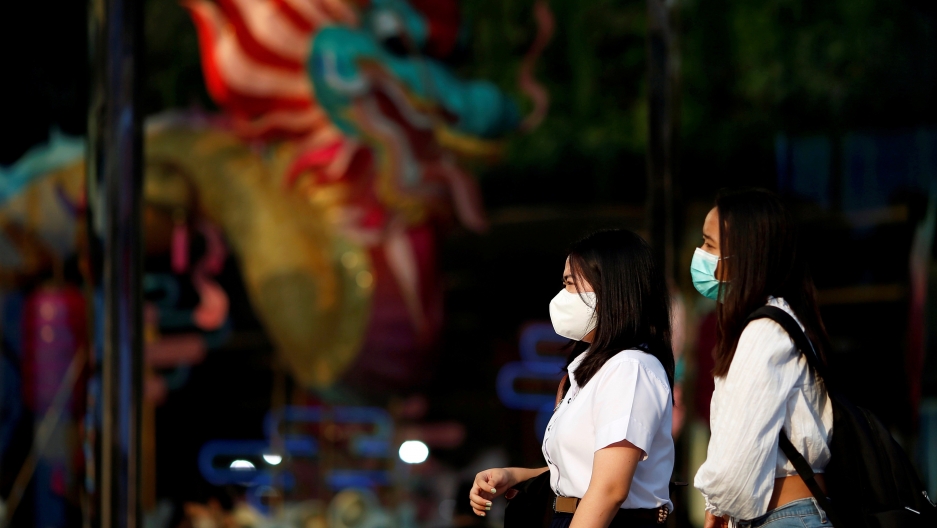 Women wear masks as a preventive measure against the coronavirus outbreak, in Bangkok, Feb. 7, 2020.

Outside China, few countries have seen more coronavirus cases than Thailand — and that’s hardly surprising. Alongside Japan, Thailand is one of the most touristed countries for Chinese nationals, including travelers from Wuhan, the epicenter of the mysterious virus.

The new coronavirus has also proven it can leap from a traveler to someone in the tourism industry. It appears that two people infected in Thailand are taxi drivers and another is a private chauffeur.

Related: What we know about the new, novel coronavirus: A timeline

That has stirred panic among the many Thais who, by virtue of their jobs, come into constant contact with tourists. But those afraid of catching the virus often feel they have no choice but to slog through and put their health at risk.

“I have to come here every day … but I’m scared. Scared to die.”

“I have to come here everyday… but I’m scared. Scared to die,” said a young woman selling flowers near the Temple of the Emerald Buddha. It’s one of Bangkok’s busiest attractions and a favorite among Chinese tour groups.

She was uneasy giving her name, saying only that she hopes her face mask and frequent hand-washing will keep her safe. “It worries me,” she said. “My kids aren’t even grown up yet.”

The temple complex and adjacent royal palace, all glittering golden spires and bejeweled facades, draws in a staggering 8 million visitors per year. Practically mandatory for tour groups, it’s a must-see attraction for Thailand’s annual 40 million tourists — roughly one-quarter of whom are Chinese.

Inside the temple, crowds pack in shoulder to shoulder through tight passageways, moving slowly along tiled footpaths that were not designed for the crush of 21st-century tourism.

This tourism boom from China has been good to Gai Dti, a freelance tour guide from Thailand who is ethnically Chinese. Each morning, he waits outside the temple gates and scans for “anyone who might be Chinese,” he said. When he approaches them, he greets them in Chinese with, “Hello! Are you in need of a translator and guide?”

He now asks that question through a surgical mask. Each morning, Gai Dti does something public officials have urged everyone not to do: wading into a large gathering. To avoid the virus, the World Health Organization urges people to stay three feet away from strangers. But for Gai Dti and other tour guides here, this is impossible.

“If you follow the news, you know why we’re all scared. It’s good that China has shut down flights out of Wuhan. I think they’ll get it under control. But I know this job is still not safe.”

“If you follow the news, you know why we’re all scared,” he said. “It’s good that China has shut down flights out of Wuhan. I think they’ll get it under control. But I know this job is still not safe.”

Thailand — reliant on Chinese trade and tourism, reluctant to injure Beijing’s feelings — has yet to suspend flights from China, where the virus continues to spread. Only flights from Wuhan and other high-risk cities are on pause. This policy mirrors that of China’s own government, which has quarantined Wuhan.

Related: When will there be a coronavirus vaccine? 5 questions answered.

But in late January, before the quarantine kicked in, thousands of tourists from Wuhan flew into Thailand to celebrate Lunar New Year. Most have left. Some still remain, however, and that has helped stoke both paranoia and prejudice.

Last week, one of Thailand’s top morning shows, warning the public that “this virus is a pandemic,” ran a segment on a mysterious puddle on the floor of a Bangkok train. A photo of the wet spot was uploaded to Facebook by a commuter who, in a profanity-laden post, accused a Chinese man of urinating on the floor. She ended her post with “the bastard did this during a pandemic ... this is our goddamn country!”

The photo and warning were broadcast, seemingly without verifying the facts, on national television.

This climate of suspicion is heavy among those in the tourism industry, said a 51-year-old guide named Thongpul who preferred to only give his first name. But his peers’ fear of contracting the virus, he said, is superseded by a greater fear.

What if China’s quarantine spreads beyond Wuhan — and all Chinese tourists quit coming?

The notoriously maddening crowds inside the Temple of the Emerald Buddha and other sites are actually far less noisy than before, Thongpul said. Tourists from China are staying home, and if this continues, many in the tourism industry may be struggling to pay rent this month.

His approach — and that of many others in his line of work, he said — is to keep braving the tourist crowds every day, fortified by a sense of stoicism.

Sure, the virus is frightening, he said. But that’s not what keeps him awake at night.