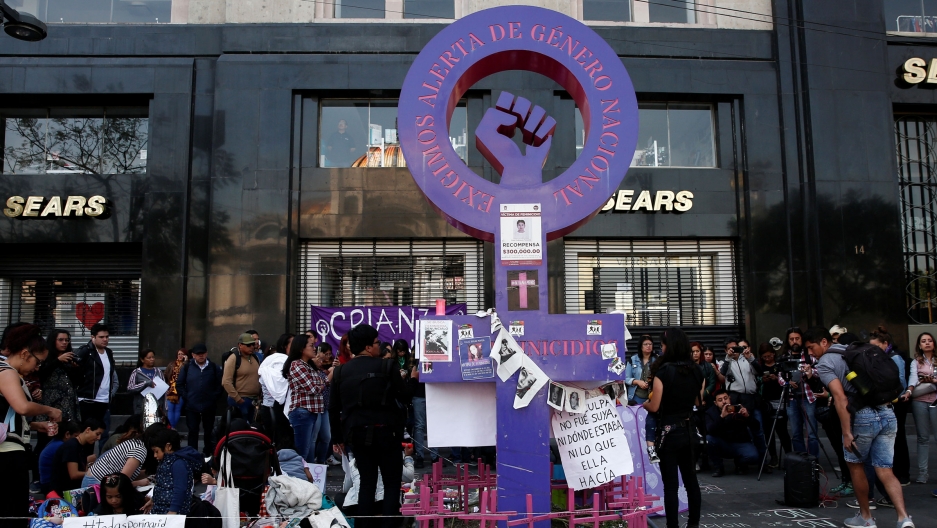 People gather in memory of 7-year-old Fátima Cecilia Aldrighett, who went missing and whose body was discovered inside a plastic bag, at an anti-femicide monument in Mexico City, Feb. 19, 2020.

Women in cities across Mexico have been protesting almost daily in response to two horrific murders in Mexico City this month. Ingrid Escamilla, who was 25, was reportedly murdered and mutilated by her boyfriend, and Fátima Cecilia Aldrighett, who was 7, was abducted as she left school and found dead in a rural area.

They are among the victims of an astonishing level of violence against women in Mexico — an average of 10 women were killed every day last year, according to official government figures. And among many activists responding is Estefanía Vela Barba, an attorney who directs Intersecta, a Mexico City-based nongovernmental organization working to end gender discrimination. Vela Barba spoke with The World’s host Marco Werman.

Marco Werman: President Andrés Manuel López Obrador says this is not about gender violence. He, instead, says it fits within overall violence in Mexico. What do you make of that?

Estefanía Vela Barba: There is a part of what the president says that is true. The murders of women in Mexico started rising at the same time the murders of men in Mexico started rising at the end of 2007, when the so-called war on drugs began. So, on that point, what the president says is true. The problem, though, is that when you say only that, you ignore important differences in the way men and women are killed.

What would you say are the aspects of violence against Mexican women today that you believe makes what we are seeing femicide?

There is the case of Ingrid, who was killed by her partner, and who months before her killing had filed an intimate partner violence complaint with authorities. But authorities did not do enough to help her get out of that relationship, and the result was that this man killed and tortured her. We saw another case this past weekend with Fátima, a 7-year-old girl who was abducted, raped and then killed and left in a trash bag. It is important for us to see these important ways in which women are killed. We need to take everything into account and design policies that are able to give women a way out and not experience this violence.

You see that distinction, but it appears many people across Mexico share López Obrador's opinion that this really is all just part of the context of overall violence in Mexico. Why do you think that is such a common perspective?

This is something we see not only in Mexico, but in other countries. In the United States, the battle over Black Lives Matter and the Blue Lives Matter response is an example of how when groups try to draw attention to the fact that some groups don’t actually enjoy equal rights, there is a formulaic idea of equality that kicks in. People think that by pointing out differences, you are somehow saying that men’s lives don’t matter. But what we’re saying is that these are the facts. And if we don't recognize that murders don't just happen in the street, but they also happen in the home, you’re never going to arrive at solutions that address both problems.

You've been a very visible advocate for women's rights in Mexico for years. You're a researcher, but you also have the video blog "Estereotipas" and you’ve written for several of Mexico’s mainstream publications. Have you yourself faced harassment because of your work and how do you deal with it?

Whenever you try to challenge the way things are, there will be a reaction. Most women I know that have raised their voice have, in one way or another been questioned about why they’re putting forth these issues, or the issues themselves have been disqualified. Every time there is a protest, there is a reaction.

Have you been protesting? Do you plan on taking part in future protests?

Yes. As you know, the 8th of March will be the International Women's Day. It's an important day to reflect on what is the status of women's rights. And we need to demand more, especially considering that the authorities’ response has been to focus on criminalization, increasing penalties that are high already. I think that that's also part of the problem, not just the violence, but the way authorities handle the murders and the supposed solutions that they propose, which are punitive solutions that do nothing to change the reality of what is happening. So, I think that, yes, protests are necessary protests in every way possible and fighting together to demand more.