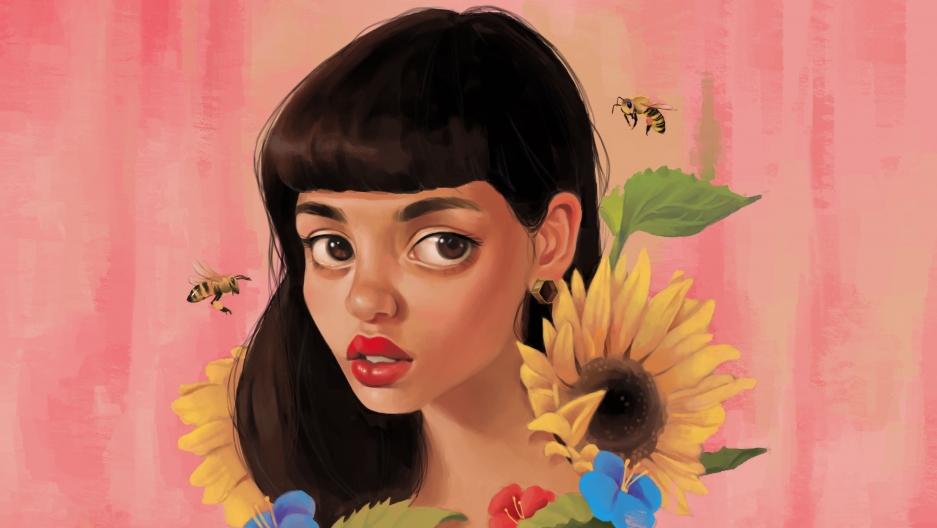 Grecia Zamora González was asked to create an illustration for María Delgadillo, a 74-year-old beekeeper whose body was found partially burned. Delgadillo is older than most femicide victims but as in many femicide cases, her suspected murderer was a man she knew. González drew Delgadillo as a younger woman, with accents like bees and flowers to signify her occupation.

Last September, two Mexican artists came across a Facebook post with an extensive list of victims of femicide — the killing of women where the motive is based on gender. The list was posted by an activist who goes by the pseudonym, Frida Guerrera (“Frida the Warrior”); it marked over a thousand femicide victims in Mexico in just the first nine months of 2017.

“It was shocking for us to see so many names,” said one of artists, who asked not to be named. “So, we decided to break the silence.”

The pair created the Instagram project, No estamos todas (@noestamostodas), which translates to “We are not all here,” and is dedicated to raising awareness about femicide in Mexico with original illustrations of victims. No estamos todas’s organizers say they sought to present each slain woman as more than just a crime statistic. The two organizers are women in their early 20s who wish to remain anonymous so as to keep the project's focus on the victims, they say. Also, women in Mexico who speak out against femicide are often criticized and can face danger.

“I want it to be about what it is, about the femicides in Mexico,” one of the No estamos todas organizers said.

There were 2,585 women murdered in Mexico in 2017, according to official figures; 671 of those cases were investigated as femicides. However, projects like Frida Guerrero’s Facebook list; Yucatán Feminicida, which investigates femicide cases; and the femicide maps by activist María Salguero show the numbers can be misleading. Female homicides are on the rise in the country. The No estamos todas organizers gathered information on femicide victims from these projects.

They published the first illustration on Instagram on Nov. 24, one day before the International Day for the Elimination of Violence Against Women. More than 80 illustrations have been uploaded since then. The styles vary wildly — from the monochromatic to the colorful, realistic to abstract, playful to more serious — but the sentiment in each is the same. Every image has a caption that reads, “No estamos todas, nos falta … ,” that's Spanish for “We are not all here, we are missing.”

The phrase is followed by the femicide victim's name, age and city of origin.

At first, the organizers reached out to illustrators in their circle in Mexico. No estamos todas is now casting a wider net — working with 130 artists — and some are based in other countries including China, the United States and other parts of Latin America. Most of the illustrators are women.

When an artist agrees to participate, organizers send them information about a femicide victim, including links to related news articles and photos along with guidelines for contacting the families, should they choose to. The artist is free to draw the women however they wish, with the caveat that the illustration reflects the person’s life — not death. The organizers see the project as a celebration of life and want to avoid sensationalizing the murders.

“It’s a delicate matter,” said Melissa Zermeño, a Mexico City-based illustrator who has worked with the media network, Televisa. She drew Lizeth Edith Guzmán Ramírez, a 32-year-old woman killed in the state of Puebla. “She was a housewife. She asked her husband for money for expenses of the home and, well, he got mad at her and killed her.”

Zermeño said the illustration took longer than usual because of the project’s importance. “When something is important for me, I kind of want to get it right,” Zermeño said. “Also, in case the family saw — I would like them to like it [and] also to have a last memory of the person, even though it’s not a portrait of her.”

Most of the No estamos todas subjects are from Mexico, but the project has started to include women from other parts of Latin America. That reflects the fact that 14 of the 25 countries with the highest rates of femicide in the world are in Latin America and the Caribbean region, according to the Small Arms Survey cited by the United Nations.

No estamos todas is part of a growing movement against gender-based violence in Latin America; the issue has sparked protests and campaigns like #NiUnaMenos ("Not One Less"). On a visit to Peru in January, Pope Francis denounced femicides and gender-based crimes and called for legislators in the region to protect women and to change the cultural mindset.

Catalina Matamoros, an animator and illustrator based in Colombia, said femicide is a big problem in her country because of machismo culture and the tendency of people to blame the victim and not the abuser.

“I believe that’s a big problem not only in Mexico but in Colombia and Latin America because we are very accustomed to what the man wants and what the man says,” Matamoros said.

Her drawing is of Giselín López, a 23-year-old woman from the state of Puebla. It depicts a childlike woman holding a baby because López was pregnant at the time of the murder. López is also wearing blue to signify her occupation as a police officer.

“This was a human being, a person. This person had a family; this person had a life,” Matamoros said. “In these cases, when there’s violence and it’s against women, what did she do?”

Grecia Zamora González was asked to do an illustration of María Delgadillo, a 74-year-old beekeeper whose body was found partially burned. Delgadillo was older than most femicide victims — but as in many other cases, her suspected murderer was a man she knew. González portrayed Delgadillo as a younger woman, accentuating her portrait with bees and flowers to signify her occupation.

Finding out about these stories, you realize that, “This is something that could happen to you or to a person that is close to you,” said González. “So, for me, it's a gift to that person but it's also a gift to anyone who has felt like that.”

Monica Alexander is one of the first US-based illustrators to join the project. She was born and raised in Houston and now lives in Atlanta. Her family is from the city of Monterrey, Mexico, and she visits the country every year.

“A lot of my work is stemmed from, I guess, feminism and intersectional feminism and my own privilege as a white person Latina,” said Alexander. “I kind of need to spread the word on what is happening in our country. Most of these women are women of color being murdered down there.”

Alexander’s illustration is of Rosario Morales who died in April of last year, a 21-year-old who was shot in the head in Puebla. Alexander wanted to find a way to remind people of the woman’s life and not the way she died.

“She was somebody with a family,” Alexander said. “Being from a Mexican family, I know that she probably was part of a very tight-knit community.”

Alexander used bright yellows and purples and added elements of nature like flowers and foliage. “I feel like when people see nature, they see life and they’re kind of reminded of where we come from,” she said.

Frida Guerrera, the activist and author of the Facebook post that inspired the project, is pleased to see it has “generated something as beautiful as the work the girls are doing.”

She is hopeful that it will have an impact on the issue of femicide. “Unfortunately, it does not stop, but I think that the youth will continue to drive it, to end so many deaths.”

“We’re only talking about the ones that have been killed,” one organizer said. “But there are many others living under violence.”