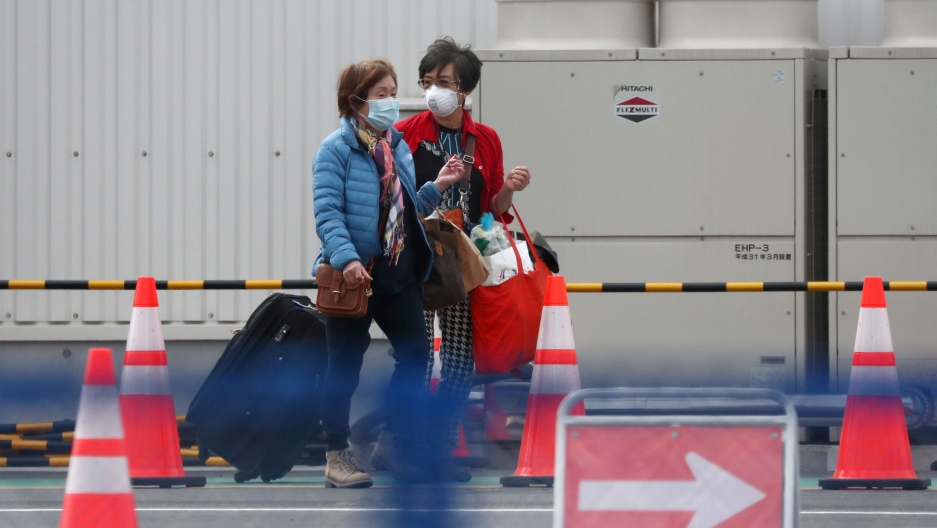 Hundreds of people began disembarking the Diamond Princess cruise ship in Japan on Wednesday after being held on board for more than two weeks under quarantine. But, Japanese authorities announced 79 new cases had been discovered on board, bringing the total above 620 prompting growing criticism over the handling of the biggest coronavirus outbreak outside China.

In China itself, the death toll from the coronavirus climbed above 2,000, but the tally of newly reported cases fell for a second day to the lowest since January, offering hope and helping Asian shares and US stock futures rise.

Discussion: What we know and don’t know about COVID-19

China is struggling to get its economy back on track after imposing severe travel restrictions to contain a virus that emerged in the central province of Hubei late last year.

Beyond mainland China, six people have died from the disease, and governments around the world are trying to prevent it from spreading into a global epidemic. The Diamond Princess has been quarantined at a dock at Yokohama near Tokyo since Feb. 3, initially with 3,700 people aboard.

From Wednesday, passengers who tested negative and showed no symptoms were free to leave. Around 500 were expected to disembark on Wednesday, with the rest of those eligible departing over the next two days. Confirmed cases were to be sent to hospital, while those who shared cabins with infected passengers may still be kept on board.

Around half of the passengers and crew are Japanese, and are free to go home once cleared to leave. Other countries have said they will fly passengers home and quarantine them on arrival. The United States flew more than 300 passengers to air bases in California and Texas this week.

"I am very keen to get off this ship," Australian passenger Vicki Presland told Reuters over a social media link. She was among a group of Australians getting off to catch an evacuation flight back to 14 days of quarantine in the city of Darwin.

Matthew Smith, an American passenger who remained on board after declining the US evacuation earlier this week, tweeted video of passengers departing with their suitcases.

"Captain wishes 'Arrivederci' to the guests departing the ship today but omits his usual 'Buon Appetito' to those of us who are still awaiting our fates. Hey, what are we — chopped liver?!" he wrote.

The rapid spread of the disease aboard the ship has drawn strong criticism of the Japanese authorities, just months before Japan is due to host the Olympics.

Infectious disease specialist Kentaro Iwata of Japan's Kobe University Hospital, who volunteered to help aboard the ship, described the infection control effort on board as "completely inadequate," and said basic protocols had not been followed.

Health Minister Katsunobu Kato defended Japan's efforts: "Unfortunately, cases of infection have emerged, but we have to the extent possible taken appropriate steps to prevent serious cases," Kato said in a report by state broadcaster NHK.

The US Centers for Disease Control and Prevention (CDC) said Japan's efforts "may not have been sufficient to prevent transmission among individuals on the ship."

From the start, experts raised questions about quarantine on the ship. Passengers were not confined to their rooms until Feb. 5. The day before, as passengers were being screened, onboard events continued, including dances, quiz games and an exercise class, one passenger said.

The promising sign out of China came from the National Health Commission, which reported 1,749 new confirmed cases, the lowest tally since Jan. 29. Hubei — the epicenter of the outbreak — reported the lowest number of new infections since Feb. 11, while outside of Hubei there were just 56 new cases, down from a peak of 890 on Feb. 3.

The latest figures bring the total number of cases in China to more than 74,000 and the death toll to 2,004, three-quarters of which have occurred in Wuhan, Hubei's provincial capital.

On top of tough steps taken to isolate Hubei, where the flu-like virus originated in a market illegally selling wildlife, state media reported the province would track down anyone who visited doctors with fever since Jan. 20 or bought over-the-counter cough and fever medication.

Chinese officials have said the apparent slowdown in infection rates is evidence that the strict measures are working. Epidemiologists outside China have said in recent days that the reports from there are encouraging but it is still too early to predict whether the epidemic will be contained.

Chinese officials have been putting on a brave face, saying the economic impact of the virus would be limited and short-term. President Xi Jinping said China could meet its 2020 economic targets, media reported.

Big manufacturing hubs on the coast are starting to loosen curbs on the movement of people and traffic while authorities prod factories to get back to work.

By Linda Sieg and Ryan Woo/Reuters