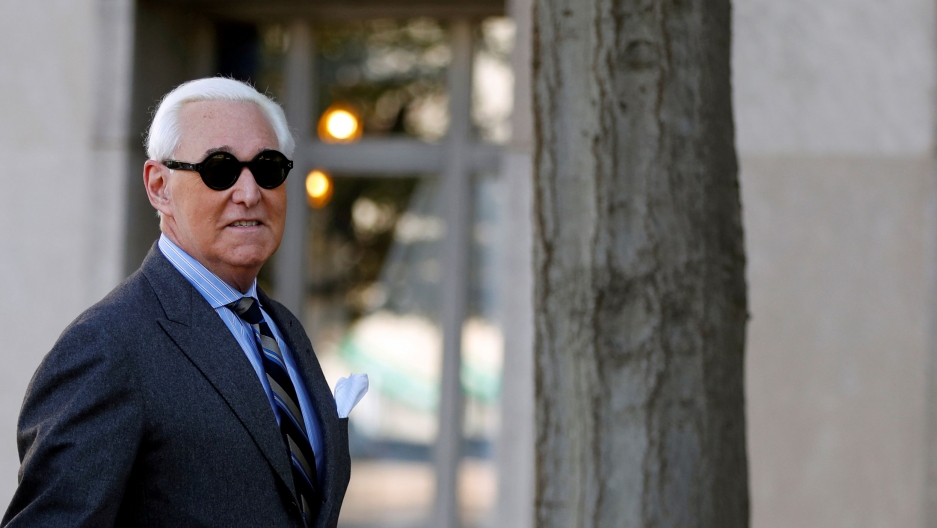 Roger Stone, former campaign adviser to US President Donald Trump, arrives for the continuation of his criminal trial on charges of lying to Congress, obstructing justice and witness tampering at US District Court in Washington, DC, Nov. 13, 2019.

Under pressure from Trump, the US Justice Department on Tuesday abruptly moved to seek a shorter prison sentence for Stone, and all four prosecutors quit the case after the highly unusual reversal.

Senior department officials — hours after Trump complained on Twitter that Stone was being treated unfairly — overrode the sentencing recommendation of seven to nine years made on Monday by the federal prosecutors who secured Stone's conviction. Stone was found guilty in November on seven counts of lying to Congress, obstruction and witness tampering.

In a new court filing, a Justice Department official who had not previously worked on the case called that recommendation "excessive and unwarranted" and said the department would not make a formal sentencing recommendation.

Trump told reporters he thought the initial recommendation was "ridiculous" but said he did not speak to the Justice Department about it.

"I'd be able to do it if I wanted. I have the absolute right to do it. I stay out of things," Trump said.

The four prosecutors who won Stone's conviction — Aaron Zelinsky, Adam Jed, Michael Marando and Jonathan Kravis — withdrew from the case. Kravis told the court in a filing that he was also quitting his job as a federal prosecutor.

Trump also withdrew the nomination of Jessie Liu, a former US attorney in Washington whose office prosecuted Stone, for the post of Treasury undersecretary for terrorism and financial crimes, a source familiar with the matter said.

A senior Justice Department official, speaking to reporters on condition of anonymity, called the timing of Trump's tweet an "inconvenient coincidence." The official said he did not know why the four prosecutors withdrew, but said it appeared to be in protest. The official said it was "surprising that that would be the line in the sand."

US District Judge Amy Berman Jackson is due to sentence Stone on Feb. 20.

In a tweet late on Tuesday, Trump criticized Jackson's handling of another criminal case involving his former campaign chairman Paul Manafort, who was convicted in 2018 on tax fraud, bank fraud and other charges.

"The president seems to think the entire Justice Department is just his personal lawsuit to prosecute his enemies and help his friends," Chuck Schumer, the top Senate Democrat, told reporters.

Schumer asked the department's internal watchdog to investigate. Representative Jerrold Nadler, chairman of the House of Representatives Judiciary Committee, said he also would investigate the reversal.

"AG Barr must stop being the President's lapdog. They are turning us into a banana republic," Senator Chris Van Hollen said on Twitter.

Stone, who has labeled himself a "dirty trickster" and "agent provocateur" and famously has the face of former President Richard Nixon tattooed on his back, was one of several Trump associates charged with crimes in Mueller's investigation.

In a Monday court filing, prosecutors said their proposed sentence fell within US guidelines and would "accurately reflect the seriousness of his crimes and promote respect for the law."

That came as a surprise to senior Justice Department officials who were expecting prosecutors to ask for a lower range, said a second official who spoke on condition of anonymity.

Legal experts said it would be unusual for prosecutors to change their proposed sentence after filing a formal recommendation to the court, especially on a high-profile case like this in which senior Justice Department officials as well as courtroom prosecutors are involved in the decision-making.

Several said the proposed sentence struck them as unusually severe. Stone's defense team, in a filing late on Monday, disputed the prosecution's calculation and proposed a range of between 15 and 21 months. They asked the judge for a sentence below that range.

"It is high, but the prosecutors obviously felt there were extenuating circumstances that justified the enhancements," said Lynn Niels, a former federal prosecutor.

The new Justice Department filing noted that Stone's guideline sentence would be significantly less — about three to four years — if the charge that he threatened a witness, Randy Credico, was not used in the calculation.

Stone was convicted of the charge. The position taken by the department on the witness tampering charge echoed arguments made by Stone's own defense team in their memo filed late on Monday.

Mueller's investigation detailed a Russian campaign of hacking and propaganda in the 2016 election and extensive contacts between the president's campaign and Moscow. Stone was one of only two of Trump associates charged in the investigation who went to trial rather than pleading guilty.

Trump has the power to pardon people for federal crimes, although he has yet to use it in the cases of other former aides convicted in the wake of the Mueller investigations.

The senior official said he was not concerned about any possible "ripple effect" that could occur in other cases after the four prosecutors quit the case, and said the department's change in its position was "not really that drastic."