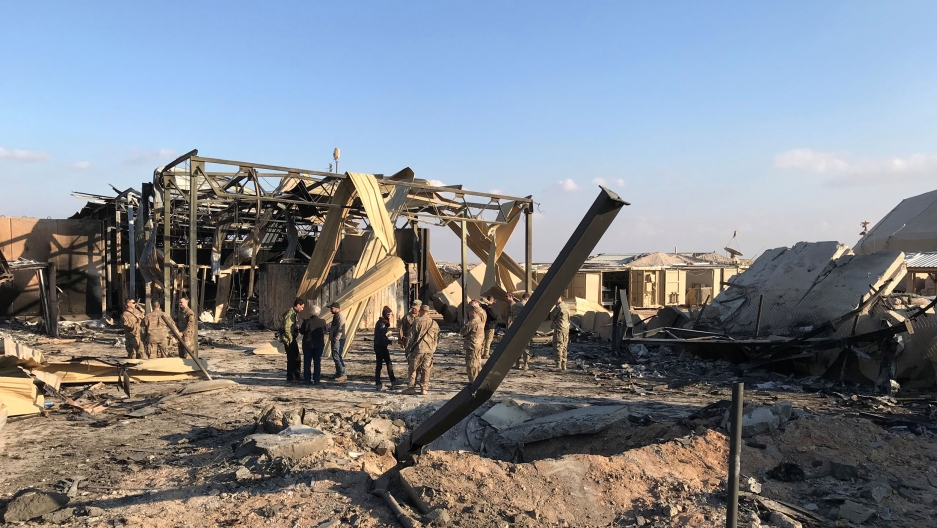 US soldiers inspect the site where an Iranian missile hit at Ain al-Asad air base in Anbar province, Iraq, Jan. 13, 2020.

The US military has increased the number of cases of traumatic brain injury to over 100 service members diagnosed, stemming from Iran's missile attack on a base in Iraq in January.

No US troops were killed or faced immediate bodily injury when Iran fired missiles at the Ain al-Asad base in Iraq in retaliation for the US killing of Revolutionary Guard General Qasem Soleimani in a drone strike at the Baghdad airport on Jan. 3.

The missile attacks capped a spiral of violence that had started in late December. Both sides have refrained from further military escalation, but the mounting number of US injuries could increase scrutiny on the Trump administration's approach to Iran.

Reuters was first to report earlier on Monday that there were over 100 cases of TBI, up from the 64 previously reported last month.

The Pentagon, in a statement, confirmed that so far 109 US service members had been diagnosed with mild traumatic brain injury. It added that 76 of them had returned to duty.

The US military in the past had said to expect an increase in numbers in the weeks after the attack because symptoms can take time to manifest and troops can sometimes take longer to report them.

Army General Mark Milley, chairman of the Joint Chiefs of Staff, said last month that the service members suffering from traumatic brain injuries had been diagnosed with mild cases. He added that the diagnosis could change as time passed.

Symptoms of concussive injuries include headaches, dizziness, sensitivity to light and nausea.

Pentagon officials have repeatedly said there has been no effort to minimize or delay information on concussive injuries. But the disclosures following Tehran's attack have renewed questions over the US military's policy regarding how it internally reports suspected brain injuries and whether they are treated publicly with the same urgency as loss of limb or life.

"I've called on the Pentagon to ensure the safety & care of our deployed forces who may be exposed to blast injuries in Iraq," Ernst said on Twitter.

US President Donald Trump appeared to play down the brain injuries last month, saying he "heard that they had headaches and a couple of other things" following the attack, prompting criticism from lawmakers and a US veterans group.

Various health and medical groups for years have been trying to raise awareness about the seriousness of brain injuries, including concussions.

Since 2000, about 408,000 service members have been diagnosed with traumatic brain injury, according to Pentagon data.