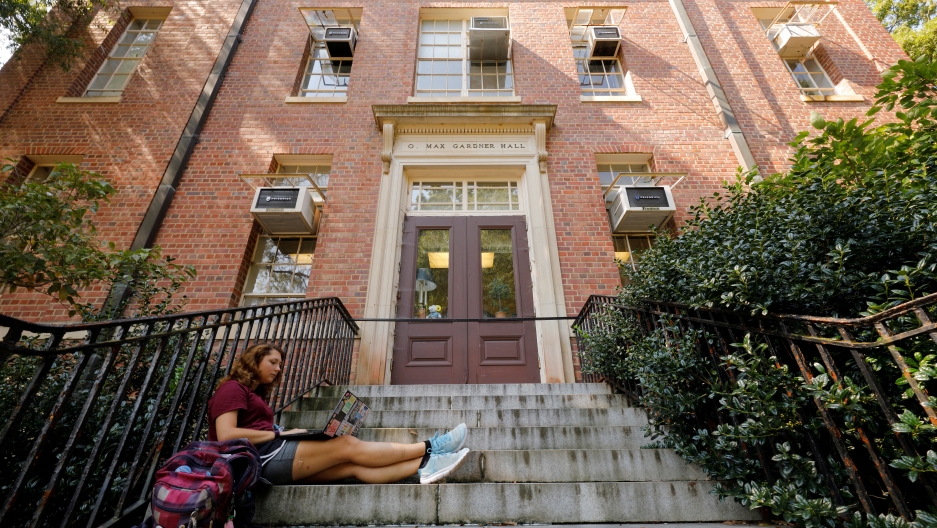 A student works on the steps of a classroom building on the campus of University of North Carolina at Chapel Hill, North Carolina, US, Sept. 20, 2018.

It was 5 p.m. on a Thursday in Nairobi, Kenya, and the streets were crowded with people rushing to get home for dinner. But Philemon, a 25-year-old science researcher, was just getting ready for his second job as an academic writer.

Philemon is part of the global industry of contract cheating in which students around the world use websites to commission their homework assignments. He asked that his full name not be used for privacy reasons due to the sensitive nature of his work.

“My clients have been coming from various regions in the world,” Philemon said. “I have worked for a client in Australia, in the US. In Kenya? Very rare.”

Philemon began academic writing in 2017 when he was a university student seeking a flexible part-time job. Today, Philemon can make as much as $1,000 a month — as long as he gets good grades for his clients.

“You have to make sure he gets an A, so that in the future he will refer his or her friends to you.”

“You have to make sure he gets an A, so that in the future he will refer his or her friends to you,” Philemon said.

In recent years, contract cheating has become a lucrative, albeit informal, business in Kenya, which has become one of the largest sources of academic writers in the industry.

“If we look at where writers are based, Kenya is at the top of the list,” said Thomas Lancaster, a professor at Imperial College London who studies the industry.

“There are incredibly qualified people in Kenya. Very high levels of English. Very able to write essays quickly and when they want to, to a high standard.”

“There are incredibly qualified people in Kenya. Very high levels of English. Very able to write essays quickly and when they want to, to a high standard,” he continued.

Lancaster began studying contract cheating more than a decade ago when he noticed one of his own students posting assignments online. “I found one of my students who was putting up my assignment up for tender on an internet site. So, people were bidding different amounts of money to complete that computer programming assignment,” he said.

By contracting original homework assignments, students could bypass the detection of anti-plagiarism software developed in the 1990s.

Related: 'Intersex' is counted in Kenya's census — but is this a victory?

Today, Lancaster estimates the global contract cheating industry is worth more than $1 billion, but academic writers in Kenya typically see a small share of it.

“The contracting industry takes the elephant's share of the money,” said Charles, an academic writer in Kenya for more than 10 years who also asked that his full name not be used.

Websites promoting tutoring services and homework help serve as middlemen between students seeking to outsource their work and academic writers seeking cash. In much the same way as eBay or Craigslist, students set up online profiles that keep their identities anonymous and post details about their homework assignments, from the number of pages to the due date.

According to Philemon, these websites can take more than 30% of the cut for a commission. Charles vouched for that, saying that in his experience, if a student is willing to pay $40 per page for an essay, a Kenyan writer might only receive $6.For experienced writers like Charles, the ambition is to get rid of the middleman completely by establishing direct relationships with clients that continue throughout college.

Writers who manage to establish direct, regular clients have to take care to circumvent website administrations, as the golden rule of the industry is protecting the anonymity for cheating students.

“In fact, if you are found from the writer’s side [by the platform], contacting a student, consider yourself fired in almost all cases.”

“In fact, if you are found from the writer’s side [by the platform], contacting a student, consider yourself fired in almost all cases,” Charles said.

“One fairly unique behavior in Kenya has been groups of writers clubbing together to buy access or gain access to a writing account with a contract cheating site, and then sharing out the work in that account,” said Lancaster, from Imperial College.

But subcontracting comes with its own risks. A few days before speaking with The World, Philemon had bid on an econometrics assignment posted by a student from an American college who was only willing to pay $30.

When Philemon failed to negotiate for a higher price, he decided to subcontract the work.

“I needed someone who was cheap, who could do it at a cheaper cost,” said Philemon, who posted the assignment on a private Facebook account used by Kenyan academic writers to trade and sell assignments and accounts on contract cheating websites.

Just a few hours before the assignment was due, Philemon’s subcontractor told him he wasn’t able to complete it. “I found a person who could do it, but then he let me down. They found it too complex,” said Philemon, whose account on the contract cheating site was consequently suspended temporarily.

For the students who commission out their homework, the perils are more obvious. While contract cheating presents a way to avoid anti-plagiarism software, it isn’t foolproof. Especially when there's a discerning teacher.

Professor Christian Moriarty, who teaches ethics and law at St. Petersburg College in Florida, remembers when he caught one of his own undergraduate students cheating in a mandatory ethics class. “The plagiarism software did not come up with anything,” he said.

“But I was highly suspicious. I invited her to my office, and I just asked plainly, ‘Did you write this?’” said Moriarty, noting that the student’s essay was of a higher standard than assignments she had submitted previously. “She said ‘no.’”

For Moriarty, who serves on the board of the International Center for Academic Integrity, this is an example of why teachers should be more empathetic when dealing with students who cheat. He argues that institutions should focus on learning why students cheat in the first place.

More than a dozen US states have legislation against the practice, and in Australia, lawmakers are considering new legislation that would make it an offense to provide or advertise cheating services. In the UK, higher education institutions have urged Paypal and Google to lock payments and advertisements for contract cheating websites.

But legislation has failed to quell the practice, which shows no signs of slowing down.

Moriarty argues that legislation alone isn’t sufficient to address contract cheating, and suggests that institutions do more to teach about integrity, and communicate the value of education.

“The No. 1 argument they respond to more than anything else is that if our institutions become known for tolerating cheating, that students can get away with cheating here, then what is the value of your degree at that point? Students want their degrees to be seen as valuable.”

“The No. 1 argument they respond to more than anything else is that if our institutions become known for tolerating cheating, that students can get away with cheating here, then what is the value of your degree at that point? Students want their degrees to be seen as valuable,” Moriarty said.

Communicating the value of education has been a perennial challenge for higher education institutions, especially in the age of admissions scandals and heated conversations about equity in education.

For academic writers like Charles, the intention is not to compromise the value of higher education institutions. In fact, many academic writers in Kenya end up in this line of work because despite having degrees, they are unable to find jobs in a troubled economy.

“There’s a lot in the industry that is instigated by need. There is a need to earn,” said Charles, who has a bachelor's degree in education, but has completed assignments ranging from essays on nuclear medicine to PhD dissertations.” Still, the irony that a Kenyan hundreds of miles away is doing work for American students isn’t lost on him.

“You don’t have a job in Africa and you are writing an article about missing jobs in Atlanta,” he said.

But Charles doesn’t blame the students whom he helps earn degrees. In his mind, the value of education and learning goes beyond certificates and degrees.

“The society has construed the purpose of learning for academic purposes only and you get certificates,” said Charles, who is working to complete a master’s degree in Kenya and would like the opportunity to study abroad one day.

“Here, you don’t get a certificate, but the information is quite interesting.”