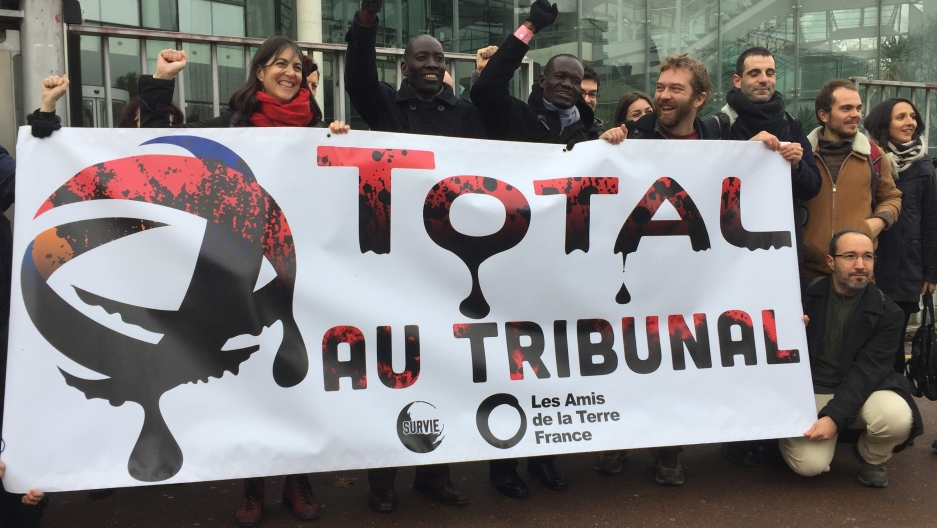 Jelousy Mugisha, Fred Mwesigwa, and activists from Friends of the Earth France and Survie stand outside the civil court in Nanterre, France, where the hearing took place on Dec. 12, 2019.

Dorothy Mbabazi used to live comfortably as a vegetable farmer in western Uganda. The single mother of seven had 9 acres of land in the Buliisa region — nestled between Lake Albert and Murchison Falls National Park — and could afford good food, basic necessities and her children's school fees.

Then Total SA came to town.

The French oil multinational is the main operator of a 425-square-mile oil megaproject under development in the region known as the Tilenga project. Together with the British firm Tullow Oil and China National Offshore Oil Corporation (CNOOC), Total plans to drill more than 400 wells across six oil fields and build a 900-mile pipeline to Tanzania.

Activists estimate the projects could displace as many as 50,000 farmers in Uganda's western and central regions.

Now, together with a group of nongovernmental organizations, Ugandan farmers affected by Total are fighting back. Four Ugandan and two French NGOs have launched a lawsuit in France on behalf of the farmers that could hold European multinationals accountable to local communities and reshape the way they do business around the world.

“Without land, I can’t do anything."

“Without land, I can’t do anything,” Dorothy Mbabazi said in Lugungu, through a translator, as she methodically peeled her way through a pile of cassava roots — payment for working another farmer’s fields. Two of her children have dropped out of school and she cannot always afford medication for one of her sons who suffers from sickle cell anemia. 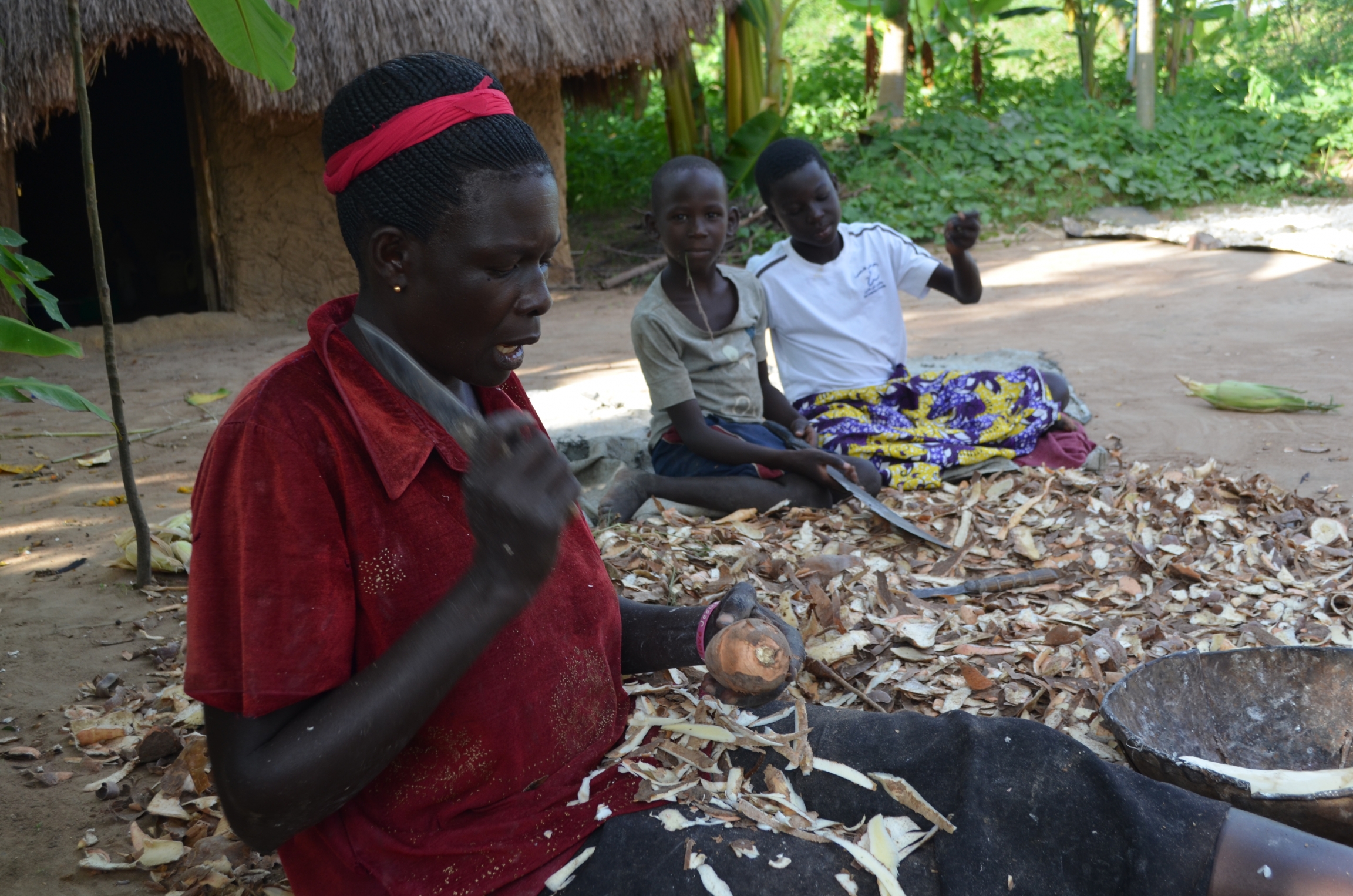 Dorothy Mbabazi, 45, says she refuses to sign a compensation agreement until she is offered a suitable piece of alternative land. She was forced off her land in May 2017, and two of her seven children are no longer in school, Buliisa District, Uganda, Nov. 30, 2019.

In May 2017, Mbabazi was among the first people that Total notified that access to her land would be blocked. Security guards were soon stationed in the area. Offered a choice between cash or a land-for-land deal, she chose land, but Total didn't immediately offer any up. For two years, Mbabazi waited for Total to show her where to move while living on rented land nearby. In May 2019, when local Total officials finally took Mbabazi to her new plot of land, she felt it was not comparable to what she lost. She requested better access to roads and basic services before she moves, but Total has not responded to her request.

She is one of an estimated 50,000 Ugandans affected by the Tilenga project and East African Crude Oil Pipeline, according to Friends of the Earth France. Nearly 5,000 have been displaced, according to Total.

‘We are tired of starving’

The case is the first to be tried under France’s new “duty of vigilance” law, introduced in 2017, which requires large corporations to develop vigilance plans and ensure responsible social and environmental practices within their subsidiaries and subcontractors.

At the forefront of a global movement, the law was established in the wake of Bangladesh’s Rana Plaza disaster, in which an eight-story industrial building collapsed, killing more than 1,000 people including garment workers producing clothing for major international brands.

Dickens Kamugisha, of the Africa Institute for Energy Governance, one of the Ugandan NGOs behind the French lawsuit, in October 2019 presented the case as evidence to a United Nations working group drafting a treaty to regulate transnational corporations’ activities in international human rights law. Discussions about similar legislation are taking place in the United Kingdom, Netherlands, Germany, Finland, Switzerland and the European Commission.

The Tilenga suit alleges that Total’s subsidiary, Total Uganda, and the subcontractor it hired, Atacama Consulting, forced farmers to sign compensation agreements under pressure or intimidation and deprived them of access to their land before compensation was received.

That is what Margaret Nyakato, a 50-year-old widow and mother of eight, says happened to her. When she and her nieces and nephews were approached in early 2017 about the 16 acres of land they shared in Buliisa region, they chose cash rather than land-for-land compensation.

They asked for about $5,700 per acre, but when a team of government ministers and gun-toting soldiers turned up in town several weeks later, Nyakato said some of her relatives were intimidated. They agreed to accept about a quarter of the payment they originally asked for in August 2018.

Nyakato now shares a rented compound with Mbabazi’s family about 1.5 miles from her original home in the Buliisa region.

“We are tired of starving ... If we were refugees it would be better than this. ...Now I struggle to find 500 Ugandan shillings [$0.14] for cooking oil. I haven’t eaten since morning.”

“We are tired of starving ... If we were refugees it would be better than this,” she said, gesturing around her with a vegetable knife. “Now, I struggle to find 500 Ugandan shillings [$0.14] for cooking oil. I haven’t eaten since morning.” 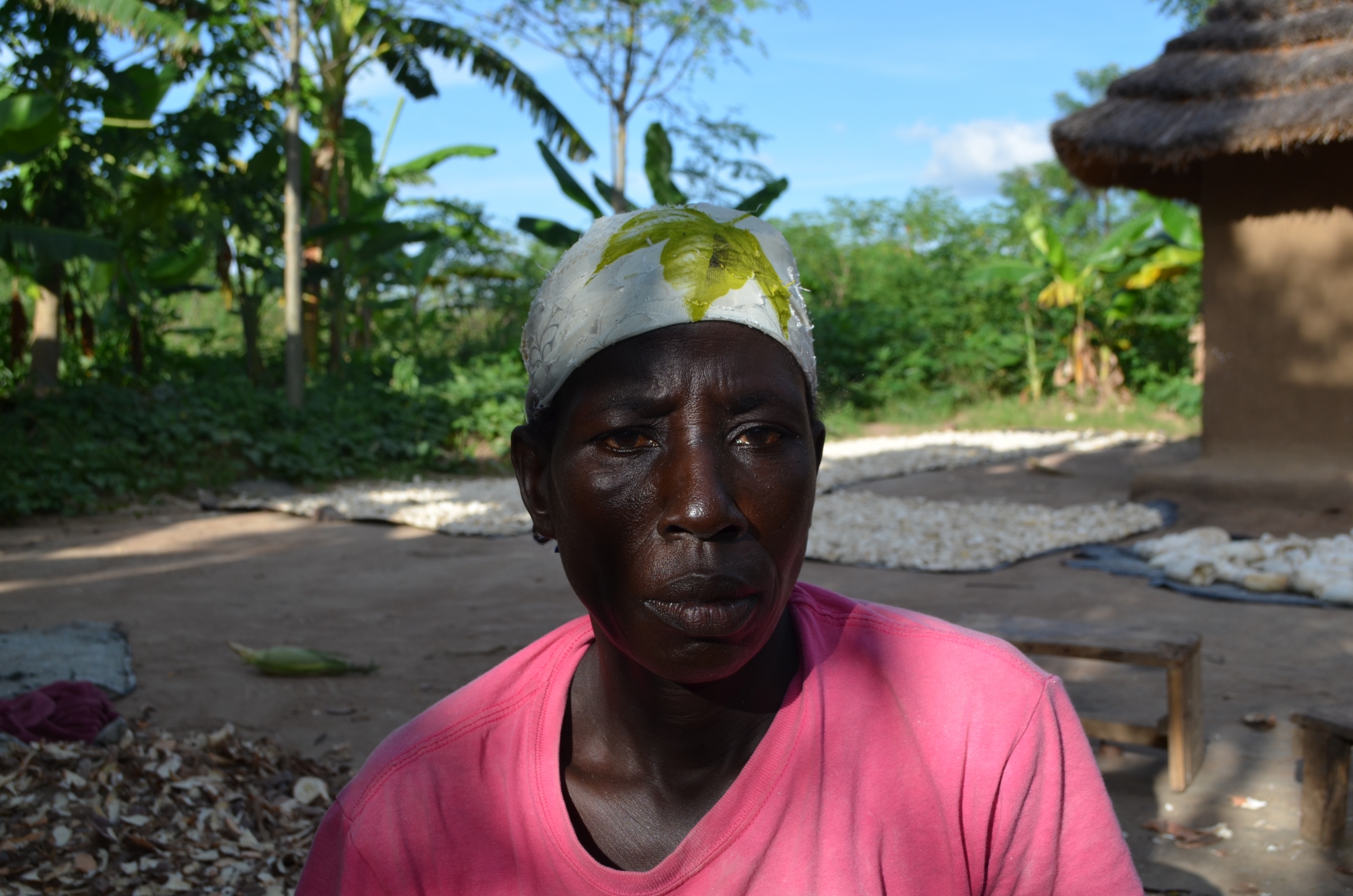 ‘A curse on my life’

Total’s land acquisition resettlement framework specifies that the Ugandans should be compensated prior to having their land seized. But, the company argued, it is the responsibility of its subsidiary to implement those regulations.

“That is not enough under the new law,” said Juliette Renaud, a senior campaigner with Friends of the Earth France, one of the plaintiffs. The French legislation requires parent companies to establish procedures to regularly assess the actions of their subsidiaries, subcontractors and suppliers.

On Dec. 12, in a civil court in the Paris suburb of Nanterre, the plaintiffs raised concerns about oil development’s environmental cost. They argued that Total’s vigilance plan — which includes a risk assessment by type of risk rather than one based on individual projects — does not adequately address the specific hazards the project poses.

According to Total’s lawyers, however, that level of precision is not required and would make the vigilance plan “unreadable.”

“This approach by type of risk — and not project by project — corresponds to the traditional approach of risk mapping and is also shared by other French companies subject to the vigilance law,” Stéphanie Dezaunay, a spokeswoman for Total, said in a statement.

The six plaintiffs — two French NGOs and four Ugandan NGOs — were granted a short summary hearing with special provisions after previously arguing that the case deserved particular urgency. This included three judges instead of the usual one and an extended hearing that lasted more than two hours.

Two Ugandan villagers from the Buliisa region were present — Jelousy Mugisha, 47, a pastor and local representative of the affected community, and Fred Mwesigwa, 45, a father of three who said the Tilenga project had torn his family apart.

“Oil is a curse on my life,” said Mwesigwa, who used to earn $10.85 a day cultivating watermelon, tomatoes and greens, but now only scrapes together about $1.90 a day selling charcoal and cultivating small plots of rented land. 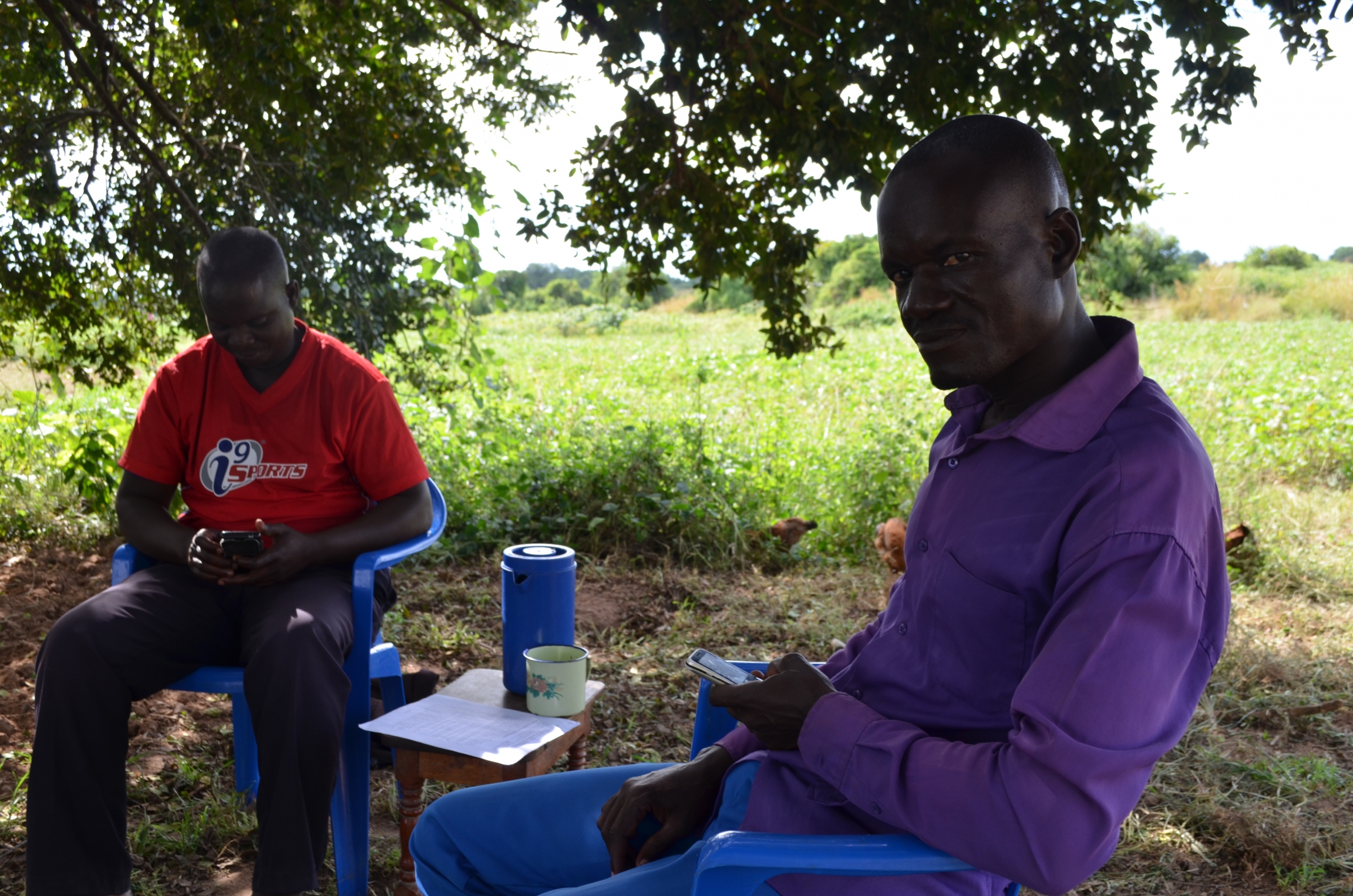 Fred Mwesigwa, 45, (right) sits with his brother Moses (left). They say none of their family members has been compensated for the land they were forced off over two years ago. Nov. 30, 2019, Buliisa District, Uganda.

He said he and his siblings had requested land-for-land compensation for the 32 acres they used to share, but some were pressured into accepting monetary payment instead. It led to a major family rift, and still, none of the relatives has been compensated.

Both Mwesigwa and Mugisha were visited at home by a Total Uganda official in the week leading up to the hearing and felt compelled to hide in a safe house, according to Survie, a French NGO involved in the lawsuit.

Upon Mugisha’s return to Uganda, he was detained at the airport for nearly nine hours and questioned about the lawsuit, according to Friends of the Earth France. On Dec. 23 and 24, 2019, unknown men attempted to break into Mwesiga’s home, according to the NGOs. He has been moved to a safe house.

‘A new law for all of humanity’

Also in attendance at the hearing was Dominique Potier, the French member of parliament who acted as rapporteur for the duty of vigilance bill. He said he was interested to see how other European countries would respond to this innovative form of French justice.

“In removing the veil on multinationals’ impunity, we are revealing international rights violations, and thanks to this lifting of the veil, we have the ability to invent a new law for all of humanity that respects human dignity."

“In removing the veil on multinationals’ impunity, we are revealing international rights violations, and thanks to this lifting of the veil, we have the ability to invent a new law for all of humanity that respects human dignity,” he said outside the courthouse.

If the judges rule in the plaintiffs' favor, Total would likely be ordered to publish a new vigilance plan. The judges could also order it to take urgent measures to prevent existing violations from continuing and new violations from occurring. They have until Jan. 30, 2020, to decide.

Sandra Cossart, director of the French NGO Sherpa, which helped conceptualize the duty of vigilance law and worked with legislators to introduce it, emphasized how much is riding on this case. 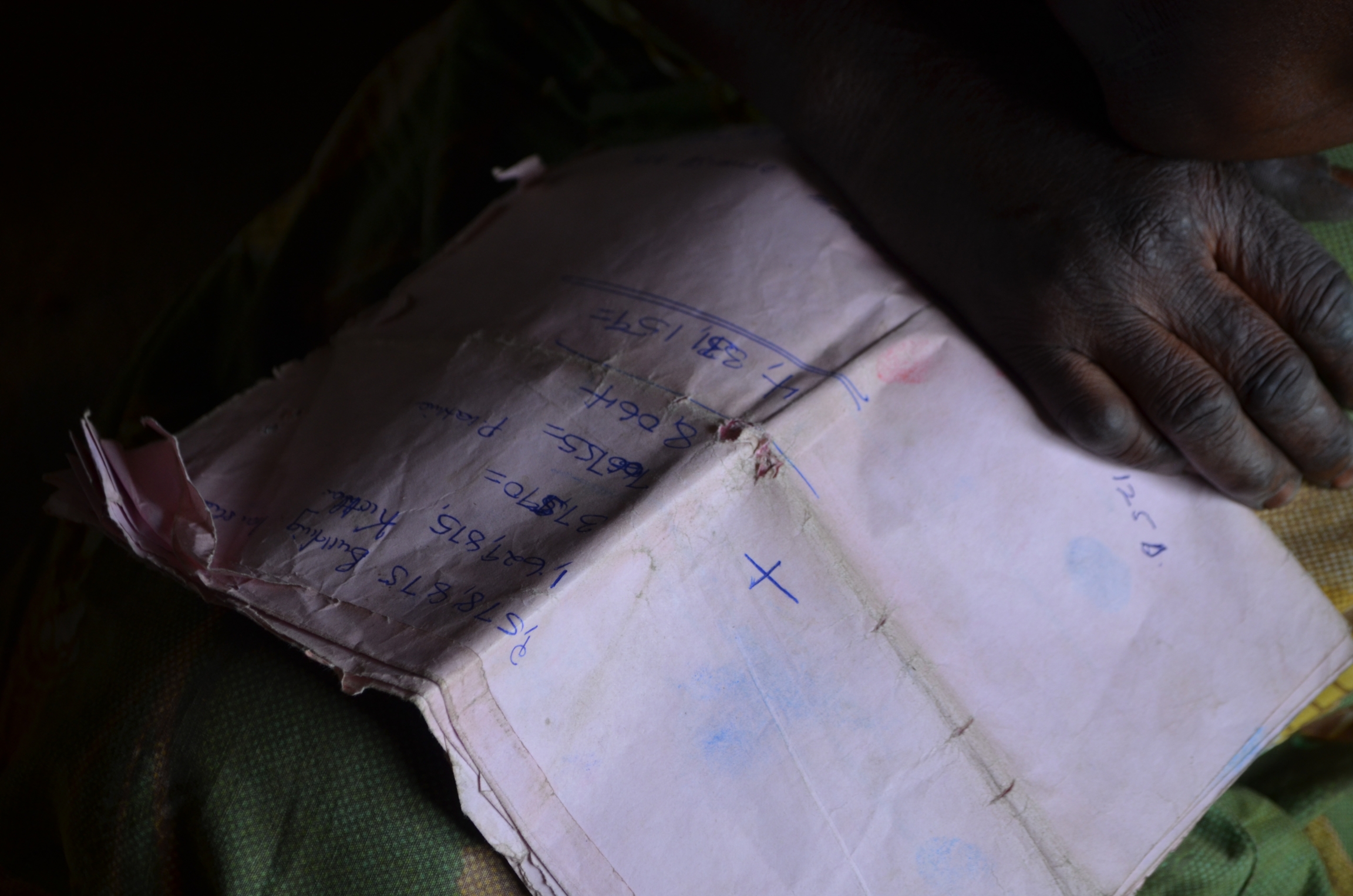 Margaret Asiimwe, one of the people forcibly relocated, holds a property evaluation written by Total's subcontractor, Atacama Consulting. She says her crops were undervalued.

“[The law] is quite fragile — at first, the government did not really want it," said Cossart, whose organization is not involved in the Total lawsuit. She said one of the people opposed to the legislation was French President Emmanuel Macron, who was then minister of finance.

There are currently four other cases that could result in duty of vigilance lawsuits, according to Cossart. She stressed how critical this first one would be in setting the tone and scope of the law.

“If you have one judge that decides, for example, that the case brought isn't clear enough ... that could set a precedent for the next judge,” she said.

Cossart said civil society groups pushing for similar legislation at the European and international levels — and business lobbies campaigning against it — will be watching the outcome of the French suit.

If it is successful, she said, “The impact would be huge.”