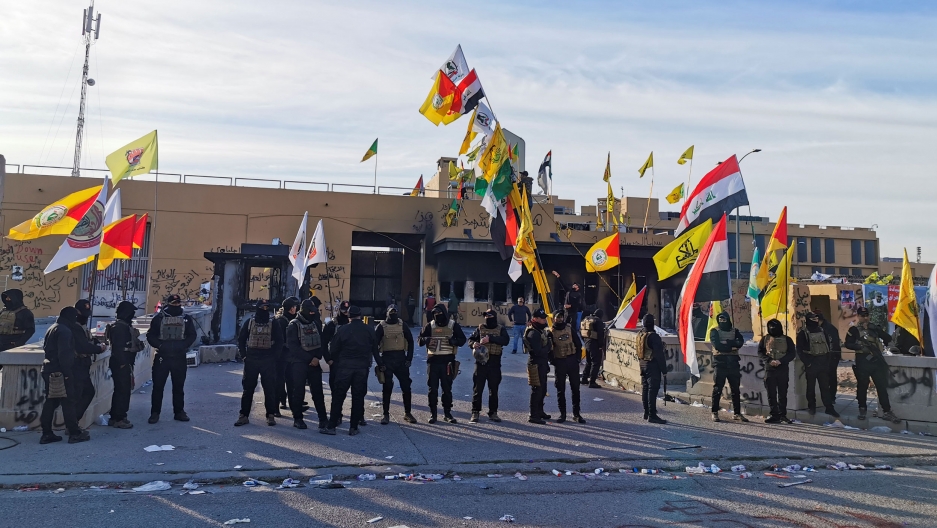 Members of Iraqi security forces stand guard as protesters and militia fighters condemn air strikes on bases belonging to Hashd al-Shaabi paramilitary forces, outside the main gate of the US Embassy in Baghdad, Iraq, Jan. 1, 2020.

Iran-backed paramilitary groups, who have been protesting for a second day at the US Embassy in Iraq, told their supporters to withdraw from the perimeter of the compound in Baghdad Wednesday.

The embassy's outer perimeter was stormed on Tuesday by demonstrators angry at US air strikes against an Iran-backed group that killed at least 25 fighters. On Wednesday demonstrators hurled rocks at the building while security forces fired tear gas and stun grenades in an attempt to disperse them.

The Popular Mobilization Forces (PMF) umbrella group of mainly Shiite militia said the crowds should withdraw now that their "message has been heard," and in deference to the Iraqi government which sought "to preserve the prestige of the state."

The protests mark a new turn in the shadow war between Washington and Tehran playing out across the Middle East, and raise questions over the continued US military presence in Iraq. US President Donald Trump, who faces re-election in 2020, threatened to retaliate against Iran but said later he did not want to go to war.

The United States launched deadly air strikes against bases of the Iran-backed militia Kataib Hezbollah Sunday in retaliation for missile attacks that killed a US contractor at a base in northern Iraq.

Crowds rallied Tuesday to protest, chanting death to America, setting fires, throwing rocks and smashing surveillance cameras. They breached an outer perimeter but did not enter the main compound. 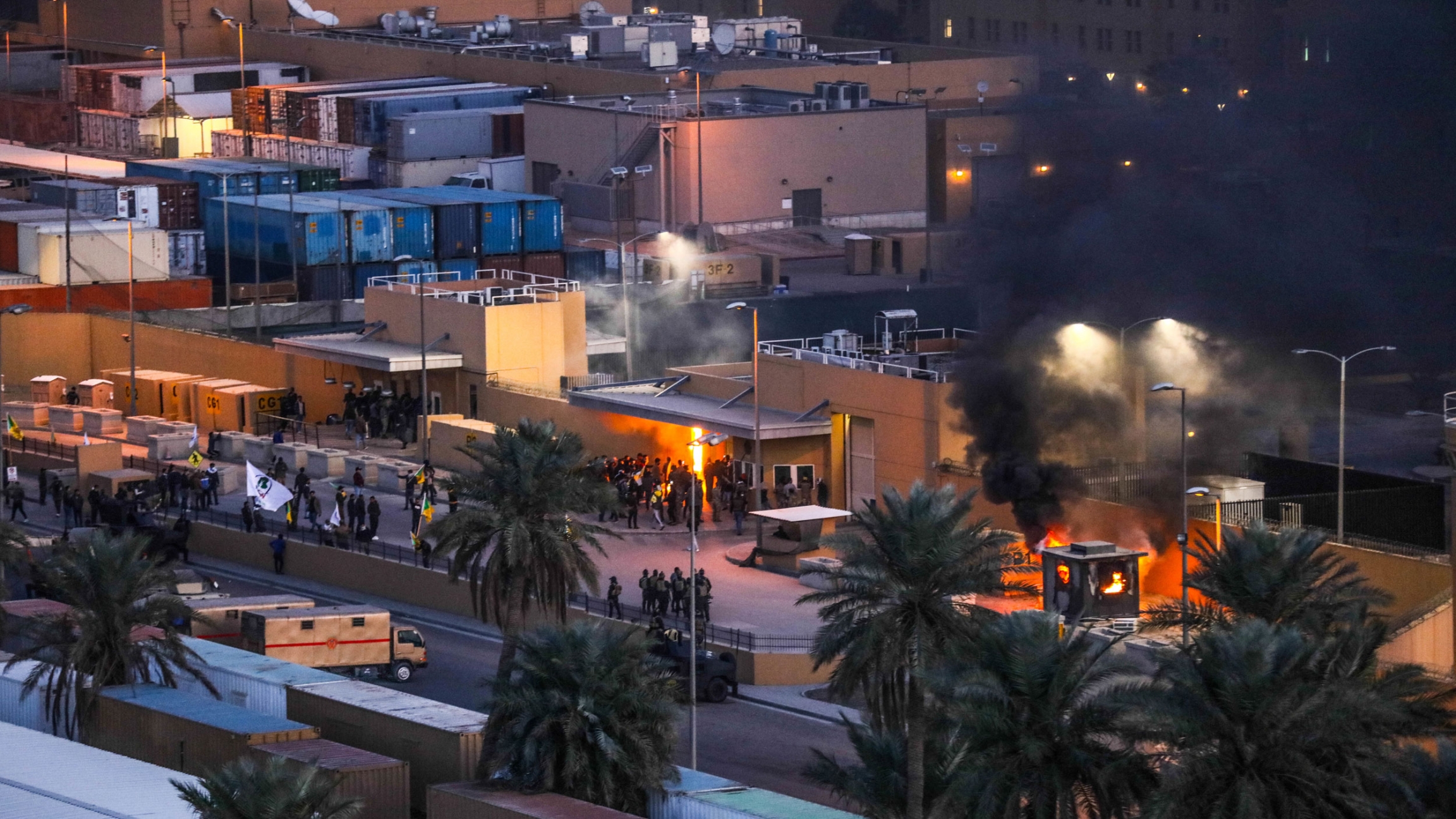 Protesters set fire to an entry control point at the US Embassy in Baghdad, Iraq, Dec. 31, 2019.

The huge embassy, built along the banks of the Tigris River in central Baghdad's fortified "green zone" during American occupation following the 2003 invasion that toppled Saddam Hussein, is the biggest US diplomatic mission in the world.

Washington says its diplomats are safe and it is rushing hundreds of extra troops to the region.

Overnight, demonstrators pitched tents and camped outside the embassy walls. On Wednesday morning, they were bringing in food supplies, cooking equipment and mattresses, suggesting plans to stay for a long time.

Senior Iraqi army officers had negotiated with those gathered outside the embassy in an attempt to convince them to leave. Washington is putting pressure on Iraqi leaders to ensure the security of its staff.

The anti-American action comes after months of protests in Iraq against the Iran-backed militias which support the government. Many Iraqis complain that their country has become a battlefield for a proxy war for influence between Washington and Tehran, and their leaders are too beholden to outside powers.

Iran's Supreme Leader Ayatollah Ali Khamenei on Wednesday condemned the US attacks. Iran summoned a Swiss envoy, who represents US interests in Tehran, to complain about what it described as "warmongering" words from Washington.

Trump accused Iran of orchestrating the violence at the US embassy and said Tehran would be held responsible.

More US troops were being sent to the embassy, US officials said. The 750 troops would initially be based out of Kuwait. The officials said that as many as 4,000 troops could be sent to the region in the coming days if needed.

More than 5,000 US troops are stationed in Iraq supporting local forces. The air strikes have galvanized calls inside Iraq to expel U.S. forces, not just from Iran-backed militias but also from their political rivals.