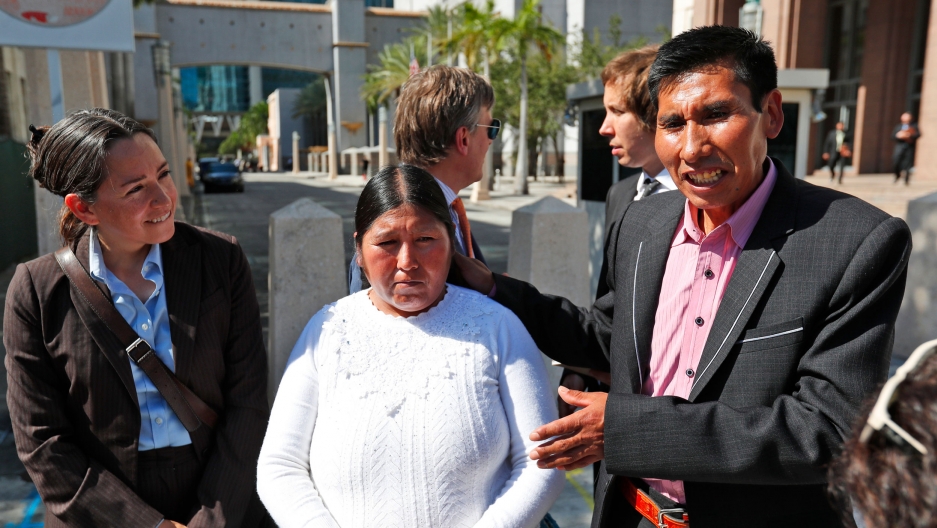 Eloy Rojas Mamani, right, gestures toward his wife Etelvina Ramos Mamani, as they speak during a news conference after leaving the 11th US Circuit Court of Appeals, in Miami, Nov. 19, 2019.

The night before she boarded a plane to the United States last month, Etelvina Ramos Mamani awoke from a terrible dream.

“I saw Marlene,” she said, referring to her 8-year-old daughter. The girl was killed more than a decade ago, on Sept. 20, 2003, by a single bullet through the chest. It had strayed through their bedroom window in their hometown, Warisata, a rural village in Bolivia’s highlands, north of the capital, and pierced the wall behind her.

This dream was difficult for her mother to talk about.

It’s these painful memories that prompted Etelvina and her husband, Eloy Rojas Mamani, to board a plane for Miami the next day. They were on their way to attend a court hearing — the latest chapter in their yearslong quest to seek justice for their daughter’s killing. Their lawyers were asking an appeals court to restore a landmark, $10 million jury verdict against Bolivia's former president and defense minister over killings that took place during a 2003 period of unrest known as the "October Massacre," part of Bolivia's "Gas War." A lower court judge has overturned last year's verdict, saying there was insufficient evidence to hold them liable.

But the Mamanis have promised they won’t give up.

Memories of the tragedy still consume them. Etelvina said her daughter was “muy cariñoso,” or affectionate, that she liked to read and was helpful around the house.

The couple, along with seven other Bolivian families, has waged a lengthy legal battle against Bolivia’s former leaders, ex-President Gonzalo Sánchez de Lozada and former defense minister Jose Carlos Sanchez Berzain, who are accused of planning and ordering security forces to use deadly military force against unarmed civilians, including Marlene. In total, security forces killed at least 58 people and injured more than 400, according to court documents — almost all of them from Indigenous communities.

More than 16 years later, tensions between Bolivia’s Indigenous groups and elite ruling class remain unresolved. The country was plunged into turmoil this fall during its presidential elections. Former Bolivian President Evo Morales, who was the country’s first Indigenous leader, was forced to resign and went into exile — first in Mexico, then in Argentina, where he was granted refugee status last week. Conservative interim President Jeanine Añez stepped into the void and shifted foreign and domestic policy to the right, ordering a crackdown on pro-Morales supporters during which at least 33 people have been killed. On Wednesday, Bolivian prosecutors issued an arrest warrant for Morales, accusing him of promoting violence.

Eloy said the traumas of the past are connected to the unrest of the present day.

Never could the couple have imagined their daughter’s case would take more than a decade of work. 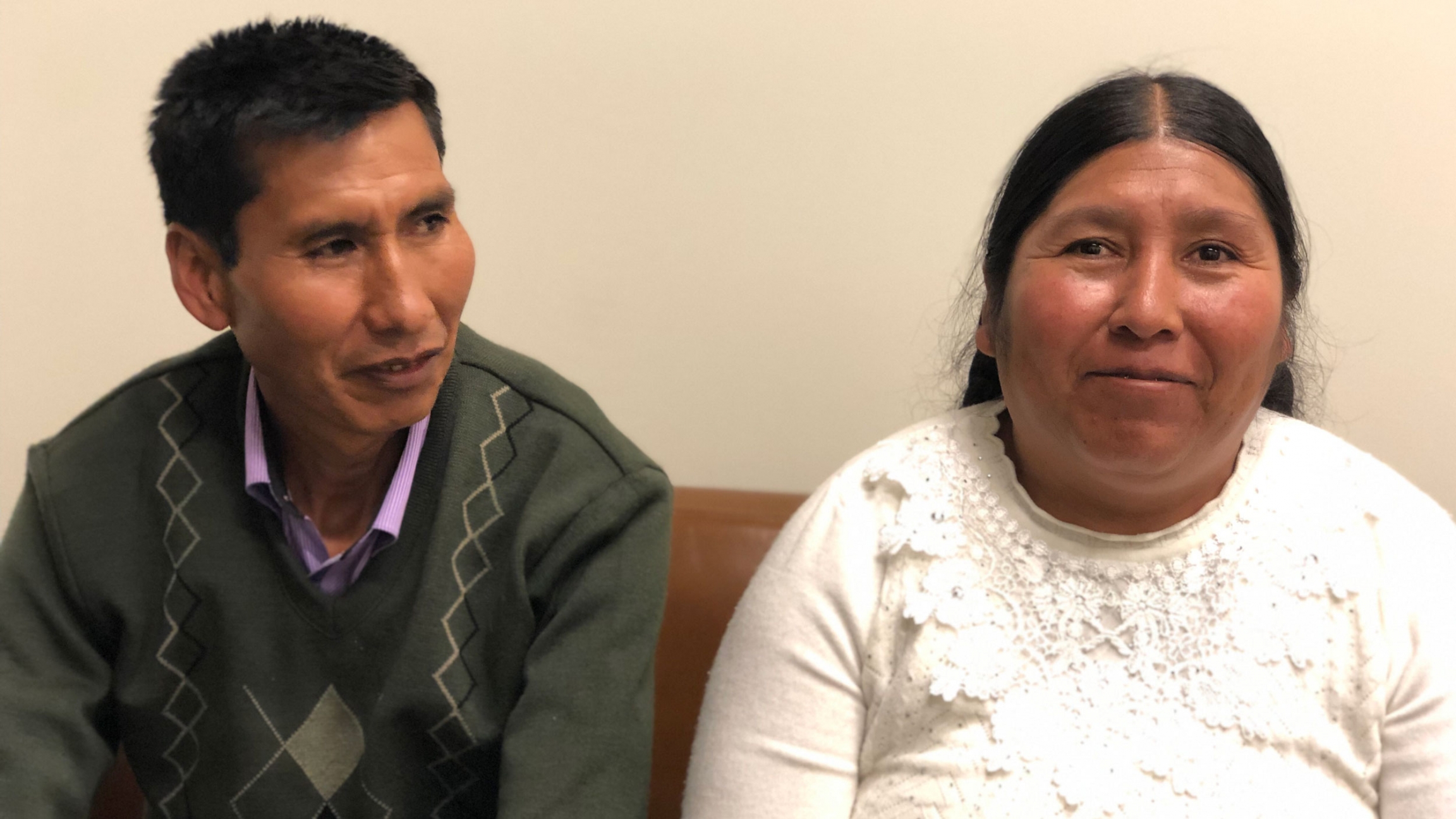 The long road to justice

The Mamanis' journey to the Miami courtroom began years ago, in the rural highlands where members of the Indigenous Aymara community live.

“[An] Aymara is a person who lives in the countryside, working in the field,” Eloy told The World.

Both husband and wife were orphans and married by age 20, starting a family of their own. Eloy said he dreamed of getting a degree to teach, but did not have the opportunity. The Aymara community lacked government representation for a very long time, too.

Then, in 2003, Bolivia was roiled by protests, strikes and roadblocks mounted in response to the government’s economic policies, especially a proposal to export natural gas that the protesters said exploited their natural resources. Then-President Sánchez de Lozada responded by deploying the military to the area where the protests took place, including in Warisata, where Eloy and Etelvina lived.

Eloy said he and others ran into the forest to hide, believing that men were being targeted.

In the end, government forces killed at least 58 throughout Bolivia during the crackdown, according to the plaintiffs’ lawyers in the US case. That included 8-year-old Marlene.

Etelvina said her daughter died in her arms. “It has left me traumatized,” she said.

After the deaths, Etelvina, Eloy and others in their town marched for three days, Eloy said, until they reached the presidential palace in Bolivia’s capital, La Paz, to call for Sánchez de Lozada's resignation.

Sánchez de Lozada and Sánchez Berzain were forced to resign and fled to the US, where they still live today. But the Bolivian government waived their immunity, which the US State Department accepted. It paved the way for the Mamanis to sue Sánchez de Lozada and Sánchez Berzain in the US under the Torture Victim Protection Act, a federal statute that allows crime victims to sue for extrajudicial killings that took place in their home countries.

The act has been used several times against government officials. But what makes the Mamanis’ case unique, according to their lawyers at Harvard Law School’s Human Rights Program, is that it involves a living former head of state, sitting in the same courtroom with his accusers.

The long road to justice

First filed in 2007, the lawsuit has been long and messy, full of motions to dismiss, appeals and delays.

Closure for the Mamanis appeared within reach last year, when a jury unanimously voted in their favor. A judge overturned the decision. So the Mamanis appealed, bringing them and the former leaders to the 11th circuit court of appeals in Miami, Florida, last month.

Dressed in suits and ties, the Mamanis entered the Miami court on Nov. 19, in traditional Aymara clothing. Etelvina wore a colorful pollera, or skirt.

James Tysse, a pro bono lawyer for the Mamanis, argued before the three-judge panel that the ex-president and defense minister ordered the shooting of the civilians.

Stephen Raber, the defense lawyer, told The World there is “no evidence” his clients could be held responsible under the Torture Victim Protection Act.

“The facts alleged in the original complaint did not meet the test for extrajudicial killing,” he told the judges.

Raber argued the killings happened during a chaotic time in Bolivia, which the president and his defense minister were trying to manage and keep secure.

“It’s just obvious that all of us are going to have to read the record with a fine-toothed comb because you’re in total disagreement on the facts,” Judge Gerald Bard Tjoflat said.

The hearing lasted less than an hour. The parties now await the judges' ruling.

Eloy and Etelvina now wait in Bolivia, returning to a country that once again is in turmoil.

At least 33 people were killed since the Oct. 20 election, and last month, the head of the Inter-American Commission on Human Rights recommended the country bring in outside investigators to assess human rights violations.

Meanwhile, Eloy said he and Etelvina would keep pursuing their daughter’s case to the end.

Justice, he said, means breaking the vicious cycle of governments killing its own civilians, and sending a message around the world that it won’t be tolerated.