Fujiko Urdininea was 8 when Evo Morales first became president of Bolivia. Now 21, she is one of the thousands of young people taking to the streets of the nation’s capital each day to seek his removal.

“A good leader knows when it’s time to leave. We are tired of the manipulation and the lies of this government. And we deserve the chance to see other forms of organizing society.”

“A good leader knows when it’s time to leave,” Urdininea said on Saturday as she helped organize a roadblock in the capital city of La Paz. “We are tired of the manipulation and the lies of this government. And we deserve the chance to see other forms of organizing society.”

Evo Morales is Bolivia’s first Indigenous president. And last week, he won a fourth consecutive term in an election that has unleashed large protests in Bolivia and led to accusations that Morales is trying to turn the landlocked country into an authoritarian state where only one candidate can ever win a presidential election.

The official election results gave Morales 47% of the vote compared to 36.5% for his main rival, Carlos Mesa. The 10.5% difference was just large enough to avoid a runoff election between the top two candidates, according to Bolivia’s constitution, which says that the winning candidate needs to have 40% of the vote, and a 10-point lead over the closest rival.

But Morales’ opponents say the vote was rigged by an electoral tribunal that was selected by his party members, and have not recognized the result. Following the election, strikes broke out in several provincial capitals. And thousands of young people have been marching in La Paz each night to protest the result.

Morales says his victory was clean, and he has invited international organizations and delegates of foreign governments to audit the vote tally. But that has not quelled the anger and frustration on the streets. Political parties and civil society groups promised to intensify protests this week. On Monday, a strike began in Bolivia’s capital city, where protesters are also blocking numerous roads across the city each day to show their discontent. Dozens of people have already been injured amid clashes between opposition supporters, police and Morales supporters in roadblocks across the country. 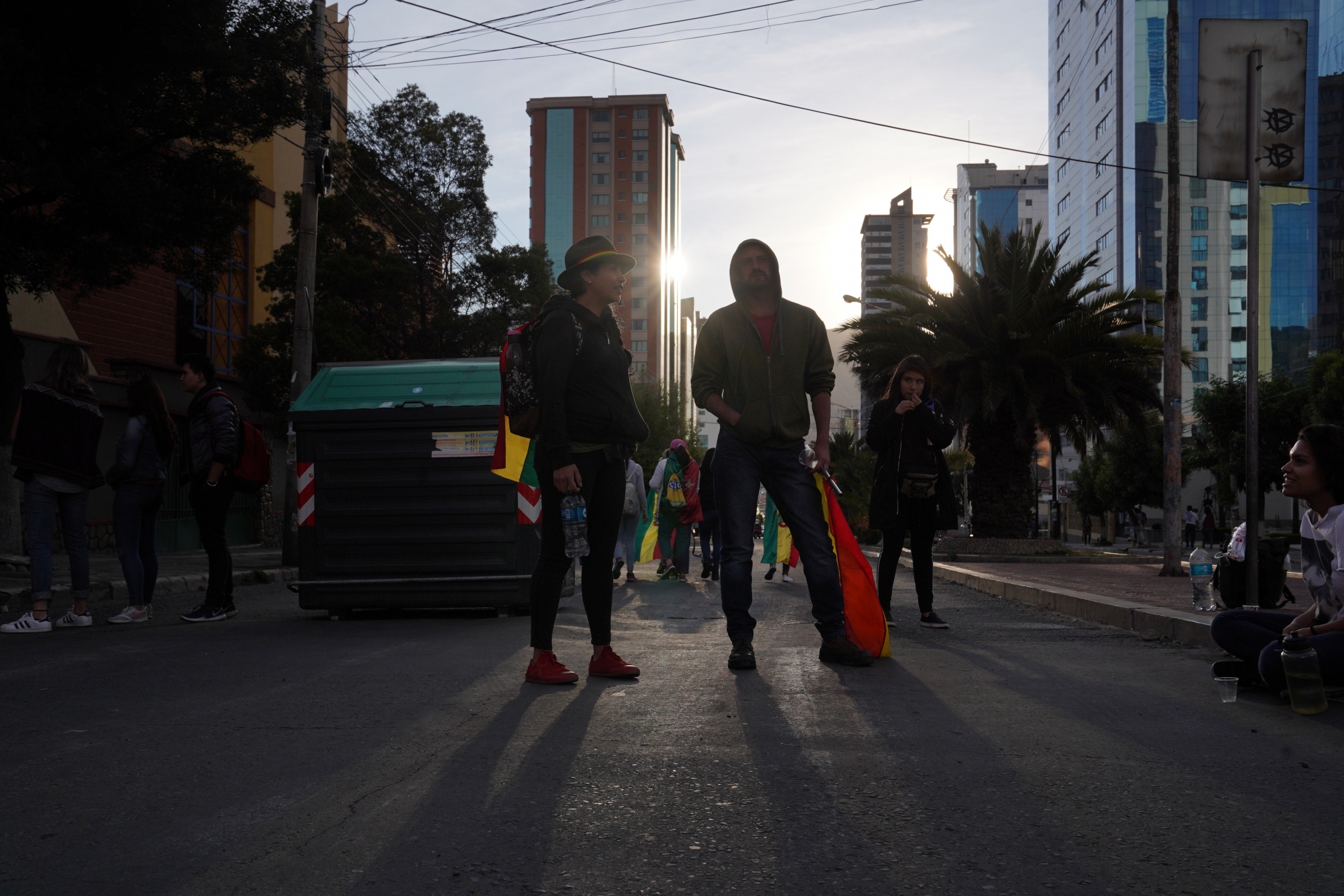 A group of young men blocks a road in Bolivia's capital city to protest the reelection of Bolivian President Evo Morales to his fourth term. Protesters claim he is leading Bolivia toward dictatorship.

“This is not about the left versus the right, or about whites against Indians,” said Waldo Albarracín, a public university rector who once backed Morales, at a recent opposition gathering. “This is about living in [a] democracy or living in [a] dictatorship.”

Related: Women are making Bolivia a destination for foodies

Much of the discontent in Bolivia harks back to a 2016 referendum in which voters were asked if they would agree to amend the country’s constitution so that Morales could run for a fourth term in office. Although 51% percent of the population said no to the proposal, the following year, Morales appealed the decision in Bolivia’s constitutional court and got a ruling that said his “political rights” would be violated if he were not allowed to run.

Bolivia’s opposition protested, but it eventually accepted the ruling and agreed to participate in elections this year. On Oct. 20, as the first quick count of votes was released by Bolivia’s electoral tribunal, it looked like Morales would be forced into a runoff with the main opposition candidate, Mesa, as the difference between them was just 7%. But inexplicably, the quick count stopped after 89% of votes had been counted. It was only resumed 20 hours later. When the new results were published, 95% of votes had been tallied and Morales’ lead jumped to 10% — the amount he required to avoid a runoff. 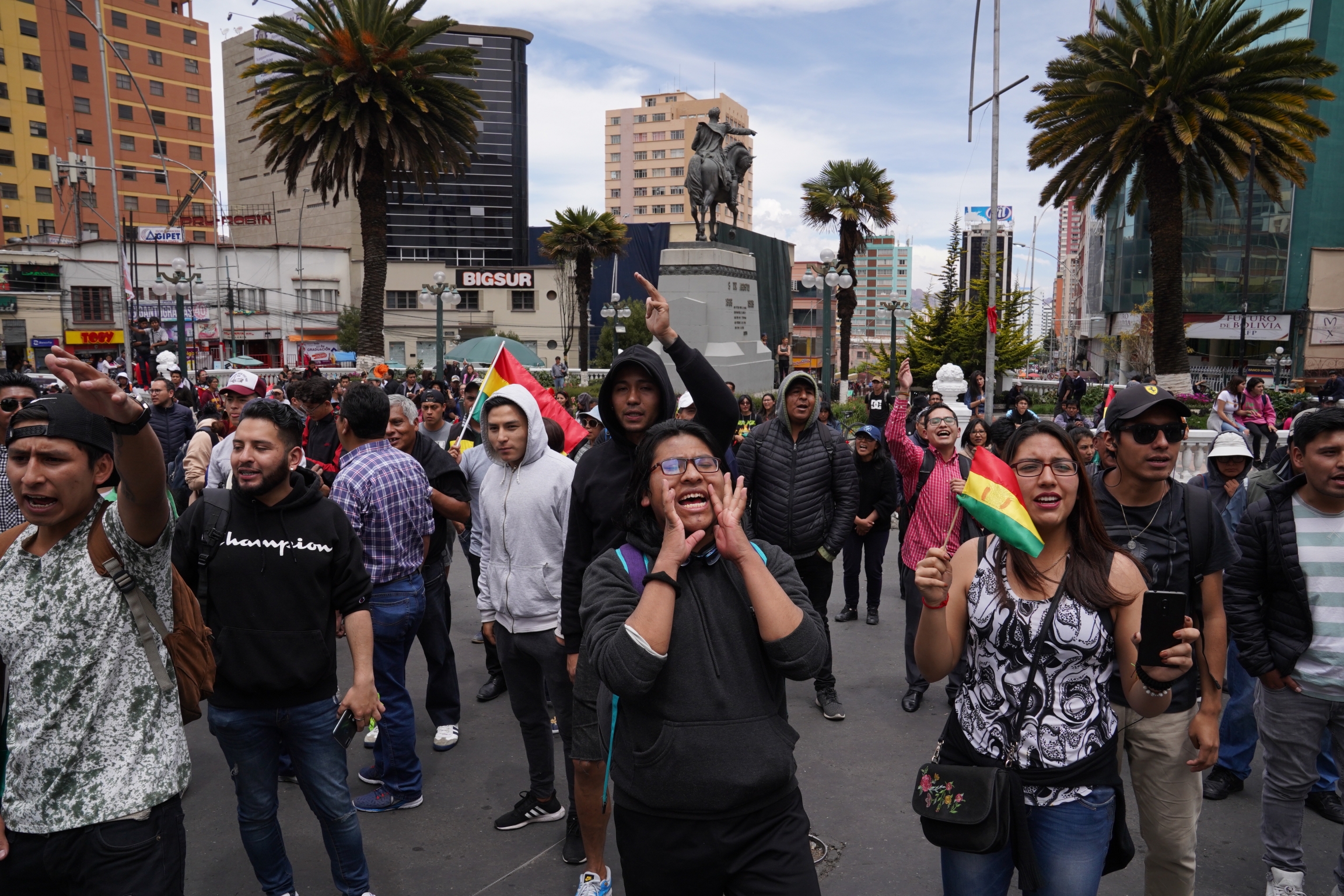 Morales said that his lead expanded thanks to votes coming in from rural areas, which are mostly Indigenous and where he enjoys strong support thanks to social policies that include subsidies for the elderly and for pregnant women. But electoral experts have cast doubts on whether his lead could have grown so much between both counts. The vice president of the electoral tribunal resigned following the election over the lack of transparency with the publication of results.

“What has happened is very suspicious.”

“What has happened is very suspicious,” said Juan Carlos Nuñez, the director of the Jubileo Foundation, a Bolivian think tank that monitored the election. The foundation is backed by the Catholic Church. With the help of 1,000 volunteers, Jubileo counted votes at 1,500 tables across the country, which were selected through sampling techniques. It found a difference of just 5.5% between the leading candidates.

Related: Casting aside imposing summits, these women are scaling Bolivia's peaks in their traditional 'cholita' clothing

Nuñez said that Morales’ explanation for the last-minute spike in his lead is “just rhetoric” because, in Bolivia, rural areas sometimes send their voting results to the central hub hours before urban areas. “Their voting centers have less people, so in some cases, they count votes faster,” he explained. 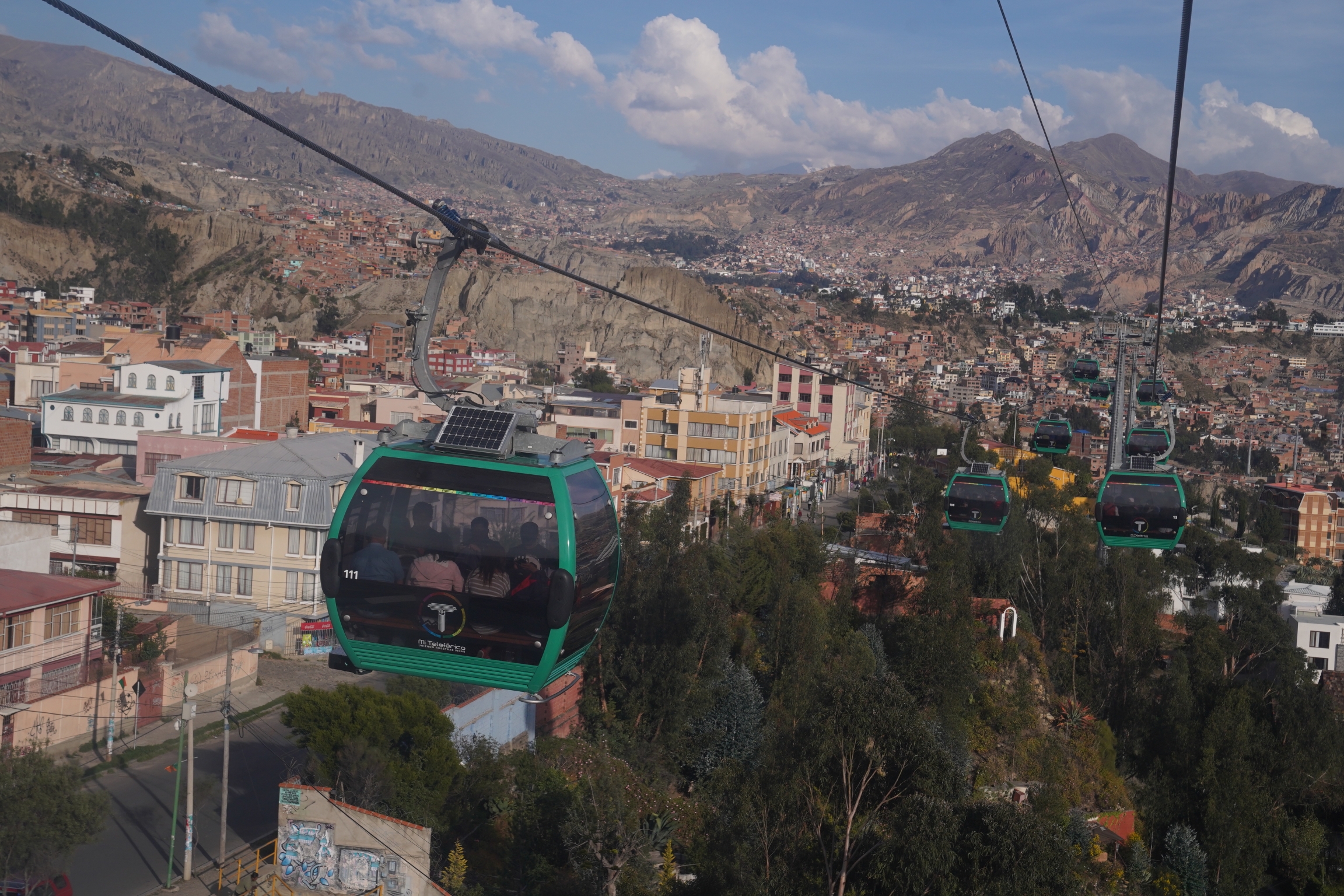 Evo Morales has won the support of many Bolivians by investing into public infrastructure projects like this cable car system that connects the capital city. Early in his tenure, he renegotiated contracts with gas and mining companies to bring more money into state coffers.

His foundation has been at odds with the Morales administration for months. In September and October, the electoral tribunal banned news media from publishing two Jubileo polls that showed the difference between Mesa and Morales was narrowing and also below the crucial, 10-point margin. The tribunal said that Jubileo had used funding from international organizations to conduct its survey, going against Bolivian law. But it allowed newspapers to publish polls by other companies that used international financing. Those polls gave Morales better results.

Raúl Peñaranda, the director of local news site Brujula Digital, says that while Bolivians still enjoy rights like the freedom of assembly and the right to protest, the country’s democracy is becoming increasingly limited.

A key factor, he says, are constitutional changes introduced by Morales early in his tenure, which gives congress the power to nominate judges for key positions. Morales has held large majorities in congress since he first became president 13 years ago, and that has enabled him to stack the country’s most important courts with magistrates that support his cause, Peñaranda explains. This includes the constitutional court that greenlighted his run for a fourth term in office.

Morales has also won the support of many Bolivians by renegotiating contracts with gas and mining companies that produce most of the country’s revenues. More money has been entering state coffers since the Indigenous president was elected, and it has been redistributed to the poorest Bolivians in the form of subsidies. 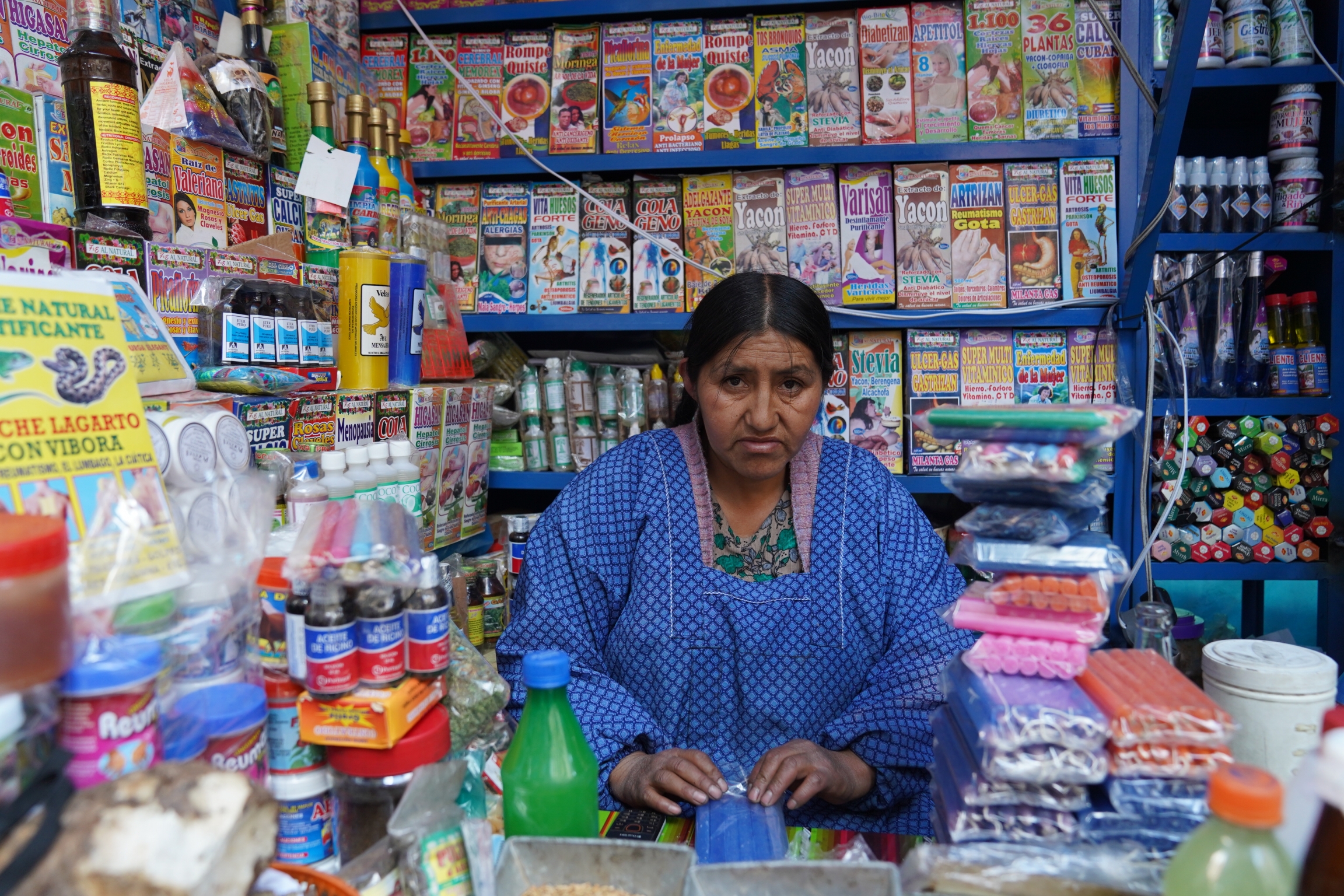 Maria Achu, a traditional medicine merchant, says that she still supports Evo Morales because he has improved the situation of Indigenous people like herself. Her family has benefited from government subsidies.

But as global gas prices fall and state revenues dry up, Morales’ popularity is also declining. And Morales, who is now the hemisphere’s longest-serving head of state, faces a turbulent future as protests over his reelection escalate.

“He might survive the protests and stay in power for five more years. But he will be in a weaker position and could start to take more authoritarian measures.”

“He might survive the protests and stay in power for five more years,” Peñaranda said. “But he will be in a weaker position and could start to take more authoritarian measures.”

For the protesters taking to the streets of Bolivia each day, this is a crucial moment. They believe that if Morales is able to secure his fourth term, he could end up becoming president for life.

“We don’t want to go back to dictatorship,” said Fabiana Gallardo, a 42-year-old who remembers living through the military juntas that ruled Bolivia in the early 1980s. “We have gone through that, and we know it doesn’t do anything good for anyone.”