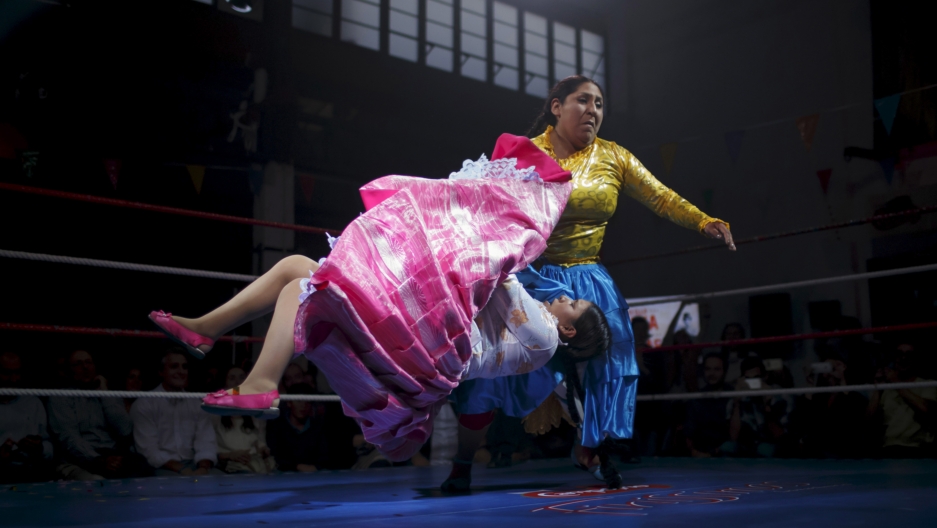 Though wrestling is widely regarded as the world’s oldest sport, women have only recently gained a foothold.

And even then, they’ve done so while facing tremendous discrimination and resistance from organizers, other wrestlers and fans.

This is certainly true in competitive Olympic forms of wrestling. But it’s also been the case for more spectacular forms of wrestling entertainment, where women have long been relegated to the roles of managers or girlfriends. When they do actually wrestle, they’re often sexualized.

Yet these women are nonetheless making advances. World Wrestling Entertainment’s most recent Wrestlemania featured the first ever women’s main event. And in the world of Bolivian wrestling, women have also made big strides. In fact, many Bolivian women wrestlers now have achieved far more popularity than their male counterparts.

As an anthropologist of gender in Latin America, I actually trained and performed alongside these wrestlers while conducting ethnographic research.

These women have not gained respect easily: They have met resistance and sexism at every turn. However, their stories not only pay tribute to Bolivia’s past, but may foretell a more egalitarian future in the world of wrestling. 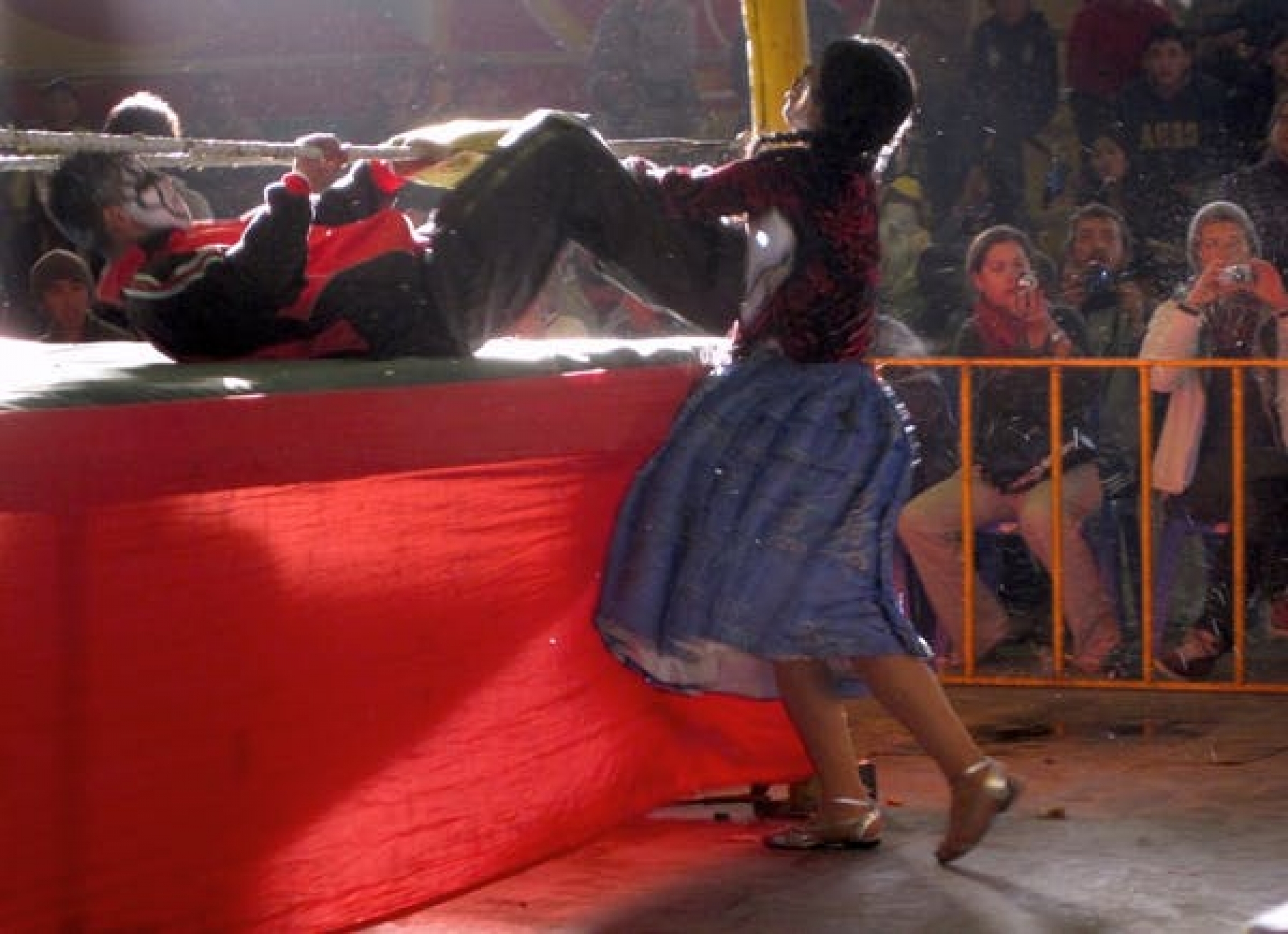 Women have become a force in Bolivian wrestling.

The scale and production level of Bolivian lucha libre are certainly not on par with World Wrestling Entertainment, but the conventions are the same. This form of wrestling is less about the competition and more about the theater.

Just like in the US, promoters, wrestlers and others with a stake in the business at times decide beforehand who will win the match in order to further developing storylines. To this end, referees don’t always enforce the rules. The wrestlers aren’t just grappling. They’re performing as characters.

In the 1960s, Mexican wrestlers toured South America, and while there, trained a number of Bolivian men. Early wrestlers like Médico Loco, Mr. Atlas and Diablo Rojo helped build the tradition in Bolivia, which waxed and waned in popularity for four decades.

But beginning in 2001, Bolivian women started appearing in the ring.

These women wrestlers began calling themselves “cholitas luchadoras,” or fighting cholitas. They take their name from the “chola” of the Andes, women who have historically worked in markets — though not all of them do — and have earned reputations for being aggressive negotiators, strong advocates for workers’ and women’s rights. At the same time, they’re romantically evoked as national icons.

The combination of this character type with the spectacular physicality of lucha libre has made them popular with both local and foreign audiences.

Some represent morally corrupt characters: “rudas,” or the equivalent of heels in English. They’ll sometimes shake a 2-liter soda bottle and spray its contents into the audience. Others will simply sneer and hurl insults at the crowd.

On the other hand, the good ones — called “técnicas” — will stand with a microphone in the ring and declare their loyalty to “the people” and promise to fight for their honor.

Once the match begins, the luchadoras often incorporate humor, pulling each others’ braids, or even ripping off the spandex pants of a male opponent to reveal hot pink boxer briefs. At times they pull audience members up to dance with them, or will lean in to kiss the cheek of a young man in the crowd. 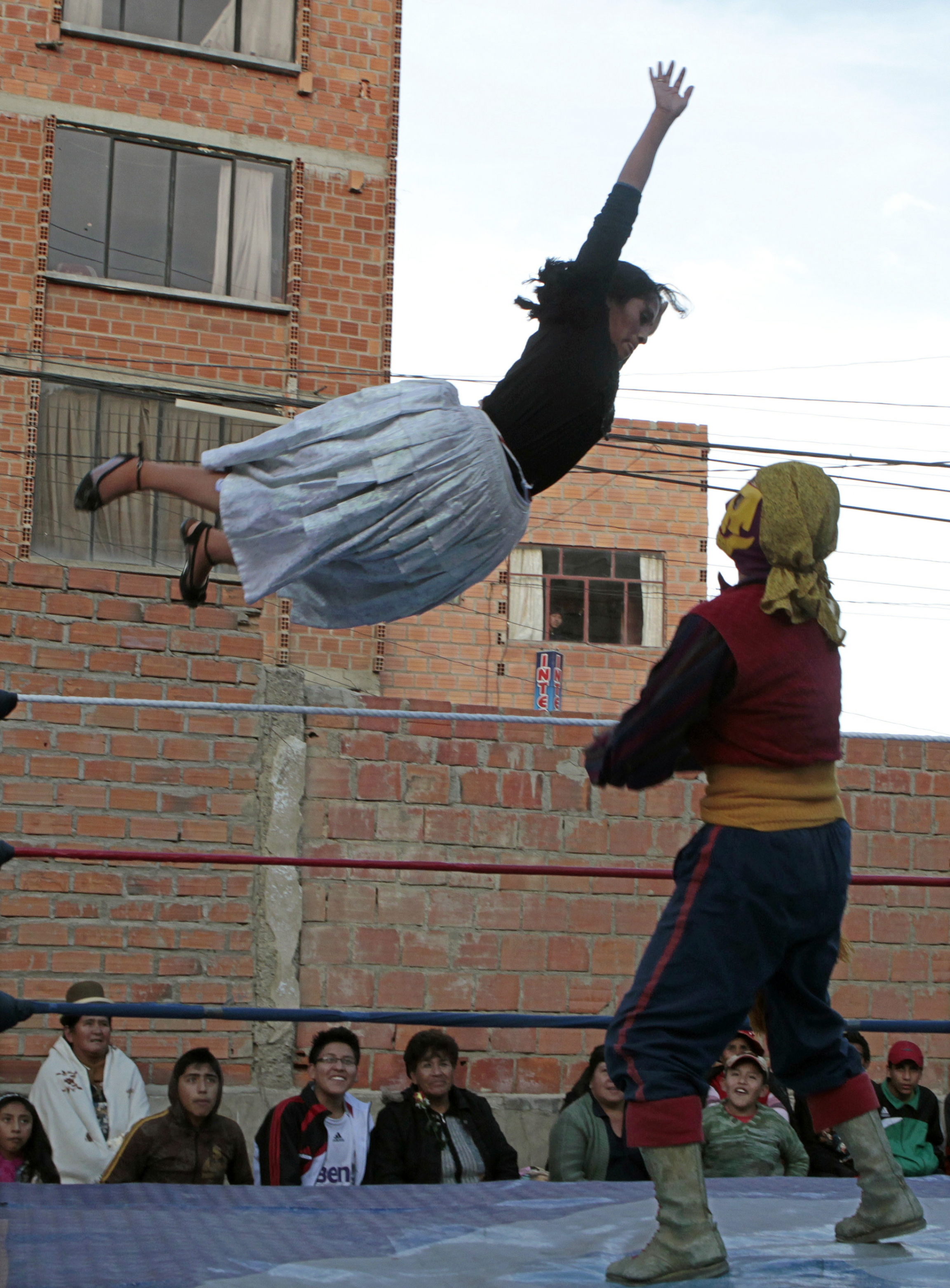 Bolivian Aymara Indian wrestler Benita (L), nicknamed "The Untouchable," jumps at "The Bucanero" during a wrestling bout in a popular sports gym in La Paz, May 23, 2010. To the horror of Bolivian machos, the elegant "cholitas," or Andean mestiza women whom are one of the country's best-known icons, have made a successful incursion into the wrestling ring. The cholitas fight other women and men in the ring as equals.

But perhaps their most eye-catching quality is the pollera skirt, a knee-length garment made by extensive pleating of sparkling fabric and further puffed by multiple petticoats beneath.

As they enter the ring to local cumbia music, they’ll swirl these layered skirts. As they flip from the ropes or throw an opponent to the ground, the polleras will billow in the air.

After a few years of wrestling, international journalists began to take notice. Outlets like National Geographic, BBC and The New York Times have published articles about the luchadoras. They even appeared as a “challenge” for competitors on “The Amazing Race.”

Each of the stories plays up the novelty of women wrestling in these “traditional” skirts. And it doesn’t hurt that the colorful pollera makes for a good cover photo.

But much of the media coverage fails to acknowledge the continued struggles the women face. They often find themselves demeaned by other Bolivian wrestlers and spectators, who sneer at their gender, race and performance styles.

‘All show, no ability’

As I wrestled alongside both men and women in La Paz, I heard trainers, current wrestlers and even the retired luchadores of the country disparage the women for relying too heavily on the chola character — which they derided as a “gimmick” — rather than on their craft as wrestlers.

Many of the men involved in wrestling have said that the women have degraded the skill level of the sport. Others called them “payasas” — clowns — or said that they were “all show, no ability,” even as they urged male wrestlers to incorporate more elements of spectacle into their performance.

The cholitas luchadoras have also been criticized by a number of Bolivians as a kind of racist performance. They suggest the characters are offensive to the image of the chola, Bolivia’s Indigenous women, and Bolivians as a whole.

Related: An American tradition took shape in Mexico — and then returned to the US

While some of these critiques may be valid, at times they are leveled by the same promoters who fill their events with male luchadores whose gimmicky personas often involve little technical ability. These men perform as stiff mummies who simply bulldoze their way across the ring, or clowns who spend more time popping balloons than grappling with opponents.

The luchadoras, many of whom identify as Indigenous, counter that they are using their popularity as a springboard for highlighting the roles that Indigenous women may play in society. They say they are attempting to act as role models providing young Indigenous women with positive representations in the public sphere.

So while the luchadoras are bringing progress, critiques of them show that the more popular they become, the more backlash they have to contend with. But women’s acceptance in sports is not only an issue in Bolivia.

Even in the United States, women fight to be taken seriously in areas related to sports and entertainment. By understanding how these stories are linked, observers can understand the widespread difficulties women face when navigating power structures in sports that continue to be largely made up of men.

Nell Haynes is an assistant teaching professor at Georgetown University.