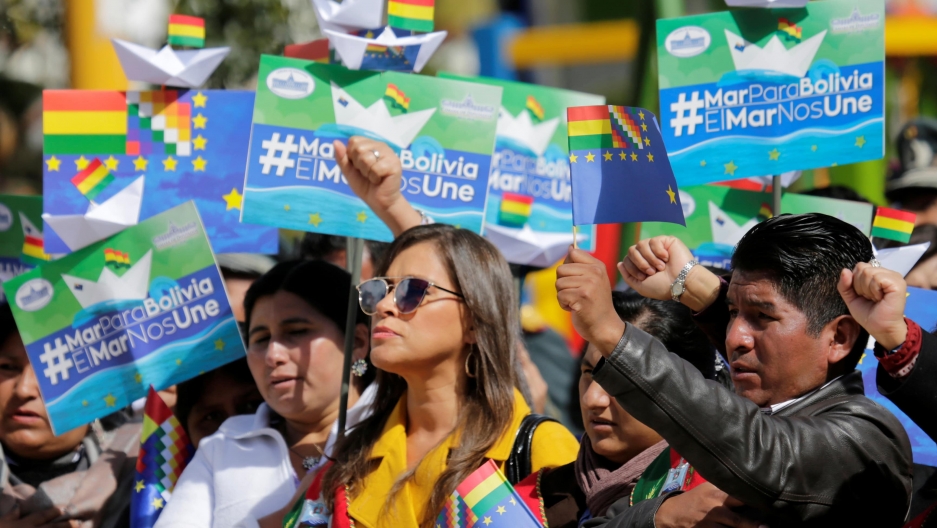 Local authorities take part in the events commemorating the "Día del Mar," or "Day of the Sea," which refers to the day on which Bolivia lost its access to the sea to Chile during the 1879-1883 War of the Pacific, in La Paz, Bolivia, March 23, 2017. The banners read "Sea for Bolivia, Sea unites us."

This year marks the 140th year that “Día Del Mar” or "National Day of the Sea" is celebrated in Bolivia.

Yes, Bolivia is one of two landlocked countries in South America, but every year on March 23, this holiday remembers the “historical injustice” of the 250-mile Pacific coast that Bolivia lost to Chile in the War of the Pacific. It’s a day where the whole country rallies together to remember its determination to reclaim access to the Pacific Ocean once again.

Related: Women are making Bolivia a destination for foodies

To understand the origins of the holiday, it’s important to note the complex history of the coast. The 250 mile-coast along the Pacific was a great economic advantage for Bolivia since it possessed the natural resources of saltpeter and guano, a source of nitrates used in explosives and fertilizers until the early 1900s. However, the country’s sights were set on the mining business as its sole means of economic growth before the war. 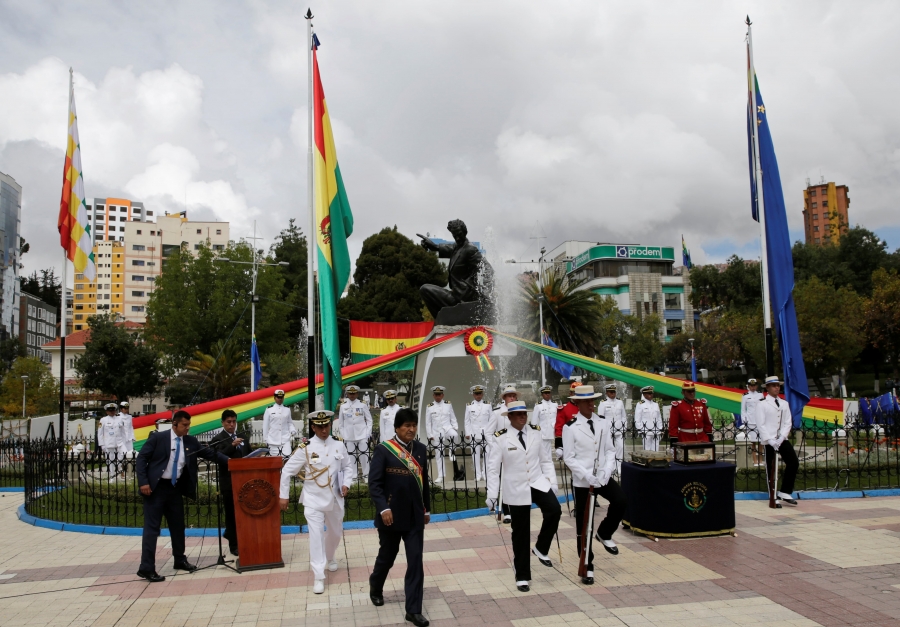 In fact, Rafael Puentes, the author of "Recuperando la Memoria: Una Historia Crítica de Bolivia," explains that the birth of the country itself is credited to the tremendous mining wealth found in Potosí, Bolivia.

“I don’t know of any other country that owes its existence to mining. It’s another thing that there are many countries with mining riches, but Bolivia exists because of mining,” Puentes said. “In summary, it can be said that one of the fundamental misfortunes of our birth itself as a country is essentially the lack of regard for other types of economic activities that can be profitable but are inevitably slow. Mining is a fast business.”

The wealth available along the coast was ignored by Bolivian governments and society. There were no roads built connecting Bolivian territory found on either side of the Andes. According to Puentes, 90 percent of the population in the port city of Antofagasta was Chilean.

When Bolivia raised the taxes by 10 cents on a Chilean-British company based on the coast, a dispute arose. Shortly after, the Chileans, backed by the British, invaded the port city of Antofagasta. Unfortunately, Bolivia had no military presence at the coast.

One month after the invasion, the March 14, 1879 front page of Bolivian newspaper El Comercio read: “Mejillones and Caracoles [two Bolivian cities] under the power of the invader. We denounce the cowardly crime before the world. Bolivia accepts the war without provoking it. All the people alongside the Government will defend the Homeland."

The same sentiment rings across the country 140 years later, every March 23. 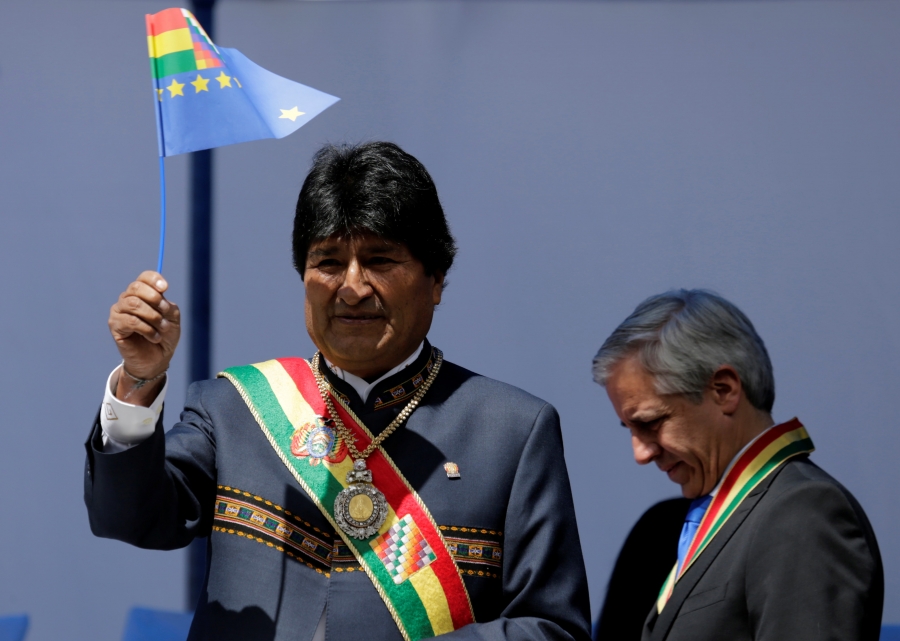 The date was chosen in honor of the war hero Eduardo Abaroa, who was shot and killed by the Chileans in the Battle of Calama (also called the Battle of Topáter), the first battle in the War of the Pacific. His descendants, such as Nancy Aneiba Abaroa, continue to honor his efforts and share his story.

"My mother always said, 'We remember our great grandfather as the most patriotic man, as the most civic man, because he has had such a strong contribution to the nation,'" Aneiba Abaroa told The World. "He is truly a milestone in our nation's history. And the generations to come will remember it.”

On Día del Mar, the city of Cochabamba shut down streets for the parade that concludes in the plaza of Eduardo Abaroa. Bolivia's different military institutions participate in the parade — including its navy, La Armada Boliviana, which still exists even without a coastline. Bolivians sing the "Anthem of the Sea:" “Antofagasta, beautiful land, Tocopilla, Mejillones, by the sea / With Cobija and Calama, they will return to the homeland again.” The song lists the names of cities along the coast that Bolivia hopes will one day be Bolivian again.

In 2013, Bolivian president Evo Morales filed an official plea before the International Court of Justice in the Hague against Chile. The suit was partially framed as an economic matter and demanded that Chile negotiate and return sovereign access to the Pacific Ocean. 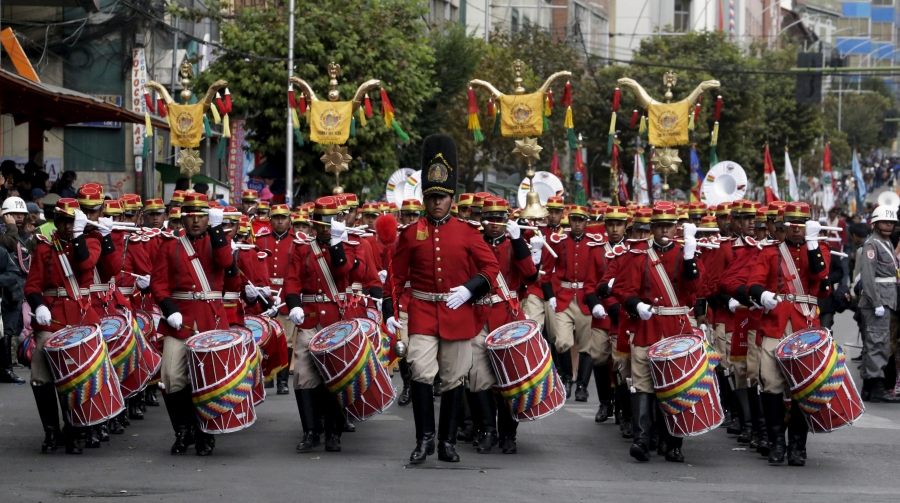 According to Bolivia's former president Eduardo Rodríguez Veltze, the country's annual GDP growth would be 20 percent higher if it obtained access to international waters once again.

Juan Carlos Abaroa Leigue, another descendant of Eduardo Abaroa, believes the primary need for access to the Pacific is specifically for economic growth.

To Bolivia's disappointment, judges at The Hague announced on Oct. 1, 2018  that Chile cannot be forced into negotiation with Bolivia.

“This what has happened to us [in the ICJ], it’s a new loss,"  Abaroa Leigue said. "We have to continue persisting and fighting for there to really be a world voice that says ‘you need access once again, for your children, for this nation to be great.'”

But it seems that Día del Mar will be celebrated this year with the same passion as always, and for many years to come.

“Although the ICJ has presented its results, and that today that Bolivians feel a little disappointed, apathetic, or unsure of not having it. We were born with sea, and we will have it once again,” Aneiba Abaroa said.