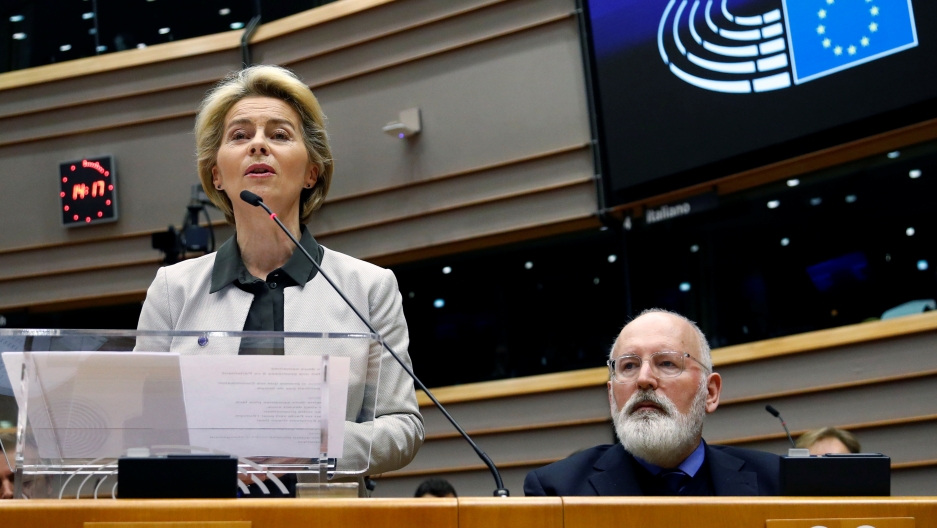 Perhaps the most important event at the UN climate negotiations in Madrid on Wednesday actually happened 800 miles away in Brussels, the seat of the European Union.

That’s where the new head of the European Commission, Ursula von der Leyen, unveiled the European Green Deal, a proposal to overhaul the continent’s economy with the goal of becoming completely carbon-neutral by 2050.

“Our goal is to reconcile the economy with our planet. ... This is Europe’s man-on-the-moon moment.”

“Our goal is to reconcile the economy with our planet,” von der Leyen told reporters. “This is Europe’s man-on-the-moon moment.”

The plan would combine ambitious climate targets with $111 billion in funding for regions and industries particularly affected by the transition away from fossil fuels, touching just about every aspect of the European economy along the way.

But in the sprawling conference center in Madrid, where negotiators are hammering out the next steps in the Paris climate accord, the proposal also carried a different significance: It was a sign that the EU might give international climate talks a much-needed jolt of energy as they head toward a critical deadline in 2020.

Related: 4 things to watch at the climate talks in Madrid

When it comes to international climate negotiations, one date is key: November 2020. That’s when countries are expected to submit new targets under the Paris agreement, committing to deeper, faster cuts in greenhouse gas emissions.

With the US stepping back from international climate negotiations, many at the conference hope that the EU will take the lead — and perhaps partner with China, the world's largest carbon emitter. Advocates say an EU-China announcement ahead of the 2020 deadline — perhaps at an EU-China summit currently scheduled for next September — could trigger a new set of commitments.

“We really need the EU to step up, and to step up now,” said Lola Vallejo, the climate program director at the Paris-based think tank IDDRI.

European heads of state will vote this week on whether to formally approve the European Green Deal’s target of carbon-neutrality by 2050. They’ve tried twice before and failed — blocked by some of the EU’s more coal-dependent eastern countries, including Hungary and Poland.

This time, advocates say the move is crucial to send a signal that the EU is stepping into the leadership void left when the Trump administration announced plans to pull out of the Paris agreement.

“The EU, in the current context, is seen as the last leader standing,” Vallejo said.

Under the agreement, nations have committed to keeping global warming below 2 degrees Celsius — or 3.6 degrees Fahrenheit — above pre-industrial levels. Scientists say a safer target is 1.5 C.

As of now, national commitments aren’t sufficient to meet those goals. Current pledges would lead to estimated warming of more than three degrees Celsius, and many nations, including the US, are not on track to meet those commitments.

The United Nations has asked nations to significantly increase their targets in 2020. So far, none of the world’s biggest emitters have made new pledges.

But advocates hope that will change, and they’re looking at the EU to lead the way, along with the world’s largest emitter: China.

In the halls of the conference in Madrid, many people are looking to recent history as a model. Back in 2014, under the Obama administration, the US and China struck a deal and together announced plans to reduce their greenhouse gas emissions.

That announcement was seen as critical to paving the way for the Paris agreement.

“It’s hard to know if Paris would have happened without it ... but I do think it was highly significant,” said Sue Biniaz, who worked on the deal as the State Department’s main climate lawyer.

Biniaz says the US-China agreement was especially powerful because the two countries had historically been at odds in international climate negotiations. The fact that they came together made other countries believe a deal in Paris was possible.

The agreement, together with a lot of diplomacy by the US, China and other nations, led to a cascade of other commitments.

“It was kind of remarkable that by the time the Paris conference started, even before it had begun, something like 185 countries had come forward,” Biniaz said.

“EU-China cooperation in this context becomes more important because it is really the effort to maintain the integrity and the momentum of the international climate effort."

Li Shuo, a senior policy adviser with Greenpeace China, describes international climate negotiations as a tricycle with three wheels. The world’s three largest carbon emitters are China, the US and the EU. As the US steps back, he said, the other two have to step up.

“EU-China cooperation in this context becomes more important because it is really the effort to maintain the integrity and the momentum of the international climate effort,” Li said.

China could make serious new commitments in 2020, Li said. The country is currently on track to beat its pledge under the Paris agreement to peak its emissions by 2030.

Related: Is China really stepping up as the world's new climate leader?

But China’s situation has also changed since the Paris agreement. Domestic politics, including a slowing economy and protests in Hong Kong, may make it harder to commit to ambitious new climate policies. And China is still building new coal power plants.

“It is really going to be a political decision the Chinese leaders have to make in 2020, whether to double down on our current climate targets or not,” Li said.

And, Li said, US actions loom large over China’s decision-making as well as the process as a whole.

“Even if we are able to achieve a successful EU-China outcome next year, we are not going to solve the climate problem, because there is still another hundred-pound gorilla in the room,” Li said. “We need to realize that there is really no solution to the profound challenge of climate change without meaningful participation from the United States.”