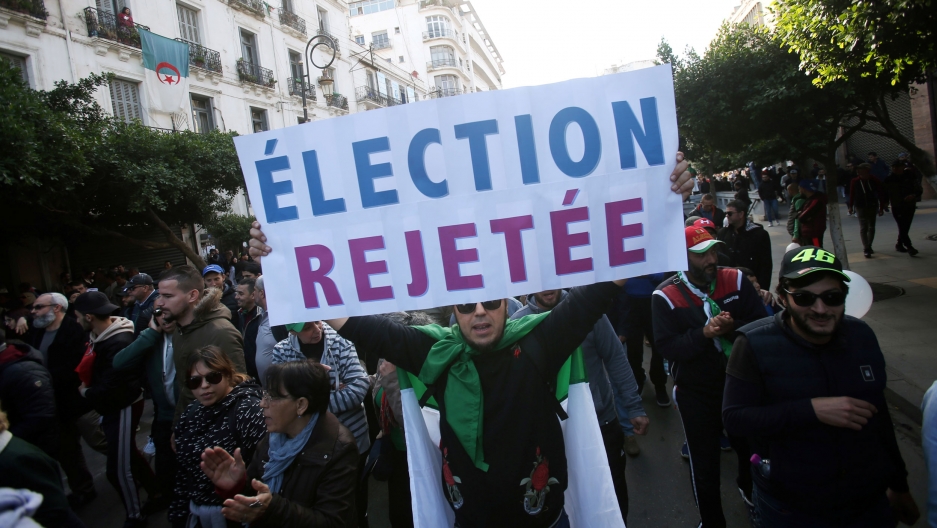 Demonstrators shout slogans during a protest to reject the presidential election in Algiers, Algeria, Dec. 12, 2019.

Thousands of people took to the streets in Algiers and other cities on Thursday chanting "No vote! We want freedom!" as Algerian authorities held a presidential election that protesters view as a charade to keep the ruling elite in power.

In the capital, police rushed the crowd with sticks to disperse the marchers, but fell back as more protesters arrived. One young man of about 25 shouted "We are free!" as a policeman tried to arrest him.

The government has actively censored activists, as well. Artist Abdelhamid Amine, a cartoonist and painter known as Nime, was sentenced to a year in prison Dec. 11 for his caricatures, like one portraying army Chief of Staff Ahmed Gaid Salah fitting Abdelmadjid Tebboune — the authorities' favored candidate — with a golden slipper.

The military-backed government sees the vote as the only way to end 10 months of unrest that brought down veteran president Abdelaziz Bouteflika in April. The demonstrators say no vote to replace him can be legitimate while the old guard still holds sway.

All five candidates that won approval to stand are former senior officials. A second-round runoff will be held if none wins an outright majority.

No result is expected on Thursday, but officials said 33% of registered voters had cast ballots two hours before polls closed. There were no foreign observers monitoring the polls and protesters may dispute official figures.

"Algerians today are saying simply that elections, at this point, are not the solution," said Zine Labidine Ghebouli, a scholar at the American University of Beirut. "The real solution is the democratic transition in Algeria, which is not happening so far."

Ghebouli spoke with The World's Marco Werman about the situation in Algeria, and government crackdowns on artists and journalists.

Marco Werman: Why is it important to understand what is going on in Algeria right now?

Zine Labidine Ghebouli: What's important right now for Algerians is real reforms, rather than basically superficial elections, just to renew the civilian facade of the military junta that has been running the country since 1962, since our independence. When Bouteflika resigned on April 2, Algerians also understood that Bouteflika was only the facade of the actual regime, which is the military junta. And since then, we've started seeing new slogans. Algerians chanted, "We want a civilian government, civilian rule, rather than a military rule." "We want our country to become independent." I think that's why today we're not seeing significant voting turnout because Algerians basically don't trust the system. They want more reforms. They want a dialogue. They want real changes before they go to the voting stations. So, the military is exposed today as the true power holders of the Algerian system. Basically, they wanted to impose an election to renew their legitimacy or to renew their civilian facade. However, Algerians don't want that. They want change.

The protest movement in Algeria is known Hirak. Who makes up this movement and how wide a swath of the population do they represent?

So, if the Hirak protesters in Algeria want to change the system, what do they want instead? What does that look like?

I think that's the question that the Hirak has to answer because the one thing that the Hirak has been unable to do, so far, is to organize itself and provide an alternative. So, for Algerians, there isn't really a clear answer. They think it's about time, and even many factions of the movement started to understand this; there needs to be an organization, a structure of the movement, so that it could eventually provide an alternative road map to the political system.

I mean, it's also interesting that the Hirak is a leaderless movement. Has that affected their momentum or strength, not having an actual leader that the interim government can talk to?

Actually, it helps the movement, especially during the first few months. Just to put you in context, what has been happening — every time there is a political movement, sociopolitical movements or even an economic movement, the system has two ways to respond to it if it has leaders. Either it co-opts the leaders to make deals with them, or it simply imprisons the people, these leaders. So, if the Hirak chose to have leadership during the first few weeks, we most probably would have seen this leadership in jail by now. And that's why it has stayed leaderless. I think we may be seeing in the upcoming months structure of the movement and organization of the movement to basically transform the slogans of "all out" to the real political mechanism.

Zine, you're a scholar in Beirut, as I said, but you're also Algerian. Do you support the protesters in the Hirak movement?

Yeah, definitely. I mean, personally, I feel that this movement has given me back my dignity as an Algerian. Now, I could see that the Algerians are capable of actually making a change. And I'm no longer ashamed of being represented by a man who doesn't speak and who doesn't move. I definitely support them. And think it's time that my generation leads the country.

Related: Is real change happening in Sudan and Algeria?

I'd like to know how old you are just to get a sense of where you are in your life. And are you feeling any desire to go back to Algeria and be part of building this new country?

I'm 23 years old. I left Algeria just like many Algerians because I felt that system is not going to give me anything in life and that they had to move myself abroad so that I could serve my country when time comes. And I would definitely go back to Algeria. I mean, my generation that has left Algeria, especially the youth who are abroad right now, we went abroad only for our country and we will definitely go back to our country once needed. If the movement succeeds, and I'm hopeful about that, I'll most probably be be back to Algeria to help build my country, [and] hope to contribute in the prosperity of my country.

There is an Algerian cartoonist and painter whose name is Nime. He was arrested 10 days ago, and yesterday, he was sentenced to a year in prison. Why is that?

Because, as I told you, throughout the past four to five months, the system has been so intimidated — the system used to intimidate Algerians and now it feels intimidated, so it wants to regain its power of intimidation. And Nime is another case of multiple several political activists. He was an artist and he made some cartoons, some pictures, some portrayals of the military junta. Portraying basically, the chief of staff, the army Chief of Staff Ahmed Gaid Salah, choosing the president, which deconstructs the system narrative that this this election would be fair and free, basically.

And it's a shame, really, that an artist is in jail for something he did. That's the sign of a military dictatorship in place for me.

Have there been other forms of expression that have been censored or cracked down on?

Yeah. Basically, the public media, even the private media in Algeria, is not having any real activists, any real opponents to the system. You're only having the system narrative in the media. Newspapers have been repressed. Journalists have been oppressed, and even we have three or four in jail right now. So whenever you say something against the system, even as a Facebook post, as a tweet — you may probably end up in jail for that. But Algerians have been very creative about their ways of expression. So, they go to the streets with very sarcastic, but also very meaningful slogans against the system. And they think all the intimidation attempts of the regime have only strengthened the movement. Every single time that the movement starts fading away, starts losing its strength, any new statements from the army chief of staff or from other symbols of the system just gives the momentum back to the movement. And I think after 10 months, there is no way that this movement is going to be intimidated, even through violence.

What is the best, most sarcastic slogan against the system you've seen? Is it translatable?

Actually, there are several. But the one I really liked was in July. It was basically the beginning of summer vacation and somebody just came in shorts, swimming shorts and everything. He basically sat on the street, holding a sign. And he said, "The beach is the street and I'm staying here." So, that was hilarious for me because he basically preferred to work for his country rather than enjoy his time.