A flourish of red and green flags and giant multicolored buses marked the arrival of Colombia’s Indigenous Guard to Bogotá to take part in a third national strike last week. They were greeted by cheering supporters, surrounded by murals of Che Guevara and other deceased left-wing leaders at Colombia’s largest public university, where they were being hosted.

Strikes and protests in the Andean nation have been ongoing since November 21. Although the government has been keen to stall matters until the Christmas period hoping activist fervor will eventually die down, more than three weeks have passed so far, with protesters seemingly still standing strong. 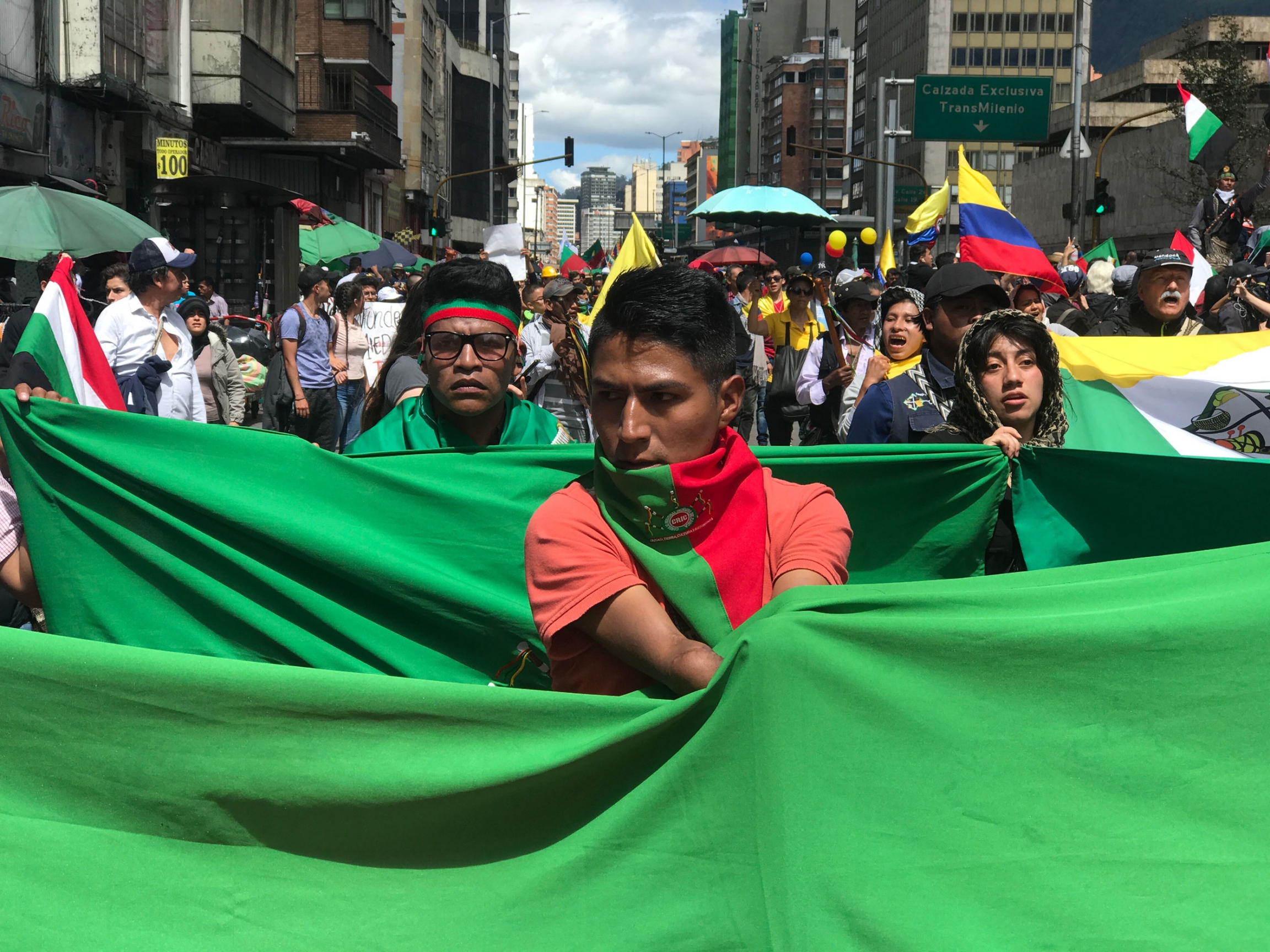 An Indigenous man who lost both arms in an electrical accident as a child carries the red and green banner of the Regional Indigenous Council of Cauca along the streets in downtown Bogota during the most recent national strike on December 4.

The Indigenous Guard is a community protection network made up of women, men and children who defend their territories without weapons. It originated in Colombia’s violent southwestern Cauca region, and in 2001 it began to operate as an organized force.

Most Indigenous Guard from Cauca are from the Nasa Indigenous group — the biggest, most organized of the groups — who have trained other communities throughout Colombia over the years to defend their own territories. Their main purpose is to protect their ancestral lands from armed groups who want to take control of it. 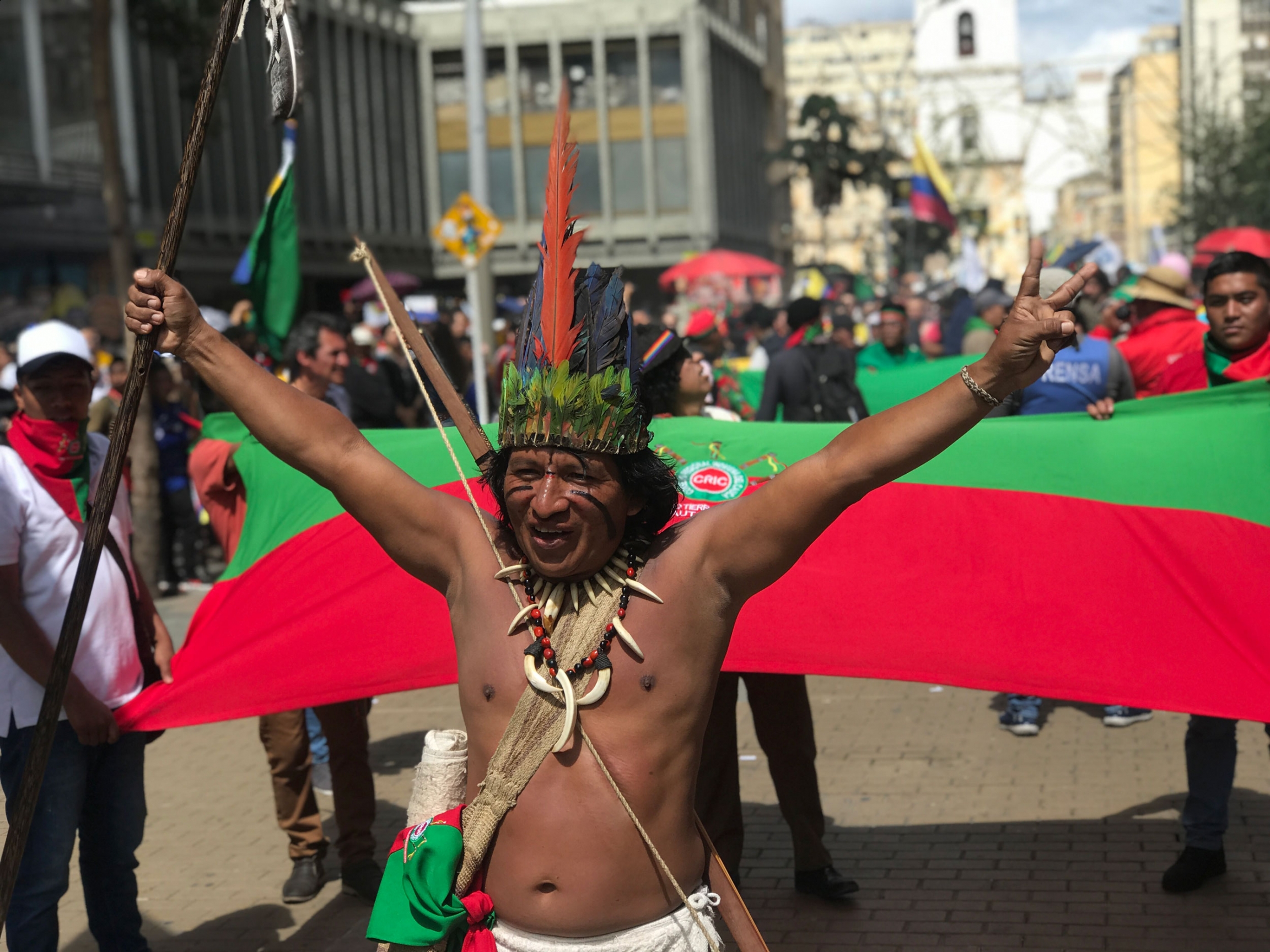 David Taicus, 40, marches toward Bogota’s main square on Wednesday, Dec. 4 in the third National Strike since Nov. 21. Taicus traveled for 12 days to get to Bogota to support the strike, walking and then using canoe and speedboat for the rest. He is part of the Awa Indigenous group, deep in the Amazon. In the background the Indigenous flag is being carried by members of Cauca’s Indigenous Guard.

In 2016, Colombia signed a peace agreement between the previous government of Juan Manuel Santos and the Revolutionary Armed Forces of Colombia (FARC), ending a bloody five-decade-long conflict that left 260,000 dead and millions displaced. The current government, led by Ivan Duque since 2018, has been internationally criticized for its weak implementation of the peace deal.

As the FARC disbanded and left rural areas they used to control, power vacuums opened and other armed actors moved in, vying for control of the valuable land for illegal mining or coca production — the base ingredient for cocaine — many on Indigenous territory.

The Guard and other Indigenous groups from all over Colombia traveled to Bogotá last week to take part in the third national strike. Protesters have wide-ranging demands — including that the government do more to stop the murder of human rights activists; support former leftist rebels and dissolve the riot police, accused by marchers of using excessive force. For many, it was their first time in the capital and also a chance to interact with members from other groups.

But they all had one common message for the government: “Listen to us.” 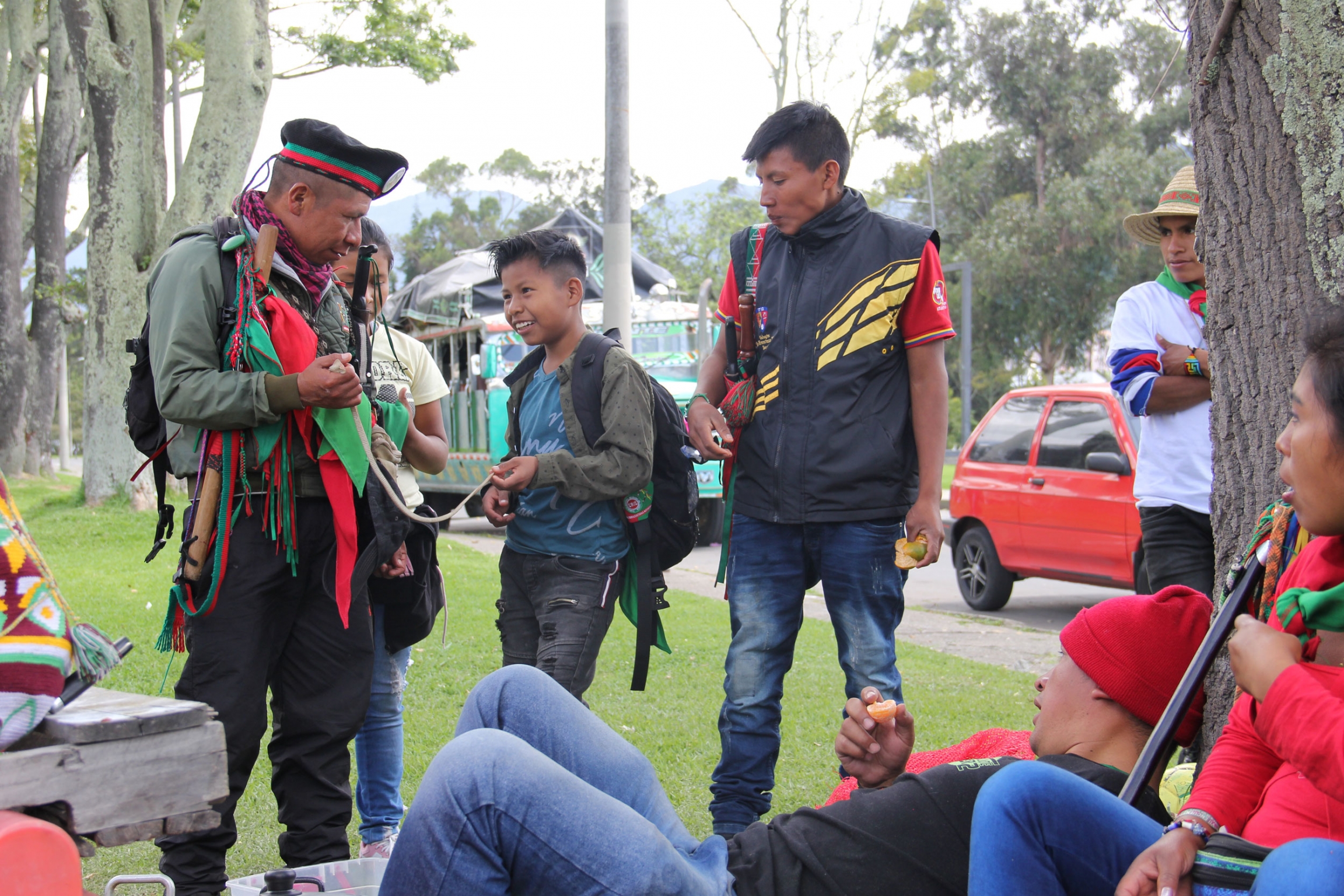 Jose Albeiro Camayo speaks to a young member of the Nasa community on the grounds of Bogota’s National University while other Guards watch on. Almost 1,500 members of the Indigenous community camped at the university during their visit, sleeping in tents and cooking on open fire. Around 800 of them were part of the Indigenous Guard.

Jose Albeiro Camayo, 39, coordinator of the Indigenous Guard in Northern Cauca, has had five attempts against his life for defending his territory. Right-wing paramilitaries, left-wing guerrilla groups and drug gangs want control of their territories to expand illegal mining and coca cultivation.

Camayo says he’s survived five attempts against his life. In October, paramilitaries kidnapped, tortured and interrogated him. He was found tied to a tree with barbed wire around his hands and neck.

The Indigenous Guard do not bear weapons. Instead, they each carry a baton to represent their allegiance to the collective; a machete to trek through dense forest terrain; and a two-way radio to stay in constant contact with their comrades.

“We never use guns. The day we start doing that is when we lose our vision of defending land and life,” Camayo told The World. 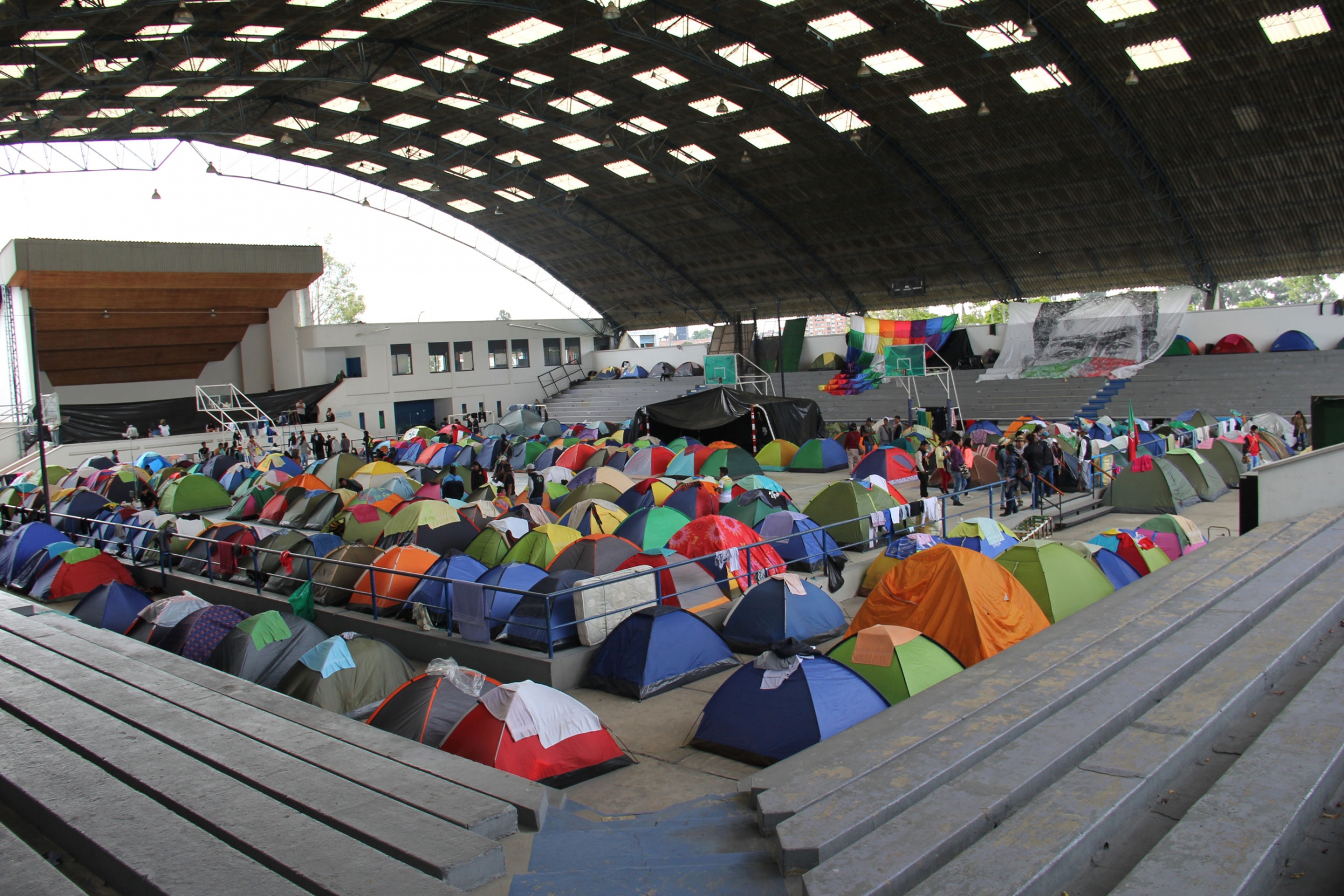 A stadium at Colombia’s National University, where just some of the Indigenous visitors stayed during their visit to attend the National Strike in Bogota. Many were in the capital for the first time, and found the sprawling city of over 10 million people daunting. 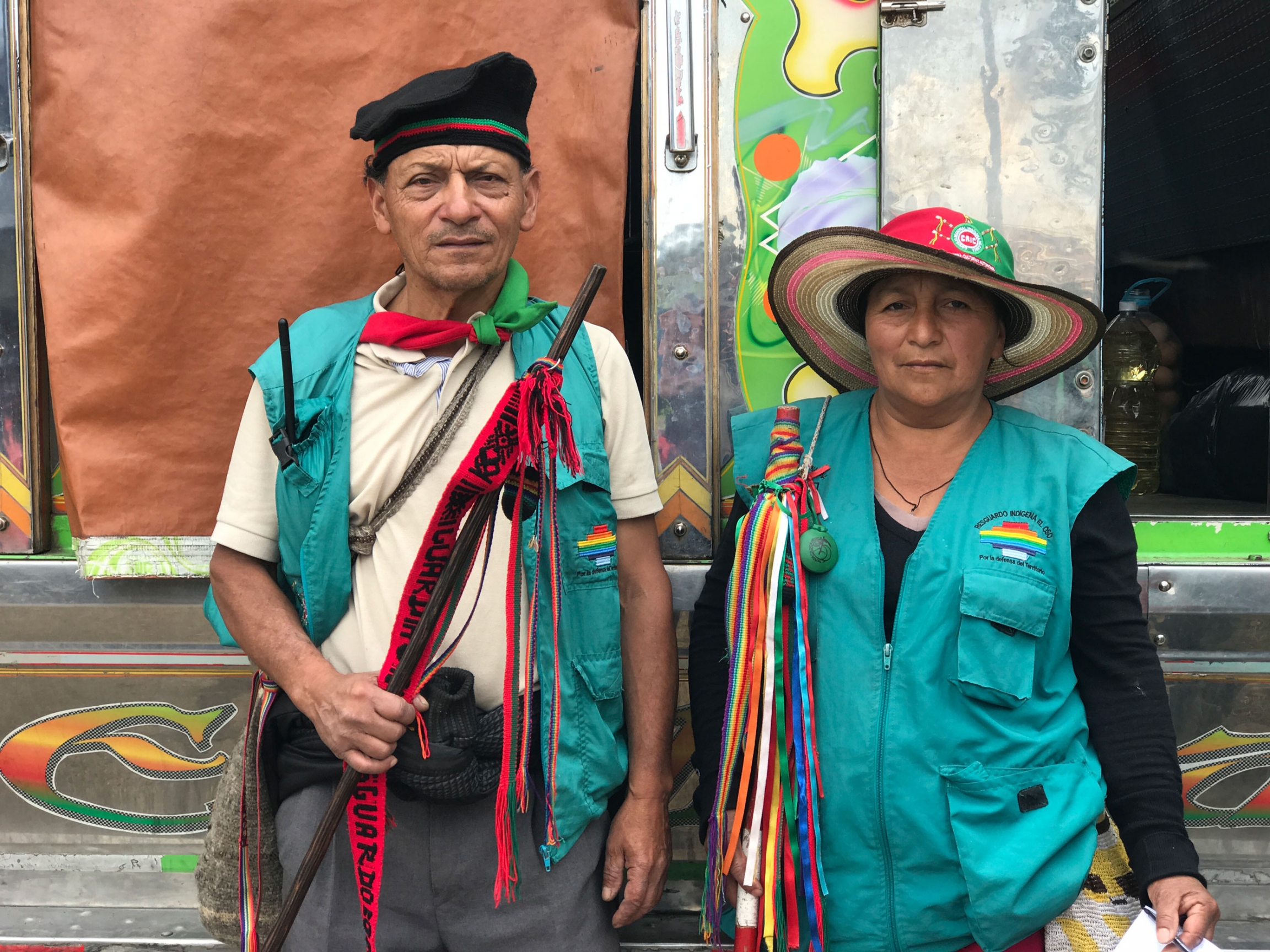 Rigo Gomez, 57, has been in the Indigenous Guard for 27 years and his partner Angelica Gimenez, 50, for 10 years.

Rigo Gomez and his partner Angelica Gimenez, who are from from southern Huila region, came to Bogotá to demand rights for Indigenous peoples.

“It was great that it was a peaceful march,” Gimenez said of Wednesday’s national strike, in which they took part. “We hope he [President Duque] listens. He hasn’t fulfilled his role. That’s why we’re here, to demand our rights.”

Gimenez said the reason she is part of the Guard is to defend her people's territory, lives and the environment.

“We’re always defending, but in peace and coexistence,” she said. 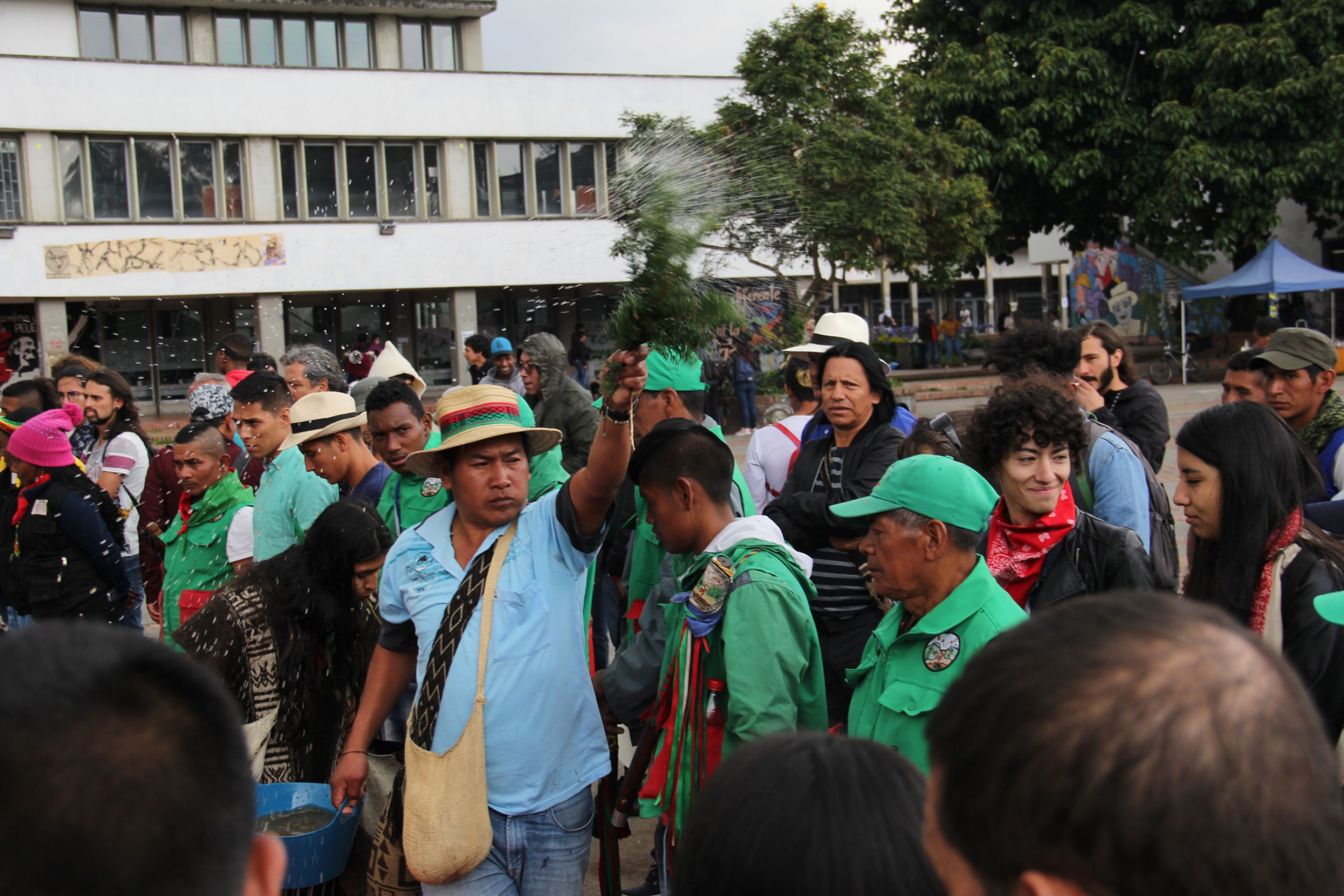 An Indigenous man uses a handful of rosemary to splash water on members of other indigenous groups in a cleansing ceremony. Afterward, a file containing records of Indigenous victims of Colombia’s armed conflict was handed over to the Special Jurisdiction for Peace (JEP) — the transitional justice mechanism set up as part of the 2016 peace agreement to trial war crimes.

“Red is the blood spilled from our comrades killed in the struggle. White is peace. Green is for the defense of nature, and black represents the grief for those lost,” said Jaime Camacho, an Indigenous leader from Huila. 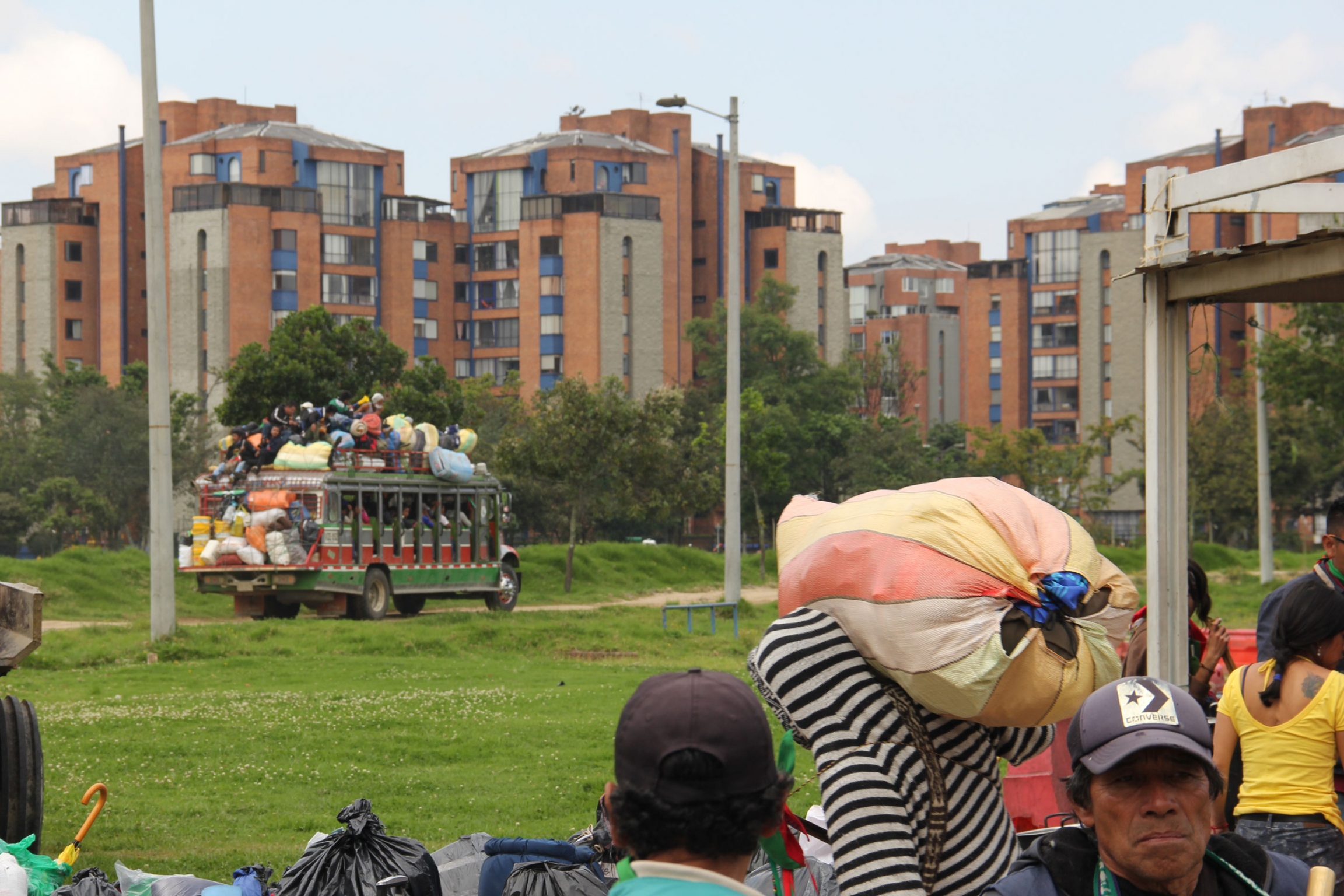 After hours of packing, one of the final chivas sets off on the 15 hour ride back to Cauca. People are crammed inside and even sit on the roof for the arduous journey.

Several Indigenous people participating in the marches told The World they will return in greater numbers in the coming year if the government does not agree to direct dialogue with them.