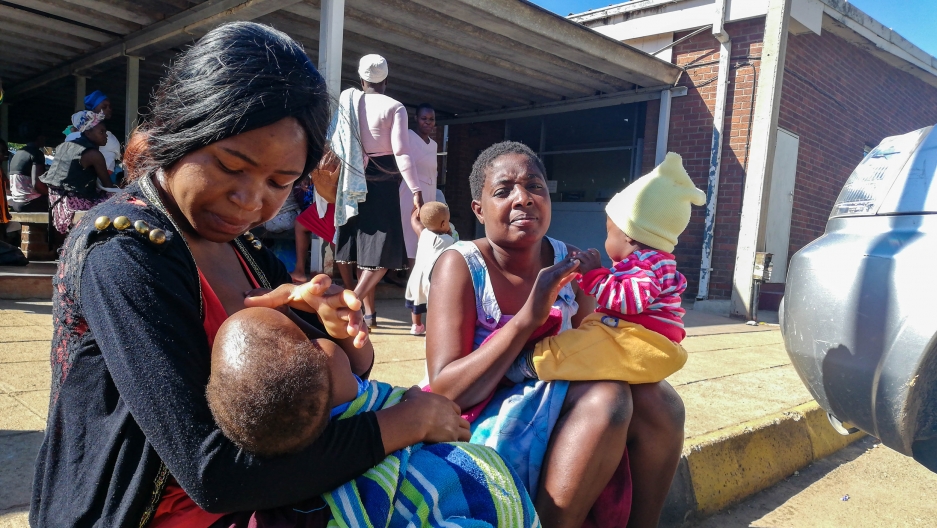 Mothers in Zimbabwe with their babies arrive at local clinics in Harare, the capital, for their children's vaccinations and spend hours there, hoping striking nurses may assist them.

On Dec. 3, 2019, Everjoyce Juma gave birth to her first child in a "backyard" maternity ward in Harare, Zimbabwe’s capital — after being turned away by weary nurses at her local public clinic.

In September, over 500 doctors under the banner of the Zimbabwe Hospital Doctors Association (ZHDA) went on strike over poor working conditions and inadequate salaries, but it wasn’t until last month that nurses in Harare joined them — further crippling Zimbabwe’s already deteriorating health sector.

As a result of the strike, free public hospitals like Edith Opperman Maternity (EOM) Hospital, where Juma intended to give birth, have been severely understaffed or shut down. Newborn babies and their mothers are literally paying the price, as more pregnant women turn to informal, illegal maternity wards, when they cannot afford medical care at private hospitals.

“I went to the clinic and they told me I should seek help at a private hospital as the pregnancy was challenging. ... My husband is self-employed and I am unemployed, so, we could not afford to go to a private clinic.”

“I went to the clinic, and they told me I should seek help at a private hospital as the pregnancy was challenging,” she told The World, anguishing in pain while nestling her baby girl.

“My husband is self-employed and I am unemployed, so we could not afford to go to a private clinic.”

Juma headed to see Esther Zinyoro, an untrained traditional birth attendant (TBA), 72, who has run a backyard clinic at her home for four years. While common in Zimbabwe, TBAs have little to no professional medical training and tend to work out of their homes. Since November, Zinyoro has been overwhelmed by the number of pregnant women who seek her services after Zimbabwe’s nurses went on strike to demand better wages.

Juma spent two days in labor at Zinyoro’s clinic. No tests were done to check Juma’s HIV status, and no medical records were provided for post-natal care — as would have been routine in a professional medical setting. In total, the birth cost Juma’s family the equivalent of $20 in US currency.

The day before Juma delivered, Zinyoro said 16 women had come to her clinic after being turned away from EOM Hospital. She assisted all of them. 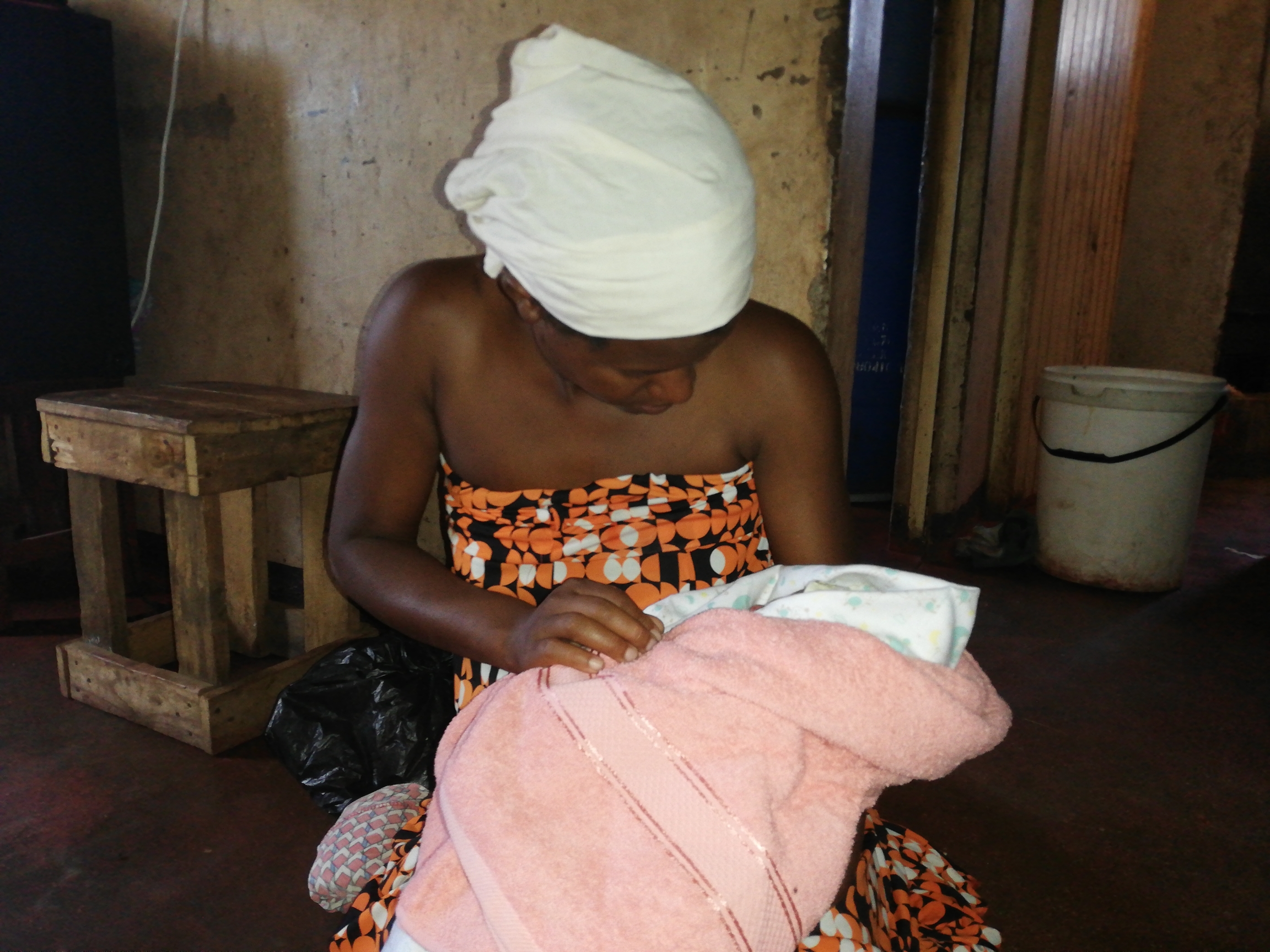 Everyjoyce Juma looks at her baby girl a few hours after delivery at a "backyard" maternity ward in Harare, Zimbabwe, Dec. 3, 2019.

Dr. Prosper Chonzi, the director of City of Harare Health Services, the local health department, said he was not aware that the few nurses remaining at EOM Hospital were turning away pregnant mothers.

“It is functioning well, and nurses in other clinics will be back soon,” he told The World.

A midwife at EOM Hospital, who wished to remain anonymous due to fear of reprisal, said they were supposed to refer pregnant women, including those with health complications, to a bigger hospital, Harare Central. But only a few doctors have been working there since the strike began, so they advise women to “seek help elsewhere,” she said.

Zimbabwe’s economy has plummeted since President Emmerson Mnangagwa took power in 2017 from his mentor, the late Robert Mugabe, through a military coup, affecting service delivery in every sector.

Related: Running out of US dollars, Zimbabwe says it will print its own 'bond notes'

Citizens cannot access their own identity documents and passports. The health sector has not been spared, with shortages of essential resources and staffing in maternity wards. In most public hospitals and clinics, midwives ask pregnant mothers to bring their own razor blades, gloves, rubbing alcohol and lights, amid mass power outages and shortages across the country.

The Mnangagwa-led administration has responded to the doctors’ and nurses’ strike with force, accusing the strikers of pushing for regime change. The government fired over 400 doctors for misconduct midway through last month and recently reversed its decision. Instead, it ordered the doctors back to work within 48 hours. Only 46 returned while hundreds remain “in the trenches.”

Juma’s experience echoes that of many pregnant women and newborn babies who are suffering from the deterioration of Zimbabwe’s public health sector and can’t afford the fees of a private clinic.

Giving birth at private hospitals costs the equivalent of $288 in US currency, which is beyond the reach of many as most civil servants earn an average of $28 per month.

The Zimbabwean dollar has been rapidly losing its value against its benchmark, the United States dollar. On the black market, the local currency is currently trading at 1:21 against the US dollar, according to traders in Harare interviewed by The World. The official rate is lower, trading at 1:15 against the US dollar. The former British colony’s inflation rate stood at 300% as of August 2019, according to the International Monetary Fund.

A professional association for midwives, the Zimbabwe Confederation of Midwives (ZICOM) believes backyard maternity wards threaten to reverse the gains made toward reducing maternal and neonatal morbidity and mortality rate in Zimbabwe.

“Maternal death rate is an internationally-monitored indicator reflective of a nation's socio-economic development. If we lose lives of women and newborns for whatever reason that takes us back in ages we long passed."

“Maternal death rate is an internationally-monitored indicator reflective of a nation's socio-economic development. If we lose lives of women and newborns for whatever reason, that takes us back in ages we long passed,” said Emmanuel Mahlangu, ZICOM's president.

“We recommend institutional deliveries. The risk of childbirth going wrong any minute is too high. The leading cause of deaths worldwide is bleeding during childbirth, labor taking too long and rupture of the woman's uterus. Specialists battle with such risks every day. There is a risk of infections from the use of traditional herbs and dirty equipment, in a dirty environment. It's a definite no for non-institutional deliveries.”

Mahlangu said 85% of pregnancies are normal and can be managed by midwives, but doctors are critical for complicated pregnancies.

“About 10% of pregnancies need specialist obstetrician care following complications in pregnancy. Such cases are managed at referral hospitals. The absence of doctors and specialists at such hospitals is detrimental to the provision of care,” he said.

The southern African nation’s maternal mortality rate is estimated to stand at 651 deaths per 100,000 live births, according to the Zimbabwe Demographic Health Survey. United Nations Population Fund (UNFPA) states that “even though the trend in the last 5-10 years shows a decline, the ratio is still unacceptably high.''

Dr. Fortune Nyasha Nyamande, spokesperson for the Zimbabwe Association of Doctors for Human Rights, said the strike poses an existential threat to the health of pregnant women, and it disrupts access to antenatal, delivery and postnatal care with huge implications on morbidity and mortality rates related to maternal health.

Nyamande said maternal health interventions such as early antenatal appointments, prevention of parent-to-child transmission programs, deliveries supervised by qualified health personnel, and post-natal care and monitoring are all rendered unavailable by the continued failure to meet the demands of doctors and nurses.

Skilled care before, during and after childbirth, can save the lives of women and newborns, said Itai Rusike, executive director of the Community Working Group on Health.

He said poor quality of care remains an issue for maternal and child health services in the public health institutions during the strike. He worries that the prolonged impasse may result in the reversal and erosion of gains achieved in the elimination of mother-to-child transmission of HIV and syphilis.

“Zimbabwe is committed to eliminating mother-to-child transmission of HIV and syphilis by 2022. The targets set in the plan are to attain 95% antenatal and neonatal care attendance, 95% antenatal care testing for both HIV and syphilis and to reach 95% of HIV-positive pregnant women with antiretroviral therapy and treat 95% of syphilis-positive mothers and infants with penicillin. Unfortunately, all these services can not be offered by a TBA during home delivery,” he said. 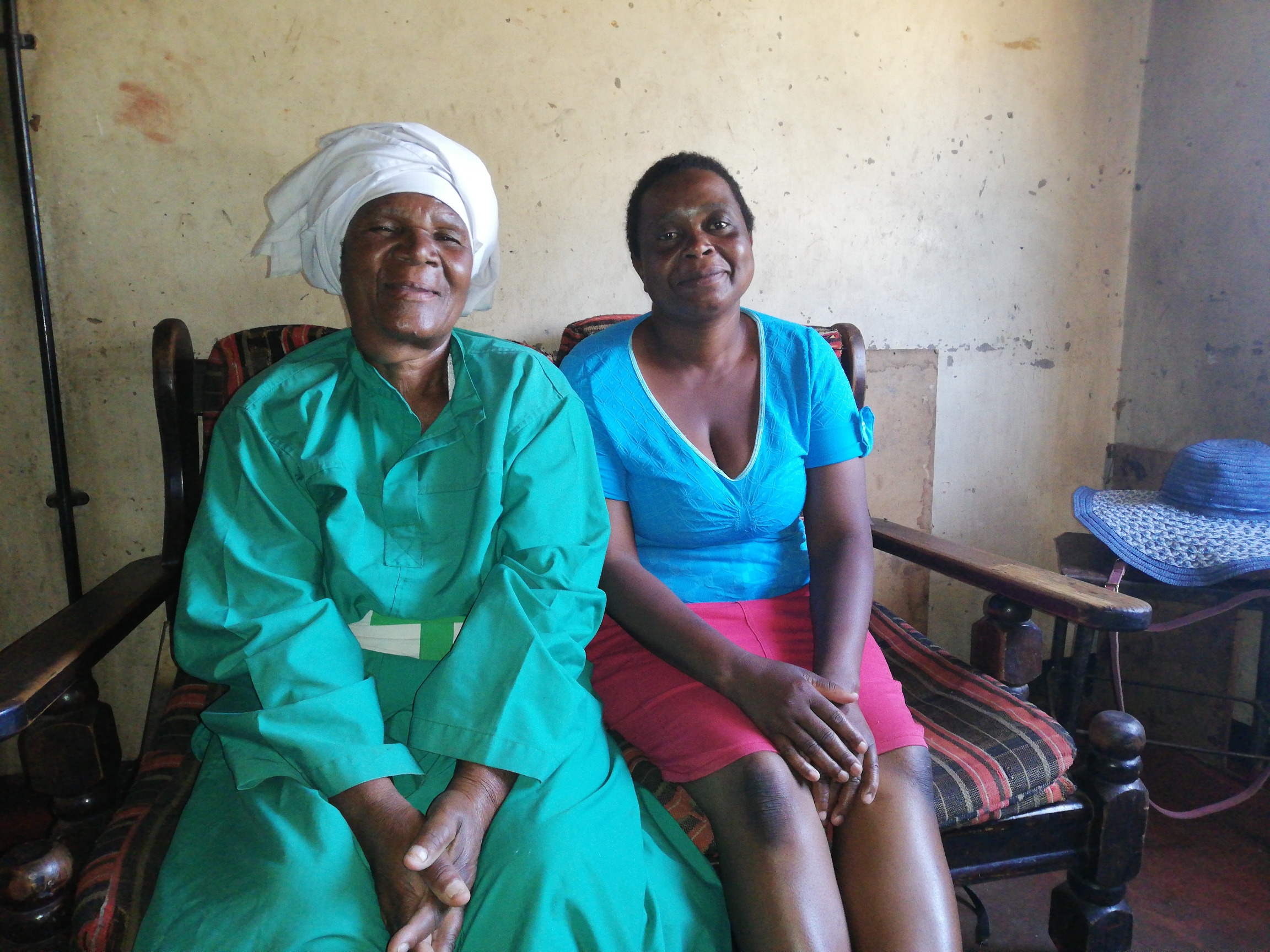 A traditional birth attendant, Esther Zinyoro, (left) helps pregnant women who are being turned away from clinics who deliver at her home in what's known as "backyard" maternity wards.

As unborn and newborn babies and their mothers continue to pay the price for this gap in health care, doctors and nurses are piling more pressure on their employers.

However, the government holds firm on salary adjustments. “The only currency we equate our wages [to] is the Zimbabwean dollar. We have a decently strong currency,”  Ndavaningi Mangwana, information ministry permanent secretary told The World.

There seems to be no lasting solution to the maternal health crisis in sight.

“We want our salaries not to lose value and we are open for dialogue with the government,” said Dr. Masimba Ndoro, vice president of ZHDA.

As for Juma, now at home with her week-old baby girl, only time will tell how the two fared in that tiny, two-room maternity ward.