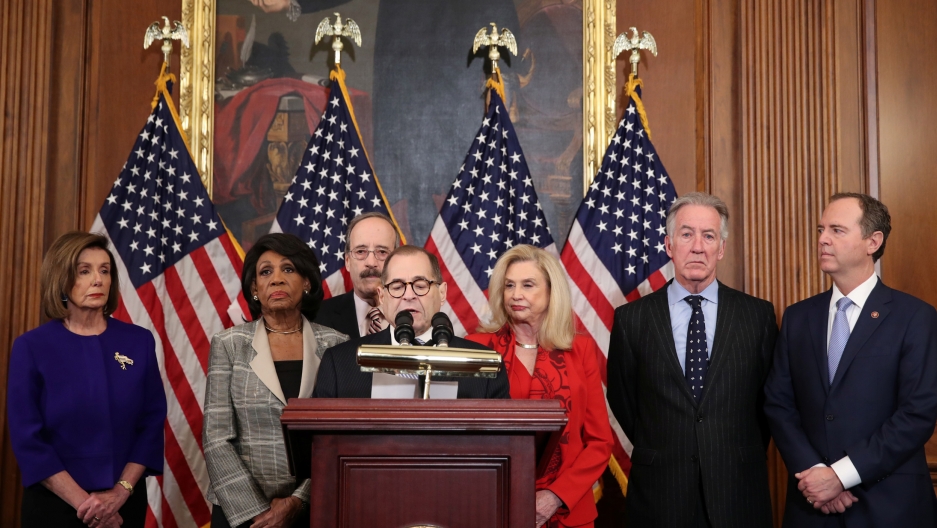 Democrats announced formal charges against President Donald Trump Tuesday that accuse him of abusing power and obstructing Congress, making him only the third US president in history to face impeachment.

The full House of Representatives is expected to vote on the charges, or articles of impeachment, next week. The chamber, controlled by Democrats, is almost certain to vote to impeach the Republican president, setting the stage for a dramatic trial in the Republican-controlled Senate, likely to begin in January.

House Judiciary Committee chairman, Jerrold Nadler, told reporters that Trump had endangered the US Constitution, undermined the integrity of the 2020 election and jeopardized national security.

"No one, not even the president, is above the law," Nadler said.

Democrats accuse Trump of abusing the power of his office by withholding aid to Ukraine, vulnerable as it faced Russian aggression, as well as dangling a possible White House meeting to get Ukrainian President Volodymyr Zelenskiy to investigate a Democratic political rival in the 2020 presidential race.

Jamie Raskin, a Judiciary Committee Democrat, told reporters Democrats have identified two patterns of  misconduct by Trump: "Bringing in foreign governments into our politics in order to corrupt our elections" and "working to cover up this kind of misconduct by blockading witnesses, withholding evidence and trying to stop people from testifying."

Trump has denied wrongdoing and calls the inquiry a hoax. The White House has refused to participate in the hearings in the House because it says the process is unfair.

Pelosi launched the impeachment inquiry on Sept. 24 after a whistleblower reported concerns over a July 25 telephone call in which Trump sought help from Zelenskiy to investigate former Vice President Joe Biden, a leading contender in the Democratic race to challenge Trump in next year's election.

Democrats say their investigation also shows Trump withheld $391 million in military aid and a White House meeting to get his Ukrainian counterpart to investigate Biden and his son, Hunter Biden, as well as a debunked theory that Ukraine, not Russia, interfered in the 2016 US election.

Republicans argue Trump did nothing improper in his call with Zelenksiy and say there is no direct evidence he withheld aid or a White House meeting in exchange for a favor.

Jerrold Nadler, the Democratic chairman of the House Judiciary Committee, closed the nine-hour hearing on Monday  with a condemnation of Trump's actions.

"The facts are clear. The danger to our democracy is clear and our duty is clear," Nadler said. Trump "constitutes a continuing threat to the integrity of our elections and to our democratic system of government.

"Such conduct is clearly impeachable. This committee will proceed accordingly."

If the House approves the articles of impeachment, the Republican-controlled Senate would hold a trial to decide whether to remove the president from office. A conviction is considered unlikely.