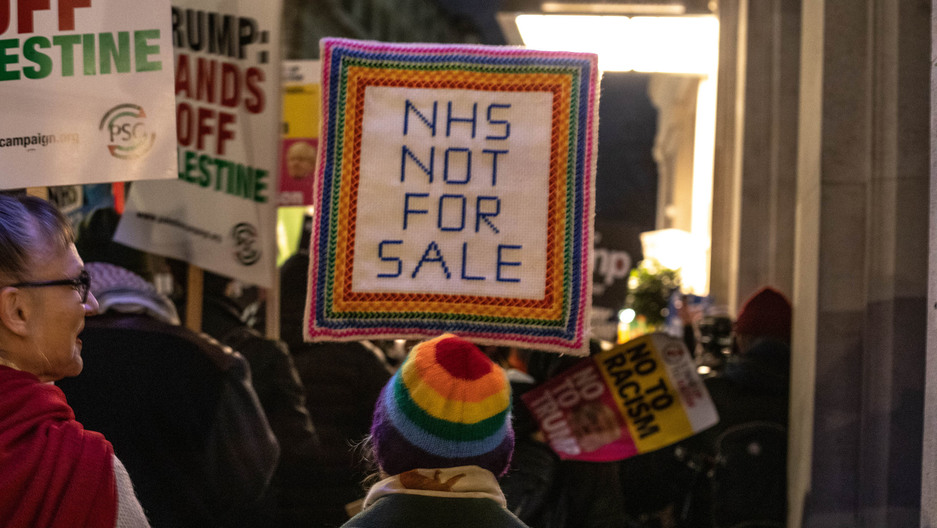 With an upcoming general election Dec. 12 in Great Britain, one of the major issues at the top of voters' minds is the future of healthcare.

Public anxiety is growing over the National Health Service — a national institution that guarantees tax-funded medical care to anyone in the United Kingdom. But parts of the NHS, which began in 1948, have begun to erode in the last decade — funding and staffing have not kept up with the demands.

Still, the NHS is widely seen as an institution worth protecting, despite its imperfections. Marie-Louise Irvine, a primary care doctor of 30 years, is immensely proud of the UK’s National health service.

“Nobody has to worry, ever, about not being able to afford to pay medical bills. If somebody gets cancer, of course, they worry about the cancer, but they don't have to worry about whether they can afford it.”

“Whether you're a very ill, elderly person, or whether you're a young mother, or you’re a child — everybody's entitled to free, universal, comprehensive health care of reasonably good quality and standard,” Irvine said. “Nobody has to worry, ever, about not being able to afford to pay medical bills. If somebody gets cancer, of course, they worry about the cancer, but they don't have to worry about whether they can afford it.”

But Irvine does fear for the program. Some of the concerns about the long-term future of the NHS came to a head this week in a demonstration on Tuesday, Dec. 3, protesting US President Donald Trump, who was visiting London for NATO's 70th-anniversary summit.

In June, Trump suggested that aspects of the NHS may be up for negotiation in a post-Brexit trade deal between the US and the UK.

Some worry that the United States will further erode the NHS by bringing profit-driven business and pharmaceutical interests into the system.

On Tuesday morning, before the demonstration in London, Trump backed off that idea. “If you handed it [the NHS] to us on a silver platter we want nothing to do with it,” he told reporters.

But NHS workers are still wary. “There’s so many of us, nurses, occupational therapists, all kinds of health workers who are really concerned,” Irvine said. She joined other demonstrators outside of Buckingham Palace Tuesday, chanting in a call and response: “Our NHS is not for sale!”

Last week, Jeremy Corbyn, the opposition Labour Party leader, released documents showing the details of trade talks between the US and the UK. A key part of those discussions shows America's desire for its pharmaceutical companies to get into the UK market, to allow them to extend drug patents in the UK.

“The impact of some patent issues raised on NHS access to generic drugs (i.e. cheaper drugs) will be a key consideration going forward,” a lead UK negotiator wrote.

Extending patents would essentially allow the price of a drug to remain higher for longer, and it is something the US has been pushing for in trade negotiations with other countries, as well.

The implication from Corbyn was clear: “Lives will be put at risk as a result of this.”

Britain’s Conservative Prime Minister Boris Johnson, who could lose his position after the election, weighed in the same day as Trump’s visit. Per his party's election manifesto, the NHS is “not for sale or up for negotiation” in any future trade talks, Johnson said.

The UK's medical system stands in stark contrast to the market and insurance-based health care system in the United States, which touts personal choice and being a leader in both medical innovation and quality care. But individuals can shoulder a high price tag for it, with many who get ill facing ruinous financial bills.

Related: Nature therapies can save trillions in health care costs

In the UK, NHS services come at no charge and medicines are highly subsidized. The government controls drug costs and uses cheaper, generic equivalents.

But Mark Dayan, an analyst with Nuffield Trust, a London-based health care think tank, says the public’s fears over the long-term future of the NHS is not just about the US.

“There are some good reasons to worry about medicine pricing and the trade deal with the USA, but you also have to understand the protest against it in the context of wider UK politics,” Dayan said.

Concerns about the future of the NHS are tied up with the start of the Brexit story, in the build-up to the vote to leave the EU in 2016, he said.

“In the actual referendum campaign over whether or not to leave the European Union, the side in favor of leaving the EU made great play of the idea that we could redirect some of the money that we have to pay to the EU as members into the National Health Service."

“In the actual referendum campaign over whether or not to leave the European Union, the side in favor of leaving the EU made great play of the idea that we could redirect some of the money that we have to pay to the EU as members into the National Health Service,” Dayan said.

The NHS is the UK's largest employer with some 1.5 million employees. Its budget has risen more slowly than the wider economy, according to Dayan, with funding increases at about 1.5% a year. That has meant more challenges for patients.

“If it's an emergency, what we're finding now is people are waiting many, many hours in the emergency department,” said Irvine, the primary care doctor. “And even if they’re then considered to be ill enough to be admitted to a hospital bed, there aren’t enough beds for them.”

The pro-Brexit campaign overestimated how much money the UK would gain for the NHS after it pulls out of the EU, but the campaign also showed how important the NHS is to the public. Dayan said in reality, regardless of the US trade talks, the politics of Brexit are sure to have a range of impacts on the NHS.

How those politics move forward could rest on the results of the general election — just a few days away.