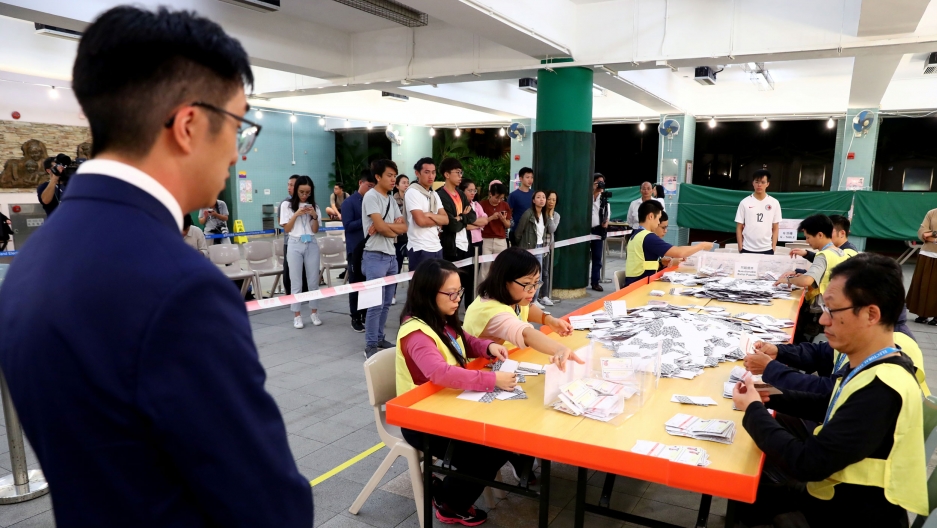 Democratic candidates in Hong Kong secured almost 90% of 452 district council seats in a landslide election victory by opponents of Chinese rule amid months of pro-democracy unrest.

Sunday's poll was held during a rare weekend lull in clashes with police, despite a strongly resourced and mobilized pro-establishment opposition.

"Quite a few are of the view that the results reflect people's dissatisfaction with the current situation and the deep-seated problems in society," Lam said.

The government would "listen to the opinions of members of the public humbly and seriously reflect," her statement said.

The elections saw record turnout after six months of protests and brought upset wins for democrats against heavyweight pro-Beijing opponents, greeted in some voting centers by chants of "Liberate Hong Kong" and "Revolution Now."

While district councils deal with local issues such as transport, their members also form part of the election committee for Hong Kong's chief executive. This could give them some influence over the next vote in 2022, although they only account for 117 of its 1,200 members.

Democratic Party chairman Wu Chi-wai described the election as the first step in the long way to full democracy. "This district election shows that the central government needs to face the demands of a democratic system," he said.

Along with universal suffrage, the protesters' demands include an independent inquiry into perceived police brutality.

The voting ended with no major disruptions across the city of 7.4 million people on a day that saw massive, though orderly, queues form outside voting centers.

"This is the power of democracy. This is a democratic tsunami," said Tommy Cheung, a former student protest leader who won a seat in the Yuen Long district close to China's border.

Hong Kong's most urgent task was to restore order and stop the violence, Geng told a daily press briefing.

In self-ruled Taiwan, which China claims as its own, the Presidential Office expressed "great admiration and support" for the election result.

"The election fully demonstrates Hong Kong people's absolute will to pursue freedom and democracy," it said.

The number of seats held by the pro-democracy camp more than quadrupled and turnout, at 71%, was almost double the number in the previous polls four years ago.

Starry Lee, chairwoman of the city's largest pro-Beijing party, the Democratic Alliance for the Betterment and Progress of Hong Kong, apologized for her party's performance.

"For this major defeat, we do not want to find any excuses and reasons," said Lee. She said the party rejected her offer to resign earlier on Monday. 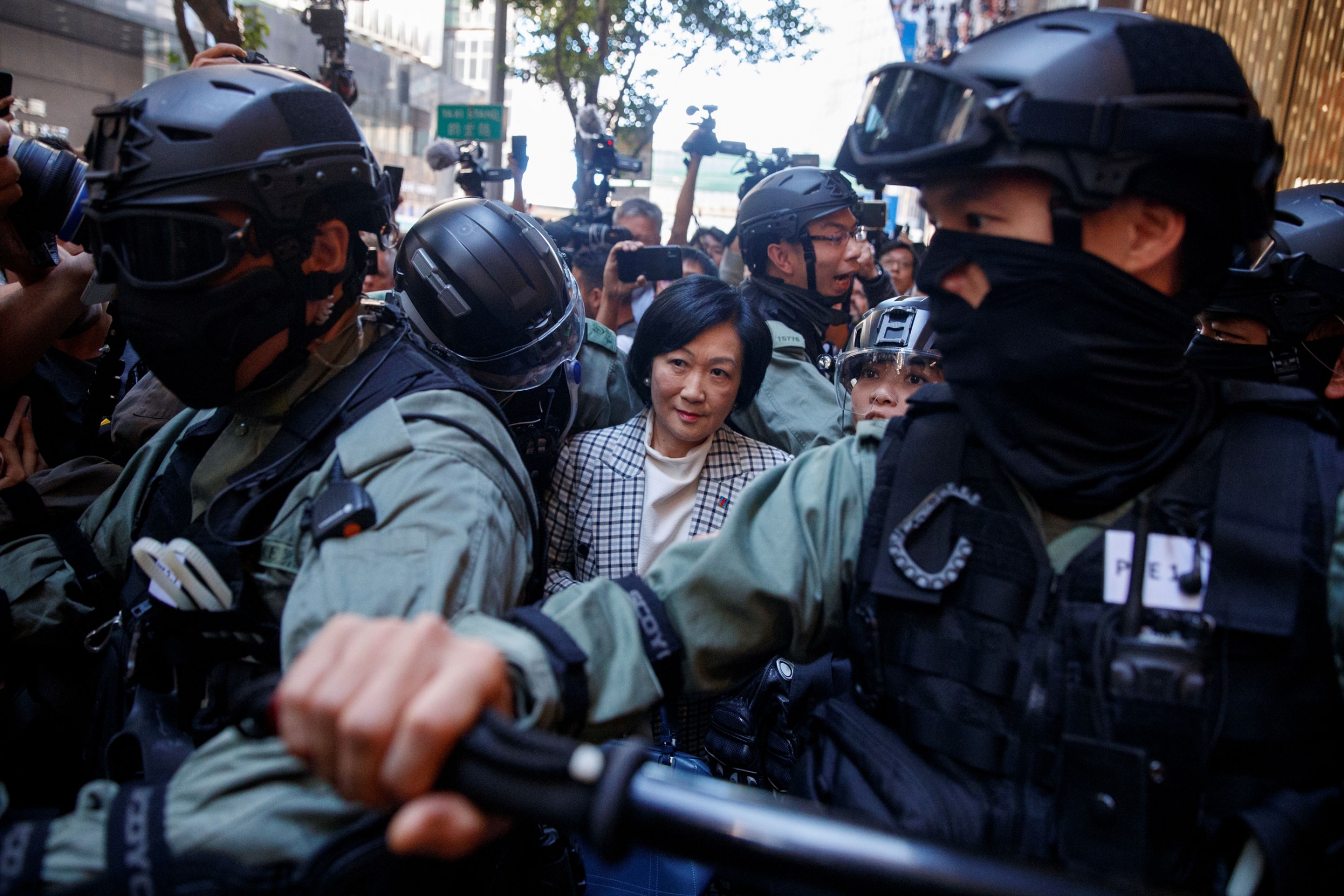 Police escort senior pro-establishment lawmaker Regina Ip after she turned up at an anti-government protest in the Central district of Hong Kong, Nov. 25, 2019.

Former student leader Lester Shum, who won a seat, said district councils were just one path to democracy. "In future, we must find other paths of struggle to keep fighting," he said.

China's state-run Xinhua news agency announced the completion of the election, but did not say which side had won.

"Rioters, in concert with external forces, have continuously committed and escalated violence, resulting in social and political confrontation," it said. "... Months of social unrest have seriously disrupted the electoral process."

Demonstrators are angry at what they see as Chinese meddling in the freedoms promised to the former British colony when it returned to Chinese rule in 1997.

China denies interfering and says it is committed to the "one country, two systems" formula for the former British colony put in place when it returned to Chinese rule in 1997. Police say they have shown restraint in the face of potentially deadly attacks.

Britain said it welcomed Lam's promise to "seriously reflect" on the result.

Jimmy Sham, a leader of the Civil Human Rights Front, which organized some of the anti-government rallies, won his electoral contest, while some pro-Beijing heavyweights, such as Junius Ho, a hate-figure among protesters for his abrasive comments, lost.

Ho described the outcome on Facebook as "an unusual result."

Sham and other democrats entered the Polytechnic University to urge police to end a standoff and allow humanitarian assistance to those few protesters trapped inside in now filthy conditions, with fears rising about their physical and emotional health.

The university is guarded round the clock by riot police, after around 1,100 were arrested last week. Some were held during escape attempts that included trying to clamber down ropes to waiting motor-bikes, with protesters throwing petrol bombs and police responding with tear gas, rubber bullets and water cannon.

There was a small standoff between police and protesters outside the campus on Monday evening, with many shouting "come out" and hurling abuse at police.

The protests started over a now-withdrawn extradition bill that would have allowed people to be sent to mainland China for trial but rapidly evolved into calls for full democracy, posing the biggest populist challenge to Chinese President Xi Jinping since he came to power in 2012.

By Twinnie Siu and Jessie Pang/Reuters