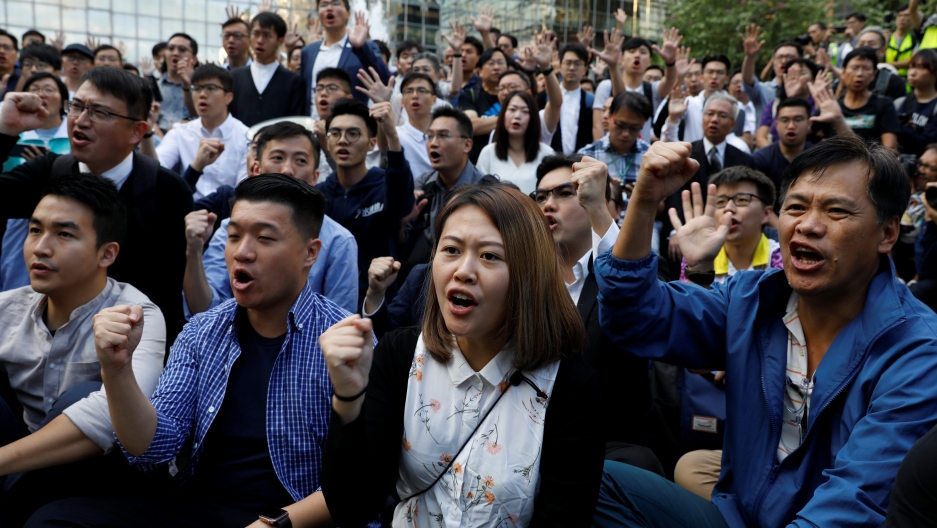 Pro-democracy winning candidates gather outside the campus of the Polytechnic University in Hong Kong.

Hong Kong’s leader, Carrie Lam, said on Nov. 25 that she would listen to public opinion after a landslide election victory by opponents of Chinese rule amid months of sometimes violent pro-democracy unrest.

Democratic candidates secured almost 90% of 452 district council seats in the Nov. 24 poll, held during a rare weekend lull in clashes with police, despite a strongly resourced and mobilized pro-establishment opposition.

Lau explained what this means for the future of the relationship between Beijing and Hong Kong.

Marco Werman: How important was this vote? What's the upshot of the result?

Emily Lau: These councils do not have much power, but if they are united and if they are articulate, they can still influence public opinion and influence government decisions. So, I certainly hope the newly elected members will act intelligently, but with determination — and I certainly hope Beijing will not see them as a threat.

Well, many of the people who won seats on these district councils are young. There are political neophytes. What can you tell us about them? Do you have confidence that they'll be able to steer a path with Beijing?

I don't know. I have already seen commentaries of people saying that. Now, it seems, especially with these young people, maybe many of them have not worked in the district and they just emerged during these last few months' protests. And they may not really be interested in working on this very dry, mundane constituency work and will just shout slogans and be anti-establishment. I certainly hope that they will understand that the voters expect them to serve as an elected member, but of course, to also champion the political causes. But they don't serve forever. Just for four years. And if they perform — and not to the satisfaction of the electorate — next time, it could be the reverse result. And if all you know how to do is chant slogans and go into the council chamber and perform shows, I think the electorate will get tired quite soon. So, it is a very delicate balance. They have to show they have not forgotten the reason why some people voted them into office. But it's not just one reason. There are also demands that they meet the requirements of an elected district councilor.

It did not take very long for China's government to respond to the election results and this rejection of Beijing loyalists. The foreign minister, Wang Yi, told reporters today that Hong Kong will always be ruled from Beijing. He warned against further protest violence. Does that sound ominous to you?

Well, it's like a broken record. But I can assure your listeners that many Hong Kong people understand that we are part of the People's Republic of China. We have the Hong Kong Special Administrative Region, but all these protests in the past months are there to urge the Chinese government to keep its promise under the policy of one country, two systems. That is, to make sure that we continue to enjoy the capitalist lifestyle, the freedoms, the civil liberties, the personal safety, the rule of law, independence of the judiciary, all these things that the Chinese have promised, which should last until 2047, — and hopefully beyond. But now, they seem to be breaking their promises. People are not demonstrating for independence or self-determination. We are just asking the Chinese not to renege on its promise. So, if they say all these rubbish things, I don't think your listeners should really believe them.

The results of this election also present some pretty big dilemmas for Hong Kong's chief executive, Carrie Lam. She's been referring back to what she called a "silent majority" of supporters for one country, two systems. So what are her options now that that silent majority has not materialized?

Exactly. I think most people have spoken. You've got a turnout rate of over 70%, which is very, very respectable by any standard. So, what Carrie Lam should do is meet with the people and come up with responses. They are not giving Hong Kong independence. There is no "color revolution." Please tell Chinese officials who say that to shut up.

You've had a long career in politics. Did you ever think that you would be at this particular moment in Hong Kong's history? Did you think that what we're looking at right now was inevitable?

Well, I always felt that when we're under Beijing rule, you cannot rule anything out. Of course, [there was] the massacre in Beijing 30 years ago. Nobody would have thought that Carrie Lam would come up with the stupid extradition bill. And then when more than a million people protested peacefully, she refused to back down. Her behavior is so baffling. Of course, you say [she's] Beijing-backed and Beijing's behind it. Yes, but I don't think Beijing forced her to do this bill. She's so arrogant and so stubborn, so intransigent and we all know that she's bad news, but we didn't know that she's as bad as this.